Sometimes you have to go back in order to go forward. The Trine series lost its footing with its third entry, as developer Frozenbyte attempted to take the games into the realm of full 3D, but found it to be a surprisingly challenging and expensive prospect. As a result, Trine 3: The Artifacts of Power turned out to be a disappointingly short and simple experience. Thankfully, Frozenbyte is taking the franchise back to its 2.5D roots with its latest entry, Trine 4: The Nightmare Prince.

But, of course, sometimes there is no going back. Does Trine 4 recapture the old magic, or has the series permanently lost its luster? Grab your sword, grappling hook, and wizard’s hat, it’s time to put this adventure through its paces…

Trine 4: The Nightmare Prince once again places players in command of the merry trio of Pontius the knight, Amadeus the wizard, and Zoya the thief, each of which is re-introduced via their own charming tutorial level. Pontius is doing regular chivalric stuff, Amadeus is at a snowy wizard’s retreat, and Zoya is fleecing a fancy party when they’re called together to locate the headstrong Prince Selius, who went missing while tampering with magical forces beyond his control or comprehension. Our heroes find Selius soon enough, but like a typical teenager, he runs off in a huff, uncontrollably manifesting monsters across the kingdom as he escapes. This is definitely the most engaging Trine story to date, although its middle section, which sees our heroes doing chores for a series of cutesy animals, feels like padding.

Trine 4’s story sometimes isn’t captivating as it could be, but its visuals always are. The game takes the series’ traditional lush, colorful storybook look to the next level with more subtle lighting, a greater feeling of depth, and a wider variety of backdrops. You’ll travel over and through snowy peaks, warmly-lit cities, murky castles, picturesque birch forests, and much more. This is one of the best-looking games I’ve played this year, full stop.

If you asked me to succinctly sum up what it was like to play past Trine titles, I’d say they were good to great puzzles games, but so-so platformers. Thankfully, Trine 4 changes that, as it largely does away with the floaty, finicky physics of earlier entries in the series in favor of tighter controls. The three main character’s powers are largely the same as before, with Pontius doing the fighting and reflecting things with his shield, Amadeus conjuring those all-important boxes, and Zoya shooting arrows and grappling. Each character has a new trick or two that that add some depth to the puzzles – Pontius can now create replicas of his shield, Amadeus can conjure iron balls, and Zoya can levitate objects and make rope bridges – but none of our heroes truly feel reinvented. That’s okay though, as Trine 4’s puzzle design still stands as the series’ best, despite the lack of major innovation. Frozenbyte does a fantastic job of guiding players toward the solution without providing explicit hints. The level of challenge is just right.

As before, you can play Trine 4 on your own or via local or online co-op, although this time as many as four people can team up. Playing solo is a bit more challenging, while co-op allows you more opportunity to “game” the puzzles, provided you can coordinate with your friends as they bounce around the screen trying to find solutions on their own. Both approaches have their charms.

Unfortunately, while Trine 4’s puzzles are as satisfying as ever, fighting enemies is still kind of a drag. Frozenbyte claims to have improved combat, and indeed, the characters are a bit more versatile and the bad guys are more varied, but for the most part, it's still easiest to just switch to Pontius and hack and slash as fast as you can when enemies show up. I’d love to see enemies more naturally integrated into the levels and puzzles in future Trine games – as is, they just feel extraneous.

The one time combat actually shines is during the game’s boss fights, which are significantly improved over past games. You’ll face off against a giant wolf, evil sorceress, rival knights, and more, with each boss feeling like a tricky puzzle in its own right. If I had a criticism, most of them are designed around a single character’s abilities, making your co-op partners feel a touch useless. That said, the bosses are a clear highlight of the game – frankly, I wish there were more of them.

Trine 4 serves up a properly meaty a 15-hour adventure, with another 5 to 10 hours for those who want to collect all the experience orbs and other treasures scattered around every stage. At only $30, Trine 4 is a ball of twine worth unravelling.

This review was based on a PS4 copy of Trine 4: The Nightmare Prince provided by publisher Modus Games. 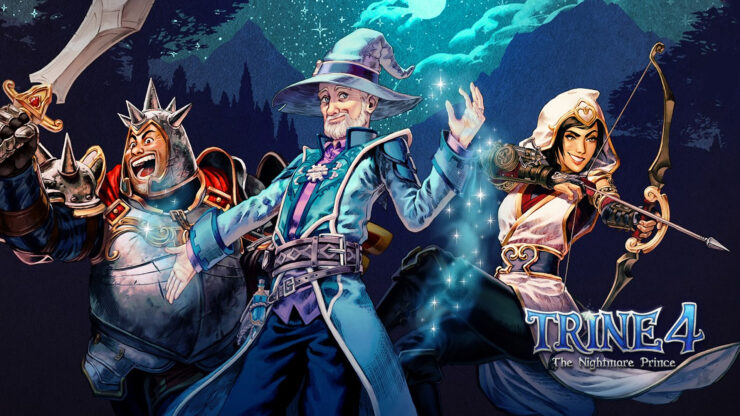