It is usually complicated to mash different video game genres together. Many have tried over the years, but most have failed. It literally required a trial of fire, and plenty of time in Early Access, for one developer to accomplish a truly remarkable feat: create a role-playing game mixed with elements from tactical-turn-based, deck-building, and roguelike that is not just fun to play but also incredibly accessible for all sorts of players.

The odds couldn't have been stacked worse for Trials of Fire. Roguelikes aren't known for being accessible games, and adding role-playing game features on top was a recipe for disaster. And while some of the role-playing game mechanics aren't particularly deep, there's no doubt that developer Whatboy Games managed to masterfully blend them with features from different genres to create an incredibly engaging mix that many will enjoy for a very long time. 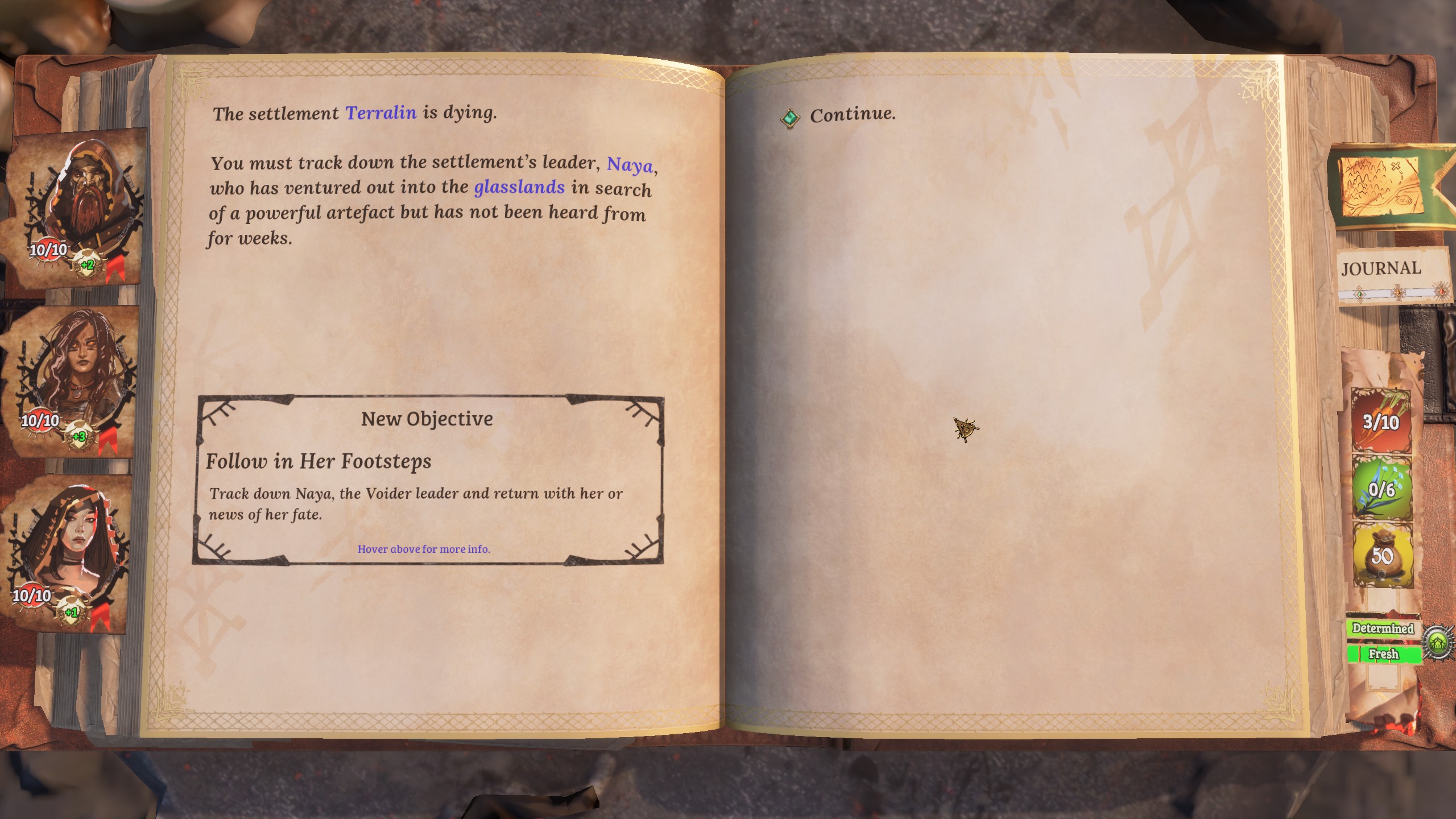 Trials of Fire is set into a fully realized fantasy world, complete with deep lore, multiple races and factions, and a story developed in storybook fashion with a very well-written narration. The world doesn't feel exactly original, to be honest, as it features the most common fantasy tropes around. Still, the high-quality storybook narration makes it feel a little better than it actually is. Additionally, the many quests and narratives have different outcomes, depending on the choices players make, so Trials of Fire almost feels like a proper role-playing game: just do not expect to be blown away by any major twist because there are none.

The heart of any roguelike is its gameplay mechanics. In this regard, Trials of Fire delivers an extremely polished experience that feels unique, despite its mish-mash of different genres. For starters, players have full control of how they want to experience the game. Trials of Fire features different campaigns that can be completed in around a couple of hours, ranging from the main Lore Quests to the Daily Challenges, campaigns with some specific modifiers, Combat Runs, campaigns focused on combat, and Seasonal Sequences that feature multiple modifiers for the ultimate challenge. Among them, the Lore Quests can be customized in several ways, as players can decide on the size of the campaign, the party members, and the difficulty.

Once a campaign has been selected, players will be transported on a procedurally generated overworld map featuring multiple points of interest, an indicator that highlights the location to reach to move the main quest forward, and a variety of enemies. Despite the storybook-inspired visuals, campaigns in Trials of Fire manage to feel like authentic journeys, thanks to mechanics like Morale and Fatigue that influence the combat performance of the three party members. The points of interest are also incredibly varied, ranging from villages to ruins, caves, and all sorts of dungeons, which all feature events with different outcomes and even skill checks in the vein of tabletop role-playing games. By completing events properly, players can receive rewards like new gear, potions, materials to upgrade gear and food. The latter is crucial, as it is needed to set up camp to restore Fatigue and even heal characters. 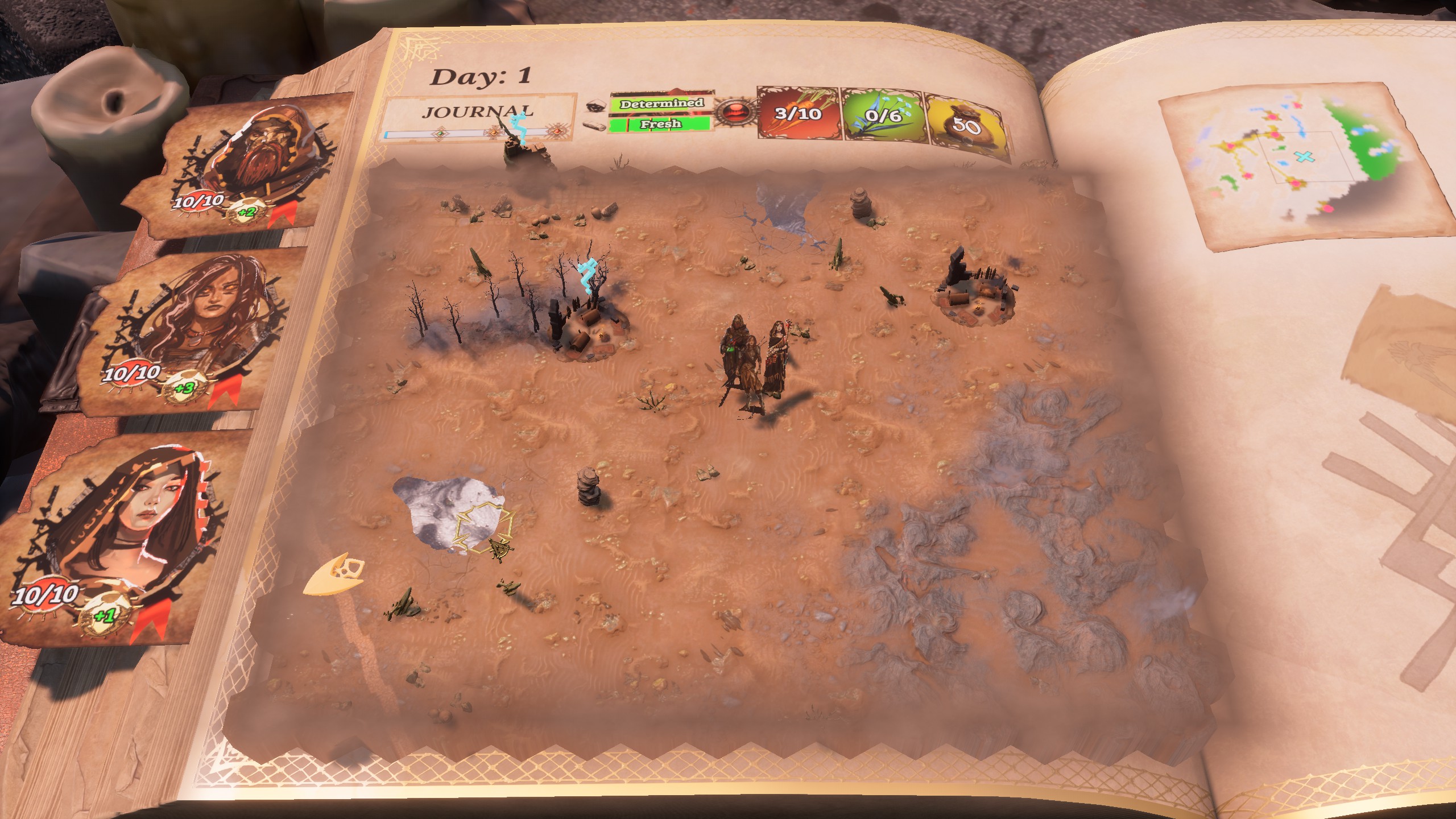 By engaging in specific events or encountering an enemy on the map, players will be transported in a combat area divided into hexagons. It's during combat that Trials of Fire shines the brightest, as fighting enemies is challenging yet fun and extremely engaging, thanks to the unique combination of turn-based and deck-building mechanics.

All characters in the game, from the starting Warrior, Hunter and Elementalist classes to advanced ones that need to be unlocked by completing various tasks, come with unique abilities that are represented by different cards. At the start of every turn, players will draw three cards for each character, cards that can be used to unleash all sorts of abilities ranging from melee, ranged and magical attacks, and passive buffs. All these cards come with a specific value that represents the amount of Willpower needed to activate it; to gain Willpower, players need to recycle cards or activate special cards like Advance that grant a unit the ability to move and receive additional Willpower at the same time. This peculiar risk-reward system holds incredible depth, as it lets players attempt all sorts of strategies: it is possible, for example, to sacrifice all the cards of a specific unit to gather the Willpower needed to let another unit unleash multiple attacks. Or, if the situation seems dire, to sacrifice most of the cards without playing any to build up armor to resist an enemy assault. The possibilities are truly endless, and the game does its very best to make every strategy viable, although boss battles do feel a little unbalanced, with the scale clearly tipping in favor of the AI in most cases. Adding even more depth to the experience are the procedurally generated battle arenas, which feature different obstacles that can be used to the player's advantage and different hazards that can damage units located on specific hexagons. 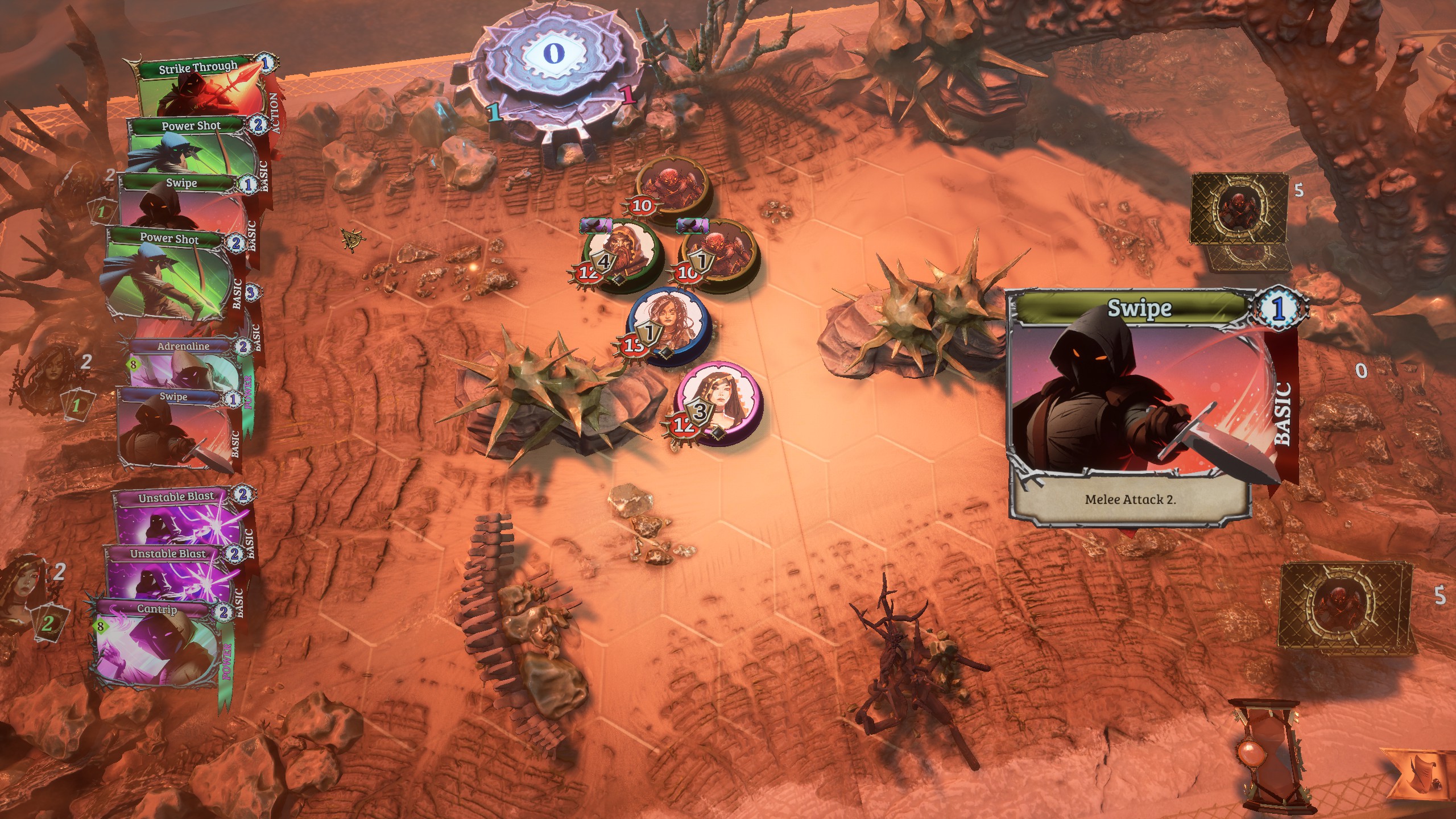 Upon level up, it is possible to power up any card already in the deck or replace any with a brand new one. The abilities tied to the cards are all instrumental, allowing players to diversify their builds in many different and effective ways. The Hunter class, for example, is great at both long-range and melee combat, letting players come up with builds that better develop either or make the class a jack-of-all-trades. The possibilities are further expanded by the gear system, which lets players equip a variety of different items that grant access to additional cards.

However, being a roguelike, all progress made during a campaign will be lost upon completion or defeat. This doesn't mean that players do not get a reward for their hard work, as every time a run ends, the classes that have been used see their Soul Level increase, unlocking new cards in the process, which open more customization possibilities and increase the chances of any campaign to be successful.

As already mentioned, Trials of Fire features a storybook presentation that works and looks great, with high-quality artwork bringing characters to life. Cards also feature some colorful artwork to represent the abilities that look quite good, despite not being on the same level of quality as the characters. Despite the straightforward presentation, combat also looks pleasant, thanks to an attention to detail that is not usually seen in similar games: pins are beautifully animated, and you can almost feel the impact of the attacks, also thanks to some simple yet nice looking special effects and appropriate sound effects.

Trials of Fire stayed in Early Access for quite some time, but it did pay off in the end. Whatboy Games released a very polished title that masterfully combines different genres while being accessible at the same time. Due to the roguelike mechanics that govern progression, those who do not like seeing all their hard work disappear will probably get put off by the game. Still, every player with even a passing interest in roguelikes, RPGs, deck-building, and turn-based tactical games will find plenty to like in Trials of Fire.

Trials of Fire is an amazing blend of RPG, turn-based, and roguelike mechanics that manages to be both deep and accessible at the same time. With a great storybook presentation, tons of different options to customize the experience, and the multitude of builds made possible by the great deck-building system, even those with a passing interest in roguelike and role-playing games will find plenty to like in the game.