The Legend of Heroes: Trails of Cold Steel II

The Legend of Heroes: Trails of Cold Steel II picks up right from the cliffhanger ending of the first game, with Rean Schwarz and his classmates from the Thors Military Academy getting scattered all over Erebonia following a heinous betrayal which causes the whole nation to be engulfed in a civil war. Rean will have not only to find his missing classmates again but also put an end to this conflict once and for all.

Having to travel in a country at war, The Legend of Heroes: Trails of Cold Steel II features a different tone than its predecessor, which featured a school setting. While the tone is definitely darker, the most gruesome events of the war don't happen on screen, leaving them to the players' imagination. Like in the previous game, the story focus is split between characters' relationships and their evolution and the events at large, making the whole world feel alive and believable, in true Trails series' fashion. Named NPCs are also back with their own stories, and a collection of books provides additional details on Erebonia and the whole Zemuria continent.

What makes The Legend of Heroes: Trails of Cold Steel II story slightly better than its predecessor is how unpredictable some of the events are. Without spoiling anything, there's a particular part of the story when it seems like everything is over, only to introduce some new elements that force Rean and his friends to continue their journey. Unfortunately, pacing issues are still in the game, with the middle of the story dragging considerably. Additionally, the game features huge amounts of text, even for a JRPG, so those who never liked the verbose approach of the rest of the series will not change their minds with Trails of Cold Steel II.

The Legend of Heroes: Trails of Cold Steel II is better experienced after having completed the first game, as the very beginning spoils some major events from the previous title, but it's still possible to start playing straight from the second game without missing some basic knowledge of previous events thanks to the backstory menu, which provides a variety of summaries, character profiles and so on. It's still not like experiencing these events first hand, but it's definitely better than nothing, especially for those who have no intention of playing two huge JRPGs one after the other.

Gameplay wise, The Legend of Heroes: Trails of Cold Steel II is not much different from its predecessor. Like in many classic JRPGs, players will move from one location to another as the story demands, talking to NPCs, finding secrets, exploring dungeons and fight enemies. The game's battle system is almost identical to the first game's one, a turn-based system where certain turns come with bonuses, like a guaranteed critical chance, increased experience or sepith gain after battle and so on. Players are still able to link characters in battle and enjoy bonuses depending on the Link level, including some new, extremely powerful skills. Among the additions to the battle system is also an Overdrive mechanic, which allows players to take an extra turn while in danger, something that sadly doesn't happen too often, as the game is somewhat on the easy side even at the normal difficulty level. If you're looking for a challenge, it's recommended to start the game at the Hard difficulty level.

The other big gameplay addition is an airship customization system, which allows players to recruit former Thors students to add a variety of features to the vehicle, such as shops and more. A welcome diversion, but hardly anything game-changing.

The character customization system has also changed little since the first game. Crafts and S-Crafts, special attacks, are learned by simply leveling up, while spells, known as Arts, require players to carefully arrange Quartz on the Arcus, a grid-like system and an evolution of the Orbment system of the Trails in the Sky games. Special Quartz types are also in again, providing additional abilities which are enhanced by leveling the Quartz.

Like the PC port of The Legend of Heroes: Trails of Cold Steel, the port of Trails of Cold Steel II is very well crafted. Upon starting the game, players can choose to access the configuration tool, which includes a vast array of graphics settings such as Shadow Resolution, Distance, Casters, and Filtering, Ambient Occlusion HBAO+, unlimited draw distance, high-quality DOF, High-quality glow effect. The best feature of the configuration tool is that it allows players to instantly check how changing the settings affect the image quality without having to start the actual game. The tool also allows for full controls customization, including Dual Shock and Xbox controller icons, Turbo Mode and Auto-Saving tweaking, and skipping Startup Logos. The latter may not be needed all that much this time around, as the game also includes a feature that more JRPG should include: a quick start option which loads the latest save file.

With every setting at High or above, The Legend of Heroes: Trails of Cold Steel II on PC manages to look much better than it ever did on PlayStation 3 and PlayStation Vita. Still, the game still shows its age, so don't expect to see the most impressive graphics of the year. The soundtrack, on the contrary, is still as glorious as ever: the new main battle theme may not be as catchy as The Glint of Cold Steel, but it still gets the job done.

The Legend of Heroes: Trails of Cold Steel II is a more than worthy continuation of the story of Rean Schwarz and his classmates from the Thors Military Academy. Even without any major gameplay change, the game still manages to be incredibly gripping, thanks to an excellent story and a slightly better pacing, which sadly worsens in the middle point of the story.

Review code provided by the publisher. You may purchase the game on Steam. 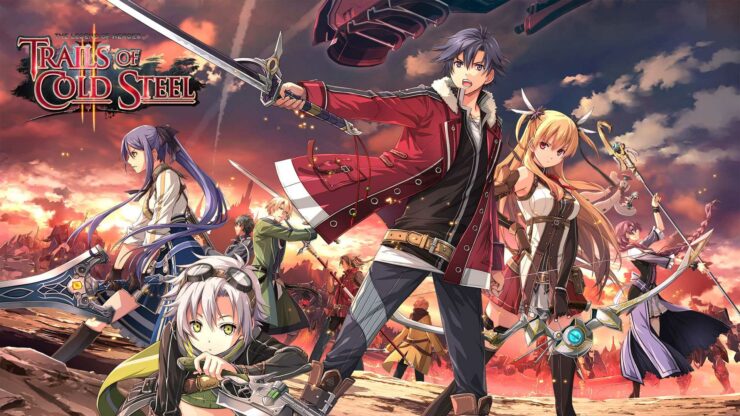 The Legend of Heroes: Trails of Cold Steel II is an excellent JRPG and a more than worthy continuation of the saga, thanks to a gripping story, well-developed characters, and engaging battle system. While the gameplay experience hasn't changed much, with only some small enhancements to the battle system and an airship customization system, the game manages to be slightly better than its predecessor, mostly thanks to some interesting and unexpected plot twists and a story that doesn't end in a huge cliffhanger like its predecessor. Highly recommended to all JRPG lovers