The Legend of Heroes: Trails Of Cold Steel

If there's a JRPG series that's managing to innovate the genre without straying too far from its roots it's The Legend of Heroes series. With the Trails in the Sky arc having finally come to an end in the West with the release of The Third a few months back, Falcom and XSEED are giving PC players the chance to see how the series has evolved with The Legend of Heroes: Trails Of Cold Steel, originally released in North America and Europe a few years back on PlayStation 3 and PlayStation Vita. While some of the new mechanics don't exactly shine for innovation, their sum makes the game an incredibly entertaining experience, at times even more entertaining than the Trails in the Sky games.

The Legend of Heroes: Trails Of Cold Steel takes players to another area of the Zemurian continent, the Erebonian Empire Estelle, Joshua and their companions had to fight in the first two Trails in the Sky games. Main character this time around is Rean Schwarzer who enrolls in the Thors Military Academy alongside many other cadets. Rean and select other students, however, get picked to become part of the new Class VII, a special class where its members come from different social backgrounds, something unthinkable in the Erebonian society where classes are extremely important. The different backgrounds of the main characters make some of their interactions interesting right from the start, giving them a very definite, albeit a bit tropey, personality that makes them instantly recognizable. The usual excellent writing also makes it so that their growth during the course of the game feels natural and believable. Rean is the clear star of the show, but the other members of Class VII are equally interesting, especially once players get to know their personal stories better.

Truth be told, The Legend of Heroes: Trails Of Cold Steel's actual story isn't its strongest suit. The game is quite slow paced, and it takes a while for things to pick up... only to be left hanging, as several important plot points are resolved in the sequel. Like Trails in the Sky First Chapter, Trails of Cold Steel is all about getting to know the main characters and the Erebonian Empire, which is far from being the evil empire it looked like in the previous games.

Unlike the Trails in the Sky games, which are as traditional as it can get, The Legend of Heroes: Trails Of Cold Steel tries to innovate the formula slightly without straying too far from the series' roots. Using a school setting for the game, Falcom took advantage of it to build most of the mechanics. During the course of the game, players will have to take exams showing their knowledge and combat expertise and take part in a variety of different school activities, such as helping the Student Council and more. Players will also get plenty of free time that can be spent with fellow classmates to learn more about them and unlock more battle options that are part of the new Link system. Both the school activities and the relationship systems are extremely reminiscent of the last three entries in the Persona series, so they really won't feel unique to those who played the popular Atlus developed games. Thankfully, these mechanics mesh well together, so they don't feel tacked on just to take advantage of a popular trend in JRPG. Additionally, the way the relationship system has been implemented, it's impossible to max out the relationship with all classmates, so at least an extra playthrough is required to do so, giving players an incentive to play through the game again.

With the Thors Military Academy being the central hub of the game, The Legend of Heroes: Trails Of Cold Steel's progression system is slightly different from past entries in the series, with characters taking part, as already mentioned, in different school activities. The most interesting of them are the field trips which take Rean and friends all over the Erebonian Empire, allowing them, and the player, to understand more of the land and its inhabitants. Other activities include exploring an old building and completing a myriad of sidequests. Sadly, most of the sidequests aren't terribly exciting, only providing a minimal character development or world building pay off.

If there's an area where The Legend of Heroes: Trails Of Cold Steel is a definite improvement over its predecessors, it's the combat system. While the system is basically the one used in previous games, with players and enemies taking turns to unleash regular attacks, Crafts, and Arts, having the ability to manipulate turn order with the right ability, it feels better thanks to the new 3D presentation and the ability to skip any action, making battling a faster affair than ever. Special turn bonuses also make a comeback, forcing players to strategize to avoid enemies taking advantage of them.

Character customization also received some welcome changes without revolutionizing the entire system. While Crafts and S-Crafts are learned by leveling up, unlocking Arts requires players to place Quarts on each character's ARCUS, an enhanced version of the Orbment system seen in Trails in the Sky, as they feature a slot for special Quartz types which give each character unique bonuses, such as restoring CPs with each defeated enemy and more, and unlock Arts. These special Quartz types also receive experience points after every battle, making them feel truly different from regular Quartz.

Having been originally released on PlayStation 3 and PlayStation Vita, The Legend of Heroes: Trails Of Cold Steel isn't exactly a great looking game. Characters and locations look decent enough but are far from being the best we have seen this year. Thankfully, the PC version of the game comes with some excellent new features implemented by Peter "Durante" Thoman that make the game look much, much better. Through the configuration tool, players can change the game's resolution, change FOV, tweak Shading and MSAA and even change button prompts, a welcome addition for players like me who use the DualShock 4 controller for PC gaming, and much more. With these features, XSEED has shown how a proper console to PC port should be done. Another addition over the PS3 and Vita versions is more voiced dialogue, which is a definite plus.

The Legend of Heroes: Trails Of Cold Steel continues the tradition of the series with excellent world building and character development, offering an experience that feels slightly more modern than its predecessor's. The wordy nature of the game and its slow pace may turn some people off, but if you're looking for a solid JRPG to play on PC, Trails of Cold Steel is the game to get: the few issues present don't detract from the experience too much.

Reviewed on PC (code provided by the publisher). You can buy it for PlayStation 3 or PS Vita via Amazon. 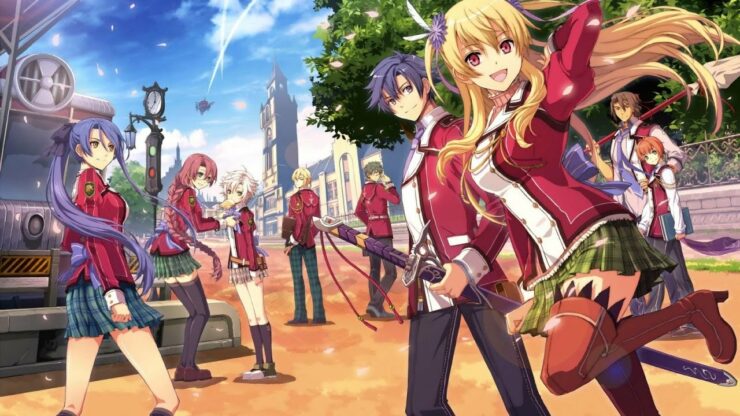 8.0
Wccftech Rating
The Legend of Heroes: Trails Of Cold Steel

The Legend of Heroes: Trails Of Cold Steel takes the best of the Trails in the Sky games and enhances it to new heights. While the school setting isn't particularly innovative, all surrounding mechanics have been masterfully implemented, resulting in a game that's incredibly engaging despite the slow pace and a few other minor issues. Additional, the wealth of PC exclusive features make the game one of the best consoles to PC port ever released.

The Legend Of Heroes: Trails Of Cold Steel III Review – A World of Conflict

Ys VIII: Lacrimosa Of Dana Review – A Wonderful Adventure in A Deserted Island