Back when I first wrote about Total War Saga: Thrones of Britannia I made it clear that my goal was to rule my homeland. By this I mean Yorkshire, or at least the southern part. This means the conquering of the beautiful cities of Loidis (Leeds) and Doneceaster. Needless to say, I gave up on this goal before I even started. Instead, I looked to rule from a position of power on the Isle of Man as the Dyflin.

Of course, this is Total War. Those familiar with the series won't find anything too far out of the norm in your method of expansion and consolidation. This is still a title where military conquest goes hand in hand with the trials and tribulations of diplomacy. Will you stick to your allegiance to one faction and join in a war against another? How will you deal with an Ally who is slowly but surely expanding and surpassing you? Total War has always been a game of emergent storytelling. Total War Saga: Thrones of Britannia has features that only expand on this.

What is different about Thrones of Britannia from other total war titles is an increased focus on storytelling and events. This is partly as a result of events that occur throughout your campaign. Some of these are only mentioned in passing, your ability to influence is non-existent. However, others that occur within your scope of influence can direct yours and other factions. Viking factions on the shores of Ireland are being consumed by the Gaelic factions, what do you do? Shore up and support them or take them for yourself? Maybe you're in the north of England and one faction is eyeing up a neighbour, do you interfere or not? Choosing not to interfere early could very easily place you against an overwhelming foe.

Outside of external threats, Thrones of Britannia also places you at risk of internal conflicts. Much like the loyalty system featured in previous Total War titles, you have to combat the waning loyalty of your generals here. Fortunately, they are fairly easy to satisfy. Find them somebody to marry, throw them an estate and maybe even bribe them if you have the money. It may cost you some influence here and there, but I've fortunately never had a family member or general rebel, yet.

Which is fortunate because there's a lot more work seems to have gone into character progression. Initially, it seems a lot simpler, with levels giving retinues. The more you level one area of a character, the more proficient they become. For example, adding a champion will increase the command ability of a general. A scribe, on the other hand, will increase his ability to govern. If they're feeling somewhat disloyal, you could always give them a priest or find them a suitable wife.

More than that, the people are a lot more responsive to your actions and decisions than ever before and are based on a few aspects. One such aspect is War Fervour. During a campaign against another faction, early victories will elate the population. They'll be happy for more and more, expecting the victories. Even with victories comes the fatigue. They'll tire of seeing their loved ones and friends marching off to war, some never to be seen again. Happiness inevitably suffers.

It's this happiness that proves to be one of the more challenging aspects of Thrones of Britannia. Certain structures, like a church, can increase the happiness of your people. However, others - particularly intensive work-related buildings - lower happiness in greater proportion. Finding a balance can be very difficult and it does mean that there's no way that I've found of making a province some sort of resource powerhouse.

Even technology has taken a twist for the unusual. No longer can you simply research any technology right away. Now you have to perform specific actions before you can even think about improving the tech. For example, you need to have actual lain siege a few times - successfully I may add - before you can even think about researching improved siege weaponry. It makes for a much more organic progression of your empire. Focus on military aspects and your soldiers and weaponry will see a marked improvement whereas the technology of your cities may be inferior to that of another faction.

To change things even further, the way you recruit units is also markedly different. Those you recruit come from a pool that is accessible from any of your settlements. This removes the need for particular unit-developing structures, but has its downsides. When you first recruit your units, they are at mustering strength. Only after a few turns have passed will the unit be totally combat ready. All of these units have particular food (supply) needs also, where your supply and demand is done on a faction-wide scale.

With this limitation on the number of units you have available, as well as the demand for supplies, the campaign requires more forethought than ever before. If you come under attack from a decent force and you haven't got an army ready, there's very little a hastily cobbled together force can do to stop them. Plus the armies further afield, possibly on the attack, can then suffer attrition as the supplies dwindle. As a result of the scarcity, the campaign map has never really felt this tactical.

But what about the battles that these soldiers feature in? There's very little to really differentiate the units. The personalities shine through with their specialities more than anything. For example, as one can expect, the Welsh Longbowmen can devastate from range. On the other hand, the Dyflin have superior axe infantry and access to Beserkers. Of course, these minor variations pale in comparison to those seen in Total War: Warhammer, but it's incredibly well realised and fitting in with the setting.

Possibly the most impressive touch, going back to battles, is the way settlements are shown. No longer is sieging one city very much like sieging another. These settlements have layers and tiers, they're more lifelike than ever before.

And that's where Creative Assembly have really captured their magic. Everything is incredibly detailed, more than any other Total War title before it. This is primarily due to the very narrow focus and setting of the game, of course. There's just something impressive about the tapestry motif of the interface and event popups. The music as well is just perfectly fitting. Though this is something that Creative Assembly has been successful with from day one.

It isn't without its flaws. There's a level of tedium that can set in. Especially later in the game where your only motivation is to achieve the ultimate victory. There's little challenge on easier difficulty settings, even on harder difficulties, some factions are overwhelmingly strong. Despite this, the sleeker, trimmed down Total War experience offers something just a little different from previous titles. This alone, and the quality that comes from every Total War, makes Thrones of Britannia worth it. 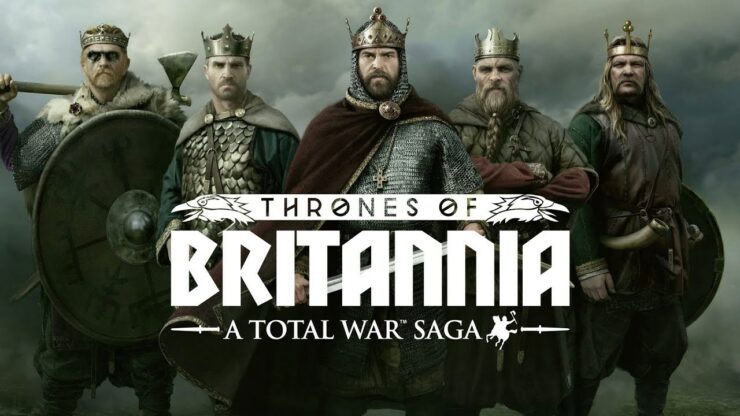 Total War Saga: Thrones of Britannia is a more streamlined, sleeker and quicker Total War than those before it. However, the changes to make it like this offer new opportunities and one of the more tactical campaign maps than ever before. While it still suffers from some issues, like boring end game and being altogether too easy, there's still a whole lot to gain from playing Thrones of Britannia.