The Surge: A Walk in the Park

2017 has seen the release of a couple of action RPGs clearly influenced by From Software's Soul series, each of them offering a different take on the brutally challenging experience made popular by the Japanese developer. While Team Ninja's Nioh brought the experience to ancient Japan, Deck13's The Surge brought it into the future, with robots going haywire, AIs going rogue and so on. The setting isn't the only thing that makes The Surge more than just a Dark Souls clone, as the combat, in particular, manages to be even deeper, with some interesting offensive and defensive options. Everything that makes The Surge so engaging makes a comeback in its DLC expansion, named A Walk in the Park. Don't be fooled by the name, though: exploring CREO World is anything but a walk in the park.

CREO World is an amusement park originally created to celebrate CREO and its mission to make the world a better place. Like the rest of the industrial complex, however, CREO World has been overrun by deranged workers and all sorts of deadly machines, making the place such as dangerous as the rest of the CREO's facilities in the main game. Despite his gruff appearance, Warren isn't one to leave people alone in their time of need, agreeing to help the Operator of a Search and Rescue team who is lost inside the amusement park. This will lead Warren to contend with all manners of dangers to find out if there are any survivors, in which state they are and the true nature of the mission.

Like the main game's story, the plot in A Walk in the Park isn't particularly well told nor original, serving only as a mere backdrop for all the exploration and combat. The hands-off approach to storytelling isn't particularly suited to the game and its expansion, failing to create a true mystery that would compel players to move forward. Thankfully, there are other reasons to play the DLC to completion.

Unlike the rest of the CREO industrial complex, CREO World is a much more open area, filled with multiple paths and secrets to discover. Dangers are also lurking behind every corner, and the enemies taking a walk in the park with Warren are even more dangerous than the ones encountered in the main game. From the robotic mascot patrols to the rogue rescue team members, players will always have to face enemies with great care. Thankfully, Warren's life can be made easier by the new 16 weapons included in the game, new armor sets such as the hilarious mascots' sets and new implants, which open up interesting new customization options. None of these are particularly overpowered, though, so expect to be taken down by a couple of hits if not careful enough.

Aside from the new weapons armor sets and implants, The Surge: A Walk in the Park doesn't include any real new gameplay mechanic, but this isn't a huge issue, considering how good they already were in the first place. Combat, in particular, is as satisfying as ever with the similarities with From Software's Souls series being only one small aspect of it. Sure, players will be moving, blocking and dodging quite a bit when confronting foes, but they also have the ability to duck and jump to avoid incoming attacks and take advantage of a bigger counter-attack window. Perfect blocks, pressing the block button at the exact moment the attack impacts Warren, and perfect strikes, performing the combo while pressing the vertical or horizontal attack buttons at the right time, also add quite a bit of depth to the fights.

As if all this wasn't enough, players will have the option of targeting different body parts to increase the chance of getting the schematics and the required materials to craft the item. Making things even more hectic than the Souls series is the Energy mechanics, which force players to always be on the offensive to make use of Drone Modules and perform an Execution attack, which kills the enemies no matter how many Health Points they have left. All these mechanics and the customization possibilities make The Surge as a whole more than a simple Souls series clone.

CREO World is also a nice change of pace from the rest of the game's locations thanks to its unique visual design, which is way more colorful than anything that can be found in the CREO industrial complex. There's been quite a lot of care in designing the new locations, and I'm sure the team had a blast in coming up with the attractions found in the park and how they have been twisted to make players suffer.

The Surge: A Walk in the Park builds upon the features that make the main game so engaging by offering more of the same challenging experience. Some of the issues of the base game are still present in this expansion, chiefly the less than stellar storytelling, but if you have enjoyed dying over and over to rogue robots you will definitely have fun with this lethal stroll through CREO World. 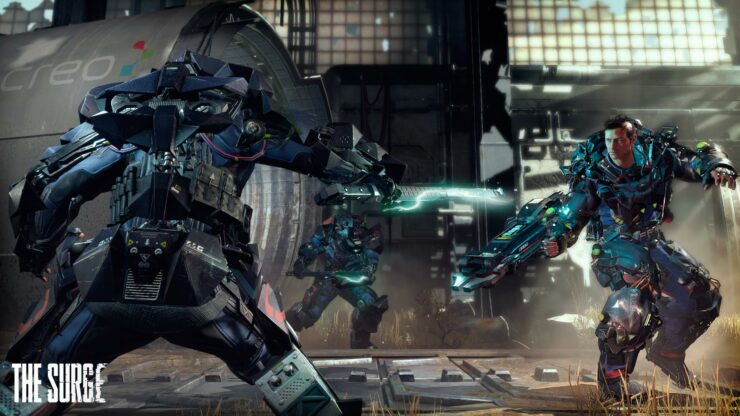 8.0
Wccftech Rating
The Surge: A Walk in the Park

The Surge: A Walk in the Park is a more than worthy expansion to the game, offering new challenges as well as new tools to deal with them. Storytelling may not be stellar, and no new gameplay mechanics have been included, but don't let these issues stop you from taking this lethal walk through CREO World: it's well worth it.