Escape rooms are somewhat of a commonplace activity in modern America. The stakes of being trapped in a locked room for one hour and having to solve a number of interconnected puzzles are rarely ever higher than simply failing the challenge. In The Nonary Games, however, the punishment for failing to succeed usually ends in a swift demise. With an updated release of the first two titles in the Zero Escape series, both 999 and Virtue’s Last Reward are available to both players on Playstation 4 and PC in addition to a portable version on Vita.

As perhaps the only reason to pick up The Nonary Games on the Playstation Vita, the escape room collection contains the definitive release of 999: Nine Hours, Nine Persons, Nine Doors. The original DS release was largely regarded as a cult classic, marred by a number of pacing issues where players had to replay a number of puzzle rooms to reach a new story branch. This was also long before the advent of the flowchart that aided players to keep track of the branching paths. An updated iOS release in 2014 streamlined the experience by converting 999 into a visual novel, but in doing so removed the core feature that made it so unique: puzzles.

With the escape room-style puzzles reinjected back into 999, this updated release contains everything a Kotaro Uchikoshi fan could appreciate. Updated graphics that show off the diverse and eccentric cast, a proper chart to show the choices that the player has taken and of course, over a dozen diverse rooms to escape from. Nonary Games’ puzzle rooms each require a different type mental acuity to escape and even after five years, the challenges still feel fresh. I only wish that I could forget everything I knew about the series and start again with fresh eyes, but at least this is the first time I’ve touched the puzzles in 999 as my previous experience was with the iOS release.

Uchikoshi’s storytelling is known for taking what would otherwise be something mentioned in passing, say perhaps a bookmark that’s picked up somewhere. Through an insane amount of mental gymnastics, that same bookmark is contorted into being an integral piece of evidence to discern one’s motive. Even the sciences and arts are utilized in such a manner that the story is shaped by real world events and literature. If it weren’t for Morgan Robertson’s famous novel, Futility (or more famously: The Wreck of the Titan: Or, Futility), perhaps 999 would’ve taken a much different turn and not been based upon a cruise ship as the location of the first Nonary Game.

The non-linear storytelling behind The Nonary Games is perhaps what makes it work so well. As the player is continually thrust into situations that require taking a branching path, both the lead character and player are subject to unique facts and explanations that help to propel the narrative. While most adventure games would assume the player to be some omnipresent being that knows all, The Nonary Games instead uses that ESP as a plot device and creates a scenario where that transfer of knowledge between story paths actually makes sense. Of course, the player needs to suspend their disbelief while taking part in The Nonary Games to make it all come together, but the story delves into pseudoscience and real world history and twists them together in a story unlike any other. Repeated playthroughs are recommended, as the stories in The Nonary Games change dramatically depending on the doors players traverse through and almost always add a new revelation to the ever-evolving narrative.

To call The Nonary Games a remaster would certainly be stretching the definition of the word. The character artwork has been touched up and retooled, but the puzzle rooms and environments reuse the same identical assets as the previous releases. The Nonary Games certainly won't win any awards in the graphics field, but the experience and storytelling more than makes up for the rough graphics.

999's story can be played in one of two ways that each provide the same experience. Selecting the newly added Novel style gives the player a more descriptive telling of the goings on, relying more on written word than art (although they're still visible in the background). On the other hand, the Adventure style plays just as the original game did with text boxes flying back and forth during more heated discussions. Either style is freely swappable on the fly and I found myself sticking more with the tried and true Adventure mode.

999 certainly sounds better than ever before, with the addition of English and Japanese dub work, but the graphics haven’t aged too terribly well in the years past. The character models and drawn artwork in 999 look colorful and fit the style well, but anything 3D-rendered looks absolutely atrocious in HD. Virtue’s Last Reward doesn’t fare much better, with the PS Vita half of The Nonary Games looking nearly identical to the first time I got to play it.

Being dubbed The Nonary Games holds a certain connotation regarding the titles offered. Zero Time Dilemma, despite being the third title in the Zero Escape trilogy, isn’t actually one of the proper Nonary Games. Due to the game being played called The Decision Game, ZTD is something that’s intentionally lacking from being a complete story experience. As such a recent title that’s available on two of the three platforms that The Nonary Games can be played on (Playstation 4 being the only outlier), it’s an oversight that can be forgiven despite the minor disappointment.

The Nonary Games have been some of my favorite visual novel style games of all time. Being able to play through a feature-complete version of 999 has been a dream and I can’t recommend it enough to anyone that’s wanted to try the video game equivalent of a room escape challenge. Virtue’s Last Reward is a nice touch for anyone that hasn’t experienced it before, but it remains as serviceable as it was the first time around on the Playstation Vita. Together, The Nonary Games comprise a collection of death-defying challenges that will stick with the player long after getting a bad end and trying again. 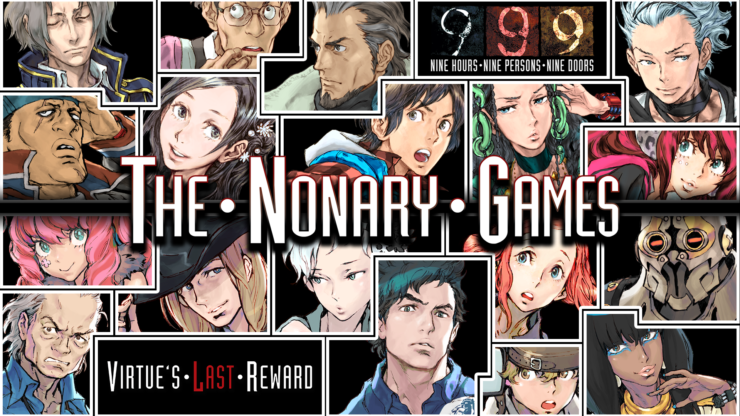 The Nonary Games contains two of the best-known escape room games (except for perhaps Crimson Room) together in a timeless package. The updates to 999 make it the most definitive version to date, although Virtue's Last Reward feels just the same as it did the first time around.