The Legend of Zelda: Link’s Awakening Review – As Good As New

The Legend of Zelda: Link's Awakening

A remake of The Legend of Zelda: Link's Awakening isn't the Zelda game I wanted next, despite having massive love and nostalgia for the original. I thought it was too small, too short, too outdated to fare well against other games on the Nintendo Switch, even with a gorgeous new art direction. But I was wrong. I had no reason to worry because just like with their Ocarina of Time and Majora's Mask remakes, Grezzo work wonders on every small, insignificant detail, and their games feel like new again. For all intents and purposes, despite how familiar it is at times, The Legend of Zelda: Link's Awakening feels like a brand new, original Zelda game.

The Legend of Zelda: Link's Awakening begins with Link's ship being struck by lightning during a storm, and he washes up on a lonely beach, to be found by a girl named Marin. From here, Link must find his sword and, with some vague guidance from a wise old owl, find his way off the island so he can return to his important adventures. It plays out exactly as you remember. This game, while looking so radically different to the original Game Boy title, is most definitely a remake, through and through, with very few puzzles or item placements changed from the original. Everything is just as you remember it, even if there are minor changes you might not notice at first.

This is obvious at a glance, but the game is gorgeous. It aims for a smooth 60FPS and achieves it for a vast majority of the time. At this framerate the tiny animations look incredibly slick and aesthetic, from Link's walk to the variety of moves and items he uses. Trees and grass shine in the sun, torches alight darkened dungeons, and a harsh smog covers the Mysterious Forest. The new visuals also lend this game a brand new atmosphere which ranges from freeing, complete with a new rendition of the classic Zelda music, to oppressive, with enemies swarming and a creepy jingle playing in the forest. 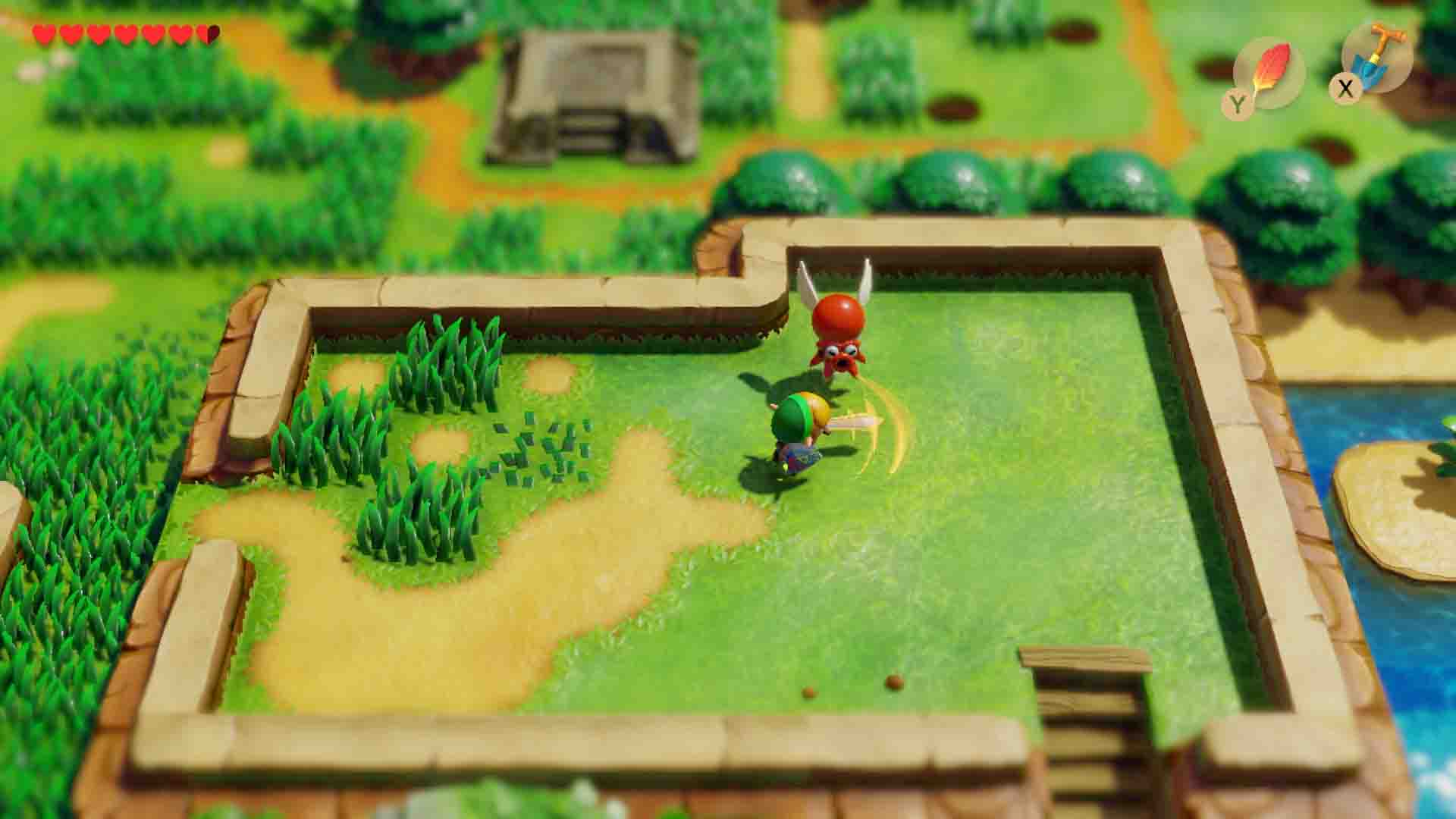 The biggest change to Link's Awakening is undoubtedly the fact that you are no longer scrolling between set screens unless in a dungeon. Now, the entire overworld is laid about before you, and what would have been several screens in the Game Boy original, is now one, allowing you to see farther than ever before. It definitely makes overworld mazes dozens of times easier and lets you see enemies coming in advance. It's a change that you will barely even notice at first, but this single things actually makes the entire game much easier to play.

Needless to say, absolutely everything from the original game has been made new again, from the way Link controls to the music that plays in every area, the redesigned enemies, and beyond. But additions and changes have been made to modernize the game too. Pegasus Boots, the shield and the sword all get their own dedicated buttons now, which is exactly what this game needed. X and Y are saved for two other items to be linked to, and you'll find yourself swapping items out regularly.

There are a number of other small modernizations, but there are also a few things here to keep the established status quo. For example, Link only moves in eight digital directions. Up, down, left, right, and the diagonally. This feels weird no matter how much you play the game. You can throw items diagonally, luckily, but you'll only be using items like the Bow or the Pegasus Boots in four directions. This can sometimes feel frustrating, but the enemies luckily account for it. Like in the old game, enemies that throw projectiles can still only do so in four directions, making them easy to dodge, even with limited movement options.

Combat in Link's Awakening, on the whole, feels better than ever. Even with limited movement options, you can still navigate Link far better than ever before, more quickly and nimbly, and with instant access to the shield and sword at all times, it's easier to block and attack quickly even if you're trying to utilize other items too, like jumping with the Roc's Feather in order to dodge attack mid-battle. This all comes together in a way it just didn't before when you fight against bosses and tougher enemies, truly testing your will. 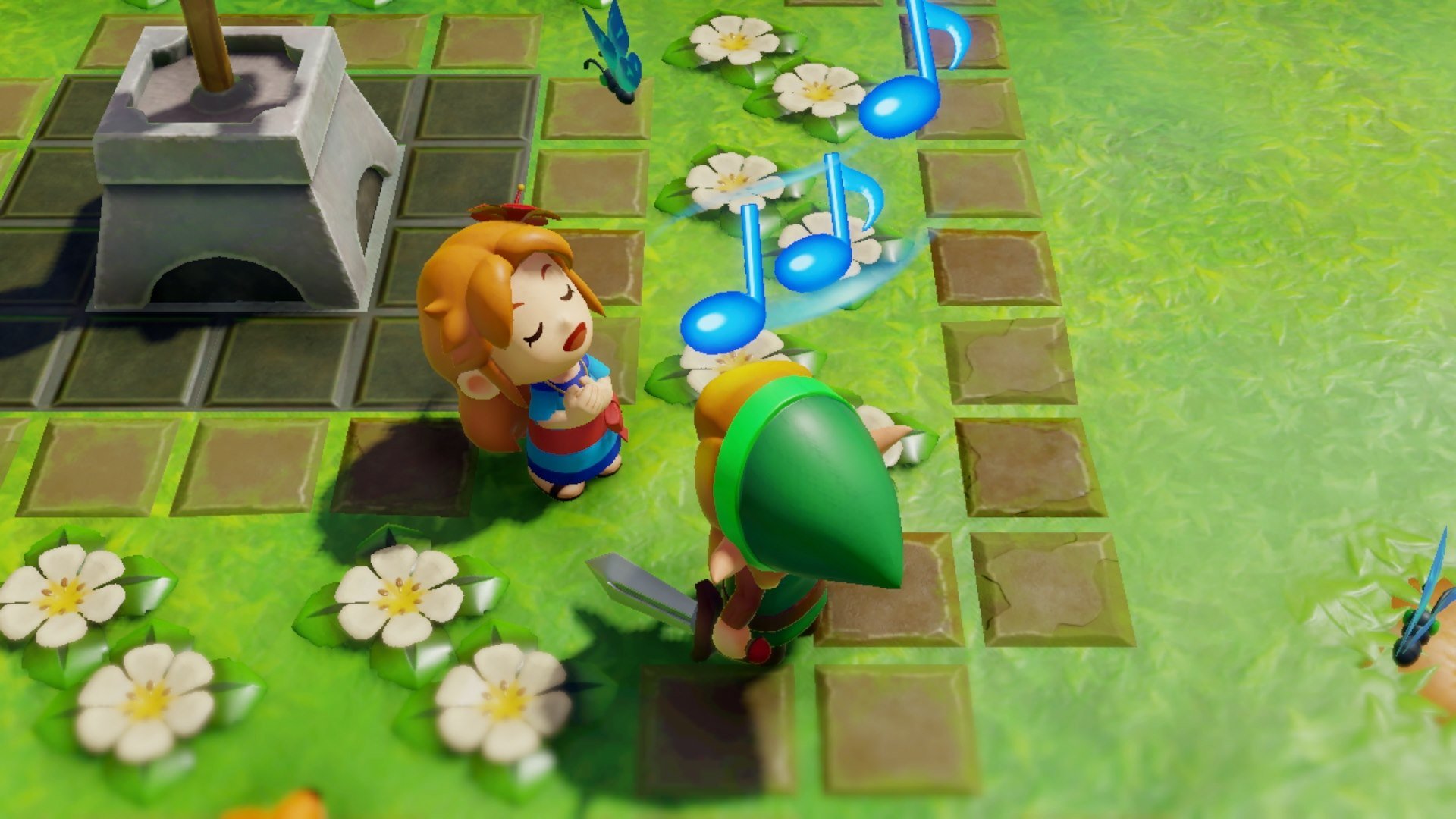 Link's Awakening's world is fairly small and easy to navigate, which has some positive and negative effects. Traversing it never feels like a chore, and it's just big enough to hide away loads of secrets and dungeons, but once you've unlocked most of the map about halfway through the game, you'll feel as if you've found everything there is to find. There is more, of course, it just doesn't feel that way. Luckily, the dungeons hold up just as well as ever. Some are small and short, but as you progress in the game they become sprawling behemoths, with very specifics orders to tackle rooms in lest you get lost for potentially hours. Of course, anyone that has a good memory from playing the game on Game Boy will coast through these with ease.

But it's not all perfect. When transitioning between areas quickly as you run through the overworld, you may find the game stutter. It seems that when loading the overworld on the fly, Link's Awakening stutters occasionally. In these moments, the framerate noticeably drops but quickly picks back up in less than a second or two. In addition to this, a still shot looks fairly pixelated on a 4K television, but in motion, the game is very smooth thanks to its framerate. On the handheld screen, the game looks incredibly smooth, and if you're a handheld player you can expect amazing image quality.

Despite owning this game when I was younger and playing it for hours, I never finished it. With this, I have finally completed a game I have such strong nostalgia for, and it feels amazing. It's certainly not my favorite Zelda game, but The Legend of Zelda: Link's Awakening is one of the best remakes Nintendo has ever made and is absolutely worth playing for all Zelda fans.

The Legend of Zelda: Link’s Awakening is Getting an Adorable Nintendo Switch Remake