It’s been a long, difficult journey, but we’ve finally arrived at the end of the world. For those just joining us, The Banner Saga is an apocalyptic Norse epic, which boils turn-based tactical RPGs, old-school text-based adventure games, and 70s Ralph Bakshi swords and sorcery ‘toons together to create a uniquely pungent fantasy broth. A surprise success on Kickstarter, The Banner Saga series has been a model for other crowdfunded projects to follow, delivering on its promises in a timely fashion and selling a healthy number of copies in the process.

But does The Banner Saga 3 wrap the trilogy up in style? Or does it fumble the third act? Is it The Return of the King or The Dark Knight Rises? Sharpen your axe, it’s time to test The Banner Saga 3’s mettle…

Warning: The following review contains some spoilers for The Banner Saga 1 and 2.

The Banner Saga 3 is, technically, a standalone game, but the trilogy tells a single connected story, with decisions from previous entries carrying forward. You’ll get more out of the story, and be less confused by the barrage of hard-to-pronounce names if you start with the first two games. That said, here’s a brief recap for those jumping in at the end of the story…

The Banner Saga takes place in a Norse-inspired world populated by humans, giants (varl), centaurs (horseborn), and unearthly thought-to-be-extinct stone people (the dredge). This world is in a bit of a sorry state, as the sun has stopped moving, the dredge have returned and are destroying everything in their path, and a sphere of menacing dark energy is spreading across the land.

The first two games served up more twists, turns, and backstabbings than I could possibly get into, but, the story roughly follows two groups. One is led by the humble hunter Rook (or his daughter Alette, which is who I played as), the other by a powerful spellweaver named Juno, who, it’s hinted, may have had something to do with the darkness afflicting the world. As we begin The Banner Saga 3, Alette has led her caravan to the bustling human city of Arberrang, the last bastion of civilization amongst the darkness. Meanwhile, Juno, accompanied by her partner Eyvind, the noble varl Iver, and a band of mercenaries known as the Ravens, plunges into the darkness to try to bring an end to the apocalypse.

The Banner Saga 3 bounces back and forth between these two groups throughout its story. Alette must keep the dredge from overrunning Arberrang while navigating the city’s politics and the machinations of Rugga, a corrupt governor with an eye on the throne. Meanwhile, Juno’s group trudge ever-deeper into the gloom, which has twisted and transformed everything (and everybody) in horrifying ways. It’s a compelling contrast – on one side, Game of Thrones-esque intrigue and tricky moral decisions, on the other, a straightforward, yet harrowing march into the heart of darkness.

The game’s striking visuals make the contrast between these parallel stories all the more stark. The Banner Saga’s stylish background art and beautifully-animated characters have always been impressive, but the Darkness, with its corrupted, broken landscape and Lovecraftian horrors, takes the artistry to the next level. The beautiful visuals are further enhanced by the game’s mournful soundtrack and a light sprinkling of top-notch voice acting.

Those hoping The Banner Saga 3 will provide clear answers to the questions raised by the first two games are in luck. The dangling plot threads are tied up in a (mostly) coherent, cathartic way, although be forewarned – this is the most merciless Banner Saga game yet. Never put me in charge of saving the world, because I made some pretty serious mistakes along the way, which resulted in some painful losses. Trust me when I say, nobody is safe.

The Banner Saga 3 makes you feel like your choices really matter. In addition to wantonly killing your favorite characters, the game makes some key changes to caravan management. The first two Banner Sagas required you to keep an eye on your supplies as you traveled. If you ran low your clansmen and fighters would start to die, lowering your morale and stats during battle. This isn’t really a concern anymore, as Alette spends the entirety of the third game within Arberrang and Juno’s party doesn’t consume supplies at all. At first, it seems like The Banner Saga 3 has removed a layer of strategy, but then an interesting new twist is introduced – at a certain point, all of Alette’s supplies and followers are tallied and you’re given a certain amount of days before Arberrang falls. You can push back your doom, but the Darkness closes in tighter on the city every time you go over your time limit. Previously, Caravan management felt a bit superfluous – this is a great way of making it feel like it was all worth it.

The game becomes a race against destruction. Alette must buy time, clinging to an ever-smaller sliver of civilization as Juno’s party try to reach their destination where salvation, hopefully, awaits. The tension is palpable and gripping, and some of the of the choices you face are particularly cruel. Just a tip: The morally “right” decision usually isn’t the best one in these dark final hours.

The Banner Saga 3 sadly hasn’t done as much to shake up its battle system. Players choose a party of up to six characters and take to a small grid-based battlefield for turn-based combat. Each unit has Strength and Armor points, with Strength serving as both HP and attack power. So, you have a basic strategic choice to make when attacking an enemy – make them more vulnerable by targeting their Armor first or go straight for their Strength, thus limiting their ability to dole out damage. Aside from that, the setup is pretty straightforward. Characters come in a wide array of classes, which possess a variety of abilities and, most of the time, the goal is to kill the bad guys before they kill you.

Unfortunately, this simple system is somewhat undermined by flaws that have persisted throughout the Banner Saga series. Your characters block each other on the battlefield (Nobody can just nudge aside? Really?) and the turn system is broken. You and the enemy take turns moving and you can only return to a unit once everybody else on your team has moved. There’s no speed stat or Active Time Battle system that lets faster characters act more often. This means it’s often a disadvantage to field a full team – sometimes you’re better off sending only two or three strong characters into battle, as they’ll be able to get more attacks in and won’t get beaten up on when waiting for their turn.

While these basic structural problems endure, The Banner Saga 3 has added some classes and enemy types for a bit of extra depth. Also new are Wave Battles – these give you a certain number of turns to defeat all the enemies on screen. Fail to beat all the baddies in the allotted number of turns and another wave will join them. Succeed, and you can choose to tackle additional waves, which carry greater rewards.

The Banner Saga 3’s battles are satisfying on a very basic level, thanks to the game’s smooth animation and splashes of gore, and typically aren’t terribly challenging. If a unit is knocked out, they’ll be “injured,” which just reduces their stats for a bit until you’re able to rest at a campsite. The lack of serious consequences for losing characters in battle means there’s not a lot of incentive to play carefully. If you eke out a win with only one or two units standing, it’s fine – just move on. The Banner Saga 3 is no Fire Emblem or Final Fantasy Tactics, but its battles are relatively low-stress and usually won’t interfere with your enjoyment of the game’s fantastic story. Really, that’s the best thing I can say about them.

The Banner Saga 3 is around the same length as previous entries in the series, weighing in at around 10 to 12 hours. In theory, there should be plenty of replay for those who want to go back and make different decisions, but the game doesn’t make it as simple as it should. The game uses an autosave system and there’s no easy way to explore its branching paths. I understand the developers wanted to combat save scumming, but once a player has finished the game, they should be allowed to tinker. As is, I’m probably going to fold up my banner after a single playthrough.

This review was based on a PC copy of The Banner Saga 3 provided by publisher Versus Evil. You can purchase the game for PC via Green Man Gaming, for Xbox One directly via Microsoft Store. 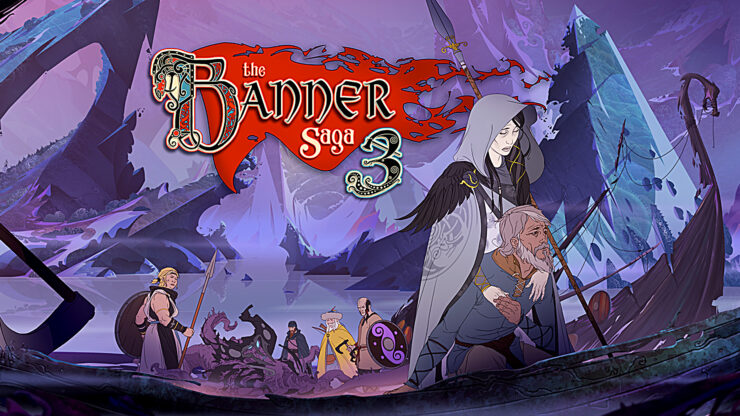 The Banner Saga 3 wraps up its six-years-in-the-making epic in poignant, gripping style. The game’s tactical battles still have some issues, but their rough edges have been sanded down to the point they no longer detract from the game’s stellar writing. The Banner Saga 3 deserves to be held high as a prime example of both video game storytelling and a crowdfunded project done right.