Here's a fun fact about me. I love rock music. Ever since I was a kid, I have been listening to rock music from my era including your usual suspects like Metallica, Van Halen, Aerosmith, and The Doors. In addition, I have experience with Latin American Rock and pop bands from those ages like Los Enanitos Verdes, Caifanes, and Rata Blanca. You can just imagine how excited I was when I found out about this game that pays tribute to rock music itself called The Artful Escape.

I mean, the creator of the game Johnny Galvatron was inspired by figures of the same vein when he created his band, the Galvatrons. However, Johnny was met with the dreaded 'real-life complications' like tough crowds or a laundry list of responsibilities topped by expectations from management, tours and festivals, and obligatory parties. At least, that's what he said to The Washington Post in an interview last month.

[Our venues] were like the pubs that have lots of poker machines in them and a band room. They’re the worst ever and people throw things at you. That was my experience.

The Artful Escape aims to be both a tribute to the legends of that time while at the same time reimagining the fantasy of how breaking out of the shell and transcending on your own would be like. We go on a trip across the far end reaches of space just to find our own identity and print our name in the stars above. 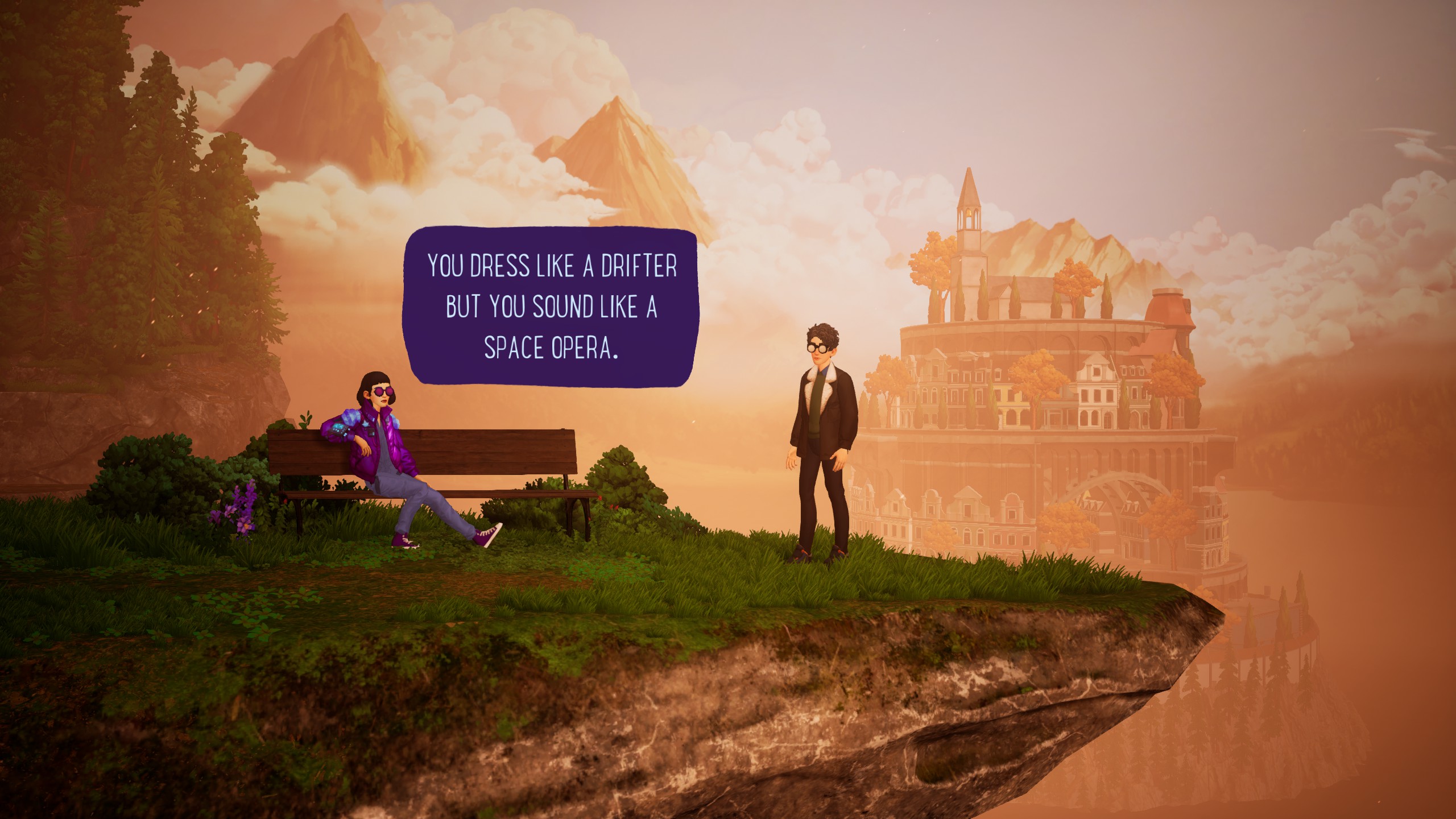 The game is led by a teenager known as Francis Vendetti, the nephew of a legendary folk musician known as Johnson Vendetti. While Francis is a musician just like Johnson was, Francis has problems trying to play Folk music. More often than not, he ends up drifting into sci-fi reaches and shredding his guitar in public.

We meet Francis a day before his first public concert. Francis shows that he really doesn't like living in the shadow of his dead uncle. However, the town he lives in (and thus the majority of the society around him) constantly pressures the boy into becoming a folk musician. Of course, that's not what Francis really wants. He wants to be a rockstar who plays Space Operas and change his name into something more akin to that, much like how Farrokh Bulsara became the man we know as Freddie Mercury. This reminds me that a lot of musicians at the time really were fascinated with space or planets.

Back to the subject, an event like none other happens during the night before Francis's important concert. A meteorite crashes into the small town and out of it comes an alien that finds Francis in his apartment and hands him a holographic guitar alongside a new sci-fi-themed suit. Francis begins shredding the guitar, making the town's lights spring to life before being met with another musician who calls himself Lightman.

Lightman gives Francis a chance to become part of his Cosmic Extraordinary tour. With some hesitation, Francis agrees to be taken and thus, we begin a cosmic music tour in which Francis discovers his true self while he leaves his former self behind to give birth to a new persona. This journey is also met with a lot of psychedelic visuals, rock music, and the odd 2001: A Space Odyssey reference. 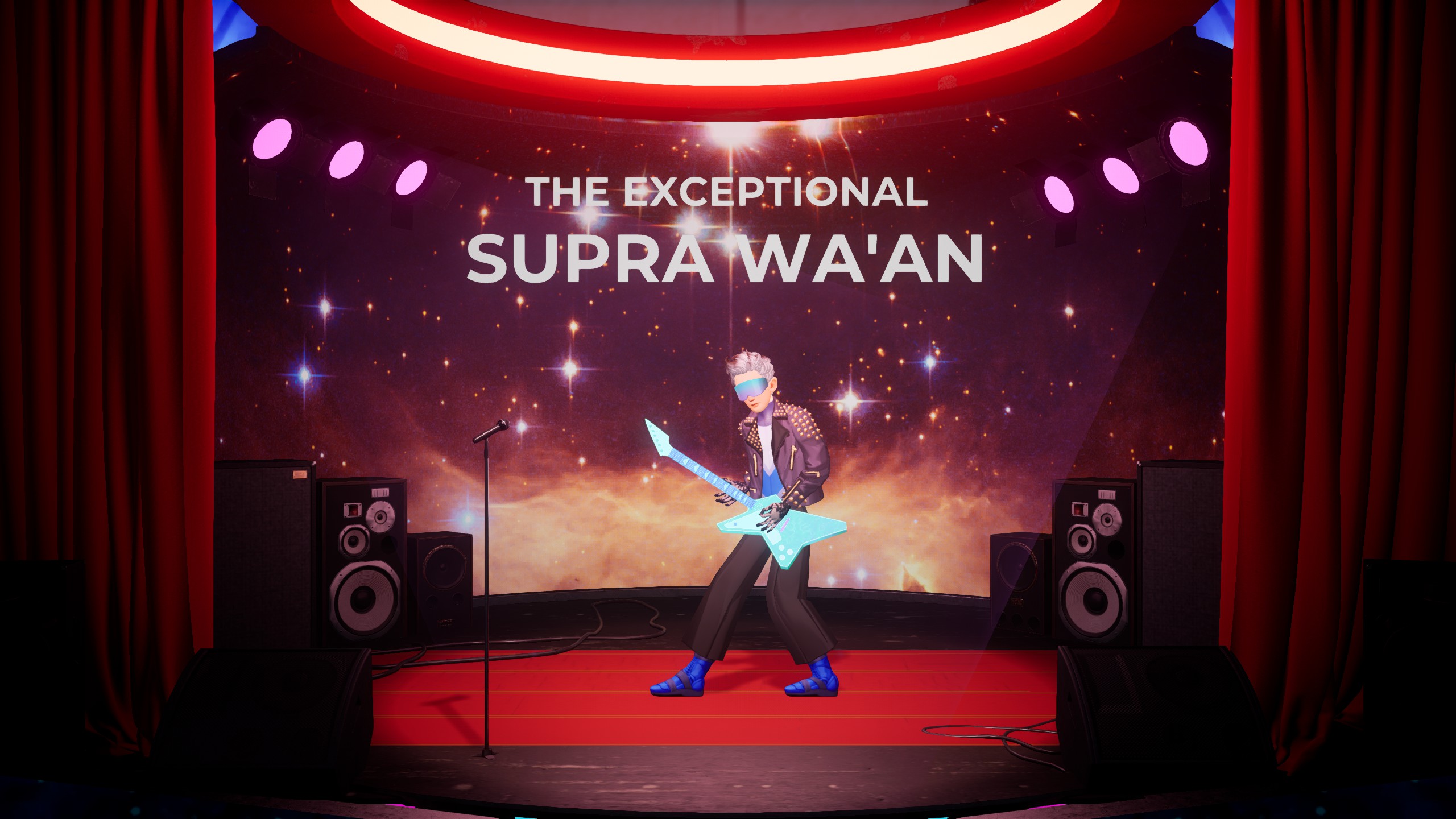 Yes, that is my Space Rockstar name, don't steal. But anyway, the game plays as a scrolling platformer. You control Francis and go from point A to point B while avoiding pitfalls by jumping. Along the way, you can use your guitar to interact with the environment around you and essentially make the scenery come to life by pressing and holding the X Button (assuming you're playing with a controller).

Once you reach Point B, you'll be met with sections where you can freestyle with your guitar by pressing X, Y, B, LB, and RB or in a fight against a boss. Bosses and other jam session-type scenarios will require you to follow a Simon Says-like sequence in order to progress further along in your quest.

Playing The Artful Escape feels like playing one of those games like Gris where there is no real consequence for "dying". There also is no sense of urgency in the platforming or the jam sessions. You can just take the game at your own pace and essentially be the creator of your own rock music video.

I think that's gonna be something that'll make some people walk away from The Artful Escape. There really isn't much to the game besides walking forward and shredding along the way. This is one of those games where the narrative is going to be the central focus of the whole product. If you don't like the plot or the development of it, there won't be much else for you to do besides maybe achievement hunting.

Do I think the plot's anything special? Not really. Even with the sci-fi setting, this is still a "Breaking from the shell and becoming your own person" story. The game explores the characters themselves more than the plot itself. It's important to make that distinction because the thing you'll resonate with the most (or at least I did) was Francis and his struggles, not so much the journey he goes through. 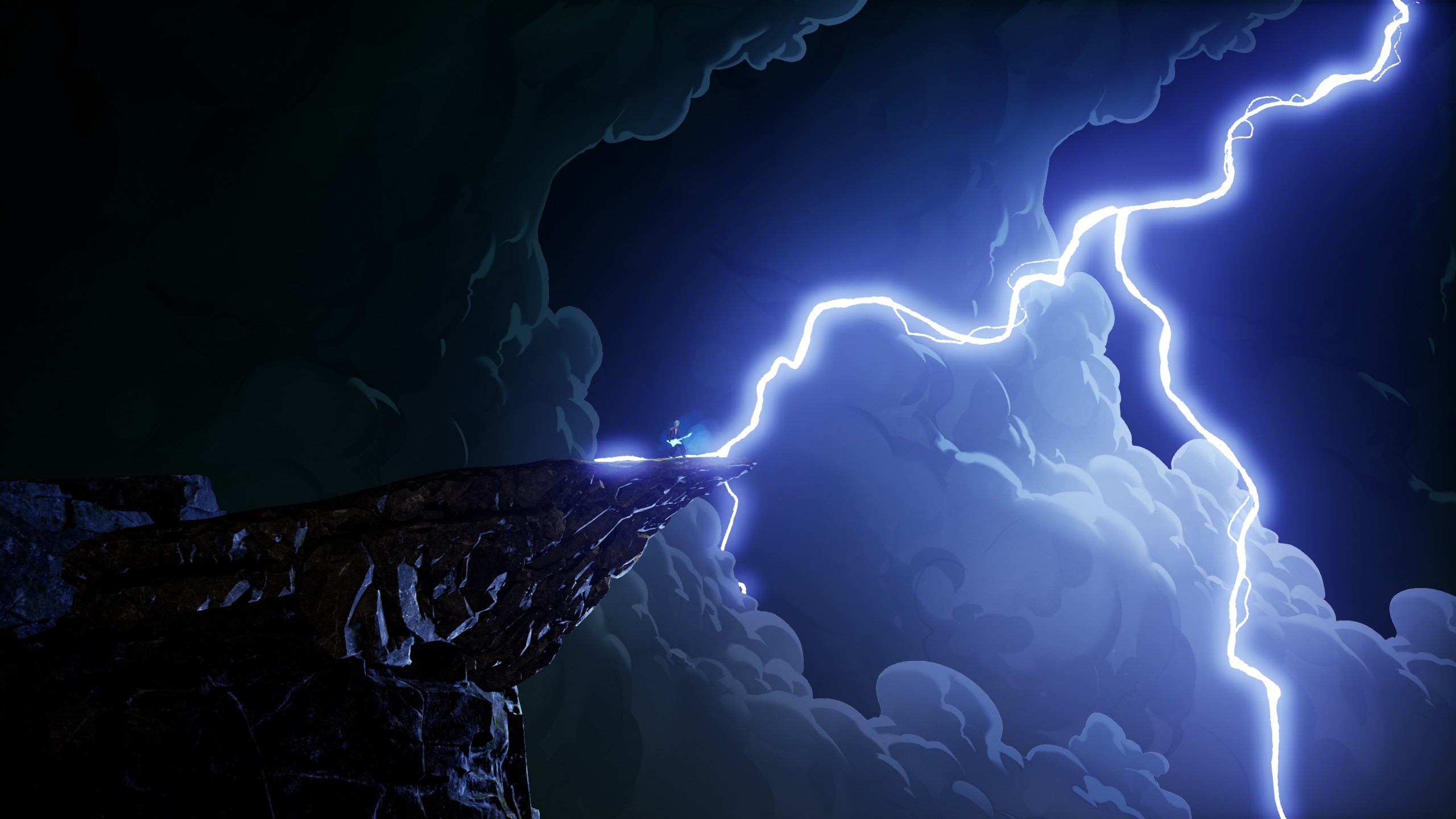 The Artful Escape runs on Unreal Engine 4 and by goodness, it looks amazing. The game uses 2D puppets in a 2.5D environment. The game oozes with personality and psychedelic visuals. It feels like you're watching a music video that you can interact with. You'll see how crazy the lighting can get at the end of the review. But the game just looks fantastic and surreal.

Every cutscene and bit of dialogue is voice acted. Some celebrities such as Carl Weathers, Lena Headey, and Jason Schwartzman provide their voices to some characters. But more important than the characters is the music of the game. The game's visual aspects might be amazing but the music is in a league of its own.

I could recommend The Artful Escape to anyone who loves rock music. They are going to love every step of the way even if the game in and of itself is barebones. Each area of the game has its own distinct musical tone that is only made better when you add your shredding of the guitar to it. The real challenge of The Artful Escape (at least in my opinion) is to keep the music going while sliding down some mountain cliffs and jumping over pits.

As you progress through the game and continue shredding, the environment around you comes to life. Plants begin to grow, caverns begin to fill with colored lights, exotic creatures wake from their slumber and start walking to your tune. The visual aspect of the game moves alongside the player and it also reacts to whether or not they are rockin' out. 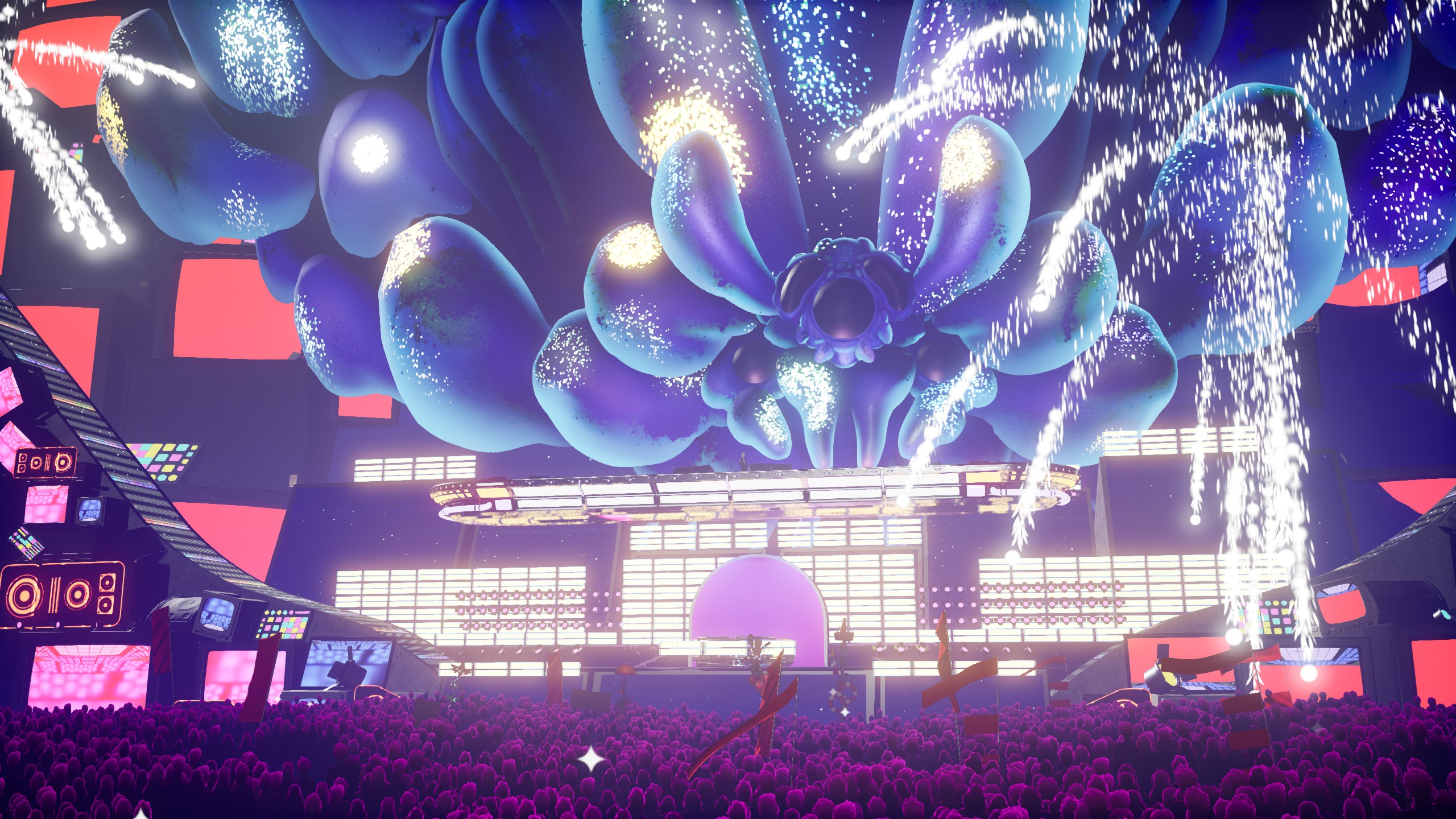 Overall, I feel like The Artful Escape is one of those games that will find its place in the hearts of certain niche gamers. This is a very unique game that will only cater to those fans, pretty much like any other narrative experience. Of course, not everything has to be shooty-shooty, bang-bang action all the time, and compared to other narrative experiences, this one is a breath of fresh air.

If you're a fan of rock music (especially that of the '70s-'80s) then this game is a great pick for you. The game will make you feel an experience that must be a memory that Galvatron happily looks back to. A simple experience filled with wonder and thrill where you could become whoever you wanted even though everybody else said that you had to be someone else.

While this game might not resonate with everybody, I know for a fact that it did resonate with me. So, as the Exceptional Supra Wa'an, I have to say that I was pleased with what I've got. Now, I have a music video to film and a very special audience to show it to.

The Artful Escape is a rockin' Space Opera but it doesn't have much going for it besides its pretty visuals and incredible music. The platforming is basic and the plot is serviceable, but it's nothing that audiences haven't seen before. I'd recommend this game only if you're a fan of rock music from the '70s and '80s.