The Age of Decadence

Copy purchased.
Disclosure: I backed The Age of Decadence on Kickstarter.

It was three and a half years ago when I bought The Age of Decadence from Iron Tower Studio. The game had just been released as a public beta, but foolishly I bought the game before I gave the public beta a go. I wasn't a fan at the time and just wrote it off as a bad purchase. Flash forward to October 2015, The Age of Decadence has its final release and it turns out to be one of the best RPGs around. However, it's about as niche as a title can get.

Why? Because the game is all about reading. Everything is explained in such detail that the term 'wall of text' doesn't do it justice. It's also one of the most difficult games around, sporting a level difficulty akin to Dark Souls, but it's designed in such a way that it achieves its goals. The Age of Decadence is a game where the story and world matters, where there are so many permutations that even if you complete it three times, you won't have encountered everything. 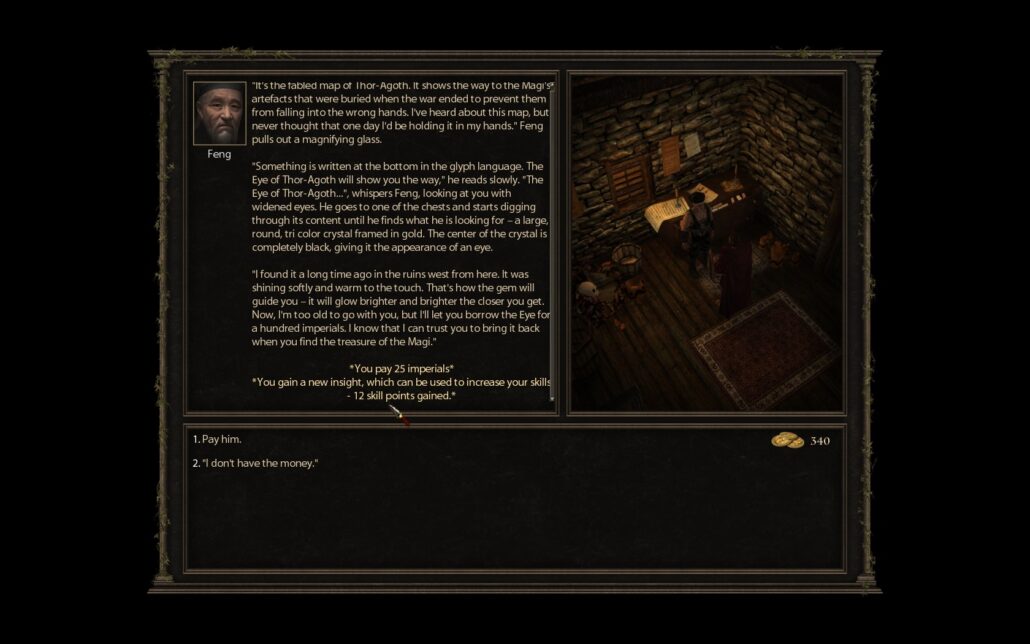 In many titles the cause and effect between decisions is shallow at best, resulting in a change of a few lines of dialogue or a pandering slap on the wrist. Here, however, your choices have understandable consequences, from the simple to the elaborate and from the large to the small. They can also come back to you in surprising ways, many hours after you've forgotten about them. One example is that you can end up being the reason thousands of people in the biggest city are outright destroyed; this also results in your character gaining one of the few magical abilities in the game.

Playing through this game multiple times while taking different paths is well worth it, because even the secondary quests have branching results. Doing this also allows you to see how the multiple stories interact with each other, particularly those of the guild quests and family quests. It truly is a world that changes through what you do and one where your choices are down to personal morality, rather than some arbitrary system put in by the developer. 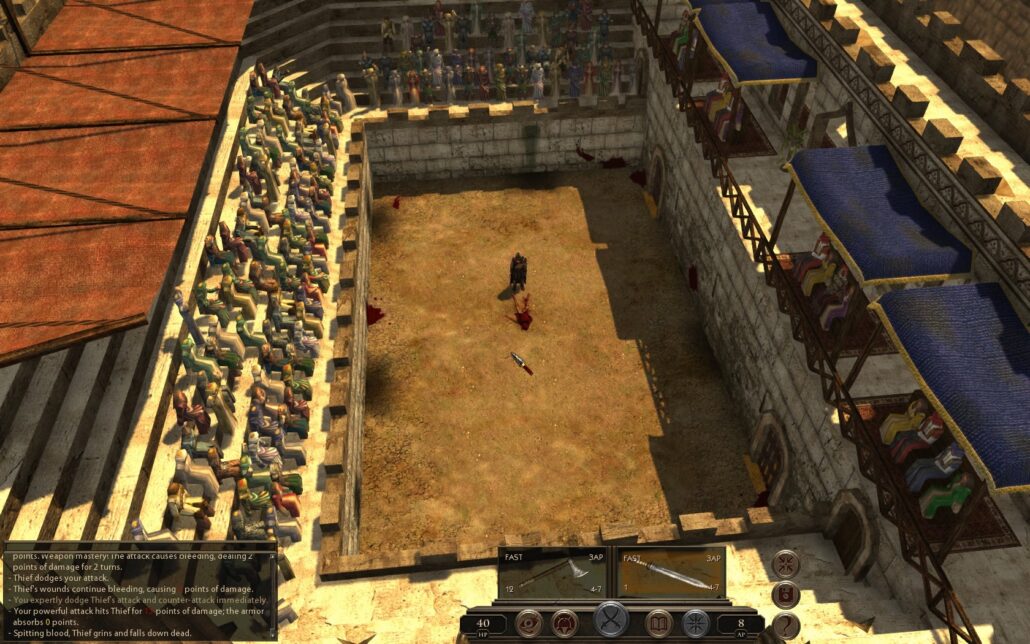 When creating your character you're given a number of backgrounds to choose from, which unlocks access to some quests earlier than with another background - for example, a former praetor will be able to access some exclusive areas whereas others have to gain favor first. My preferred background is that of a wanderer, a veritable blank slate in which you can be whatever you want to be.

This is where the difficulty comes into play. The game relies heavily on attribute and ability figures. Much like a traditional RPG, the success of every action is based on your ability in one, two or three areas reaching the required amount to perform it. As such, attempting to be an all around character can be a frustrating and fruitless venture, best attempted when you've completed the game once or twice as a specialist character.

I've played as two types of characters as of now. My first one was a proficient killer, strong and dexterous, sneaky, good with a sword and dagger and could always land a critical hit. My second was a Loremaster, highly intelligent but weak; he was persuasive, had good etiquette and could talk to anybody. Out of the two game styles, I have to admit I preferred the former. My fighters street smarts kept him aware of people trying to trick him and he was eventually the champion of the arena after some tough and intense fights. 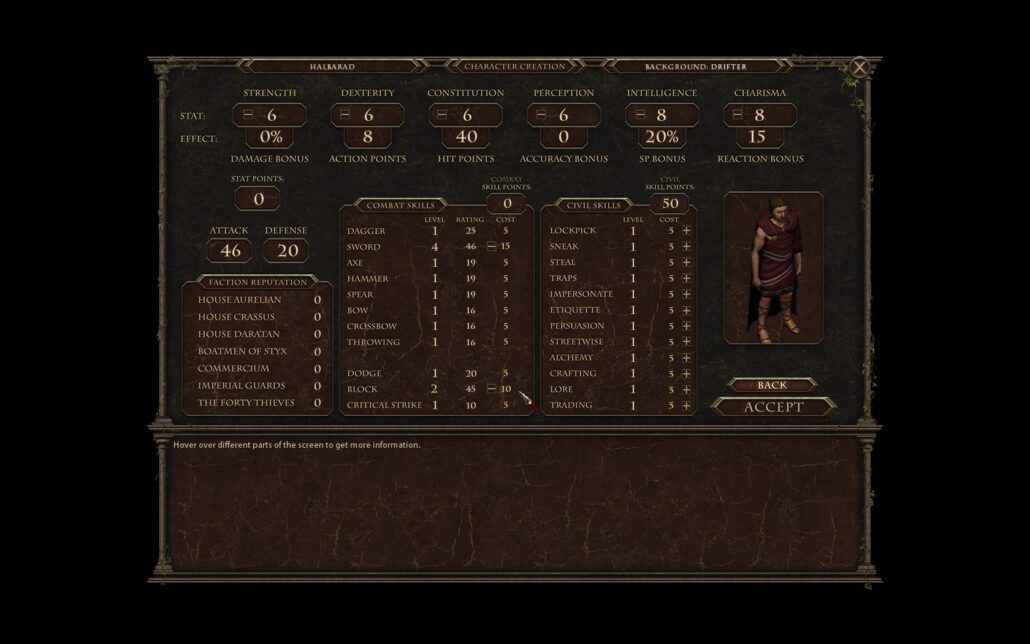 It's the combat system that offers so much. There are no fantastical battle skills to choose from, what you do is select from a variety of attacks that you could find a real fighter using. From a light jab to a powerful attack, simple abilities like feint attacks and even the option to aim for a specific part of the body. Combining this with the myriad of weapons available and the thought you have to put into your character build, the combat is considerably more tactical than it initially seems.

It can also be incredibly tense, but fun and rewarding, when the battles intensify. They can range from simple one vs one fights to huge clashes between yourself and your allies against a huge group of enemies. Regardless of the fight, positioning and tactical thinking are key. Make a mistake and it can very easily lead to your death because even as a fighter, you can and will die. You also get a death scene specific to the reason you died. 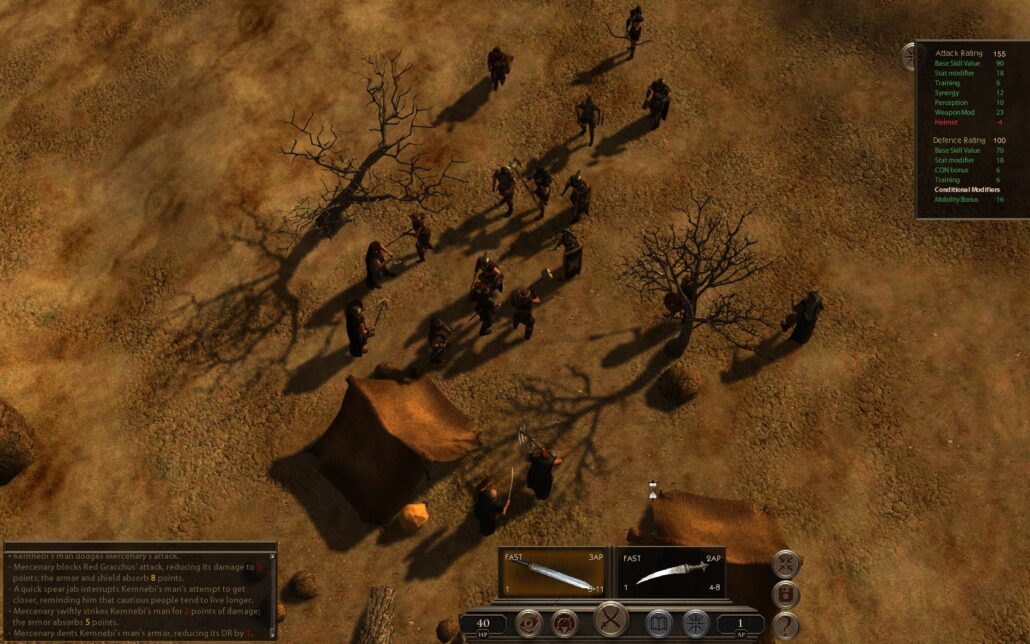 The Age of Decadence lets itself down in two areas. The first is that it really is an ugly game and there's no getting around that fact. The menus are bland and the interface clunky, the saving grace being that the interface is so small you'll barely notice it. The only aspects of the game that are suitable for this day and age would be the drawings featured when you enter a new area.

Even the audio seems uninspired. The soundtrack is fitting with the Roman theme, but either there are maybe four or five tracks that loop throughout, or they all sound so similar that I genuinely couldn't tell one piece from the next. Even more disappointing to me were the combat sounds, bland and repeated, and also the absence of ambiance sounds. Marketplaces are eerily quiet. Fires burn without a crackle. It's just strange to be missing something that is so fundamental to creating a game that wants to absorb you into it.

The second area is, ironically, that it doesn't explain itself enough. Despite the sheer mountains of text you encounter, the game never really tells you what a skill is useful for and just gives you a vague description on the character screen for each skill level. This is solely a problem for beginners, as anybody who spends a few hours in the game will come accustomed to the skills and their uses, but not shutting out newcomers is essential for any game, more so a smaller indie title like this. 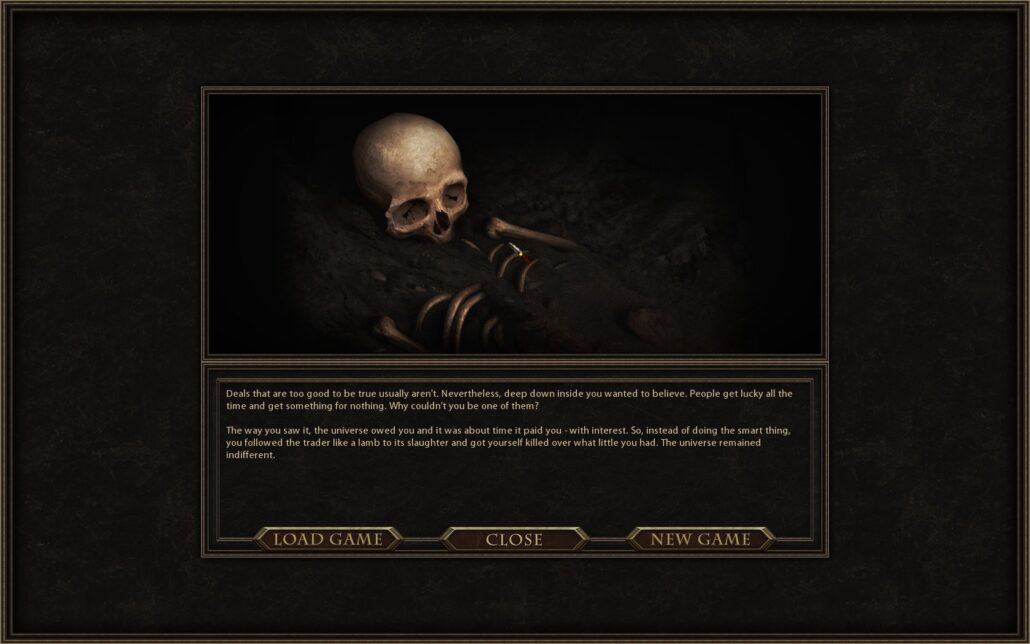 Despite it being ancient in appearance and sound (and the prohibitive difficulty for newcomers), The Age of Decadence has blown me away with the sheer choice it offers in such a small space. I'm not overjoyed that once you join one guild, you're locked out of the others due to the interacting quests, but I should be praising things like that as it means that your choices matter. Age of Decadence is likely the best RPG I've played since Skyrim.

Age of Decadence is a challenging, yet excellent RPG. With a huge focus on story and depth, it gives you a wide variety of choices to make, ones that have actual impacts on the story. Not only that, the combat is easy to learn but can be incredibly tactical. This is a game well worth playing.