Looking at the header of this here review of Sword of Legends Online, you may be wondering if I have suddenly attained an infatuation with the dangly bits between my legs. I have not. When I speak of bollocks, I do not mean testicles. Here in Britain, "bollocks" is also a word meaning nonsense. If I were to describe Sword of Legends Online as anything, it would be nonsense. Not the game as a whole, but most certainly the story - that is nonsensical.

Does that mean the game is bad? Well, this is an MMO, a type of game rarely known for its mind-blowing storytelling, so that could potentially be something in the game's favour. So now I've beaten around the bush for long enough. Let's get to the meat of the review; Let's talk Sword of Legends Online.

Zenimax Online’s New Game Has Been in Development for 4.5 Years, Now with 200 Devs

Naturally, I must talk about the story after that introduction. Putting it simply, I have absolutely no clue what's going on, and I haven't had a clue from early in the game. This is due to several reasons, the primary one being that the story has genuinely gone over my head. I'm sure other people understand it, but they are undeniably better people than me. It's not that the overarching narrative is difficult to understand; there's a renewed war between good and evil. You've merged with part of a sword with an ancient spirit in it. Deities walk the earth like anybody else, and this is a world in ancient fantasy China, where some of the locations are real, such as Chang‘an (modern-day Xi'an).

Okay, so maybe it is a bit much at times. You've got part of an ancient spirit talking to you. You've got characters that look 10 years who are the leaders of a group. You've got "elders" who look like they're thirty. Major story aspects, such as characters' names, literally get thrown out there with characters immediately aware of them despite no earlier mention. This is a shame because some aspects of the game show it can do stories right. Not only are there the usual side-stories featured in your usual side-quests, but there are also biographies of major characters for you to take on and explore. Then again, some of these also suffer from bloat or a linking to the core story, but most I've been able to follow.

It's a shame because you can tell the amount of detail put into the story here. It's very much an eastern-fantasy plot, so there is likely to be some disconnect between a general western audience and the game. This isn't to say that you can't follow it, but a lot of the time, it starts to feel a bit hokey and - as I've already described - it throws so much at you, it's almost impossible not to miss some key elements. This is especially true when trying to take in the story and the many gameplay elements found within Swords of Legends Online. More on those later.

Before we move onto other elements, let's talk bugs. I'm fully aware MMO's are massive games, and it's easy to miss some elements during the QA part of the development and/or localisation. This can and has happened in smaller games, but I would never honestly expect it in what I believe are core quests. Most of the time, the game shows English text while playing the English dub. More than a handful of times (I stopped counting at fifty), I've had either Chinese language with English text, English language with Chinese text or Chinese language and Chinese text. It throws me off. Other bugs also include voices not playing, text not showing, and cases of the same voice line playing over itself or multiple lines playing over each other. Oh, before I forget, the subtitles and the language - when both are English - don't always match. These are core quests and cutscenes.

So, since I admittedly think the story is nonsensical at best, at worst impossible to understand due to the way it's presented and the far too many issues getting in the way, what do I think about the rest of the game? Here's where the review starts to get a bit more positive, though there are a few caveats. Swords of Legends Online is absolutely crammed full of a myriad of different elements. From pets, player housing, treasure hunting, fishing, crafting, a host of collectables to get, a massive cosmetics system (more on that), and even more. That's before I again mention the quests, side quests, biographies, dungeons, and PVP.

I'm sure I've missed something off of this list, but that's because the list feels almost inexhaustible. I'm not sure if it's simply because I've been out of the MMO scene for a long time, but I don't remember even the biggest MMO's being this bloated. I'm all for having a wide number of features, so long as they feel useful or fun, preferably both. In Swords of Legends Online, some I really like, from the player housing and the pets to the biographies side quests. Others feel tacked on at best until later on in the game, where they finally become useful. Treasure hunting and crafting are prime examples of this.

If anything, I'm a little picky. Sure, the treasure hunting is somewhat simplistic (though rewarding later on), appearance levels are tacked-on at best, and fishing is broken - every single daily fishing quest will tell you to fish for different items, but all you need to do is fish anywhere and catch anything for it to count - but there are several well-developed aspects. If you're here simply for game mechanics, I don't think there's much chance of you getting bored. This is particularly true once you hit max level, as well as when you look at the combat.

I've played many MMOs, and the more I've played, the more I enjoy those with active combat, which certainly is a good thing for Swords of Legends Online. Combat is engaging, fast, and most of all, interesting. Each of the six classes plays differently, but my favourite is the berserker, armed with a greatsword and a feature where you build a strike meter and counter, improving the effectiveness of later attacks. In this situation, Rage is essentially your MP. Other characters, such as the spellsword, use Qi.

What's engaging about the combat here is that it's very reactive and positional. You need to position your attacks well and, most of all, use them well. Combos are a perfect weapon, and one well-performed combo can turn a fight around. Fortunately, too, the hotkeys never become cumbersome, and the game allows you to play in traditional RPG style mode - hotkeys for all attacks - or action style, where two attacks are bound to your left and right mouse buttons.

Whichever way you look at it, combat and the controls system are some of the game's best features, out of a litany of them. Part of the problem is also a similar problem I had with Black Desert Online, that being the explanation of features. Part of the problem will be much the same as with the story; localisation isn't ideal. Sometimes explanations will be vague, even pointing you in what seems like the wrong direction. Other times the explanations of how to use features are non-existent. I still, to this very second, do not fully understand some features.

The other problem is that too much is locked behind the levelling process. A process that is mind-numbingly boring since it's mostly running between characters and over-long dialogues, often indecipherable due to the shocking localisation. Even the combat, which is good, is held back until the endgame, where even regular dungeons get added features. It's also the endgame where treasure hunting comes into its prime and where you get to start tinkering with your house.

It's annoying more than anything because Swords of Legends Online is a genuinely beautiful game, and I want to be as engrossed in the general run of the game as I am in the combat and aesthetics. Much like the story (from what I can gather), this is very much based on traditional Chinese design. Characters are modest by general Asian MMO standards (looking at you, Blade & Soul and almost every other Asian MMO). There's also a huge amount of customisation options - fuelling the in-game store - and the environments are gorgeous. This is only enhanced by the outstanding audio tracks, with a soundtrack I would gladly buy and stick on in the car.

The question is if I would play more Sword of Legends Online? I think I would, but this feels more like a filler MMO, rather than one that I'm genuinely thrilled to keep coming back to. For others who have got into the story and other aspects, this could be a decent title. That it isn't subscription-based, nor is it pay-to-win, is a great boost in that respect. The issue is that it takes far too long to get going, and even when it does, there are too many issues in translation and simple ease of use to make me recommend it for anybody but ardent MMO fans. 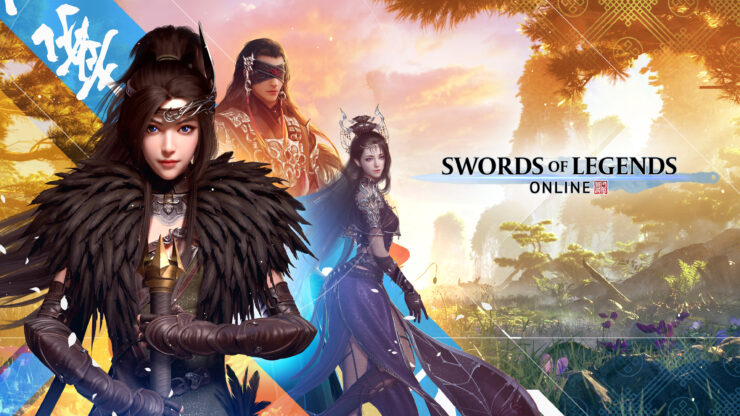 Sword of Legends Online has so much to offer, but it's sadly gated off by utterly terribly localisation in the text, the cutscenes, voice acting and - worst of all - the UI. If you can get around this and the horribly slow and tedious levelling process, there are a wealth of features to dig into, some that give this one of the better endgames in any MMO, particularly a non-subscription and non-P2W title. With excellent combat, only enhanced as the game progresses, and features like player housing, pets, extra narrative elements like character biographies (somewhat more understandable than the core story) and more, it's worth the grind, even though the grind is atrocious. On balance, for MMO fans who are used to, and can put up with this sort of nonsense.