There are so many reasons to love the Mario Party series. There's also a good few reasons to despise it, honestly. A bit like Monopoly, if you're on a good streak it feels like a good game, but before you know it you're nearly two hours in, sweating in a smoky room, empty bottles filling the bin, you've been losing for half of it, and all of your friends are growing increasingly impatient with both the game and the situation you're in.

It's a Shakespeare play, from the jovial first act, the mild strife in act two, and then ultimately the tragedy that is act three. But how pleasant the Mario Party experience can be is dictated by which game in the series you're playing. There's love for the Nintendo 64 originals and the Gamecube titles, but people have less patience for the installments on the Wii and Wii U. Understandably so.

Super Mario Party though is taking things back to basics, back to how people used to enjoy the game, and filled it with a bunch of minigames that'll have you pulling out all of your JoyCon controllers. Of course, that means that - yes - you can instantly play with two players just by virtue of having one console, and if you know a friend with a Switch, you easily have enough controllers for four players to play together.

So getting friends together and having them all play is a simple and inviting process, but without quality boards to play on, and of course minigames to play, it’s all for naught. But luckily, Super Mario Party delivers on those too - mostly. The biggest change or concession made to the boards now is that they're much smaller in size, and therefore easier to navigate in order to collect stars and progress.

The dice rolls are also smaller, but that just means that items you can use to boost your roll - or nerf an opponent's - are more valuable here, and can actually make the difference between winning and losing. That doesn't necessarily translate into shorter game length though - a ten turn game can still run you an hour, easily, especially if people aren't paying attention for their turn, or making gratuitous use of the pre-game minigame tutorial, which each player has to ready up for each time.

Super Mario Party is a bit like Monopoly then, where it's fun to be winning, but if you're a player living on the financial brink, you're going to spend a majority of the game just fumbling through, waiting for things to be over. The post-game star shower is still here, delivering rewards to unlucky players and those who win minigames, but even that isn't enough to turn the tide if you haven't managed to buy any stars.

Minigames are the usual Mario Party fare for the most part, but they make full use of the JoyCon functionality. They're short, quickfire events where you press a button fastest, navigate a path the mostly cleanly, or work with your friends against another friend - the latter usually being the most entertaining, as the gang mentality sets in, just before the team discovers the odds are stacked against them.

For the most part these are the minigames you remember, or variations on their basic concepts, with some brand new minigames thrown in to make full use of the JoyCon. In one game players simply fry a cube of meat on all sides, using the motion controls to spin it around in the pan, and using small flicks to flip it over. It all looks wonderfully detailed in motion, as well as incredibly responsive. In another player hold JoyCon horizontally, and spin them quickly to peddle a bicycle. In yet another, players simply use the analog stick to avoid Chargin' Chuck.

Each minigame makes a decent finale to a round of running around the board, but the minigames when offered as move of a speedy burst-fire package feel way better to play. As such there's a free play mode, where you can play through just the minigames, loading up a playlist or picking ones you want to play, like a Spotify for multiplayer gaming.

If you miss the Mario Party innovation that forced all players to take their turn at the same time in a giant car (no one missed that) then you're in luck because it’s back, but it actually works way better now. In the River Survival mode, four players can paddle a boat downstream, hitting balloons to trigger minigames and increase your time limit so you can reach the end of the river. It's another way to play Mario Party minigames without being confined to the classic board game if that's not your thing.

But there are yet more game modes to explore in Super Mario Party, such as the Sound Stage where keeping on beat is as important as winning games, and Toad's Rec Room, where you can use multiple Switch consoles together for more interesting uses of the console. And those are just the beginning, though none of these extra modes are as fully-featured as the classic Mario Party and new River Survival modes.

And while there's a lot to enjoy about Super Mario Party, there's a point of contention I just couldn't get around. It felt a bit by the numbers. A Mario Party game for the sake of releasing a Mario Party game. I don't usually think all new games in a series need to reinvent it, iteration is fine for many game series, but here it feels too iterative. Too much like what we've seen before, and not even necessarily a refinement. Though, having said that, the ease of using JoyCon controllers for multiplayer, in additions to the new motion controller game types, it really is one of the more robust Mario Party experiences, even if it's not necessarily the best. 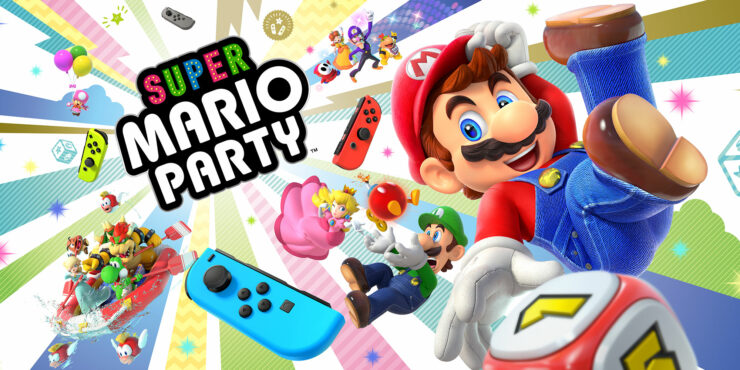 If you've been eager to get more parties pumping with your Nintendo Switch, then Super Mario Party might be the game to make that happen. Though it could also make your friends throttle one another. Either way, good times are had, and memories are formed and shared. Poetry in motion.