When I reviewed the SteelSeries Rival 3 a little over a month ago, I pointed out that Steelseries had managed to find a good trade-off of a strong build with some nice features, all while keeping the price to an affordable level for those looking to invest in gaming peripherals, but not wanting to break the bank. The Rival 3 mouse succeeded in that, but following up with a review of their mouse comes a review of their mid-range keyboard, the Apex 5.

Coming in at £109.99 or $99.99, I would argue it is affordable for a gaming keyboard - particularly when really high-end ones like the outstanding Corsair K95 Platinum comes in at over double the price. The question then is if the keyboards trades too much away to keep this affordability? Let's have a look.

iOS 16: How to Enable Haptic Feedback on iPhone Keyboard

So the Apex 5 isn't a mechanical keyboard, let me make that perfectly clear. What it features is what they label as a 'hybrid mechanical' switch which has the spring, the click and (a bit of a) bump from the mechanical side of things, then kept to an affordable price by cutting out all of the expensive circuitry that comes with mechanical keyboards and gone the membrane route. Steelseries describe them as mechanical keys, but it's just how the keypress actuates that has been changed and made more affordable.

From usage, I haven't noticed any real difference to using any other mechanical keyboard, a testament to just how good these hybrid switches are. I've typed over twenty-thousand words with the Apex 5 so far and I can't say I've noticed any issues, with my typing speed getting up to normal once I got used to the spacing of the keys. The feel of the key as it presses in is enough to make me forget that it's got anything membrane related.

Playing games, I've spent a not inconsiderable amount of time playing Fallout 76: Wastelanders, Rainbow Six: Siege and HYPERCHARGE: Unboxed. Throughout all of this, I can't say I've noticed any concerns. There was no delay in the activation of a jump when collecting everything in HYPERCHARGE: Unboxed or the lobbing of a grenade or sprinting in Rainbow Six: Siege. Even in Fallout 76, something I expect to cause bugs in everything linked to it, the keyboard performed as expected.

With it being a hybrid and having a membrane, I don't know if this will have a large impact in the long term. Will the membrane eventually stop reacting as well to a keypress? I remember using membrane keyboards, maybe a little over ten years ago, I remember specific keys requiring what was essentially a sledgehammer hit to activate. SteelSeries have rated the keyboard at 20 million keypresses though, so if this is accurate then it's also got that benefit of mechanical keyboards too.

With the keyboard offering an equivalent performance in the pressing of keys to that of a mechanical keyboard, what else is there to differentiate the SteelSeries Apex 5 from that of other keyboards? Well, it actually has a fair few features to speak of. The first thing that will be immediately noticeable is that the keyboard features per-key RGB lighting. The keyboard is an attractive looking piece of kit, with an aluminium frame reflecting the illumination brilliantly.

With the aluminium frame comes a good feeling of durability for the keyboard as a whole, not just the keys. With the frame comes a groove for cable-management, offering three directions for the exit of the cable - giving you a nice option which I can't say I notice on many keyboards. SteelSeries also packs in a magnetically attachable wrist rest with the keyboard. It's a great little feature, particularly for a keyboard at this price point, but I'm not going to say it's the best wrist rest I've ever used. It looks good, working perfectly well with the keyboard, but it isn't the most supportive - there's no padding - just a soft coating, but it offers a surface that reduces the angle of your wrists.

There are a few other extras that are worth talking about too. The Apex 5 doesn't add on features like macro keys - though the software does remedy that to an extent, we'll talk more about that later. This isn't to say that there are no extra features, at the top of the keyboard comes an audio wheel and a button which acts as play or pause, skip or fast-forward and also skip-backwards or rewind - all with a single key that you press once, twice or three times in succession. It's a nice feature, but I only used it for playing and pausing when it came to actual use, not testing.

Alongside these multimedia controls comes a little OLED display that you can, using the software, adjust to show an image of your choice. Granted, this is just in black and white, and the space is very limited, so you'll mostly find yourself just using your clan tag or, in my case for this review, Wccftech. The other benefits of the OLED display are that it can link into other applications, like Discord, to show the person speaking in your channel.

It's a nice little feature, though not once that I use much - I simply have the discord overlay to show who's talking, not that I don't know my friends by voice. In-game events that can be shown are also better shown via an in-game popup. But as with the RGB lighting and all other aspects, this is controlled via the downloadable software.

SteelSeries Engine, that's what it's called. As the name implies, the software is the engine that will run through and let you set up and modify all of your SteelSeries peripherals. Like the Rival 3 before it, the software allows you to work through multiple profiles and configurations - certain ones that are saved on the keyboard itself. You'll be changing the per-key RGB lighting, the OLED display image and even modifying each and every key with a recording function.

SteelSeries Engine and the Apex 5 also links with multiple different games and pieces of software via what the company call Engine Apps. Discord is one I've already mentioned, but should you want to - you can link with titles like DOTA 2, CS: GO and Neverwinter to name a few. It's possible that more can be found but it relies on you or others developing them. A nice feature that can certainly increase immersion for specific titles, but limited for now.

I should say there are a few minor issues. Caps & num lock have no way of identifying if they are active or not, a glaring omission - surely it wouldn't be hard to simply light these keys differently to show their activation? A minor issue, but I try to avoid capital letters when I can avoid it. I've also mentioned the lack of macro keys, which would have been nice but far from a dealbreaker.

Edit @ 21:26 GMT - A comment pointed out that the two locks, when active, glow a bright white when activated. Having checked it out, this is correct, I was simply not observant enough. You can actually customise the colour. This has not impacted my review score in anyway as the point was always made as a minor niggle. The issue has now been removed from the cons list for accuracy.

All things considered, I can't help but celebrate the SteelSeries Apex 5. It's an affordable keyboard that offers the functions and reportedly the durability of a more expensive, purely mechanical keyboard. While it isn't perfect, the wrist rest could be more comfortable and the multimedia options could have certainly been less of a multitasker, for the price and quality I can't help but really like this keyboard. It's certainly one I'd recommend for those who don't want to break the bank and want something that won't let them down. 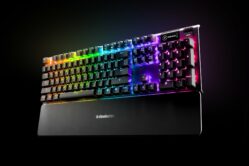 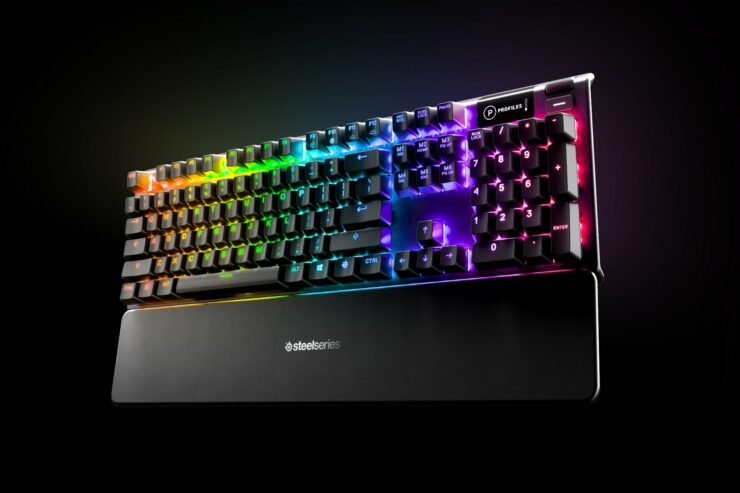 The SteelSeries Apex 5 is a very strong outing from SteelSeries, offering an affordable keyboard giving most of the best features from a mechanical keyboard but at a lower price than other similar keyboards would come at. Linking in with a strong piece of software (SteelSeries Engine) which adds to the list of features the keyboard has, there's a lot to praise here. There are some slight issues such as the wrist rest and multimedia options but these are far outweighed by the pros.