A good gaming mouse is something we all need. One that doesn't break the bank is even more valued by people who are looking to get something of high quality, something that will last them through marathon gaming sessions, all at a reasonable price. SteelSeries are looking to offer this with the Rival 3 gaming mouse. Priced at just £34.99, you're not likely to many offerings from large names at this price range. It's certainly affordable, cheap even. The question then is how does it compete with the more pricey offerings out there?

After having used it for the past few weeks, with a hell of a lot of use this week thanks to the COVID-19 lockdown, I can say that the SteelSeries Rival 3 stands up well against much pricier mice, with a surprising number of features. Though it has to be said, there are some aspects that detract from it.

If you were going to describe the SteelSeries Rival 3 to somebody, you'd have to say it's a strange mixture of cheap and flashy. The mouse is a plain black matte plastic shell. It's got the usual five buttons you find on most mice now, with the ever-more-frequent extra one for flicking between four programmable DPI settings. Despite the fact that it can look cheap due to the shape and size, that's mitigated by the fact the mouse has lovely LED lighting across the bottom rim of the mouse and for the SteelSeries logo.

What makes me think the mouse looks and feels on the cheap side is the fact that it's got no features to speak of at all. There are no finger rests, no rubber grips at the side of the mouse, nothing to really promote the mouse as more than 'a mouse', nothing aside from the aforementioned LED. As a result of there being nothing, it's hard to get away from a sense of it being flimsy, with the smaller size just adding to that. In addition to this, the cable is also plain rubber rather than braided.

Due to the shape of the mouse, people like me with larger hands may find it uncomfortable over long sessions, depending on how you like to grip the mouse. Personally I prefer to go for a palm grip, this is just a little too small to comfortably go for that with my fingers hanging over the edge of the buttons at the best of times. I've resorted with a fingertip grip most of the time, just for comfort. Smaller or medium-sized hands, this wouldn't be an issue at all.

So what of the other components? This is where I have a bit of an issue with the SteelSeries Rival 3. The sensor offers a maximum of 8500 dpi and gives up to 300 inches per second accuracy. Can't complain at all for a mouse at such a low price point. However, what I can complain about isn't so much that the sensor offers some cursor wobble if you happen to pick the mouse up, it's that it gives cursor wobble almost permanently.

One thing I noticed while watching films and shows in full-screen on Amazon Prime Video is that the information kept popping up. I thought it was an issue with Firefox, tried different browsers. Same issue. It was only when I got to writing on here that I noticed that the cursor had a slight wobble, despite the fact that there was no movement from the mouse, mouse mat, the table or the floor beneath my house. The only way to stop it was by flipping the mouse onto its back.

I suppose what I'm saying is that while the performance of the sensor is great for the most part, you'll have no issue with general use or when gaming, it can be very bloody annoying when you're just trying to lay down and watch some TV or a film. I don't want things randomly popping up when they don't need to. Somebody needs to keep the SteelSeries Rival 3 away from the caffeine.

Fortunately, while the sensor could be best described as wobbly the buttons, wheel and everything else feel sturdy. Sturdy enough that they seem more valuable than the price of the mouse would imply. While the size and basic nature may make you think it'll be flimsy, the mouse can take a fair bit of use. It'll also withstand a few smacks into the table as well as my fist hitting it a few times. Just testing its strength, I wasn't getting frustrated with my games at all.

At least it wasn't due to the mouse. No matter what game I played, the SteelSeries Rival 3 performed better than you could honestly expect a cheap mouse to. It's smooth, responsive and there were no misclicks, no jumping over anything I needed it to. The timing was perfect and from Apex Legends to Total War: Three Kingdoms and Doom Eternal to Plague Inc: Evolved, it was great to have a high-end performance from a lower-end mouse. If only the issue didn't exist when watching shows.

Outside of the hardware, SteelSeries has provided a very good bit of software. It's nothing special or extravagant, but what it wants to do, it does it well. You can customise up to five different DPI settings, up to the maximum of 8500, as well as remapping all of the buttons on the mouse as well as creating macros. In addition to remapping the buttons, the application allows you to adjust the LED lighting on the rim of the mouse, with the mouse being divided into three different sections, adding to the customisation.

Without any shadow of a doubt, there's a lot to praise about the SteelSeries Rival 3, particularly when you remember that this is one of the cheaper gaming mice out there. The lighting makes the mouse look a lot better than the price, shape and size of the mouse would indicate at first glance. It's sturdy enough as well when you're using it, with a slight issue of comfortability for those with larger hands. Still, it's hard to deny that this is a very strong all-around mouse, particularly for the low price of £30/$35.

Provided by SteelSeries for review purposes. 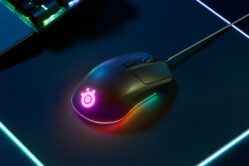 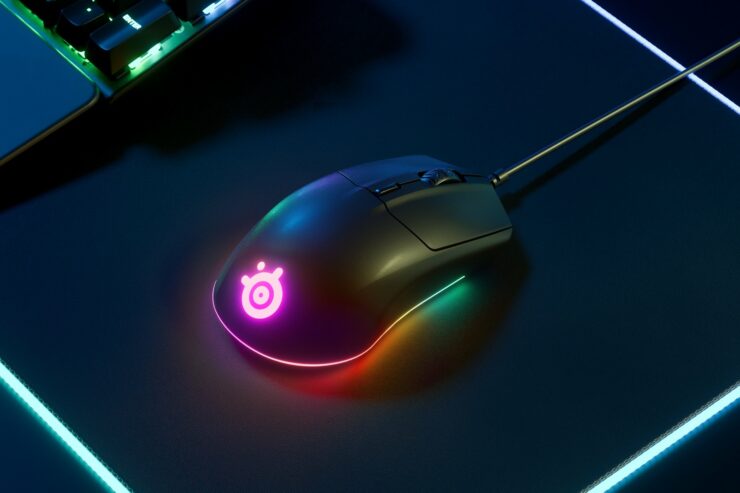 The SteelSeries Rival 3 is a budget mouse, costing just £35/$30, but featuring some elements that would normally appear in mice of a higher value, such as attractive LED lighting. It is, however, on the small side, with a flimsy unbraided cable and with a sensor that sadly has a continuous, if only slight, wobble which interferes with certain full-screen applications like Amazon Prime Video. All things considered though, it is still a good mouse and well worth the price.