For some, piloting the USS Enterprise has been a childhood dream. Games have only teased such an experience, usually in the likes of an MMORPG or strategy title. With the recent release of VR devices like PSVR, Oculus Rift, and HTC Vive combined with multiplayer services across PC and PlayStation 4, that dream can finally become a (virtual) reality. Red Storm Entertainment’s Star Trek: Bridge Crew has been a mainstay of my VR gaming since it came out last month and I couldn’t be happier to be a member of the crew.

Star Trek: Bridge Crew shines most when you can join up with some like-minded individuals online and engage with a full party of four. Being knowledgeable the lore and roleplaying is helpful, but not essential. Of course, if you plan on taking the Captain’s role, being comfortable with giving orders on the fly is a job requirement. Thankfully, if you’re playing Bridge Crew on a Playstation VR, you already have a solid microphone built into the Playstation Camera. But if you’re like me and prefer to take a more supporting role, even just giving a quick ‘yes, sir’ is enough. After all, Star Trek: Bridge Crew is meant to be a social experience and putting your life into the hands of your fellow crewmen (and women) is going to be a bad time if you’re all playing in silence. 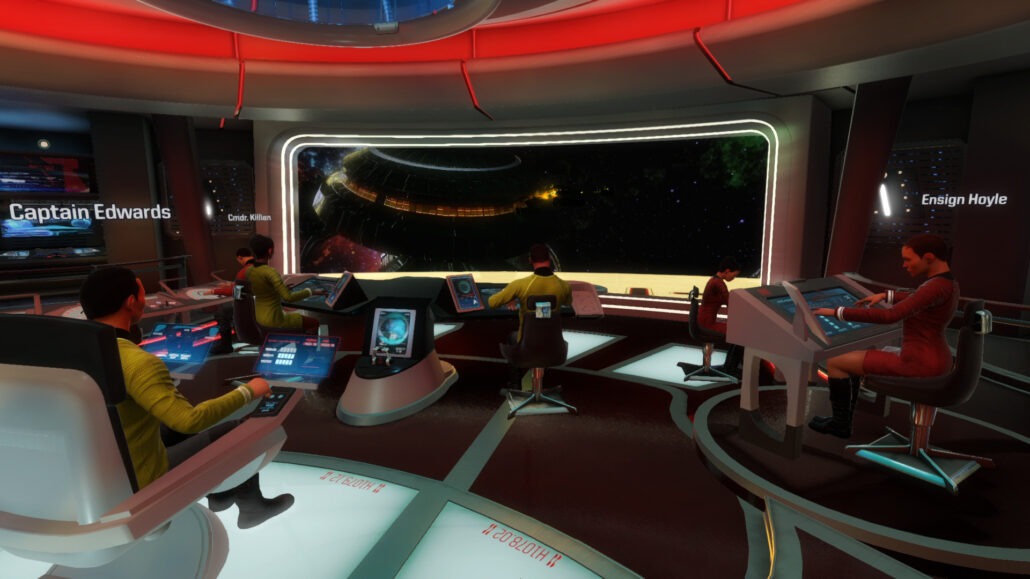 If you feel like giving your vocal cords a rest but still want to pilot the USS Aegis, Star Trek: Bridge Crew offers a complete single-player experience, which also serves as a good training ground to get the hang of each role before playing online. Trust me, the last thing you want is to be the navigation officer and not have any idea how to pilot a Starfleet vessel. Bridge Crew isn’t the most enjoyable experience to play by oneself, but there are a few novel steps to make managing a four-person crew. Players can either issue commands from the comfort of the captain’s chair through a smart radial menu, or if you want to take a more hands-on approach, jump right into that role at any time and steer the USS Aegis firsthand.

No matter what role you take aboard the USS Aegis (or Enterprise), know that you’re never going to be alone in your duties. Say you want to initiate an Impulse Warp. You’ll need the Captain to plot a course, Engineering to power up the engines, and a Helmsman to navigate the vessel towards the warp point. There might not be the complex subroutines to barking out orders and keeping your ship from obliterating in SpaceTeam, but when the crew finds their groove and can piggyback orders off one another, the flow of missions feels so utterly satisfying.

Many of the missions in Star Trek: Bridge Crew should feel familiar to fans of the classic Gene Roddenberry universe. It was a smart move having newly minted Starfleet Academics to take the Captain’s mantle and engage in the most famous of no-win scenarios: The Kobayashi Maru. Beyond that, a score of both campaign scenarios and randomly generated missions provide a nice assortment of combat trials for the bridge crew of the USS Aegis. 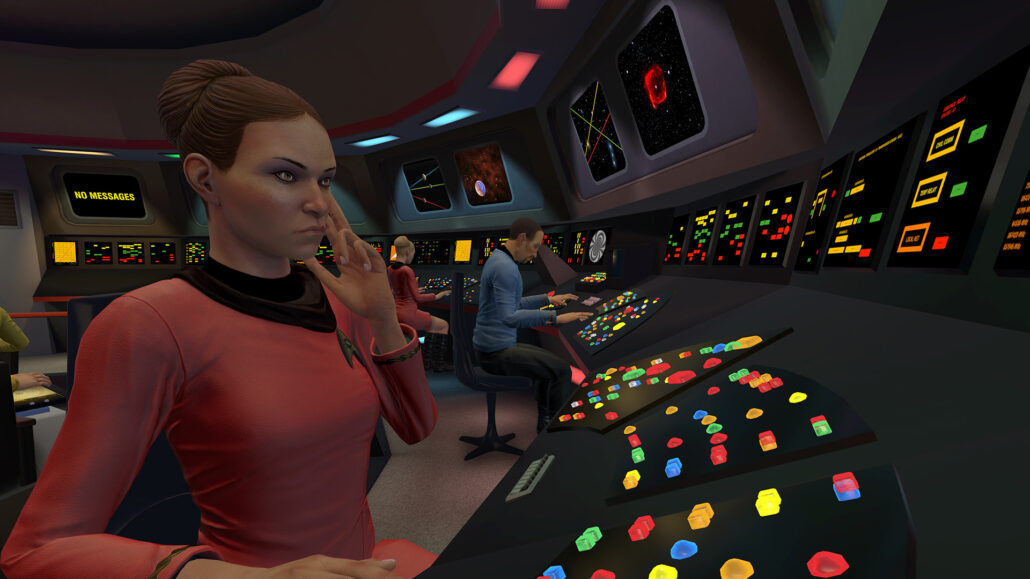 Ubisoft does a phenomenal job of solving the issue with motion in a VR title by making Star Trek: Bridge Crew a purely seated performance. However, depending on the type of chair you want to issue commands from, the positional tracking might be a little off. I, myself, have some fancy hipster chair from Ikea (a POÄNG if you must know) that’s essentially a rocking chair that leans back more than Red Storm might have intended. To compensate for this, I found a novel trick to sit up higher above my seat and reset the camera by holding in the Options button before sitting back down. Without that, I’d otherwise have to hang my hands off the sides of the chair to touch the control panels on the Captain’s chair. It can be a bit of an inconvenience the first time you boot up Star Trek: Bridge Crew, and hopefully Red Storm can patch in a proper solution in the future, but I surmise that it only affects those of us virtual Starfleet members that don’t have a standard chair to play from.

From a comfort standpoint, Star Trek: Bridge Crew is one of those rare VR titles that can be enjoyed for long periods of time. Being a seated experience helps, but even the action operates at a slower pace to be more comfortable for the entire crew. A game like RIGS where the action is constantly zipping around and players have to be aware of every angle is best played in brief sessions. Star Trek: Bridge Crew, on the other hand, is meant to be a much more relaxed style of game, even when wrestling with multiple tasks at once. It might not be on the same level of complexity as Spaceteam, but juggling multiple objectives from the comfort of your chair feels quite well for this VR-exclusive.

While Star Trek: Bridge Crew on the PlayStation VR offers the use of the DualShock 4 controller, the true immersion is best handled with a pair of Move controllers. Physically reaching for the controls or sitting back and responding to a hail feels more immersive when you have to physically reach out and go through the motions. As long as you’re not playing on the vintage USS Enterprise, the controls are pretty large and easy to navigate around without requiring precise control. When you’re juggling between powering your shield, loading up your photon torpedoes, or rerouting power to the engines to initiate an emergency warp, being able to move about quickly and hit the controls you need is essential. That sort of quick reflexes is just something I couldn’t see myself doing on the DualShock 4 controller for very long. 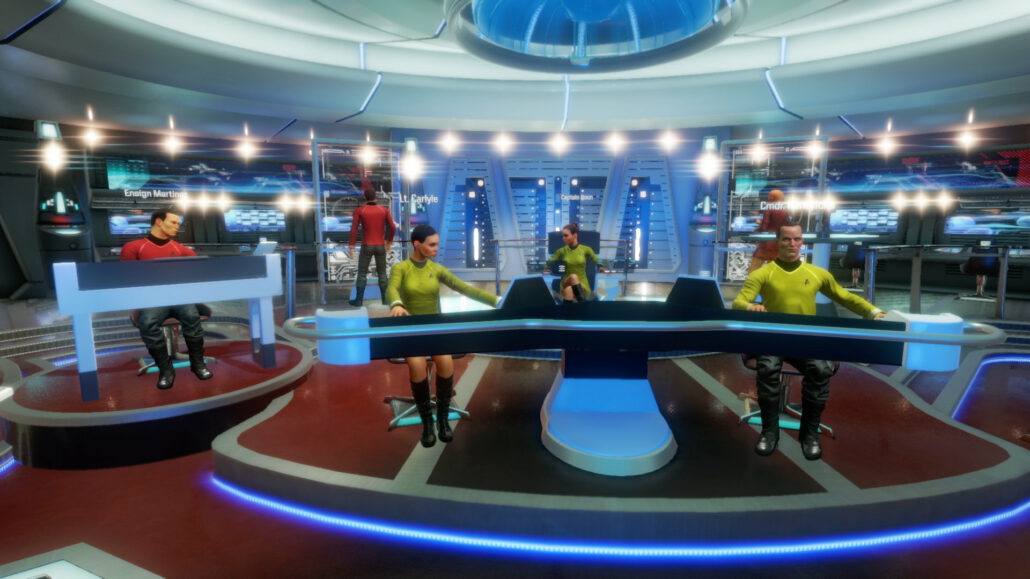 There have been a few multiplayer experiences that I’ve enjoyed on the PlayStation VR, but none capture the magic of cooperation in the same way that Star Trek: Bridge Crew has. Whether you’re on the HTC Vive, Oculus Rift, or Playstation VR, you’ll all be able to share in the experience of being a Starfleet Academy elite and share in the duties of heroic missions. In the case of PlayStation VR, being equipped with the PlayStation Move controllers and a good headset for crew banter is simply the best way to play. Players flying solo might not have the same experience online, so take that into consideration before you consider Star Trek: Bridge Crew as a must-play title on PSVR. But if you’ve always wanted to sit in the Captain’s chair of the USS Enterprise, Star Trek: Bridge Crew will be your chance in a lifetime.

Reviewed on PlayStation VR (code provided by the publisher). You can buy the game via Amazon.

If you can find some like-minded friends to join your adventures fresh out of Starfleet, Star Trek: Bridge Crew makes for a great social experience. Those that opt for a more single player experience might find themselves missing out on the magic.