For a long time now I've been a fan of horror, be it on films, games, novels or the odd zoetrope. There's something about that primal urge to get the hell away from whatever creepy-arse place you happen to be in, or thing that you happen to be near. For the most part, media doesn't seem to be able to create that level of tension anymore, not to the level of Silent Hill 2, Alien: Isolation or Amnesia: The Dark Descent in games or The Shining or The Ringu trilogy in films. If there's something that can be said for Song of Horror, it's that it's certainly closer than most horror games of late.

One key element of horror that is completely misunderstood by so many titles of late is light. Just because something is dark, doesn't make it scary. At the same time, the correct use of light and dark, shadows, letting things play tricks on you can really mess with your head. Then you bring in sound. Song of Horror, while not featuring many songs in the first few chapters, makes masterful use of both light and sound and certainly brings the horror.

What initially interested me with Song of Horror is, as I said quite recently, the fact that you take on the role of multiple people. Now, I can't exactly attest to the idea that each character has their own perspective on the story. Sure, in the first episode one character you can use is married to the servant of the house, another is the editor of the author who lives in the grand house and so forth. This gives them slight differences in who they may mutter here and there, also they may have their own abilities (such as the ability to read Russian), but there's nothing truly game-changing.

Well, not in the way that you can get a major advantage. The only aspect of the characters that are different are their stats and, potentially, a character-specific trait or item. If anything, it's these abilities or items that could be considered as game-changing. Etienne, the editor, makes notes and as such writes certain things in his notebook. Alexander, a man after my own heart, carries a hip flask. A swig helps calm him down in the most unnerving of situations. There'll be a few of them.

One promise made by the game is that of an unscripted entity of sorts. An entity that will learn from the way you play, adapt to your actions and figure out a way to kill you. Well, either kill you or leave you wanting to find the nearest toilet because you've just had a whoopsie. Developers Protocol Games have hit it right out of the park here. I genuinely can't tell if something is scripted or not and (I failed in my first playthrough of episode one) different things are happening at different moments.

For example, in my first playthrough, I lost a character in what I was certain was a scripted sequence I failed. The second time around, same character, no sequence. Not knowing what to expect has left me on-edge when playing this, something that the vast majority of horror games only manage in the sense that they leave me on the edge of my patience. Here, I'm on the edge of my seat and about half ready to run away from my PC, because I'll be damned if this entity is reaching through my screen and grabbing me. I'll glass it with my bottle of scotch - after drinking it of course.

The Entity isn't the only thing that Song of Horror does to keep you on edge, with the game utilising a number of other aspects to keep you guessing and thinking. This can be from the changing of environments, such as a host of creepy drawings appearing on a wall, to even the actual image on a photo changing as you turn it over. That and as you progress through the chapter of the game, unlocking more rooms and areas, as well as new items and puzzles appearing as you look to work out the particular mystery you're facing. It also helps that the characters react by visibly stumbling and showing fright as these sometimes random events occur.

As I said earlier, one selling point of the game that has seemingly been integrated is the actual AI of the entity. The fact that it moves through the environments, be it the mansion in the first episode or elsewhere later, you'll need a way of not falling into its grasp. This is where the use of sound is crucial to the game. There's a mechanic where you can press your ear to a door, listening to sounds on the other side of the door. Is there a groaning or crying on the other side? My recommendation is to go the other way and leave well alone.

Now, this is a core element of the game and does lead to some issues. Your best experience with Song of Horror is in a quiet environment so you can actually listen out for these sounds, as well as others within the game. Fortunately, there is an option that simply displays something on the door if you're hard of hearing, so there isn't a lack of inclusivity here. This does make that aspect of the game a little too easy though, but it solves the issue of either playing in a noisy environment or any other impediment.

Continuing with what are detractors within Song of Horror, I can't help but talk about the puzzles. There's a bit too much adventure game logic here. You can be sure that you've got the right items for a puzzle, such as in the first stage setting a fire, you've found some wood, got some matches and even a dry cloth. No, you need a specific item to burn, the cloth has another use. It can also be confusing as to where you should actually go in the game, with a hell of a lot of backtracking, looking for one small clue or item.

Fortunately, the game does have a map which highlights unsolved puzzles once you've actually found them, but it doesn't prevent the fact that you've got to essentially play hide and seek with the myriad of different items within the game, be they actual collectible items or just something to have a look at within the game, adding to the world-building.

All of this amounts to an enjoyable horror game, despite any backtracking you may need to do. Aesthetically and audibly, the game is top-notch. It looks on par with 'AAA' quality games, with the use of enclosed, claustrophobic spaces to further set you on edge. I suppose my only complaint when it comes to visuals is more the fact that the game only supports traditional 16:9 aspect ratios. The other stand out point is silence, a silence broken up by the heavy breathing and heartbeat of your character - to that point, there is an aspect in the game where you have to press buttons in line with your character's heartbeat to try to calm them down when under attack from the presence.

Simply put, Song of Horror is a top-quality horror game that, while slightly set back with some repetition and adventure-game logic, has all the atmosphere and story to keep you well on the edge of your seat. Releasing on Halloween, the 31st of October, the game will have two out of the eventual five chapters. I've played the first two episodes, with the third releasing in December, the fourth in January and the final episode in March. Even at this early stage, with two-fifths released, I'd already say Song of Horror is more than worth your time and money. 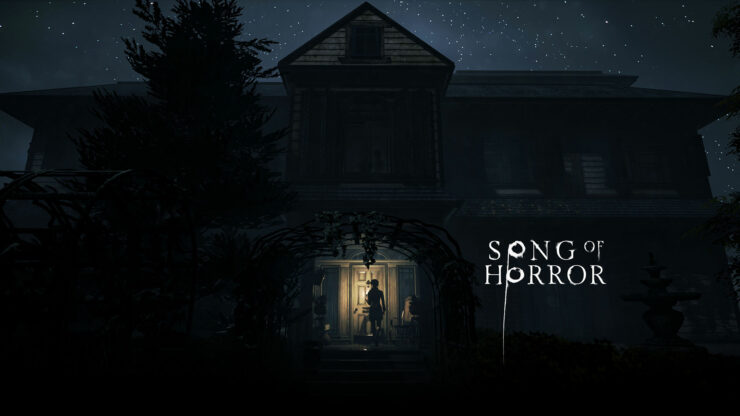 Song of Horror is a genuinely atmospheric, creepy horror game, with the major selling point of an enemy that you're never actually sure about. The advanced AI system of the horrors you face, combined with sound, visuals and other game mechanics make for one of the more engrossing and captivating horror titles of recent memory. There are some faults, such as backtracking and a bit of adventure game logic when trying to solve puzzles, but these do nothing to stymie everything Protocol Games are bringing to the table.