Bundling classic arcade games has become a theme lately. Arcade titles are possibly the most ripe and relevant for ports. Unlike console games which these days are often released and re-released time and time again, it's not like you can actually just pop down to the local arcade to play arcade titles of yesteryear. I mean, even if you still actually have a local arcade, what are the chances they have a bunch of machines from the 80s in working condition?

It's for that reason I can't possibly begrudge companies for packaging multiple arcade titles together for a new generation. It's good for preservation and offers an important bit of perspective for gaming history to brand new players. So when former arcade giants SNK announced the SNK 40th Anniversary Collection, well, it's easy to get excited, right? 40 years worth of arcade classics? Sign me up right here, right now.

Or at least, that's what I was thinking before I got to grips with the SNK 40th Anniversary Collection. Ultimately, the value of these titles is going to be perceived a little differently by each player, but as for myself? Questionable.

Similar to Capcom's Street Fighter 30th Anniversary Collection and Capcom Beat 'Em Up Bundle, the SNK 40th Anniversary Collection offers a bunch of retro emulated titles, in addition to a gallery of unlockable classic artwork for players to peruse. To add more value to the bundle, the games which were ported from arcades to consoles also have their console versions included, which for all intents and purposes often look and feel like completely new titles. Throw in the option to play international or Japanese versions of the games, and there's a decent amount of variation here.

On the subject of variation, let's list off those games you can play right now…

Right so, honestly, I feel you'd be forgiven if you're not all that familiar with these titles. I sure wasn't. The older titles in the list too, like 1981's Vanguard, are difficult to play in the modern era. Even with save states, infinite continues, and the ability to rewind the game a few seconds (thank you SNK) it's hard not just to play, but to enjoy. If you were in arcades in 1981, you might have waves of emotional nostalgia while playing this game, but if like me you weren't born for at least another decade, well it's a bit more… Unappealing.

The King of Fighters XV Gets Crossplay in 2023, Samurai Shodown Getting Rollback Netcode

Other titles are a fascinating look into gaming history. Guerilla War, for example, has images of a Fidel Castro lookalike in its promotional material. In the 80s I'm sure this was very timely and possibly even controversial outside of Japan, but removed from that time period, it's just an interesting (if a bit odd) example of how games were years ago. Prehistoric Isle feels like another unusual product of its time, where you fly through an ancient island on a small plane, shooting the living hell out of dinosaurs and prehistoric humans.

I hope you like top-down shooters because the SNK 40th Anniversary Collection has a few of them which play very similarly, from Guerilla Warfare through to the three Ikari Warriors games. On that note, does anyone have an explanation as for why Ikari Warriors has you and a partner shooting through a warzone, and then Ikari Warriors II seems to start with you destroying an alien race? Not that I'm complaining or anything, things just escalated incredibly quickly.

But what if this selection of games doesn't appeal to you? Well, the good news is there are even more games on the way. In about a month or so. For whatever reason, the SNK 40th Anniversary Collection isn't actually complete yet but will be on December 11th. What's happening is even more classic SNK arcade titles are being added to the collection as a free download. Which is excellent. If a bit weird. You'd assume it'd be better to just launch the game after it has a full line up or titles, but who am I to judge. Oh yeah. A game reviewer.

The titles being added to the game next month are…

What are these games like? Will they be worth the wait? Well, I have no idea. I haven't played them, obviously. I'm waiting for them, just like you.

But when it comes to SNK's storied history, there seem to be a few key omissions here. Namely, SNK's fighting game lineage. In case you aren't aware, SNK are well known for an extensive list of fighting games they've developed, including Samurai Shodown, and of course their flagship series, King of Fighters. So where are all of these?

Ah, well, I think that can be answered if you're to check either the Nintendo Switch eShop or PSN. Quite simply, you can already find ports of many SNK titles, from both Neo Geo and Arcades, emulated and sold separately. I don't wish to be cynical frankly, but it leads one to believe that their omission from this collection is simply because those titles can attract attention by themselves, while the titles in this collection would be unlikely to sell by themselves, and can only be justified as a package. I can't say with any certainty that this is the case of course, but if it was far removed from the truth, I would be shocked. 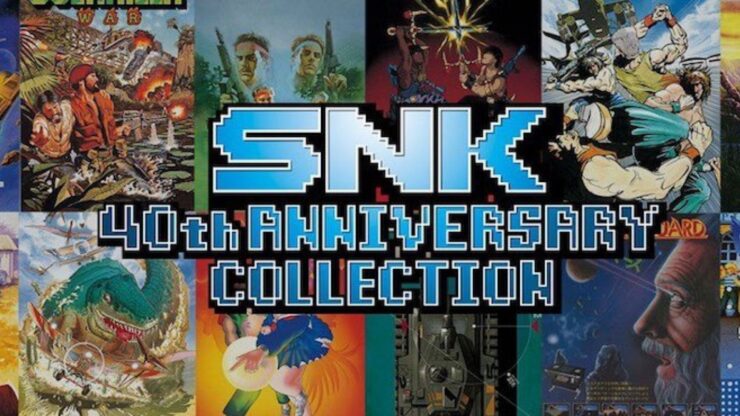 SNK 40th Anniversary Collection is an interesting package, but even with the upcoming titles to be added, I have to question its value. Luckily, this is not a full price package, but even then many gamers will doubt the value proposition, quite rightly. I'm not saying don't buy the SNK 40th Anniversary Collection, but whether you'll keep playing the game after a few multiplayer sessions with friends is questionable indeed.