Skully Review – Ain’t That a Kick in the Head

Video games and skeletons go way back. Of course, we’ve all fought countless skeletal enemies over the years, but they’ve also taken on protagonist roles in games like Grim Fandango, MediEvil, and even the recently-released Skelattack. Well, publisher Modus Games is bringing us a yet another entry in the bony sub-genre with Skully, which sadly doesn’t have anything to with alien abductions. Skully is instead a platformer that tasks players with guiding a very round, rollable skull through all manners of hazards. And just to make this as clear as possible, no, the skull isn’t a redhead.

Ahem, anyways, Skully is the work of Finish Line Games, who previously brought us the inventive and reasonably entertaining adventure game Maize, so do they roll another strike this time around? Or is Skully best buried six feet under? Let’s find out… 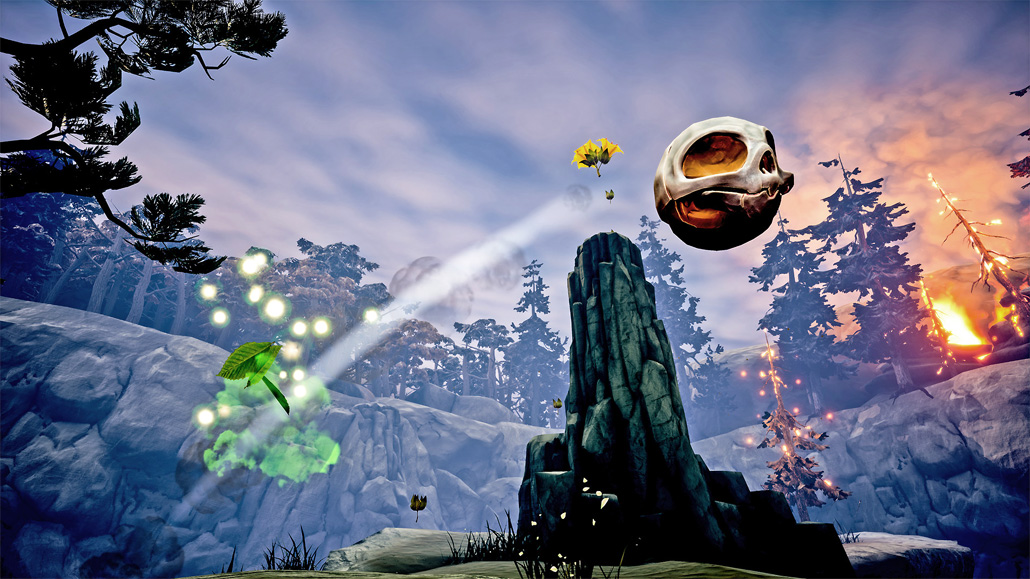 Skully begins with our titular head bone washing ashore on an unnamed island, where he’s brought to life via magical clay belonging a minor god named Terry. Yes, just Terry. Our down-on-his-luck deity is feuding with his siblings Wanda, Brent, and Fiona (at least they all have equally ungodly names) and wants Skully to help him bring about some sort of peace…through force if necessary.

Skully doesn’t speak, so all story is provided by Terry and his siblings, who narrate and comment on the action from some invisible cloud on high. Not a bad approach in theory, or at least it would be if all the dialogue wasn’t so damn annoying. Lines are generally well-delivered by a cast of veteran voice actors, but the tone is waaaay too chipper for what would otherwise be a rather subdued game. Terry and the other gods spend most of their time childishly bickering back and forth, which is the last thing you want to listen to as you’re prepping for a tough platforming challenge. There is some mystery about what exactly the gods are squabbling over, but ultimately, the story’s not terribly interesting, and lame still-image cutscenes don’t exactly pump up the excitement. 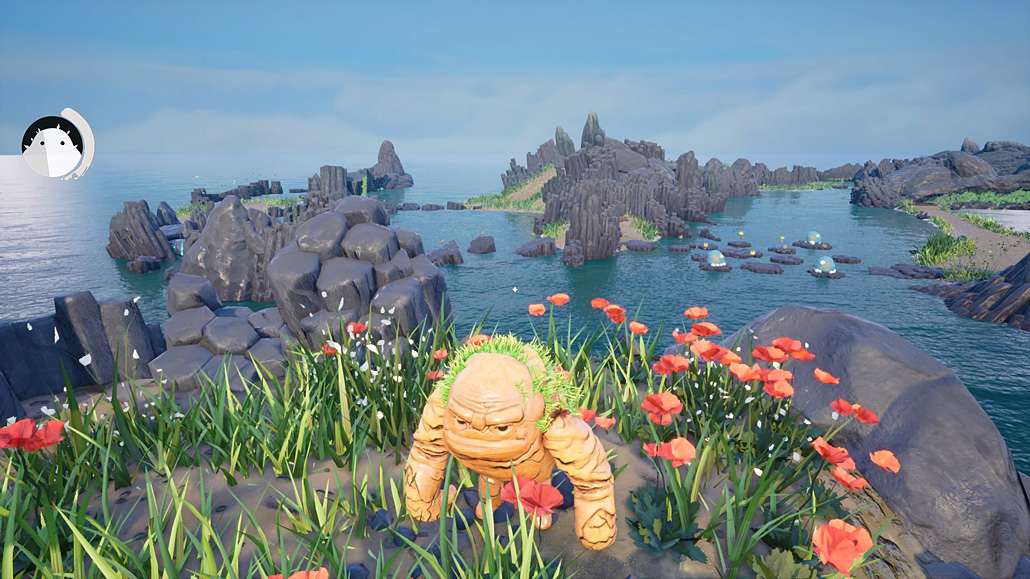 At least Skully looks nice when you’re actually playing the game. You’ll forge over and through windswept cliffs, murky caves, and boiling volcanos, all of which can be quite striking, although at times the game can feel a bit like an Unreal Engine 4 demo reel. Sadly, Skully’s characters aren’t as pretty as its backgrounds. Skully can transform into a series of larger clay forms, and I’m just going to say it – they all look like they’re made of poop. No, that’s not a euphemism. And the character designs aren’t the only crappy thing about this game.

In the tradition of Samus’ Morph Ball from Metroid Prime, Skully can roll, jump, and cling to certain walls when in his standard form. Using mud pits dotted around the levels, players can also transform into “Strong,” “Swift”, and “Vault” forms, each of which has their own unique powers – basically, Strong form is the muscle, with the ability to break through some walls and throw Skully over gaps, Swift can dash and move certain blocks along a horizontal axis, and Vault has the highest jump and can move blocks vertically. Skully can summon up to three of these alternate forms at any one time and freely switch between them, as long as they’re still in an accessible place. 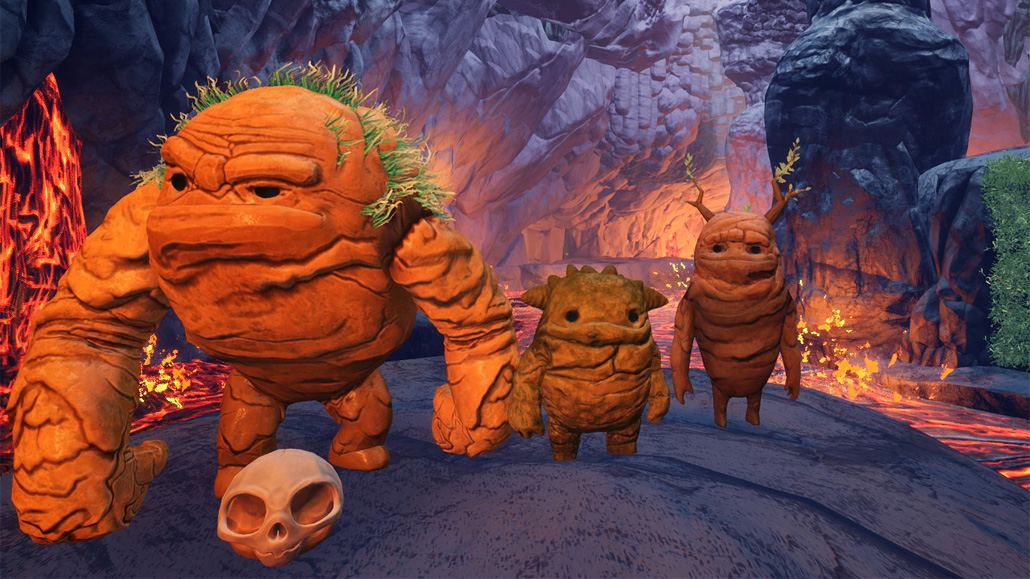 Having multiple forms may sound like a good thing, but three out of four of them are just no fun to play as. Skully’s basic form is too fast and unpredictable and the game’s weird physics will often send you spinning off in random directions or bouncing off ledges you’re tying to jump onto if you’re too close to them. Successful games like Metroid Prime, Marble Madness, and Monkey Ball specifically design their levels around the fact that players don’t have full control over their marble-like avatars, but Skully seems to revel in creating challenges that are as annoying as possible. Touching water kills Skully almost instantly, and the game packs its levels with watery hazards and small platforms, precarious pathways, and narrow ramps that are extremely easy to roll off of. Skully’s other forms are less frustrating to control, but Strong is too slow and clumsy and Swift’s jump distance is just short enough to be irritating. The only form that feels okay to control is Vault, given its decent run speed and double jump, and you don’t get to play as it until nearly halfway through the game. I suspect that was done on purpose, because as soon as you get access to the Vault form, you’ll want to default to it at every opportunity.

Unfortunately, it probably wouldn’t matter much if all four of Skully’s forms played like a dream, as the game’s level design is a complete train wreck. Platforms are placed carelessly and hazards often lack the standard visual warnings you see in better games – lily pads appear and disappear without any rhyme or reason, giant tentacles swipe back and forth without any clear indication of what their range is, ect. Proper checkpoint placement is an art, and this game makes a complete hash of it, either placing them insulting close together or way too far apart, forcing you to replay certain difficult challenges ad nauseum. Time and time again Skully breaks basic Platforming 101 rules that have been firmly in place since the original days of Super Mario Bros. and Mega Man. 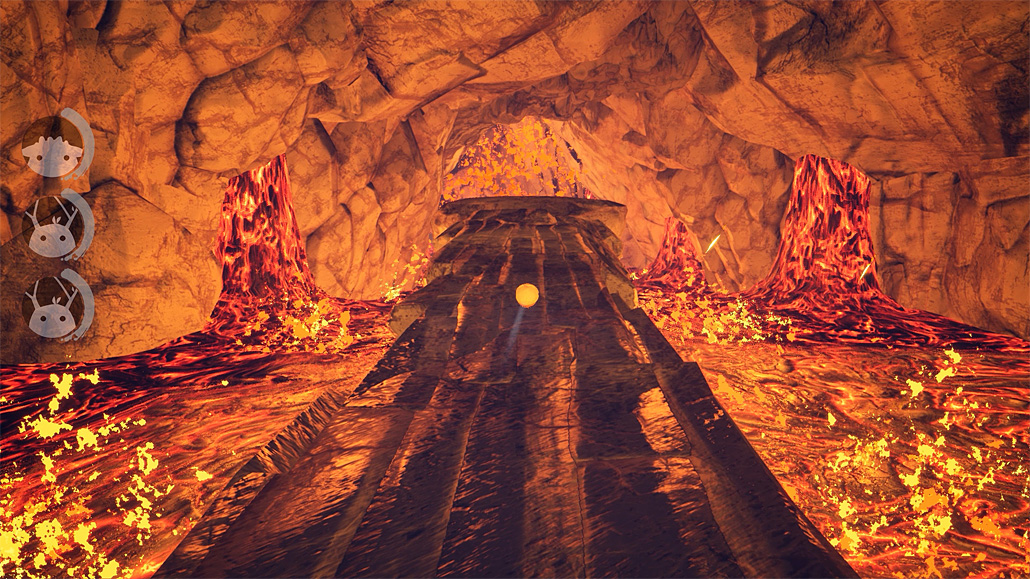 Skully’s lousy level design is made all the more maddening by the game’s awful camera. Granted, you’re given full control over the camera, but you also have to babysit it constantly. Don’t and you’ll find yourself continually ambushed by hazards and bottomless pits you didn’t even see coming. During some of the more intense action scenes later in the game you’ll spend as much energy readjusting the camera as you do controlling Skully himself.

All of Skully’s bad design comes to a head during its autoscrolling and boss levels. Each one of the scrolling levels is terrible its own unique way – one hard sets the camera at a weird angle and covers the screen with splashing water effects making it impossible to see what you’re doing, another makes your roll toward the screen as in the worst Crash Bandicoot levels, and yet another forces you to clamber up an endless series of rickety pathways while struggling with the camera as a volcano erupts beneath you. Meanwhile, the boss fights are awkwardly designed around platforming since there’s no real combat in the game and somehow manage to be both frustrating and boring at the same time.

Now, I’ll admit, once you’ve gained access to all of Skully’s forms and some of their secondary powers and the game starts to focus a bit more on puzzle solving, there are moments when it’s almost fun. Almost. While some of Skully’s puzzles are decently designed, too many rely on fussy mechanics, like having to throw Skully precisely over large distances, with death as your punishment for any minor mistake. Good puzzle games give the player room to experiment, but Skully stomps you the moment you mess up. 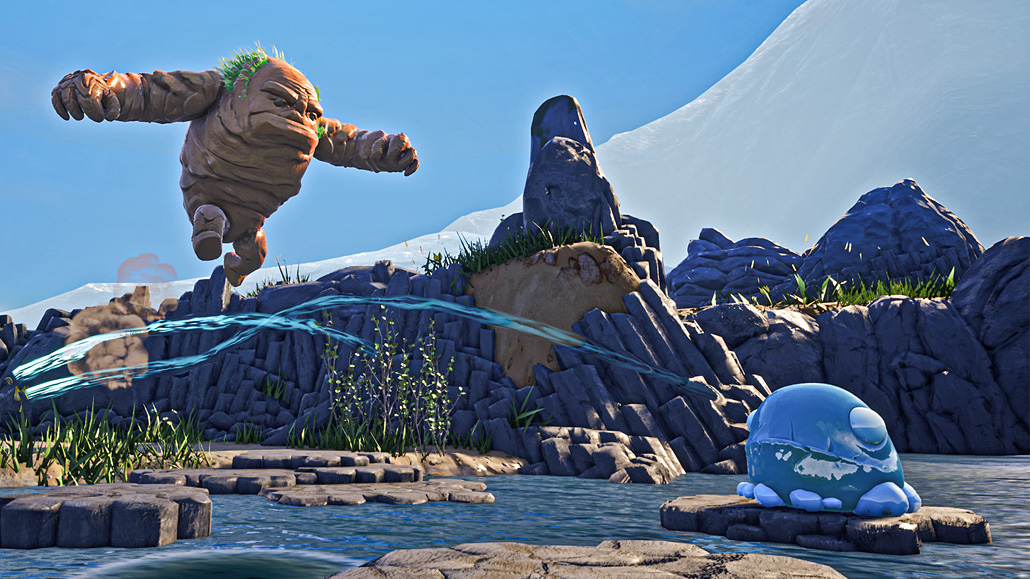 So yeah, Skully has a lot of problems, and the sad truth is, even without all the issues I’ve listed, the game wouldn’t be anything particularly special. It doesn’t do anything we haven’t seen a million times before. Playing as a rolling marble? Switching between different forms? Moving block puzzles? Done, done, and done. Forests, swamps, caves, and volcanos? All the level themes have also been done. You could replace Skully with a basic blue ball and rename this game Generic Platformer #2918. Heck, that name would probably get more attention than “Skully.”

While I strongly suspect many players will ragequit Skully before they reach the credits, you’ll get around 7 to 10 hours out of the game if you endure to the end of its 18 stages. If you’re looking for more pain, you can go back and try to grab all of the game’s collectible flowers (there’s thousands of them), but for the sake of your sanity, I suggest you don’t bother.

This review was based on a PS4 copy of Skully provided by publisher Modus Games. You can pre-order the game here.

Skully is a masterclass in bad platformer design. Characters that are a chore to handle, sloppy level design, lousy camera controls, irritating puzzles, and a general lack of personality combine to create a profoundly tedious experience. If challenge is literally all you care about (even if it’s wildly unfair), Skully might be worth a shot at a steep discount. Everyone else should spare themselves the headache.