I've rescued a fourth person, bringing them to my keep. My travels at night, scrouging the city for resources to help with the keep's defence, have proven fruitful. I've rebuilt a trebuchet and have the ability to craft weapons and armour for the soldiers defending the keep against attacks that happen every three to four days. The attacks are getting to the stage now where the only threat is if a fire arrow hits one of my chickens. This is my life in Siege Survival: Gloria Victis.

This wasn't always my life. It all depends on how productive you are. Other times I've found myself with a shortage of people, just making my way through, sometimes even struggling to get by. How lucky you are is often a big factor, as is your memory, since there isn't much variety found within Siege Survival: Gloria Victis. In my preview, I gave it the tagline of "This Medieval War of Mine. In reality, it feels more like a raid than full-scale war.

Let's talk setup. Siege Survival has six scenarios which are, in reality, one game mode with a few tweaks. You'll want to play the story first, offering you a tutorial and a steady sense of progression as you're defending the keep from ever-escalating attacks by the invading army. In the basic scenarios, you also have "quick start", which avoids the tutorial and gives you a different starting character. There's also "explorer", which gives you an easier time on the economic side, letting you go through the story easier.

You may have realised that the keen-eyed of you may have realised that adds up to three scenarios, but earlier I mentioned there are six. Well done! The other three are challenge scenarios, these being scavenger, defender and an unlockable scenario called survivalist. You can also create your own scenarios and edit aspects of the main scenario in new game plus, but I'm not including either of those in my list of six.

The reality is that the game doesn't change in any major way, no matter which scenario you choose. The map is always the same. As for the differences: characters and events are in different buildings; some paths that required a torch, shovel or axe to get through no longer require them; the resources you find are in different containers to the other scenarios; the shortcut on the map you would start at for the night-mode changes. The sad reality is that due to the map being the same and lacking any procedural element's, the tension of exploration fades.

Siege Survival: Gloria Victis is quite disappointing, though it isn't bad. Having played a portion of the game during my preview, I was looking forward to a lot of challenge, tension and even some level of emotional attachment as with This War of Mine. There are some moral choices to be found, such as helping an older woman buy her relative or stealing the axe she is carrying around. Another can be if you finish off a gravely wounded enemy soldier or not. They all have some follow-up, though I can't say many are difficult decisions, and none of them really impact the characters you already have, aside from potentially giving them an injury that they'll shrug off in a night or two.

That's at night, while you're exploring the city and scrounging for resources. During the day, it is still a tactical challenge, keeping your people fed and watered and keeping the garrison of the keep fully resourced. Would I like a bit more visual feedback on my progress? Yes, I would. It would be pretty cool to see more rubble around, maybe a bit of blood and an injured soldier lying down under cover when such things are applicable.

I would also like to see the results of failed enemy attacks too. Maybe pop a few corpses around the keep, particularly when I've managed to build up the trebuchet, and I'm firing out at the enemy, the game telling me that I'm taking out a few of them and making the battle easier for the soldiers. On the trebuchet, it's actually one of the more interesting aspects of defence as it also requires you to be smart during the day and night. Keep at least two people rested. One needs to go out and fill up the jars you've crafted with tar; another needs to scout the enemy lines, so you know where to target when the enemy attacks.

Speaking of the enemy attacks, I would like the game to not be so vindictive at my success. When you're resupplying the keep and its defenders, you'll have to manage three things. First are the armaments, you crafting or repairing weapons, ammunition (arrows) and armour. Second are the physical defences, using rocks from enemy artillery and crafted bricks to shore up the walls. Finally, there are supplies, keeping the soldiers fed and watered. Also giving them bandages if any happen to be injured.

So, why did I say vindictive? Well, the reason is that when the enemy is lobbing artillery into my keep, normally, I would be able to salvage some of the rubble for rocks to use when reinforcing the walls. There's no other way to actually get rock, something that is pretty damn essential as one half of your defensive component, and the game failing to leave any rubble sets my defence back. Not enough that I can't win, but enough that it irritates me. A small complaint, but one I had to make.

I've already covered other complaints, such as the lack of emotional impact to a game that clearly needs it due to the setting and the minimal replay value due to how everything is set out. Another issue is that the game is just a bit bland. The setting does limit this; it's a medieval city being sieged by Vikings. Well, things that look like Vikings. Swords, shields, rotten corpses, rubble and a whole lot of brown. I like my medieval things, but I think the lack of visible impact you have is another thing keeping this from becoming great.

Even with these issues, I can't help but like Siege Survival: Gloria Victis. There is an undeniable tenseness about prowling the streets at night, trying your best to avoid being murdered by the enemy while scrounging for resources and survivors. It's also an engaging race against time when crafting during the day and the constant race to supply enough food and water, though this becomes easier when you have farms and water collectors. It's just getting to that stage.

In addition, as much as I've already stated that there isn't much emotional investment to be found, there is some. The world and character building here can be engaging, and a few times, I've found myself actually caring about the result of an event, not only because it means I could get a better reward. Even now, I'm still curious what happened with a barwoman who I rescued from a group of enemy soldiers by simply throwing a rock through the window, knocking a soldier out and causing a ruckus.

Recommending Siege Survival: Gloria Victis comes with a far few caveats. If you're like me and you like your management games, this will be the sort of game for you. If you like your medieval settings, this will give you something to play, and you will enjoy it. Just remember that it's not a game with unlimited replay value, though I can't help but see the potential, taking this game style to various cities and locals. I can't give it any points for what could happen, but let's hope they're listening. 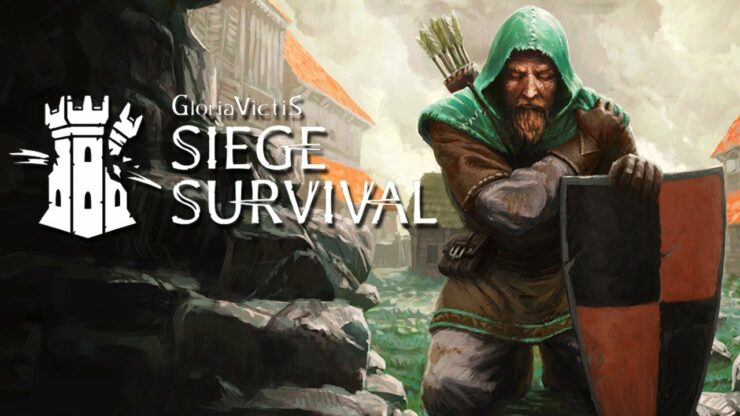 Siege Survival: Gloria Victis is a game that manages a sort of reverse synergy. The parts should combine to make this a medieval version of This War of Mine, a title that so clearly inspired it, but sadly fall short due to issues like limited replay value, lacking the emotional investment, despite the world and characters being decent enough. Still, for every negative, there are positives. Exploring the city at night for resources can be very tense; siege defence is engaging, and the crafting is top-notch. Consider this a recommendation, but one with more than a few caveats.