Unfortunately, there are not many places for shonen anime games to go, at least, not on a budget. Not every franchise gets the kind of high quality love that Dragon Ball FighterZ received and rarely do anime games have the kind of scope seen in the upcoming One Piece: World Seeker. But a small scale doesn’t mean games like The Seven Deadly Sins: Knights of Britannia can’t deliver the kind of experience fans want.

What we have here is a fairly standard anime arena brawler with a small variety of modes, and a fairly chunky story mode to go along with it. Not only that, but you can use the characters you unlock during the story mode to fight against friends in a local versus mode. Pretty neat! It’s the kind of game where it’s fun for a while to bash away at enemies, but if we’re being brutally honest, the fun doesn’t last long enough. 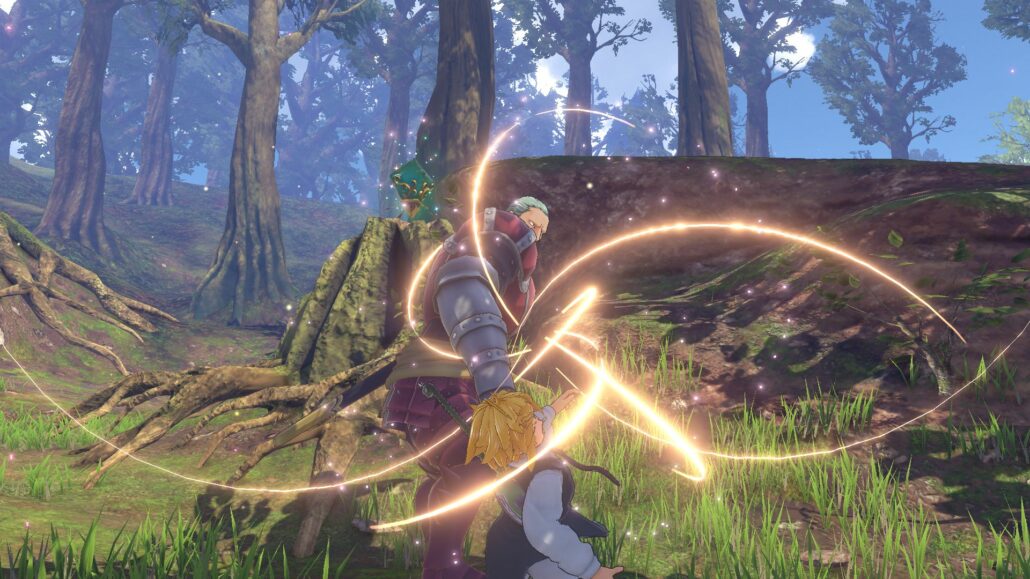 Let’s assume you are exactly who this game is aimed at, and you’ve watched The Seven Deadly Sins (which may be known as Nanatsu no Taizai among weebs) and you’re a fan. Let’s even say you’re currently watching (or anticipating the Netflix release of) the second season. What does Knights of Britannia offer you, the dedicated fan? Well, that’s where it gets awkward. As many anime games before it have done, Knights of Britannia’s story mode is basically a straight retelling of the first season’s story with few alterations.

There are new side quests and unique bits of dialogue, but for the most part everything is taken straight from the show, jokes included. As someone who got into the series late last year, it’s a bit of a letdown. What is here for fans though are small visual gags, I suppose. Elizabeth, the dainty lady of the group, will be cleaning in their roaming pub, The Boar Hat, and Meliodas, our young protagonist, will be looking at her bum. A classic gag from the anime, only this time, it’s the background to a menu screen. Other character interactions replace this one as time goes on but the fact that I’m talking about the background to a menu is all you really need to know. Sometimes at the end of a mission, your results screen will include the giant Diane bending over and peering into one of the Boar Hat’s windows, arching her rear high into the air - and the definition on her buttocks in this scene leads me to believe it was no accident. Personally, this isn’t one of the reasons I enjoy Seven Deadly Sins, and the characters of Knights of Britannia aren’t interacting enough or doing enough to remain interesting. 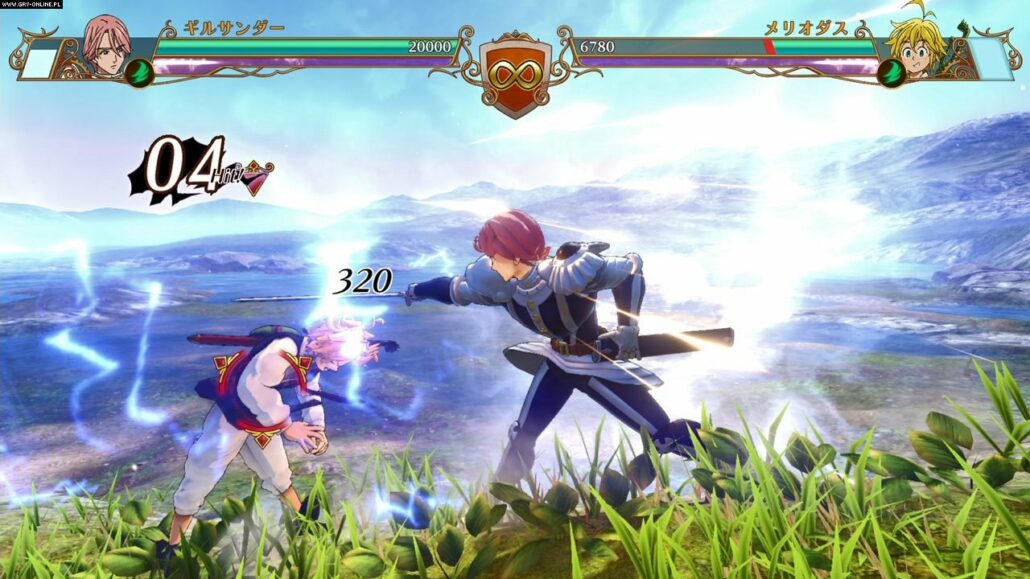 And sadly, shockingly, that lack of interest carries through to the battle system. Each battle in Knights of Britannia takes place in an invisibly walled off arena with a few houses inside that are destructible - the environments shattering as you do battle is pretty satisfying, honestly, even if it doesn’t always feel like it’s because of your actions. Many battles will be against simple groups of scrub enemies that take a few hits, or even a single projectile, to finish. Other battles will be a bit closer to bosses, often 1v1 (though sometimes 2v2) with large health bars that’ll take a bit more time to whittle away at. In these scenarios, you’re also much more likely to get hit yourself which isn’t so much of a concern when against smaller enemies.

You attack with Square, Triangle and Circle buttons, with S and T being attack buttons and C being a projectile. You can combo S and T together before following up with a C projectile as enemies get thrown back, and you can access magic attacks by holding down R1 and then pressing one of the attack buttons. To make things exciting you can dash about arenas by double tapping the Cross button, which shoots you towards your opponent before you deal out the damage. In the more exciting matches you’ll be flying around arenas chasing down foes, but it’s all a bit floaty and weak feeling. Combos aren’t satisfying, they’re just a result of button mashing, with the closest thing to a complex combo being a few light hits being canceled into your character’s super move, which is activated by pressing both L2 and R2.

But there are missions without combat! Yes, you can play as Elizabeth where you… walk around arenas and collect shiny items on the floor. Yep. Also, there might be enemies, but Elizabeth can’t get hit once, so… Don’t get hit. Usually you’ll have Hawk the pig with you to ward off foes, but it’s still nothing but tedious busywork. 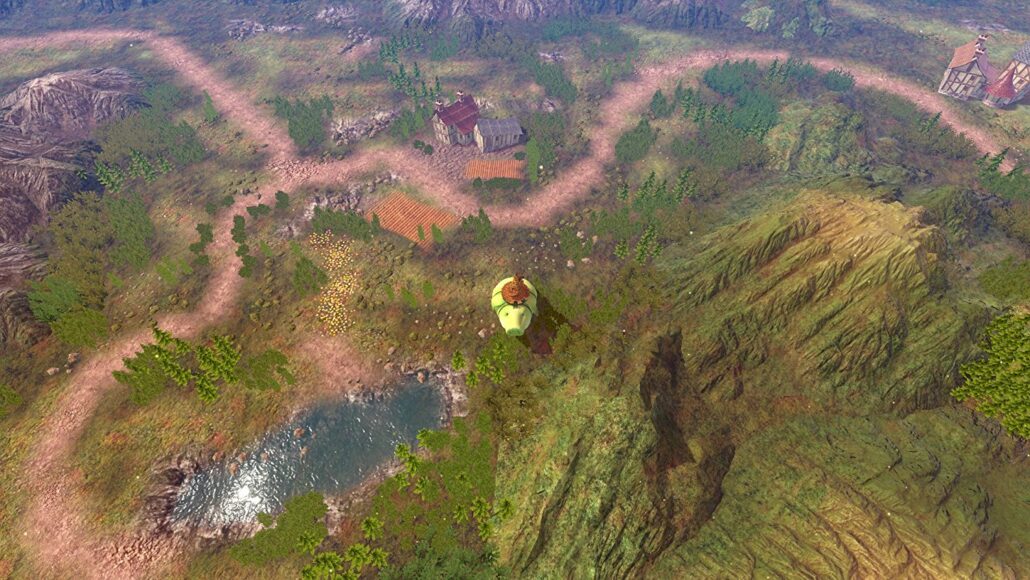 It’s a massive shame that the most excited I was by Knights of Britannia was seeing the overworld. In the overworld you take a top-down view of town and settlements and walk about as The Boar Hat - or, the giant boar that wears the pub as it’s hat. The overworld looks detailed and walking about it leaves satisfying dust clouds in the boar’s wake. It’s cute and looks really good, but sadly everything else in the game doesn’t really hold up. Characters models look fine, but intros and victory poses at the beginning and end of battle could be far more expressive. They should be. Even in story sequences, to say that characters are under animated is an understatement. In one scene, Melodias shouts about saving Elizabeth, and his mouth is just agape. Just, agape. The lips quivered a bit as he spoke, but his mouth never closed. It looked hilarious, and sad, but just not good in any way.

Unfortunately The Seven Deadly Sins: Knights of Britannia just doesn’t do justice to the series at all. There are a few hours of fun to be had here, certainly, but even dedicated fans will find that it doesn’t last long enough. Repetitive battles and shallow combat just don’t keep things interesting for long enough, even if there are several characters to use. Add a point to the score if you're a fan, remove one if you don't know what SDS is.