If Sennheiser is known for anything, it's that you're going to get a good quality headset offering audio quality that's up there with the best you could ever hope to have. With this quality of build and audio, you're often paying for that quality too. From our previously reviewed GSP 670 to the extravagant sequel to Orpheus, the £51,000 HE1. Fortunately, the newly released Sennheiser GSP 370 is a little more affordable than the HE1.

How much exactly is the GSP 370? As I mentioned during the announcement of the new gaming headset, this comes in at an RRP of £169/€199/$199. This makes the Sennheiser GSP 370 one of their more affordable headsets. When you look at the headset, its price and core features, you're getting a lot of value for money.

Lightweight but sturdy is the best way to describe the Sennheiser GSP 370. Weighing in at 285 grams, there's a lot less weight for the headband to carry. Now, while the headband has less to support, there's less padding when compared to the GSP 670. Fortunately, the slimline band fits well on the head, never feeling like it's pressing on you or compressing around your ears.

That's one of the best parts of the earcups. I was quite concerned when first putting the cups on, again due to the fact that there is less padding there. Half a centimetre less than that of the GSP 670 premium headset. The fact that it's made of memory foam helps to keep comfort over prolonged periods of time and over multiple long sessions.

Now, I do have one concern. That's a simple one, the thing is made purely of plastic. The headband is thick plastic, the earcups are plastic, the microphone and all of the levers and dials. The concern is both on the aesthetic quality of the headset but also the durability. Fortunately, these concerns have proven to be unfounded and well over two hundred hours of use - including falling asleep multiple times wearing the headset - has been a very comfortable time with no ramifications to the headset.

What should be surprising to anybody is that this lightweight headset also contains a battery that delivers in spades. The original announcement of a gaming headset capable of delivering one hundred hours of clear, quality audio. Normally a headset that's said to give a certain number of hours of wireless time, those figures are in conditions that are too perfect compared to real-world use. Here, the figure of one hundred hours is so close to being during regular use that even in the most intense of gaming weeks, you've got a headset that will last all week.

All of this is supported by a simple USB wireless dongle with an exceptional range and low latency connection. You say it or it gets said to you, it's instantaneous. When I say range, I mean the distance it reaches. This is the only headset I've ever used that has managed to keep a connection in every square inch of my house, walls be damned.

Can you Hear me, Major Tom?

Sennheiser is pretty well known by now for delivering when it comes to audio quality. Despite this not being from the company's premium range, the Sennheiser GSP 370 doesn't fail to impress, at least in the expectations you can have for one of their more budget options. The design of the headset means you'll never need to raise the volume over fifty per cent. The earcups don't cut out a huge amount of background noise but do enough that you'll never find yourself struggling to hear what's being played to you. Combined with a decent volume setting, the rest of the world just disappears.

Granted, you're not going to find yourself with audiophile levels with the headset, but there's still a lot to praise here. Combined with the Sennheiser Audio Suite, you'll find a range of settings and adjustments you can make to find a great level for whatever game, music or show you're listening to. One thing that needs to be said is that the Sennheiser GSP 370 has a decent level of clarity, with a headset that can deliver the highs and lows you'll find throughout. Granted, there are moments where some elements can get lost in the mix. The inevitable question of "does it sound good?" has a simple answer: Yes, it sounds great.

One area which doesn't seem to be any lower than that of Sennheiser's premium range is the microphone, which offers a great level of clarity and blocks out a decent level of background noise. While it is permanently attached to the headset, it's both surprisingly bulky and flexible and activatable only when you lower the microphone to head level, raising it keeps it tucked against the headset.

The Sennheiser GSP 370 - The New Headset to Beat?

Will the Sennheiser GSP 370 replace the GSP 670? Well, it's a lot closer than the price difference between the units should ever allow. Were it not for the build quality of the 670, I would say yes. The GSP 370 has a battery life that is quite literally second to none. I've never encountered nor am I aware of a headset that has a battery life as long as this, particularly with the audio quality that comes with this battery life.

As stated at the start of this piece, the Sennheiser GSP 370 is coming in at what is a reasonable price tag of £169/€199/$199. While it's not exactly as affordable as other headsets, with others you aren't getting the same quality in build, sound and most certainly not the same battery life. Hell, one thing I haven't even touched on is that the wireless strength here also beats that of any other headset I've ever worn. I normally find that others lose connection directly at the bottom of my stairs, where walls start causing issues. (my PC is upstairs). I've yet to completely lose connection with this.

Do I recommend the Sennheiser GSP 370? Yes, I do. It's as simple as that. If you want to spend a little more money, getting that extra build quality and comfort, you'll be going for the GSP 670. Otherwise, I have no hesitation in proclaiming that this is, after considering all factors, the king of wireless gaming headsets. 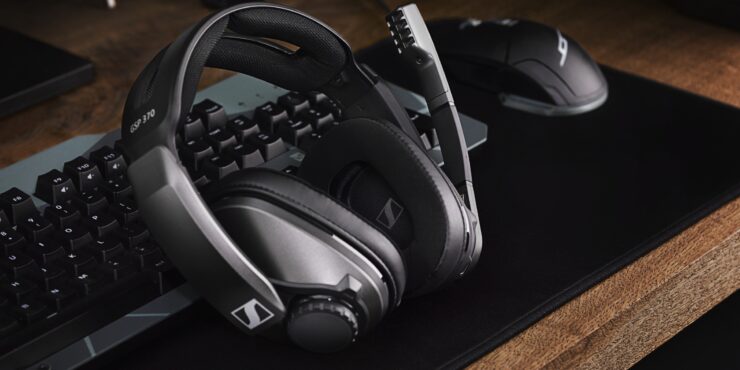 With an exceptional 100-hour battery life on what can look like a cheap, but is a deceptively sturdy and strong headset, this is already something to keep an eye on. Audio quality, while not on the same level as their more premium outings, is still of a great level and offers the quality one could expect from a Sennheiser outing. All in all, Sennheiser have made what could very easily be considered the king of wireless headsets in the Sennheiser GSP 370.