2 in 1 is something that tablets have recently been striving for, with the best on the market being Microsoft with the Surface and Apple attempting it with the iPad Pro. Of course, the tablet also wants to act as a lovely but slightly bulky portable media device for you to enjoy everything you can. Samsung, with the Galaxy Tab S4, is looking to take on this challenge and make the first true Android 2 in 1 high-end tablet.

The thing about looking at the Galaxy Tab S4 is judging it both as a high-end tablet as well as the 2 in 1 functions. Also, looking at the competition. There's little doubt that Apple are the market leaders for tablets and Microsoft have the best 2 in 1 device on the market. I have my reservations on the latter aim, but if anybody is likely to topple Apple on high-end Tablets, it's Samsung. This is exactly what they're aiming for with the Galaxy Tab S4.

The Beauty in Front of the Beast

Tablets will never be the most attractive things out there, no matter the model. Why? Well, they're the phone's larger relative. The mobile phone is Cinderella, the tablet is one of the sisters. That doesn't mean that Samsung, and other companies, aren't going to do their best at making them the best damn looking ugly-duckling they can.

In the case of the Galaxy Tab S4, Samsung has done a fantastic job and making it look good. Just how functional and safe this is, well that's something to be left down to the user. In particular, I have huge fears of a recreation of my Samsung Galaxy S7 where, following an accident where somebody bumped into me and knocked the phone out of my hand, the glass on the rear was completely shattered. The Galaxy Tab S4 also has a full glass back. It looks fantastic but it's fragile.

This is particularly a concern as, with all tablets, you require both hands to keep a firm hold on it. The glass back also comes with the other negative aspect of glass - it's not the most textured of materials, it's slippy and on a more aesthetic value - smudges are so clearly visible on it. I've found myself wiping the back of the tablet more than the front. Of course, that's a minor concern, with the larger one being the fragility of glass. I found myself utterly terrified of it being broke on a recent holiday I took to Dubrovnik, where I wanted to test it on the road.

This is a test that the tab passed with flying colours. At least a test in how easy it was to see. The Galaxy Tab S4 is beautifully sleek with even smaller edges (bezels) than the Tab S3 - allowing the display to be increased from a 9.7 inch, 2048x1536 display, to a stunning 10.5 inch, 2560x1600 AMOLED display. As a result of this display, the contrast between colours is fantastic. This means playing any game, watching any video or even just generally using it is a charm.

Smooth and Simple: The Way it Should Be

The Galaxy Tab S4 has, arguably, the best display of any tablet on the market. While the resolution is lower than that of the iPad Pro range, it has a superior pixel per inch count of 286. The fidelity of the S4 shows no matter the conditions, be it on a plane, under the glaring sun or in a dark room, it consistently looks fantastic. The only downside I found is that the touch screen is a little too sensitive - a problem I never knew I'd encounter. Even the slightest touch from bed covers, clothing or a headset wire will interfere with video playback or more.

A minor issue really, compared to the good. Also, yes, you heard right - it has a headphone jack on top of the four speakers that offer fantastic audio quality. Another great thing for the tablet is that it lasts a long time. Coming with a 7300mAh battery, it is far superior to the S3. Charging is just as quick as you would also expect. Fast charging is able to fully charge the tablet in around three and a half hours, giving you a full day of usage. Of course, another huge boost is that Samsung includes this with the tablet rather than charging extra. Another major boost over the Cupertino-based rival.

Unfortunately, I haven't been given the chance to use the tablet with the keyboard - which can be bought separately. What the tablet does come with, though, is the base range of the S Pen. Using it is also particularly easy and also ties into the portability of the tablet. It's light, light enough for you to hold in one hand and make notes with your other hand, using the S Pen.

Using the S Pen to write is also incredibly smooth and easy. You can keep everything handwritten or have the tablet translate your writing into text - incredibly useful if, say, you're writing a review. You'll be able to see my handwriting in the screenshot below, but just for clarity, I'll also type it all down.

Writing notes for the review of the Samsung Galaxy Tab S4 using the tab itself, using the S Pen, is surprisingly easy and effective. Indeed, my writing here is actually neater and cleaner than my regular handwriting. The accuracy is fantastic, it's easy to fix any mistakes and it also has multiple settings as well as a huge range of colour options. Another great feature with the pen is the ability to use it artistically, letting you draw freestyle, colour in other people's artwork and more. I'm as far from an artist as you could imagine - struggling with stick figures - but I still found myself enjoying my time with it. 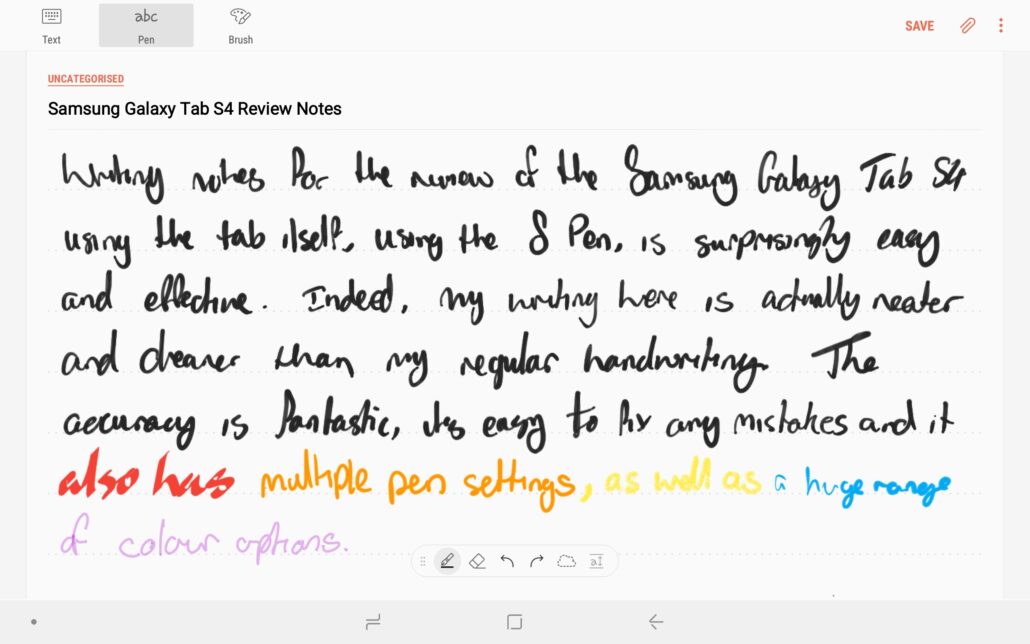 Again, this isn't completely without issue. The screen sensitivity does make it difficult at times, with your hand or a loose piece of clothing sometimes acting as the input rather than the pen. It's more than a little irritating when you're writing something out for it to flip out and ignore you. Not a tab-breaking issue, of course, neither is the fact that it's incredibly irritating when I catch the button on the S Pen, which opens up the menu - again, interrupting my writing. In addition to this, the translation from pen to text isn't perfect, though that may be as a result of my handwriting.

Moving away from the S Pen, we have the cameras. The Galaxy Tab S4 comes with a rear 13MP Camera which records in 4K. As good as the rear camera is, taking pictures with a tablet is as unwieldy as it has always been. The front 8MP camera records in 1080p. It makes it perfectly fine for skype or other video calls and also acts as a facial or iris login scanner.

Just from looking at the benchmarking and specifications alone, you can see that the Galaxy Tab S4 has a lot behind the screen. Albeit, not everything behind the screen is completely modern. For example, you'll see that the Galaxy Tab S4 is using the Qualcomm Snapdragon 835 from last year, rather than this year's 845/850. Sadly, no Android device is yet to use higher than the 835.

Despite it using last years SoC, the Tab S4 runs everything as quick and effective as you would expect it to. In particular, this applies to games. The only game I've found that puts the S4 through its paces is Fortnite, which runs smoothly, but not at maximum settings. I have yet to find another game available on Android that can test the tablet, though I honestly don't find myself playing many mobile titles.

With the base range offering 64GB of Storage, you may have enough there for the average user. You can also buy a Tab with 256 of onboard storage or simply pop in a MicroSD card. It can support up to 400GB if you go the MicroSD route. This is a huge positive point for Samsung, helping to make it stand apart from the Apple-based competition.

It's just a shame about the limited RAM. With 4GB, it's still lagging behind what it could have. It can certainly handle any tablet style tasks you want to throw at it, but there are concerns when you throw some serious multi-tasking its way. In particular, it could really chug if you wanted to truly use Dex to its true capabilities.

Dex is actually one of the features that could propel the Galaxy Tab S4 beyond any competition. Could is the operative word. Dex is a platform that allows you to transform your tablet into a mobile desktop - at least in theory. Practically, I've found it simply isn't worth the hassle of using it on the Galaxy Tab S4.

Partly this is because you desperately need to use a Bluetooth mouse & keyboard for it to be remotely useful, or at the very least the keyboard you can buy to go with the tablet. Without that, you'll find using Dex with the S Pen to be a chore at best, unwieldy and a literal pain in the arse to use. This is made easier if you connect the tablet to a large screen and use it as your input device

The desktop view is easy to navigate but it's where Dex, and the hardware limitations, start to show. Opening multiple tabs, trying to run even a decent amount at once will see it start to chug. Worst of all are the bugs, with quite a few apps closing on me. Dex is certainly a fantastic tool for basic functions like emails, writing up notes (maybe even a review), but only if you have the tools for the job. For now, I'd say stick to a laptop or if you want a tablet, the Surface.

The Samsung Galaxy Tab S4 is a clear upgrade on the Galaxy Tab S3, with a fantastic 10.5-inch screen and the inclusion of the S Pen. Of course, this doesn't mean it's perfect. The hardware limitations hold it back somewhat and hamstring Dex, though not as bad as it could have.

As of now, the S4 is the pinnacle of Android tablets and a strong competitor to the iPad 10.5 Pro. This is particularly true when you consider the RRP of £599 for the Wi-Fi version or £649 for the 4G version, compared to Apple's £619 Wi-Fi or £749 Wi-Fi & 4G. This doesn't make it cheap, though, indeed, like most high-end tablets, it's expensive. Still, despite anything, it's by far the best tablet on the market for media consumption but, like all tablets, has a bit to go until it can replace a laptop. 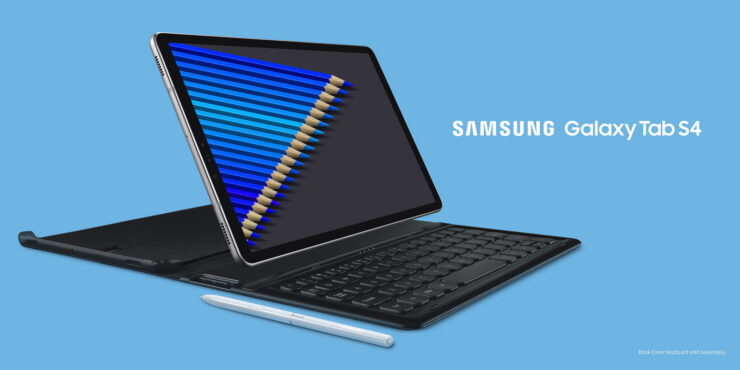 The Samsung Galaxy Tab S4 is the pinnacle of Android-based tablets at the moment, with a fantastic battery life and a good amount of power behind arguably the best display on the market. However, it could have better hardware, as this limits just how useful some features, such as Dex, are. Also, while it looks fantastic, it feels fragile as a result of the glass covered rear. All things considered, it is a great tablet for media consumption though not as great as it wants to be as a replacement for a laptop, not that any tablet is.