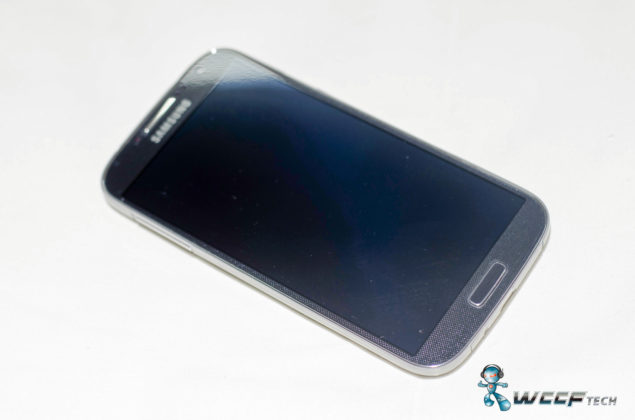 With Samsung reveling in the success  of the best seller smartphone on the planet without any doubt, the Samsung’s Galaxy S3, it was time, to give a refresh to their flagship phone, a bump up in terms of hardware, ease of use, looks and speed. And so appeared the Galaxy S4.

A little history on Android

Since over almost 5 years now, Apple and Google have been raging war among one another in the pursuit to deliver the top Operating System to the market. But while Google has managed to plug the issues, the lags, the little bugs, Apple has started showing signs of ageing. Is it because they don't have any more warheads in their arsenal to pull of, is it the absence of the god of design Steve Jobs, is it simply a wait while the consumer continues to buy poor hardware and aged software at premium, we don't know. But the unexpected bit is Apple copying features off Android; be it multi tasking, or just the plain pull down notifications bar, its a simple scheme of copy + paste. Google, on the other hand, has managed to up the edge with loads of design and feature innovations, and bug fixes thanks to the Open Source community working to its benefit.

Samsung has done what no other company dared to do, or lets say, couldn't manage to do well. It built a skin over the stock Android interface, and over the couple of years since the Galaxy S, improve it in terms of features, fluidity, usability and design. The latest smartphone from Samsung features Touchwiz (Samsung's custom UI) that unlike the previous iterations, is extremely functional and smooth. With an Android 4.2.2 base, it is the first non Nexus commercial device to come with the latest version of Android pre-loaded.

The Korean Company has released the Galaxy S4 with an industry first Octa-core processor, top of the line specifications, and maintained the USPs of the Galaxy top range - AMOLED screen, high power battery, expandable memory, the two soft keys one hard key layout. The specifications below should give you a small preview of what comes in the flagship package.

I’ll be fairly straight here. Dimensions wise, the Galaxy S4 looks and feels almost identical when held in hand in comparison with the Galaxy S3 and weighs nearly the same (133g vs 130g). Samsung has however managed to bump up the screen size from 4.8 to 5 inches.

The design is however a totally different story. While Sony released its flagship sandwiched between two toughened glasses, iPhone 5 was already a benchmark in terms of smartphone build quality and the HTC One came in a beautiful aluminium unibody shell, the Galaxy S4, is well, simply a remodelled Galaxy S3. Its the same plastic body, with a full size Gorilla Glass protecting the screen and a plastic back cover housing the battery, SIM and the MicroSD slot. Yes, the gimmick of a diamond pattern on the back might give some premium look to the Black Frost model, its tough to differentiate it from the predecessors in a glance.

Tech freaks like me would contend that its the hardware that matters, and it really doesn't disappoint on that front, but when you're pay almost $800 for a phone, you expect it to look worth its price. And that, the Galaxy S4 sadly doesn't.

The button layout and overall design hasn't changed much with the exception of the camera flash now placed under the rear 13 megapixel camera and the speaker moved to the lower left corner of the phone. Some would contend that this might block sound, and the previous placement was better. I kind of agree. 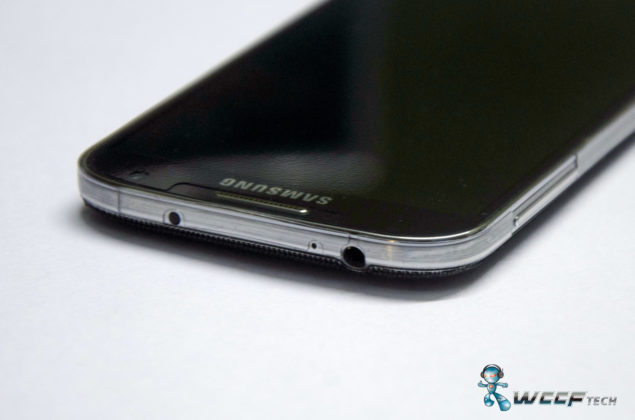 The front camera has been bumped up 2.0 megapixels and supports full HD 1080p video, giving you the benefit of better quality video chats and self portraits. The front also houses the various sensors, including infrared sensors for gestures, the proximity sensor and the notification LED that came with the S3..

And more importantly, they didn’t seem to correct one design flaw from the S3 for which we call light leakage. Whenever the lower Menu and Back capacitive buttons tend to illuminate, the light spreads beyond the button’s symbols that makes one feel the build to be cheap from an aesthetic angle which is only a small downside but can affect the overall perception of the user.

Equipped with the Gorilla Glass 3 upfront, one can be at ease of the phone not to suffer the usual dings or scratches on the screen that may be caused by keys or the usual coins or other pointed objects. However, like most screens in the market, it isn't scratch proof so it still might pick up scratches from deep impacts, sand, falls.

Tthe 5 inch Super AMOLED capacitive multi touch screen supports the usual 10 touches thats been standard since the Galaxy S days. The density has been up'd to 441 PPI, second only to the HTC One, but the difference is barely noticeable by the common eye.

Now comes the interesting part. The phone has two new features; one that looks as if borrowed from Sony’s 2012 Xperia line and the other from Google Glasses.

The first noticeable thing is for you to move around on the screen without actually touching it up to a distance of 1.5 centimeters which is, believe me quite relaxing if you’re one of those people who still don’t trust your hands to damage the protective coating on the screen. Whenever you do so however, a small glow trail is shown on the screen, showing where your fingers are being tracked to.

The other thing is in simple words, eye scroll. Suppose you’re lying on your bed all cozy with one hand holding the phone and the other too lazy to lift up while reading a document on your phone. Well then, Samsung lets your eyes do the work. It takes a bit of getting used to at first but very much useful in the long run. The first builds are expected to have some bugs in the start as I had faced too when it went beyond my control at some points but never the less one of the best things Samsung has yet ever inducted into the Galaxy S4.

Considering which model you opt for out of 16/32/64 GB capacities, I doubt you’d ever run out of space as one can extend storage by adding a microSD card upto 64 GB and even if that’s too small for your precious storage then Dropbox will provide you with an additional 50 GB of storage.

Alright this might be a deal maker or a deal breaker since when you have so much stuff on a flagship store, you obviously need a big battery to make run for long. Yet, thanks to innovation over time, the octa-core chip actually saves more juice than drinking it up. The more the merrier is what we all what we want but this seems too good to be true. The S3 had an endurance time of over 60 hours on a single charge that equals to 3 days of battery time!

With the S4, the bar has been raised up by a few more hours at our end but that also might not be the case for many as more users will test the device out and set out a fine tuned threshold of how much the 2600 mAH battery can squeeze out.

Running on Google’s Android OS Jellybean 4.2.2, it is currently the latest and most up to date variant released. Coupled with Samsung’s Touch Wiz, it doesn’t seem to back as many new radical changes as one would expect but never the less, has shortcuts to enable things such as WiFi, GPS, restricting calls and even has the option present there to enable eye scroll gestures.

I would say this isn’t exactly the best update for this phone considering Google is going to release ‘Key Lime Pie’, the next and 5th generation of the ever evolving Android OS this May 15th.

Besides that, it does possess a few features that have been carried over from the Note 2 that inclides their ChatOn messenger and S Translator. There is a new tool they just brought out that works on NFC or Bluetooth called Group Play.

With Group Play, all S4 owners can share music, photos, documents, files and even go multiplayer with one another. As for music; add a couple of S4’s along and you got yourself a surround sound setup right there!

Considering the barometer, thermometer and other new sensors they added in the new S4, they also have released S Health which is basically a calorie counter/pedometer that depending on the sensors, notes down your steps, jogs, snacks and even perspiration.

This is probably my most favorite part of this whole review. Being a full time photographer / cinematographer myself, I tested out both 13 and 2 mp cameras (both shoot 1080p HD) on the back and front respectively. Now Samsung has brought up a feature to the mobile world that has been long in the imagery industry; taking stills and videos at the same time. They prefer to call this technology Dual Shot since.. well its easy to remember.

This works both on front and rear cameras and additionally they have also bundled two more new features which are Sound Shot and Drama Shot.

On sound shot, you can take a still and record audio in the back. The Drama Shot on the other hand, is more of burst shot mode in disguise. It can take 100 shots in 4 seconds equaling 25 frames per second. Not bad eh? But considering the high speed frame rate, you can expect the resolution to crank down considerably. Never the less, you can make up a good moving collage in one frame this way.

Now considering the aperture or f-stop is around 2.8 on this sensor, you wouldn’t expect to get DSLR like images with this phone. But then again Samsung has another trick up its sleeves. Calling it eraser, you take 5 successive shots and it will blur out unwanted objects in the background of your image, saving you precious time to do something productive instead of wasting a few minutes editing the image out in Photoshop.

All these 3 features would be nice to have on older generation phones but I doubt that will ever happen considering the Koreans to adapt a strategy used by Apple for a long time such as the instance having video recording support out of the box for the iPhone 3GS and no software update for its 3G predecessor.

Here are a few images to showcase the camera quality of the S4 and for once i must say, they have improved it's ISO performance or in simpler words, better pictures in low lit areas.

Having read my in depth review on the latest monstrosity by Samsung, you should now know the Galaxy S4 in the end is basically a revision of the S3 with more refined looks, build, and 3 grams heavier. However, it’s plastic build might be a cause for concern for those coming from the HTC family and might incline them for the newly launched HTC One, having a more solid build and display with an amazing contrast. But then again, eye/air scrolling, 1080p output on both cameras, and an 8 core processor is something to brag about.