Samsung, a well-known brand that doesn’t need any introduction when it comes to electronics ranging from house hold appliances to alluring and tantalizing gadgets. The maker of many renowned smartphones such as the Galaxy SII and Omnia, Samsung has also blistered its mid-range phone line with innovative and altruistic cell phones captivating folks from all walks of life.

Samsung holds a major share of Android smartphones available in a broad price range. Holding a powerful marketing strategy Samsung not only addresses geeks and tech lovers with high end smartphones but also looks after the young generation, which are often looking for fairly priced phones. Samsung Galaxy Young or more commonly known as Samsung Galaxy Y is the young counterpart of the majestic Galaxy SII that has specifically being designed to target the youth. A cheap android phone full of exciting features; isn’t that what you want?

Galaxy Y comes in a compact white box reflecting the phone’s specifications and inlay on the exterior. Once you open the box you are dazzled by the unique look of the handset which is safely rested in a plastic depression. Continuing your journey to the bottom of the box, you find the Galaxy Y manual, warranty card and last of all he exciting part-accessories.

The phone comes with a delicate Samsung travel charger with a fixed micro-USB connector at the end. To satisfy your PC need Samsung has packaged a micro-USB cable separately which allows you to connect your mobile to the PC via the micro-USB port. Furthermore, there is a hands free kit with good quality headphones and a standard 1200mAh battery about which we will talk in detail later. Samsung extends its courtesy over the customers by providing a 2GB micro SD card, which is included in the package.

Before proceeding, let’s take a look at the specifications of Galaxy Young GT-S5360

Too curious to know what the phone exactly looks like? How does it feel to hold one? Well let’s take an in depth look over the design of this one.

The front side of the phone has a silver coated handset speaker at the top with proximity sensors. Beneath it Samsung is engraved in a bold white font, just above the screen.

Below the Samsung logo rests the 3.0-inches TFT QVGA capacitive touch screen. It’s small but good. The touchscreen is responsive and there was hardly any occasion at which the screen didn’t response. It is multi touch capable and has a resolution of 240x320 which is quite low. The low resolution screen thus exhibits a poor image quality and the colors are not that sharp and bright as they normally would occur. Also it doesn’t offer a vast viewing angle. The image quality is low but quite frankly owing to the resolution of the screen it’s still good and is acceptable for such a low end phone. Obviously we can’t expect it to perform like HTC Wildfire or something can we?

Moving on, beneath the touch screen is the only physical button of the front which is the home button. Beside the home buttons are the capacitive touch buttons. To the right is the back button while to the left of the home button is the menu button. The capacitive buttons gladly were not over sensitive and responded very well for me at least. There wasn’t even a single occasion at which I ‘accidentally’ pressed any one of them. The edge of the front is chromed, adding to the decency of the phone.

The left side of the phone carries the silver volume up and down buttons along with a hole to accommodate your wrist strap. The bottom of the phone just carries the microphone and nothing else.

The top of the phone is the ‘utility compartment’ I must say. It holds a 3.5mm jack for external headphones or the hands free kit. The micro-USB port is located on the right, covered with a rubber sheath. The right side of the phone carries the power or sleep button which is used in order to turn on/off your device or go into sleep mode. 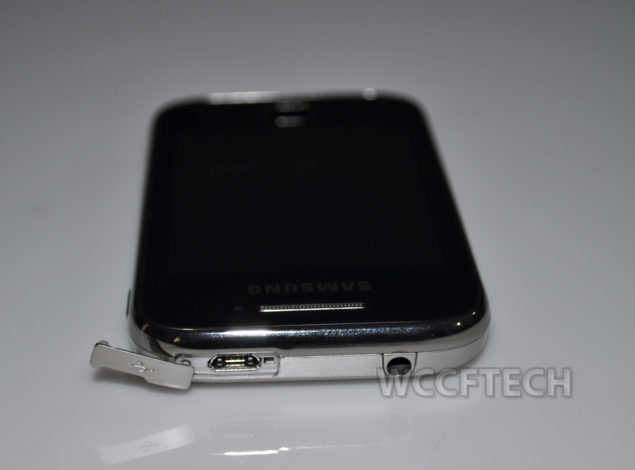 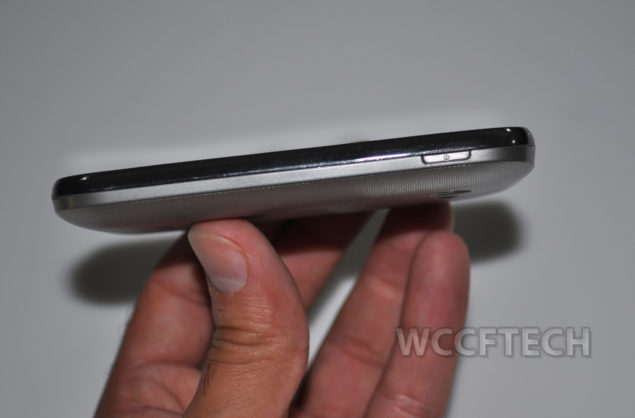 The backside of the phone is covered with a greyish silver plastic cover. Sounds nasty but it looks so delicate and artistic. The texture on the cover makes it smooth and gives a firm control to the user while handling it. 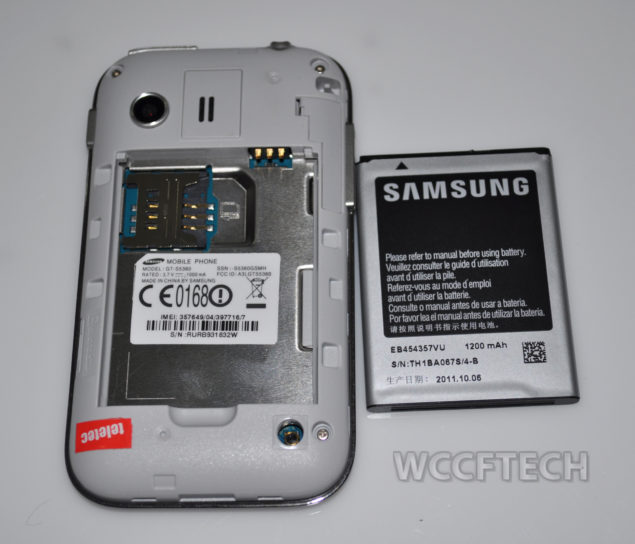 At the first look the phone looks like a miniature of Galaxy SII and why it shouldn’t, after all it is Galaxy Young. The phone is very light-only 97grams and 11.5mm thick. You can hold the phone firmly in one hand and gosh you believe it or not, it truly gives a smooth feeling when you hold it.

The phone came with the latest Android v2.3.5 Gingerbread. The processor clocked at 832MHz along with 290MB of RAM work like a charm except for sometimes when a lot of apps are running in the background or even when they are not the phone slows down a bit while unlocking which I did not like most of the time but after that it worked exceptionally well. 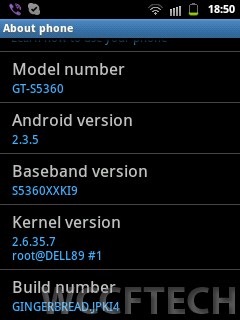 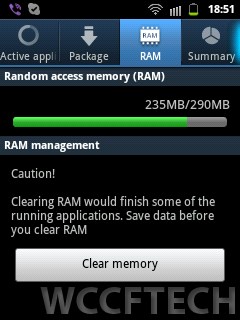 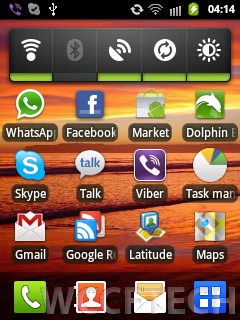 Moreover, it includes the muti-touch input method which is by far the best feature of this device. It includes both Samsung QWERTY keyboard and SWYPE input QWERTY keyboard. You can choose between the two from settings but using SWYPE was a joyful experience. Using SWYPE you can type a word easily by continuing to enter the letters of the word you want and stop when you’re done with the word and let the predictive text input do its job and give you the suggestions. The combination of SWYPE and predictive text is mind-blowing and accurate. 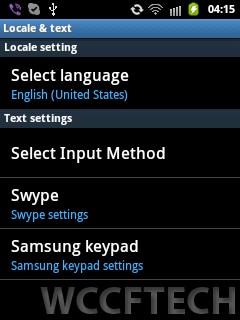 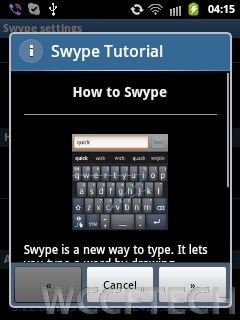 The phone also includes Google Smart features including Voice Search and Input, Youtube, Android Market, Gmail, Maps, Latitude, Places, Google Talk and Navigation. Social Hub, Samsung Apps and most importantly Quick Office are all part of the pre-installed apps, adding to the utility of this gadget. It includes built in GPS that keeps you on track whenever you are lost.

You can choose between three shooting modes: single shot, smile shot and panorama. There is a variety of scene modes to choose from e.g. landscape, night, party/indoor, sunset, dawn, fall color, candlelight and backlight. You can also choose the white balance. 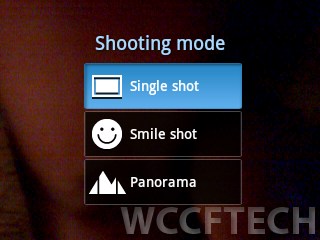 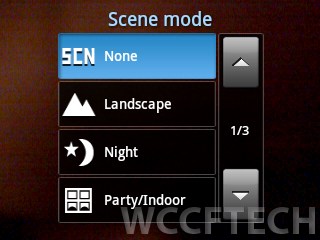 The music player is quite good. It’s simple but optimized for a low budget device. It includes both an equalizer and a 5.1channel enable option which can be used for a headphone. It works quite well on headphones but the sound quality on a hi-fi sound system was very poor. I tested it with Logitech’s Z5500 and the sound was really poor. On the other hand the sound quality on stock earphones (part of the package) was very good and the 5.1channel mode really worked well. 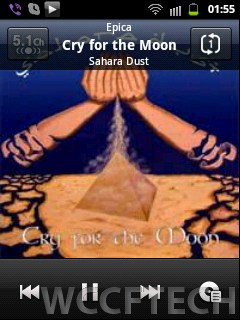 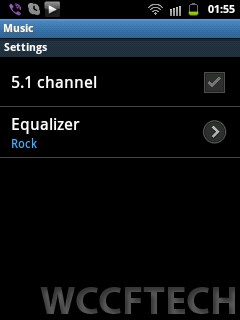 The mobile also includes FM radio for those who enjoy on the go live entertainment but the FM antenna is not built into the device and you have to use your earphones for that.

The speaker is located at the back and it’s the worst part of this mobile. The volume of the speaker is really low and you can barely hear your phone ringing even in a park, specially Skype and Viber ringtones. On GSM calls and messages its loudness is fair and I had no issues on loudspeaker as well.

A smartphone running Android Gingerbread with the applications and all the utilities and entertainment packed in a compact phone but the most important part of today’s smartphones-the battery, is a key factor that leads you to decide whether to get it or not.

A 1200mAh battery seems large enough but everyone knows the problem smartphones are facing these days and that’s battery issues. Whether it’s the iPhone 4S or HTC Sensation, battery woes are there. A good smartphone lasts about 6-7hours after constant usage but what about this little fellow?

Well in order to test the phone fully, I turned it off and charged it fully. I then turned it on and restored it to default settings. I then spent the whole day configuring my device. Downloading and installing apps, messaging, using Skype and Viber. The brightness was set to 75% and Wi-Fi and GPS were turned on as well. Bluetooth was however switched off.

I ran the mobile until the first “plug in charger” notification occurred and that was after a staggering 9hours and 38minutes as shown in the screenshot below. 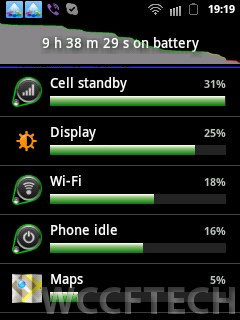 For a smartphone 9hours 38minutes is freaking awesome, considering my usage. The next day with maximum messaging and normal function the mobile battery lasted for almost 22hours which is pretty good.

I am personally completely satisfied with the battery life of this young fellow and found no issues with it at all.

Samsung has undoubtly targeted today’s youth with Galaxy Young. It is the best choice for young children looking for their first ever smartphone and Galaxy Young will be the best choice considering it’s cheap price tag of $150 only and an attractive operating system.

The pros of the device include the features it offers: Wi-Fi, GPS, Youtube, 7.2Mbps HSPDA+ connectivity, FM etc. The design of the phone is also perfect, with a sleek and stylish look and acceptable weight of 97grams and 11.5mm thickness. The capacitive touch buttons of back and menu at the front add to its beauty, which lacked in Galaxy Mini. The battery life, perhaps the most important of all is excellent considering its counterparts running Android.

The cons of the device include an under rated camera. 2MP is far below the expectations these days and in my opinion it should have been 3.2MP. Another problem is that of the volume of the speaker which is a bit low for notifications and calls.

If you are a starter and are looking for a really cheap handset then Galaxy Young is the best option among Samsung’s low end series and other handsets in the market such as Nokia X2 and C3. Considering its battery life and the exciting features it offers, you get a smartphone for almost nothing that can fulfill all your needs and it’s the best buy if you are about to start the journey of smartphones or switching to touchscreen phones. Galaxy Young will surely replace Samsung Star mobiles, winning the hearts of the young ones out there.