Rise of the Tomb Raider: 20 Year Celebration means that finally, PlayStation 4 players get to play Lara Croft's latest adventure, almost a full year after the original Xbox One launch and many months after the PC release.

Given that we already reviewed both versions of the game, we will focus specifically on the new content in this article. Two separate experiences offer players their own chance to explore the Croft Manor at their own pace. For those that recently purchased a PlayStation VR headset, Blood Ties brings another reason to put that virtual reality to use.

Blood Ties is the first bit of new story content added to Rise of the Tomb Raider. Taking place between the main story’s prologue in Syria and Lara’s first journey to Siberia, Lara receives a letter from her estranged uncle Atlas asking, rather demanding, Lara to relinquish her rights to the dilapidated Croft Manor. With no will in her father’s name and no proof of her late mother’s demise, there’s little on her side to stake her claim in the estate. As such, Lara decides to explore the Manor in hopes of discovering her departed father’s will.

Played purely through a first person perspective via PlayStation VR, this brief three-hour exploration section guides players through the Croft Manor and admiring trinkets and baubles from Lara’s storied past. For those who played a majority of Ms. Croft’s previous adventures, there’s a number of cute little winks and nods to Lara’s adventures beyond just her time spent in Yamatai.

The shift to first-person might feel unusual when compared to the rest of Rise of the Tomb Raider, but I for one enjoyed this change. During the nearly three hours of gameplay that took me roaming around the Croft Manor, I spent the entirety donning a PlayStation VR headset. With VR technology still in its infancy, trying to devise a proper movement mode still requires some work. Blood Ties offers two control modes to choose from: Free and Comfort.

Free Mode uses a control system that should feel familiar to anyone that’s played a shooter before. The analog stick is enough to move around with the player physically looking around the rundown environments. If you have ANY proclivity towards motion sickness, I highly advise against this mode. I’ve played through two different PSVR titles (the second being The Assembly) and the disconnect between moving around an environment while remaining seated is enough to give an immediate headache. With technology this new, it’s still going to be some time before either players catch up with the physical limitations or new advances in the tech help alleviate this abrupt motion sickness.

Comfort Mode, on the other hand, strips away the direct control and opts for a more teleport driven approach to navigating. This is the preferred method for a number of other VR-related experiences (including the forthcoming Final Fantasy XV demo with Prompto). It’s difficult to explain just why this movement works, although I remember an old piece from Eric Darnell likening the teleportation mechanic to ‘cuts’ between scenes in television and cinema, getting rid of any smooth transition. While teleporting adds some extra time to getting around the Manor, it’s an imperfect solution to an ongoing problem. Teleporting can be as simple as pulling in L2, pointing the DualShock 4 controller towards the intended location, and pressing R2. Sometimes navigating close to an interactive object takes a few jumps around to get to just the right spot to pick up an object.

Exploring the Croft Manor isn’t limited to just picking up and looking at objects. There’s an adventure theme that has players search for clues to unlock new areas of the Manor. Not every area will be accessible for a tourist trip upon first setting foot in Lara’s childhood home. Some areas are locked or may need the light of a flashlight to progress. Typically these extra tools will require searching about for artifacts and using Lara’s intellect to solve puzzles. A common theme is the use of number-coded safes with clues to the combinations scattered around childhood drawings or mementos from her late parents. Any time I’d pick up a new tool, I’d immediately backtrack and peer around looking for where best to put that to good use. By the time I hit the credits in the first piece of new content in Rise of the Tomb Raider, I gained a nice insight into Ms. Croft’s younger life and a fonder appreciation for the adventures she had undertaken over the past twenty years. 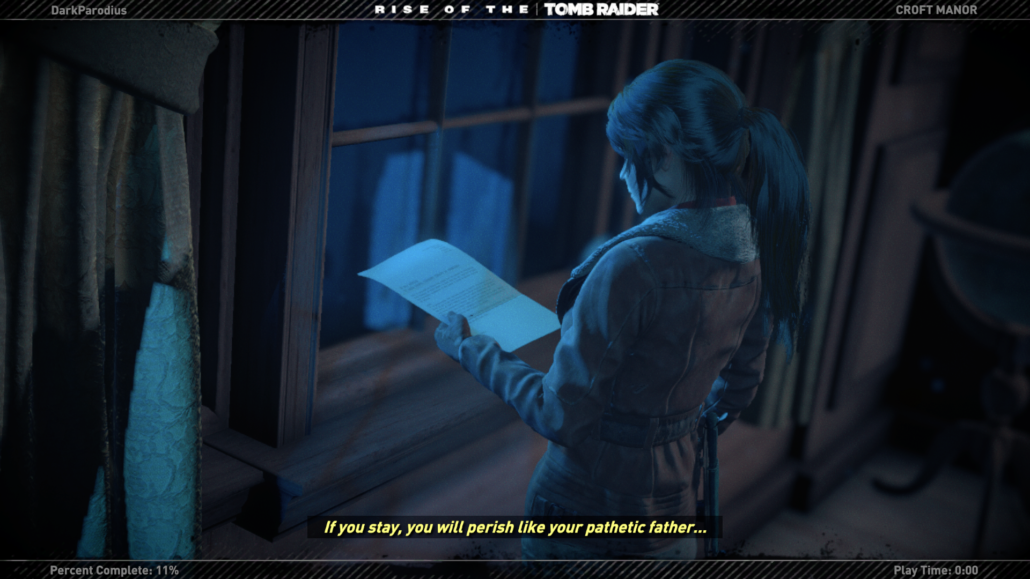 After memorizing the layout of Croft Manor, I then turned my sights to Lara’s Nightmare. Sadly, this second piece did not feature any VR-content but I didn’t see any need for it. Lara’s Nightmare compared closest to some of the Exhibition challenges in Rise of the Tomb Raider. In this fever dream, Lara’s Uncle has put a curse on the mansion that can only be laid to rest by destroying three ‘Skulls of Rage’. Perks are a welcome addition if you want an edge but the extra content can just as easily be completed without burning any challenge cards.

Zombies of all sorts litter the halls of the Croft Manor but usually only come in small numbers that a steady hand could easily take them out. For the sake of reviewing, I put Big Head Mode on just for a laugh and found myself taking just about any zombie out in a single headshot (and using melee takedowns on the ones that didn’t go down). I’m sure the next time I try out this content, I’ll aim for a more vanilla experience to keep things interesting. 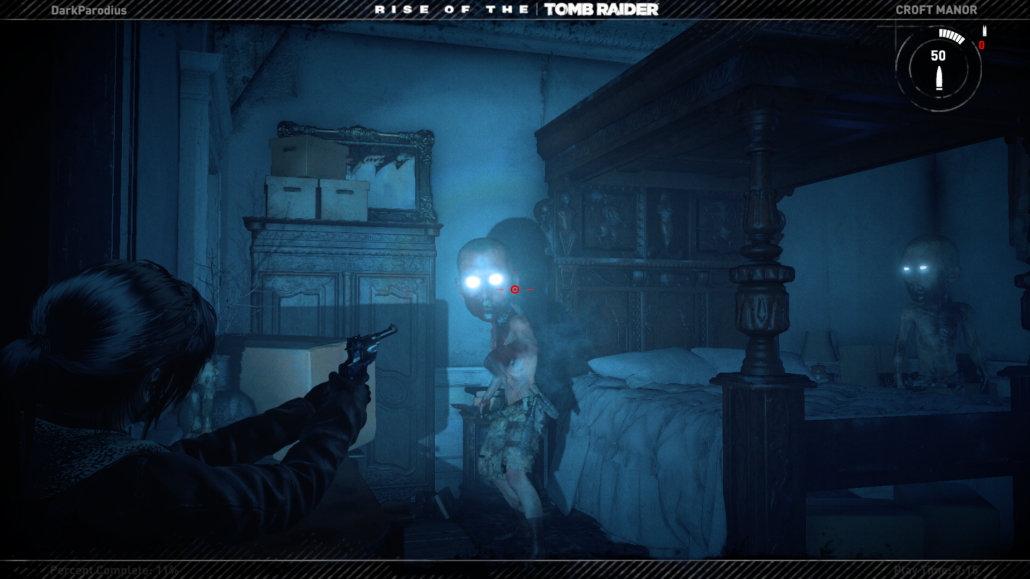 There’s a slight amount of randomization to Lara’s Nightmare, as accessing all of the rooms where the Skulls of Rage are located requires the use of a Master Key, whose location shifts about with each playthrough. Typically I’d find it down in the basement, near a fixture that offers an assault rifle or powered-up shotgun from time to time.

Once all three skulls are eliminated, a major boss fight takes place in the foyer of Croft Manor. A giant floating skull marks all that stands in Lara’s way, but it isn’t just as easy as blasting away at the skull with everything she’s got. Periodically throughout the encounter, waves of zombies (and later on, zombie dogs) will come after Lara that can easily take her down in just a few hits if she isn’t careful. This pseudo wave defense was an enjoyable climax, even if I did get taken down by those dogs on more than one occasion on a higher difficulty level. 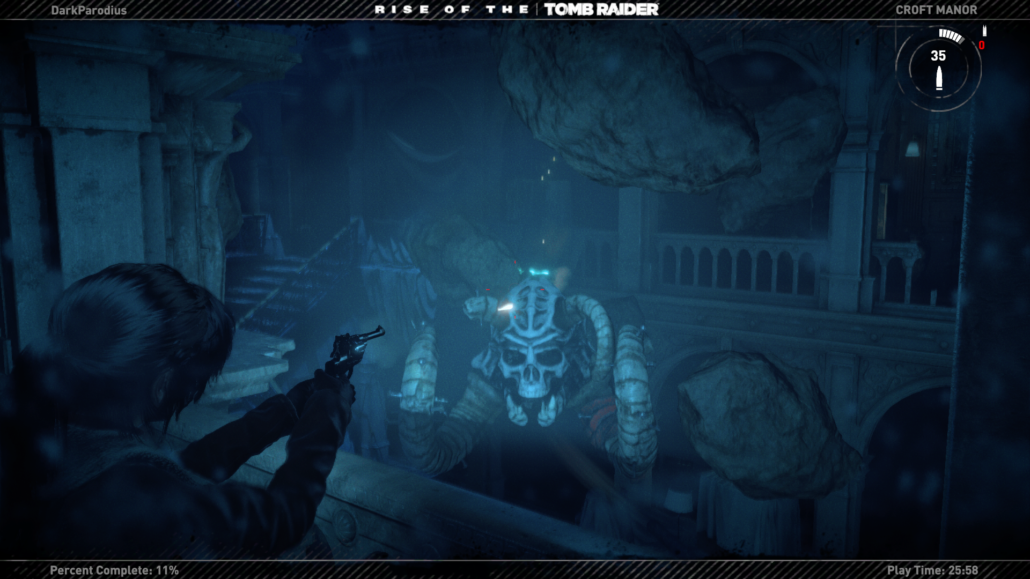 PC and Xbox One gamers can pick the Rise of the Tomb Raider: 20 Year Celebration Pack as DLC for $9.99.

PS4 version reviewed (code provided by the publisher). Also available on PC (Steam) and Xbox One.