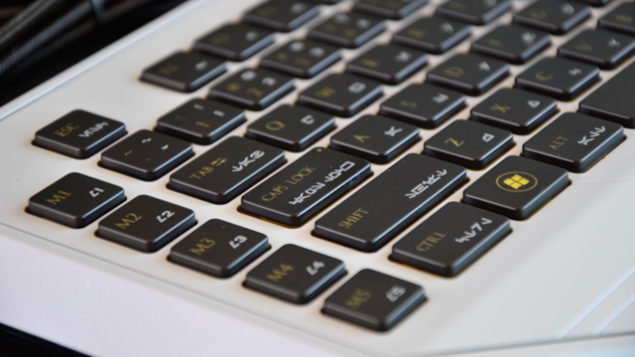 It has become a growing trend in the video game industry for game company and peripheral manufacturers to make games and hardware that complement each other so that the gamer can accessorize his gaming needs to his gaming personality. But this isn’t necessarily true for only movies because Razer did this with Tron when they made matching mouse and mouse pad for the movie buffs and they did it for Star Wars: The Old Republic, an MMORPG based in the Star Wars universe itself which dates back from the original movies. We got the opportunity to review the headset but the Keyboard is easily more pulchritudinous, so let’s see what is so special about the keyboard.

As I mentioned earlier the keyboard was made in collaboration between Bioware and Razer to help give fans of the game and / or the series that authentic Star Wars look when they are behind their gaming PC’s. Among the products was a mouse, a headset and of course a keyboard, All of which had their own unique features and setbacks. 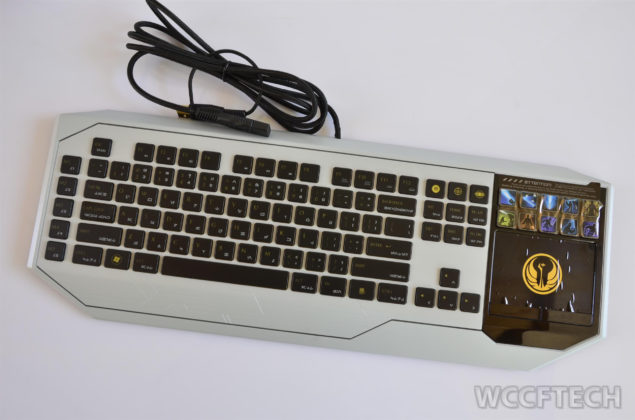 The Keyboard is of course the most gorgeous of all of the devices and it offers one of the most unique looks I have ever seen in a keyboard and whether or not you are using this keyboard for its original purpose of being a Star Wars: The Old Republic accessory or you want to use it as a conversation starter for when you have friends over this key board will definitely not let you down.

Let’s start with the design; the keyboard is an absolutely vision of beauty it has a thin strip of constantly changing LED’s around its border and the color keeps changing so that it’s never boring and shows some signs of life which is rare in a keyboard it shows off many different colors but my personal favorite was red, But the even better feature about the keyboard is the gold back lit keys, every key on the keyboard has a beautiful touch of gold back light behind every single key which is appropriate for Star Wars. While the Tron keyboard still has a better blue look you can’t help but feel a small sense of superiority over gold back lit keys when you want to show off your keyboard. 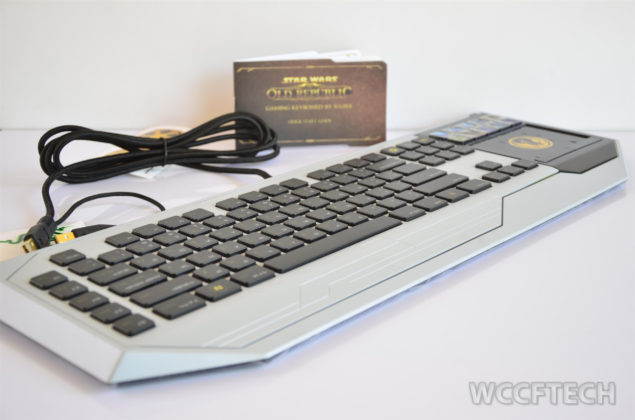 The keyboard has a build quality to match the price but the design looks a bit awkward considering how thick the keyboard is and how thin the front of it is, but otherwise the quality was superb and was well suited for the price.

What makes it even better is that every key has Aurebesh which was the most common written language in the Star Wars Universe, so now if you want to add Aurebesh to your Sci- Fi Vocabulary along with Klingon or other languages to impress people at sci-fi conventions or comic cons you have your own personal Aurebesh dictionary right at your finger tips.

The Keyboard has the unique feature of being able to recognize up to 10 key presses at once, if you are a class that has an array of instant cast spells than this keyboard will be a weapon of absolute chaos in your hands.
The keys have a good distance between them, similar to a MacBook Pro’s keyboard or in modern laptops where the keys have a small distance between them; the keys are also slim and don’t stick out of the keyboard like a sore thumb and give it that classy yet rich feeling which you get when you use a MacBook keyboard.

Not to mention they are soft and again feel great when you make contact with them with your fingertips. 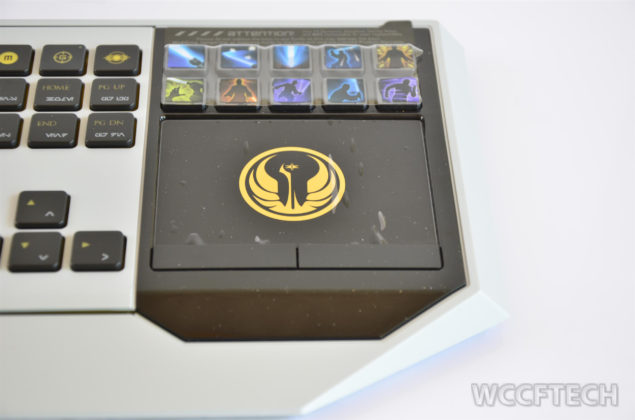 The keyboard also uses the switchblade interface which gives you spells and lets you assign macro keys on the fly so that you can have quicker access to what you need at a faster speed but along with the keys you also get the amazing multitouch pad which plays out as a mouse too, the logo on it can be changed depending on your allegiance to the Galactic Republic or the Sith Empire. The touch panel is versatile to where you can use it to navigate your game better or even for anything else, I can’t find the words to sum up how amazing this feature was for me at least so here is a video demonstrating its capabilities.

As you can see the keyboard is full of life and full of options. The only real downside to this marvelous beauty is its price, for $249.99 you can probably get a better keyboard but if you are a fan of the series and / or are a diehard MMORPG fanatic this keyboard is definitely worth your time and money.

So the point of a keyboard is to be played, no matter how shiny and beautiful this thing looks it will have to be used for its intended purpose of gaming. While aimed at MMORPG players it can of course fulfill the need of any and all kind of gamers and their games out there, be it FPS, RTS, TPS or any kind of gamer on the PC this keyboard will definitely meet your needs, while I am used to having distance between my W,A,S,D Keys some people might not and prefer the crowded WASD approach for games which they feel require it or can’t quite get their hands used to this kind of design, With a 1ms response time you can rest assured that your movies will register at the speed of lightning.

I got to use this keyboard with World of Warcraft and Star Wars: The Old Republic with the Switchblade UI had been quite useful to me in battlegrounds and certain end game dungeons for making some absolutely amazing macro combinations with the most ease.

While it took me a while to get used to the WASD distance in FPS games which I prefer more over other genres it was worth it because my fingers were more distant from each other and the keys also made typing messages easier and ensured I wrote messages without error or typos because of the distance between them and I don’t accidentally add an additional letter to my reply. 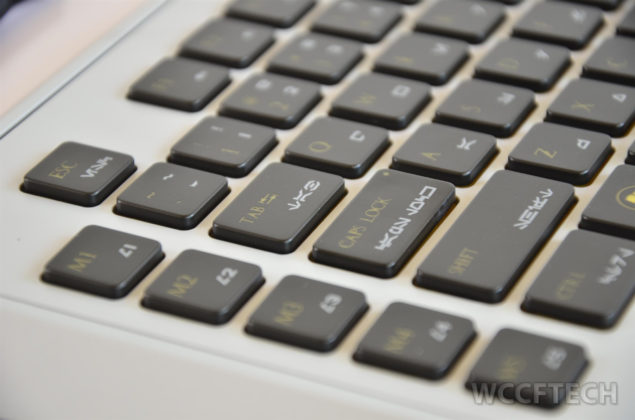 All in all I was very impressed with the keyboard and its quality especially the looks the keyboard delivered to a Star Wars fan. The keyboard is very versatile and it feels more alive than other keyboards because of all the features you have on this amazing peripheral, with the switchblade UI you can now do more than ever be it in game or desktop use. My biggest complaint with the keyboard would have to be it’s which is a little steep but considering this is Razer I see it being justified considered the name and recognition they have earned for themselves in the industry now.

Considering the switchblade UI, the changeable lights, gold back lit keys and the added bonus of Aurebesh lettering on each key (this is especially appealing to fans of the series) I am very happy with this keyboard.