In less than two years since bringing the original Huntsman Elite to market, Razer has introduced their next competitor to the optical switch battlefield. The fight for keyboard supremacy currently exists between mechanical and optical switches, each having its own strengths and weaknesses (and let's face it. You're not going to want a membrane keyboard when it comes to response times and multiple key presses). If you haven't had the chance, definitely have a look at Usman's review of the original Razer Huntsman Elite optomechanical keyboard to get a deeper look at the technology and what to expect from optical switches versus mechanical. This time around, we're taking a look at the Razer Huntsman V2 Analog, a new spin on the familiar design but with a new style of analog keyboard switches. 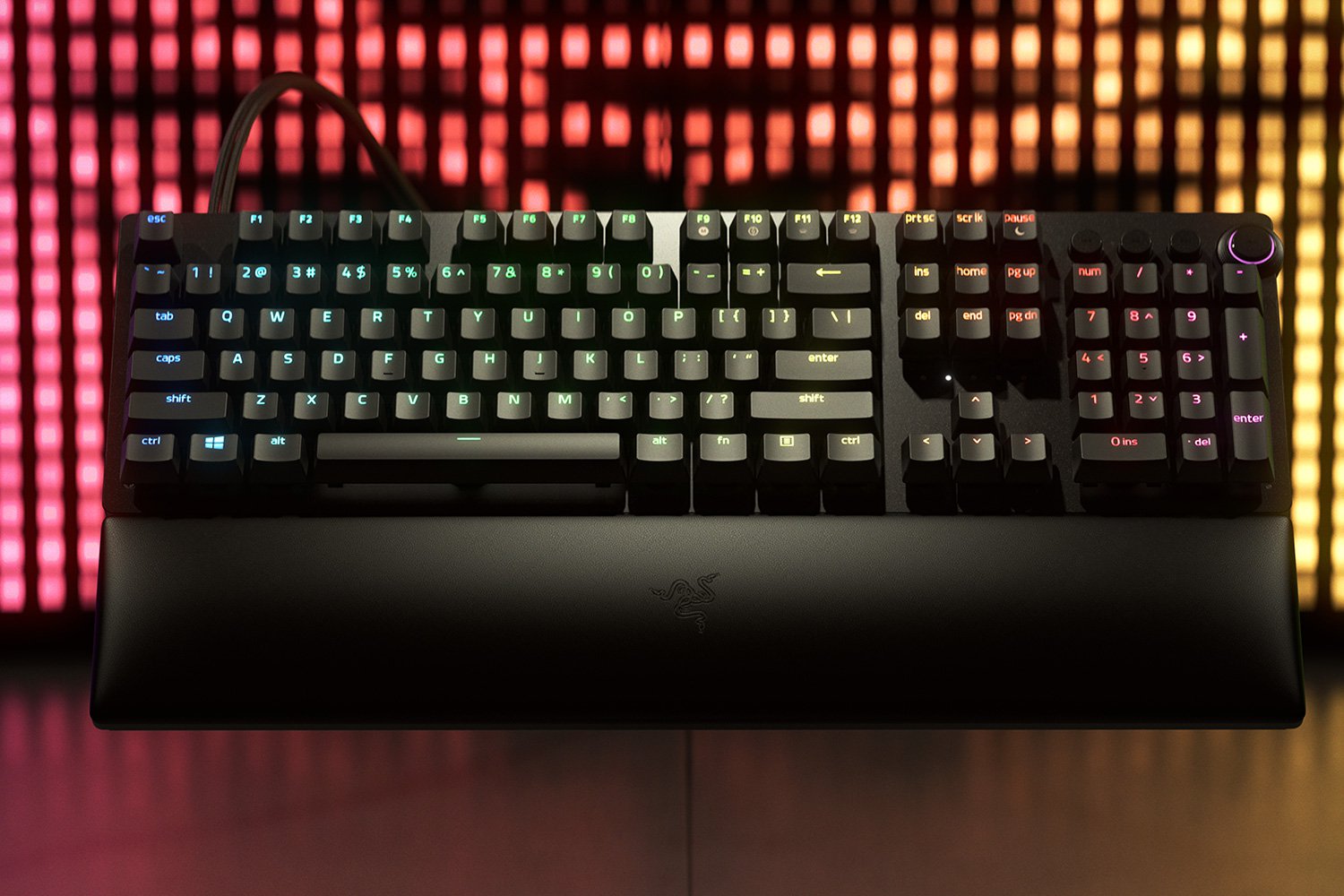 Razer hasn't reinvented the wheel when it comes to the Huntsman V2 Analog and those that got accustomed to the layout of the Huntsman Elite will immediately know where each feature is. The media dial on the upper right is identical to both the Huntsman and Blackwidow Elite, giving four media buttons and a volume dial that can be reprogrammed to other inputs in Synapse. On the left side, you'll still find a single USB 3.0 passthrough port in case you want to keep your headsets all wired into the same chain or have an easy to reach port for dropping in a USB flash drive. The wrist pad remains the same as before and easily clicks into place via integrated magnets, instantly illuminating with the same Chroma designs that color the keyboard. Perhaps the most drastic change to the design is the changeover to a USB Type-C cable for the keyboard itself. Razer includes an adapter dongle to convert to a standard USB Type-A 3.0 port but obviously, this won't be needed on recent laptops and Macbooks. If you're using the USB passthrough port, you'll need to find a spare Type-A port on your computer though.

Tactile response can be the feature that makes or breaks a keyboard for the end user. While some may prefer a loud, clicky response, others may prefer a dampened softer touch, with tastes varying anywhere in between. The Razer Huntsman Elite, as Usman Pirzada put it, was clicky in all the right instances.

The tactile feeling of the keyboard is also just right without being too noisy (although like all mechanical keyboards, you certainly don't want to use this while the spouse is sleeping). I prefer a fast but distinct response in my keyboards (think Cherry MX Brown) and this was clicky without detracting anything from that fast experience.

By comparison, the Razer Huntsman V2 Analog has a much softer input, in line with the Cherry MX Black switches. When you first press a key down, there's a minimal amount of resistance just before a smooth actuation all the way down to the base. You won't even need to invest in a tube of keyboard lubricant like Tribosys 3203 to get a buttery-smooth keypress. While the response isn't as loud and clicky as the Huntsman Elite, Razer has really outdone themselves with an array of satisfying keys that hold up well under the stress of late-night cram sessions.

Video game controllers offer perhaps the best use case for an analog switch. While a digital input offers a binary solution, reading out either a 0 while the key isn't in use or a 1 when the key is activated, an analog switch can provide a much more specific readout. In the case of a stealth game like Metal Gear Solid, moving the controller very slightly in one direction can cause the character to sneak forward while the pace picks up as the controller is moved out to its maximum. The same goes for a racing game, where the player can control a car with much more precision through finer tilts. Each analog switch on the Huntsman V2 Analog should offer a similar level of precision, instead of merely registering when a key is pressed and the embedded light sensor is activated. By way of Razer Synapse 3, you can map the WASD keys to match that of a controller's joystick and have the same level of accurate control that you would on a PlayStation controller. 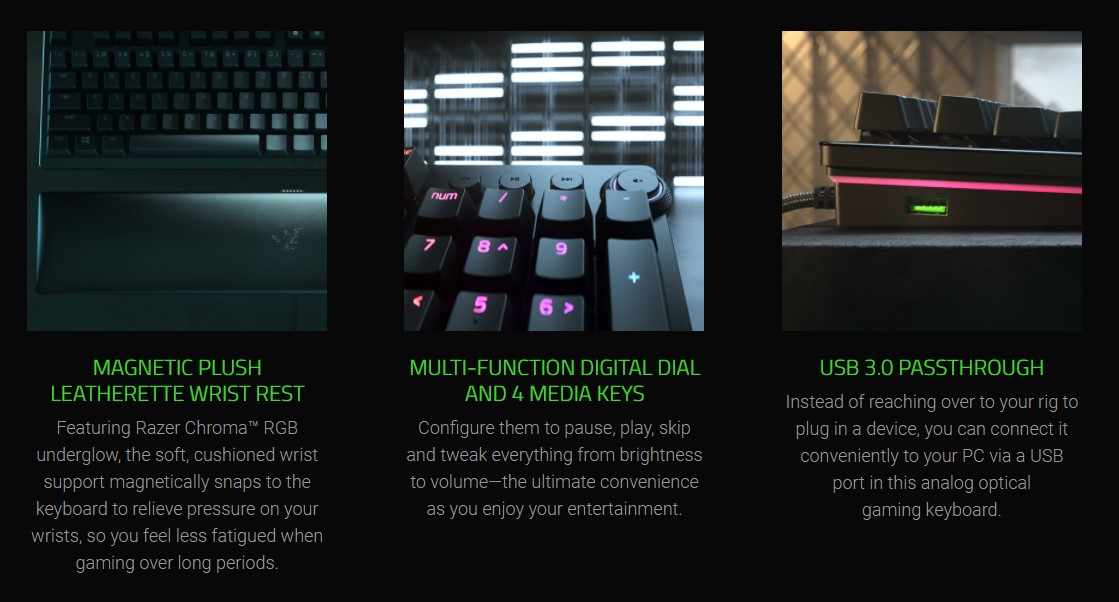 The Razer Huntsman V2 Analog features a dual-step actuation that you won't see across any other keyboard manufacturer on the market, especially not in an optical keyboard. What this means for the casual user is that the keyboard offers the ability to actuate at different points and allow for completely different inputs depending on how far a key is pressed. The customization suite in Razer Synapse 3 allows users to program an actuation point anywhere from 1.5mm to 3.6mm. On top of that, a single key can be bound to two different actions. Through the mapping software, it's possible to map the 'G' key to first equip a grenade when the key is first pressed, program in a set delay in milliseconds, then throw the grenade at a full keypress. The Razer Synapse software takes some getting used to setting up for these dual-step actuation profiles but the theoretical options for build optimization and macros is quite an impressive feat.

Coming in at $249.99, the Razer Huntsman V2 Analog is among their most expensive keyboard offerings but the technology that they're breaking ground with can't be understated. Razer has already proven themselves with one of the fastest response keyboards in the original Huntsman Elite and they've certainly outdone themselves with the Analog model. With only a feather touch needed to operate, expect to see the Razer Huntsman V2 Analog offer up an unfair advantage in the Esports circuit.

Few keyboards impress me like Razer's optical lineup and the Huntsman V2 Analog is among the best I'd gotten my hands on. Although the tactile feedback might not be clicky enough for the average user, power players that want immediate response and full control over their inputs will find themselves with a new secret weapon.