Originally planned for release as Tom Clancy’s Rainbow Six Quarantine, the latest cooperative shooter from Ubisoft Montreal had to undergo some simple branding ahead of release. Rebranded as Rainbow Six Extraction, this tactical squad shooter still retains the core formula that was initially teased: infiltrate a hot zone, complete your tasks, and return to base to fight another day. Whether your friends are together on PlayStation 5, Amazon Luna, Xbox Series X, or PC, players can all group up together into squads of three to fend off the Archaean sprawl. 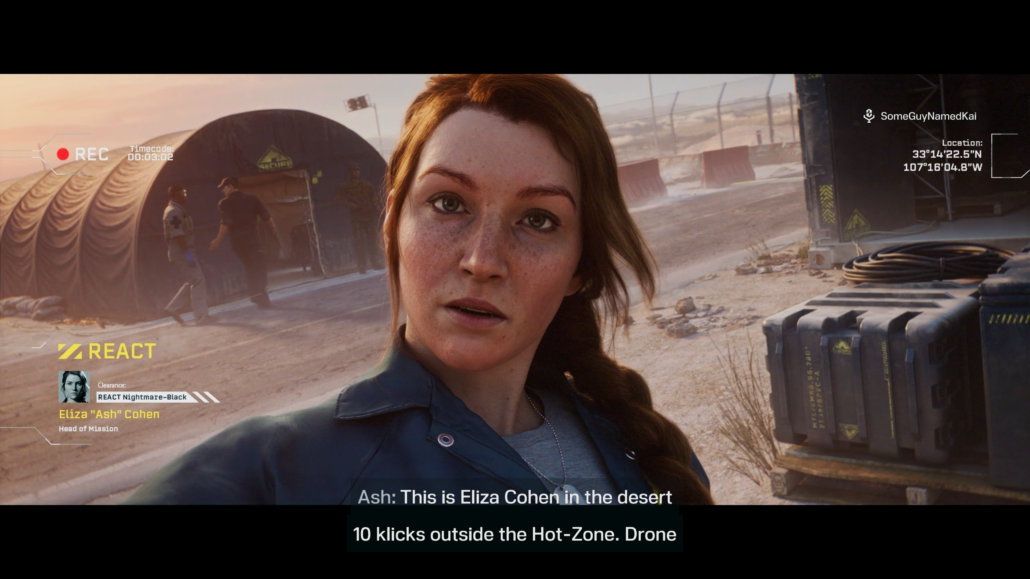 First teased through an in-game event in Rainbow Six Siege, Rainbow Six Extraction focuses on an alien invasion that’s slowly taking over the globe. For those that have been following Siege over the past few years, the limited time mode was Outbreak and focused on a small New Mexico town called Truth or Consequences that proved to be ground zero for the alien threat. Reception to the initial mode seemed strong enough that Ubisoft Montreal was given the green light to adapt a spinoff title that evolved over the years to become that of Tom Clancy’s Rainbow Six Extraction.

By the time players pass basic VR training and become certified to enter the hot zones in Rainbow Six Extraction, the Archaeans have already established a foothold across the globe. To counter this, the REACT unit has forward operating bases across four major US cities: New York City, San Francisco, Alaska (Nome), and the place where the parasite first landed, Truth or Consequences. Rather than trying to save the world from being overrun by Archaeans, the player operators instead focus on research, clearing out enemy strongholds, and rescuing high-value targets from the area. 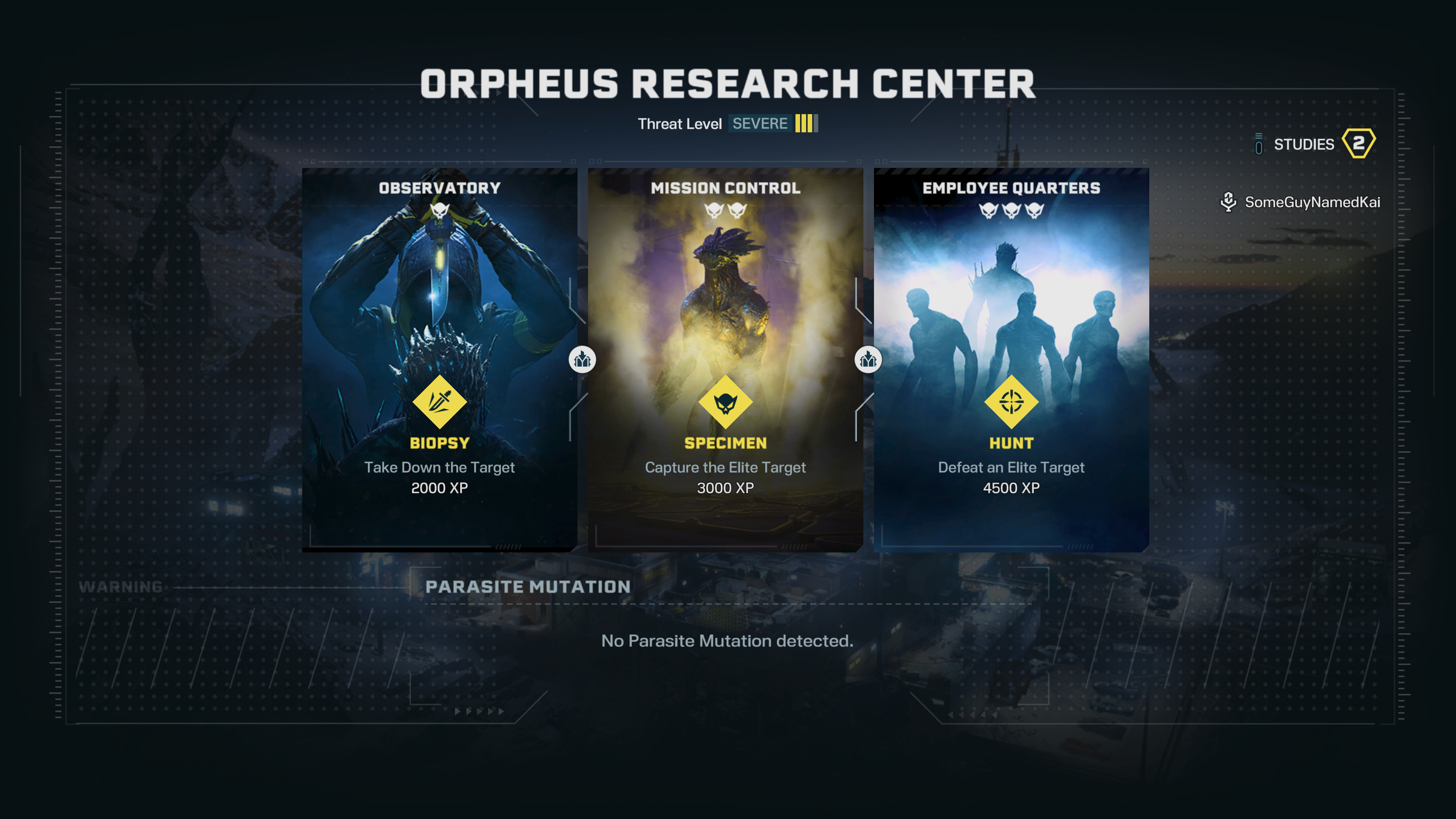 There’s a very simple gameplay loop to Rainbow Six Extraction that players will easily be able to find a good cadence for whether they want to play solo or with two other squadmates. After first picking your operator of a list of up to 18 playable characters (with no duplicates among fellow squadmates) and region, players set off at a randomized dropzone and objective list. Each time the player begins a new deployment, the world layout is slightly randomized. Each hot zone features three distinct sections and players will navigate them from one objective to another across three zones linked together by airlocks. In each of the three sections, players are given a random objective to complete which is portrayed during the pre-mission briefing and loadout sections. Players complete each task in order one by one, proceeding via an airlock to the next section in order. However, each objective can be failed (without simply ending the mission) and players can request an immediate extraction via helicopter any time they don’t feel like the odds are in their favor. Any number of kills or successful objectives feed into the operator’s experience pool and progression as a whole.

All eighteen operators in Rainbow Six Extraction level up independently from one another and much like their Siege counterparts, all have unique abilities and gear load-outs. A level 1 Ela might only be able to lay down a few sticky proximity mines at a time and bring in a 9mm carbine as her primary weapon, but boost her up to level 10 and you’ll increase her primary arsenal to four different weapons and be able to carry more special mines as well as recharge them at a faster pace. Every objective you complete as a given character builds up their independent XP levels and offers new passive advancements as you eventually work to level 10 for each character. 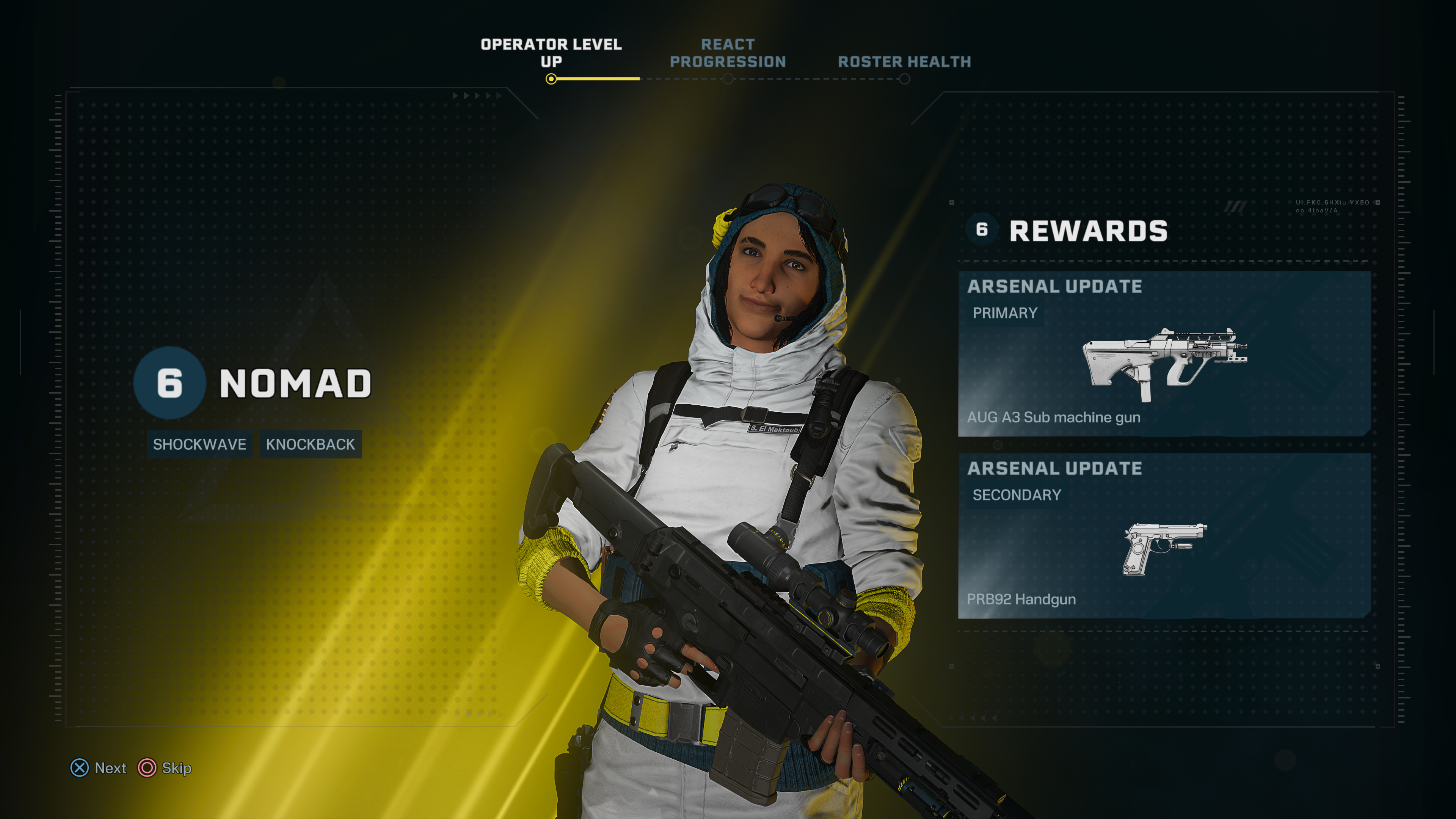 It’s important to not simply focus your efforts on a single operator as one of the core mechanics to Rainbow Six Extraction is the loss of a character as they go MIA or killed, forcing that character to be enveloped in a special stasis foam and left behind for another deployment attempt. What this means for the player is that whichever operator you lost is left behind until you go back to rescue them. The next time you attempt a run in that given sector, one of the three objectives will typically be to rescue that MIA operator. You’re only given a single attempt to complete the rescue; failure to do so will typically lead to a permanent XP loss. While the operator is recovered afterward, that’s still a sizeable amount of time wasted trying to regain that XP.

In a given mission, operators start with 100 regular HP which can be temporarily boosted through the use of medkits or certain operator abilities. This white HP persists between missions and needs to be recovered by staying inactive for so long. If you keep playing as one single operator, everyone else left on standby will recover a small amount of HP after each mission but the active operator will not. Because of this, it’s just as important to rotate through a core group of operators to keep everyone up in fighting shape, For myself, much of my time was spent rotating between Tachanka, Finka, Nomad, and Ela depending on how aggressive I wanted to play. 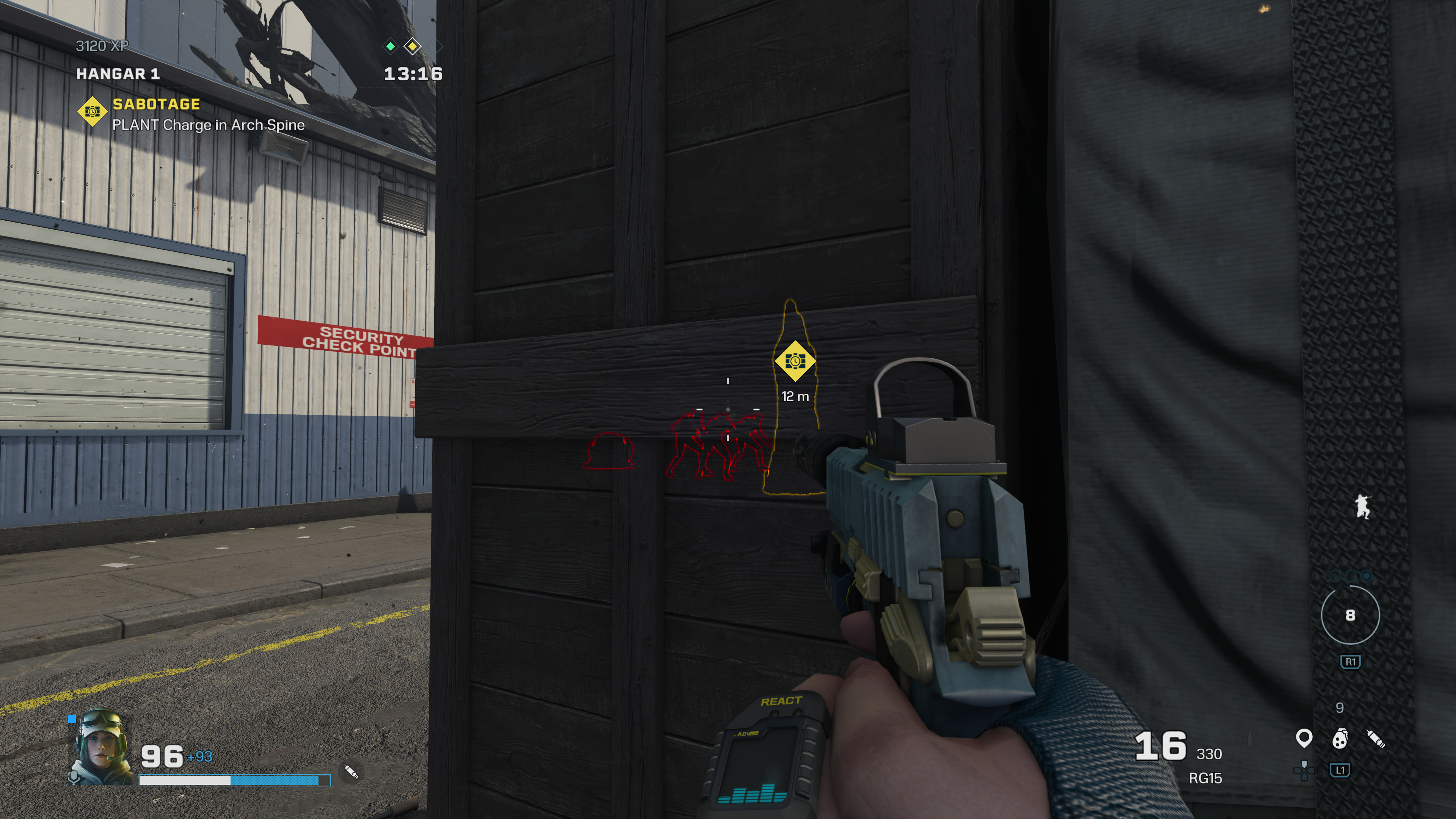 Implementing a Horde mode into Rainbow Six Siege’s tactical gameplay seemed like an initial challenge but one that worked to good effect (with some complications mentioned later on) by instead limiting the number of enemies players encounter in each map phase. On the lower of the four difficulties, enemy counts are fairly limited with only a limited number of empowered Archaeans that typically operate and patrol on their own. For many of the weaker Grunts and Spikers, these enemies are typically found standing and sleeping in place until altered; a single shot from a silenced weapon will typically eliminate the threat. Most maps feature only a limited number of enemies that spawn in at the very beginning. Glowing orange nests indicate enemy spawn points that, once alerted, continuously spawn in enemy units until taken out. By reducing the number of enemies that players face off in a given map, players can instead focus on tactical stealth gameplay or brute force rushing in with shotguns and grenades without fear of being overwhelmed by impossible odds.

Overall, the core gunplay to Rainbow Six Extraction fits this tactical style of infiltration that makes this Ubisoft Montreal entry something unique all its own. The gunplay and abilities feel well molded from Rainbow Six Siege and the complexity never feels like it’s going to overwhelm the player. With a limited variety of offensive weapons and gadgets, combat feels reliable to the point where you can reliably predict how many shots it can take to down an enemy Tormentor or Spiker and the optimal time to sync your reloading between squadmates to clear the more difficult Assignments or Maelstrom Protocol missions.

Maelstrom Protocol and the weekly Assignment missions mark the endgame content to Rainbow Six Extraction and are intended for only the most hardcore of players. Ahead of the launch, we were able to look at just one Assignment mission titled Wall-to-Wall. This variant kept the standard three mission set up but with two important caveats: many more enemies spawning in at the start of a match (all of whom deal much higher amounts of damage) and the necessity to activate a control console and hold out for 90 seconds while endless waves of Archaeans spawn in before the airlock to the next sector can be completed. Maelstrom Protocols on the other hand are a long series of missions that require players to be one of six given operators for that week’s setup. If your Doc happens to be at max level on a week when he isn’t available, you’re stuck working with a different operator that might not be rank 10. Both of these modes are three-player exclusive and might not be worth the hassle for the average player, especially with the sheer number of encounters players have to contend with along with limited ammo and resources.

Where Rainbow Six Extraction falls short is in the simplicity and lack of variety to its missions. Once you’ve played across the four major regions and maps within, there isn’t anything new and exciting that you haven’t seen before. Certain mission types, such as the Serial Scan to hold and control three consecutive scan points while enemy waves come your way, are overly played out and predictable in nature. For those playing solo, there might not be enough content to keep you engaged enough to level up your fifth or sixth operator, let alone all eighteen. Because of this, I could only genuinely recommend Rainbow Six Extraction to those either with a like-minded group of friends that don’t mind the repetition or those that want to enjoy the experience brand new with complete strangers through quick play. And with Rainbow Six Extraction being online only (not even solo play is available without an Internet connection), this particular Ubisoft shooter isn’t well suited for those that just want to play through the story and call it a day.

For being a sort of spinoff from Rainbow Six Siege, Rainbow Six Extraction holds its own by turning the tactical gameplay completely around in a special kind of PVE horde survival that evokes the same kind of tension you might see from more hardcore entries like GTFO. By focusing on smaller-scale skirmishes, Ubisoft actively rewards and promotes players to use their operator abilities to mitigate an encounter rather than always going in guns blazing. While that sentiment doesn’t carry over into the currently poorly tuned endgame content, the twenty to thirty hours of regular matches that players can enjoy with a group of friends can be quite rewarding.