I've reviewed quite a few remastered over the past few years. Oddly, none of them had already been reviewed on this site before, though that was due to age. I honestly never expected to review a game that is barely older than some of the things I have in my fridge. On the subject of six-year-old things left in my fridge, I'm reviewing something with the same characteristics: dark, damp and altogether dismal. That's right; It's Project Zero: Maiden of Black Water.

For all you freedom-eating, apple-pie loving yanks, that's Fatal Frame: Maiden of Black Water. If you're from Japan and currently getting touched by a Cthulhu-like appendage, it's just called Zero. Not that you needed any help to figure that out, you just added "Project" for us folks in Europe and Australia. Is this remake, younger than the average person in a Japanese pornographic game but stated as being eighteen, worth your time? Let's find out. 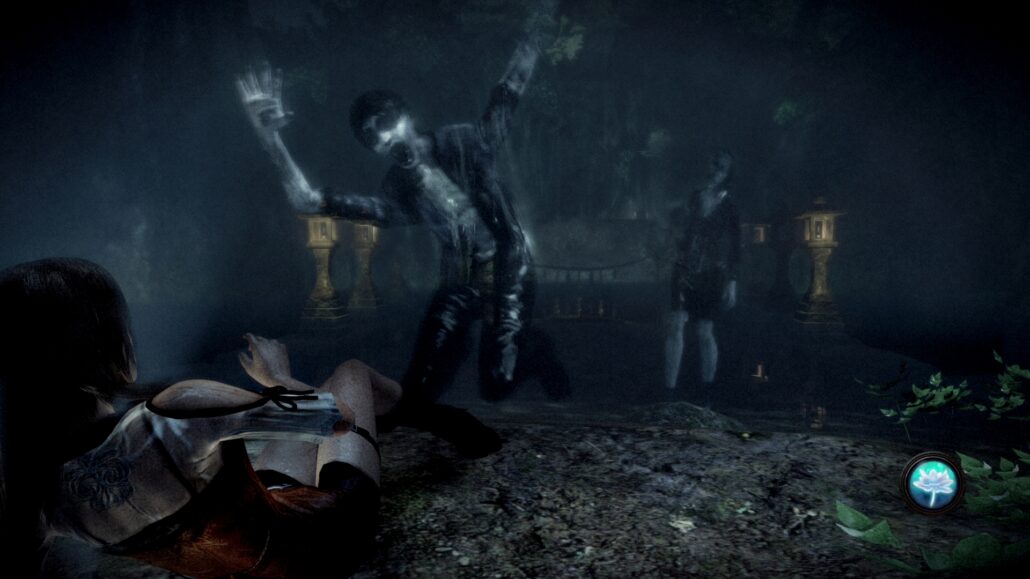 After that introduction pointing out that this has been released just six years after the original, I should explain why. For those who didn't own the original, Project Zero: Maiden of Black Water came out for the Wii U. Yes, the Wii U. You know it, the console that was about as successful and well-received as a wet fart with serious follow-through in a broken-down elevator. I even mentioned that this site has a review of the original; you can find it here. Many of the things Dave brought up then, I ended up thinking now.

Every single time you head up Hikami Mountain, you know what you're going to run into. The absurd thing is that you would not make the trip up that mountain, particularly after the first time when you've been mobbed by ghosts as you would by Mosquitos while on a trek through the Amazon rainforest. Or, at least you wouldn't go up there during the night and when it looks like it's going to bloody rain.

The reason for this is simple: I don't remember seeing many ghosts during the day, and when you're wet, you take more damage. Now, it's nice that the game has found a reason to include water and its effects. I'm not sure why ghosts do more damage and get angrier when you're wet - is it because they don't like young girls in revealing wet shirts? Frankly, I don't know why; half the ghosts are attractive enough that I'd rather have sex with them than fight them. You also deal more damage when wet - maybe it helps the photos you take develop quicker? 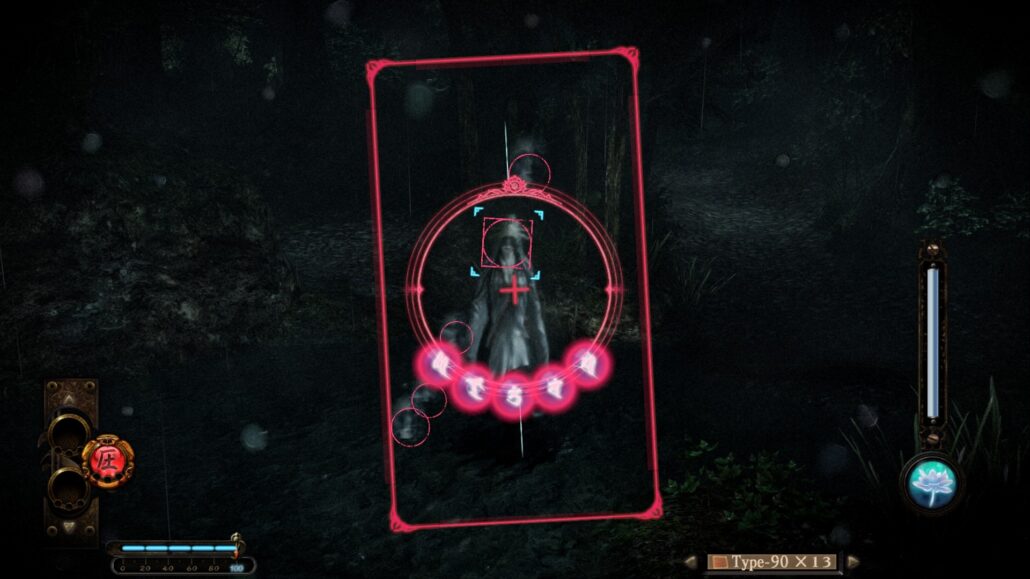 If you're unaware of the Project Zero series, that's what you do. You take pictures. When wandering around the mountain and the areas on it, you're going to spot some spooky apparitions. You'll want to take some photos of these, racking up points you'll then spend on items for later stages. These items can range from the film for your camera, healing items, or items that reduce your wetness. You'll also be taking pictures to fight off the more violent ghosts, ones that swarm towards you, aiming to take you into the afterlife with them.

Honestly, it's remarkably tense to see a PS2, possibly early PS3-era swarm of ghosts charging towards you, looking like you've just sat on their birthday cake. You'll look to get them in the shot with your spirit camera and deal damage by taking their picture. After the first shot, you'll notice a few more weak points pop up. The aim is to rotate your camera to get as many in as possible, five or more ideal as it damages them the most.

I never owned this on the Wii U because I wasn't one of the five people who owned that horrible mess, though I did have a go on a friends version. Using the tablet to aim and rotate the camera was a decent enough idea. It could have been sluggish using a controller. Fortunately, aiming with the joystick and rotating with the triggers is smooth and responsive, meaning I never got caught out unfairly. You can tell it wasn't a mechanic designed for the controller, but it works. Also, I'm told the PS5 controller's gyro sensors allow you to replicate the Wii U tablet's mechanic.

Speaking of controls, I wonder why the characters here feel like they're either pensioners or walking through treacle. Is it for the atmosphere? If so, it's not helping much. Project Zero: Maiden of Black Water is dripping with atmosphere without needing to make you walk like you've got a broken hip. It's clunky. There's reason gameplay-wise either; the ghosts coming to claw at your wet t-shirt covered luscious young body are all scripted, so running from area to area would not be a bad thing. It isn't to say you can't run; you can; it's just that your run is the pace of a regular person's walk. 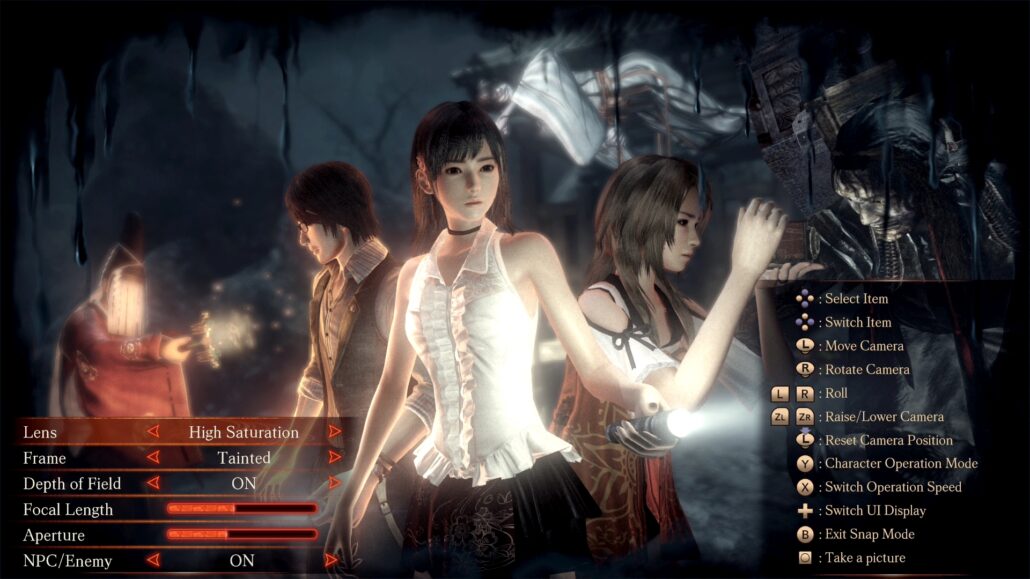 There are other features I should mention when it comes to controls and combat. During combat, if you essentially play spectral chicken, waiting until the very last second to take your picture, then you enter fatal frame mode, letting you take as many photos as you want without your film needing to reload. Also, a mainstay for the series, when you see an item, you move in to pick it up in the slowest way possible ready for a ghost hand to grab you randomly. I'm not sure if it's the same hand each time or if there are hundreds of ghosts watching random loose objects, but it's the primary thing that acts as a jump-scare.

As for why this particular mountain has more ghosts than the end of Ghostbusters? There's some strange plot about sacrifices, mass murder and a few suicides to boot. It's not the most accessible or relatable stories, apart from the mass murder aspect anyway - because who hasn't killed a group of young women out of fear that they can read your mind? I'm honestly half-tempted to kill Yuri, Miu and Ren just for being stupid enough to keep heading up ghost mountain at night.

I would argue that the real reason you always bugger off out at nighttime isn't because of any real story-focused reason. It's simply that the Wii U didn't have the capabilities to display anything that looked better than your first ever etch-a-sketch. I don't think Maiden of Black Water looks terrible, but it's dated simply because no actual work has gone into it. The difference between the two? This version is a little brighter and with a few colour changes. 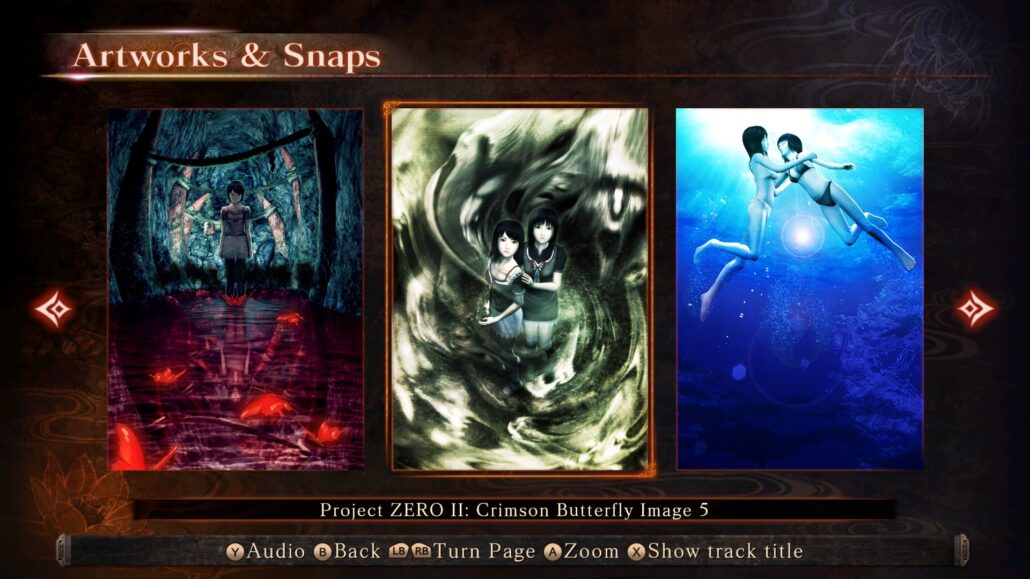 What does this remake? Re-release? Reappearance? What does this version of the game bring that's different? Honestly, I never owned the original, but it seems that there are some new costumes and accessories to buy using ghosty camera points, even if some originals are missing (no Samus costume). I'm not sure if this was in the original, I'm assuming not, but there's also a mode that lets you see snaps and listen to music from all previous titles in the series.

Project Zero: Maiden of Black Water was never a great game. It still isn't. The story is contrived and nonsensical, but it is somewhat redeemed by having an excellent atmosphere. Some of the moments are genuinely creepy; the camera is still a novel and interesting combat method, with different films and lenses adding a thin layer of tactics. All in all, I don't even know if I recommend the game. I had a decent enough time with it, but I've always liked anything horror.

Project Zero: Maiden of Black Water is a strange release. It's not a remake, nor a remaster, feeling more like a re-release with a few added features. Visually, it's barely different to the Wii U Release, so if you've already played it, then there's not much I can say. However, considering the original was limited to the Wii U, with a limited audience, this version brings it over to modern consoles and the PC, keeping the excellent atmosphere and different combat system and making it control better than expected. Is it worth buying? That is very dependent on if you like horror games.