The future of Stadia as a platform is very much in question following Google’s recent cancelling of all first-party development and admission that they’re more interested in licensing their streaming tech to others at this point. That said, Stadia is still getting a small handful of third-party exclusives this year, including the PixelJunk Raiders from Q-Games, which is available now for all Stadia Pro subscribers.

The PixelJunk series is known for switching genres (and platforms) with almost every entry and PixelJunk Raiders sees Q-Games enter the increasingly-crowded realm of the roguelike. The game also makes interesting use of Stadia’s unique capabilities, most notably its State Share feature. Is PixelJunk Raiders a tantalizing hint of what Stadia-exclusive games could have been or just the latest proof Google’s big promises were all bluster? No pixel will be spared in our final analysis…

PixelJunk Raiders casts players as an unnamed mercenary who’s been hired to save the hapless residents of the planet Tantal, which is threatened by a solar-system-sized anomaly that’s spawning all manner of tentacled space oddities. Unfortunately, If you’re expecting a compelling narrative beyond “save good aliens, kill bad aliens” you’re in for a disappointment. The game doesn’t even do a particularly good job of explaining what your ultimate goal or purpose is. The game’s stylized visuals do set a certain lonely, otherworldly tone, but don’t expect anything impressive on a technical level. The chintzy still-image cutscene the opens Raiders sets the tone and low-poly models, stiff animations, and smudgy textures are the rule for the rest of the game. Between its lack of story and somewhat shabby presentation, I didn’t find myself particularly captivated by PixelJunk Raiders’ world.

Just a couple of paragraphs back I referred to PixelJunk Raiders as a roguelike, but that description may be a little misleading. Raiders is certainly inspired by roguelikes and Soulslikes, but I’m not sure it quite qualifies as either. The game’s missions are procedurally generated, but once one is created, you’re free to revisit as many times as you want. Heck, you even get multiple lives to complete each mission! The game also features a rather generous upgrade system that lets you permanently upgrade your HP, SP, special moves, and more, as well as a battle-pass-like series of unlockable buffs and useful items. So yeah, this is no hardcore roguelike, but it also falls well short of the Souls games in terms of craftsmanship and detail. Raiders occupies an unsatisfying middle ground, lacking the enticing level design and world-building of the best Soulslikes and the unpredictability and bracing challenge of the best roguelikes.

With the exception of a few boss fights, your goal in every mission is the same – find and rescue a select number of Tantallians, who like to hang out in clusters in ruined cities, canyons, and other places that are almost always swarming with enemies. Save all the aliens within an area and you’ll disable an overhead satellite and unlock an “Artifact Core,” which you can use to heal yourself. Typically, you’ll have to save two or three clusters of aliens to complete a mission and, along the way, you’ll pick up weapons, temporary stat enhancers, gems that can be spent on various things, and treasure that can be converted into XP. A sense of routine sets in quickly.

Combat is simple, perhaps to a fault. You can hold weapons in your right and left hands (a few require both hands), lock onto enemies, dodge, and parry. A variety of other attacks can be unlocked throughout the game. Combat feels stiff and unresponsive and dumb enemy AI doesn’t provide much challenge except when the game mobs you with large groups of baddies (which it does often). The game’s approach to weapons adds an extra layer of frustration, as they’re oddly hard to find, degrade rapidly, and are stripped away if you lose even a single life within a mission (thankfully, you can unlock the ability to retrieve them from your fallen body Dark-Souls-style). The end result is a sci-fi action game where you spend an inordinate amount of time feebly smacking aliens with your bare fists.

My Protip is to not beeline directly towards the aliens you’re supposed to save, but rather explore each mission’s randomly generated level a bit first. At its best, this is arguably the most satisfying part of the game and you’ll often find some nice weapons and other goodies on the outskirts of the map. Often, but not always. The random nature of PixelJunk Raiders’ mission means sometimes you’ll scour an entire map and find nothing of note. Other times you’ll find a pile of kickass weapons right by your starting point. Yes, randomness is a hallmark of Rogue-inspired games, but the good ones usually balance the loot you find better than this. Coming up bupkis on a mission is particularly demoralizing, as exploration is a slow process – Raiders never gives you a hovercraft or space horse to ride, you have to get everywhere on foot and you can easily spend 30, 40 minutes exploring a map.

Ah, but there is a way around PixelJunk Raiders’ stingy approach to weapons and items. Simply capture and share a screenshot of any of your procedurally generated missions, and Stadia’s State Share feature will allow others to play a copy of it. Of course, you can play other people’s missions as well. Those who share a mission can drop useful weapons around the map or leave behind “Imprints” – ghostly images of their avatar that other players can receive useful items from. Those who play on a map you share can also add their own Imprints to it and reshare, eventually making even the hardest missions manageable as they pass from player to player.

PixelJunk Raiders’ implementation of State Share is certainly innovative and makes playing the game significantly less frustrating. That said, it’s hard not to feel that Q-Games is using State Share to cover for Raiders’ unbalanced approach to weapons or items. Or perhaps the game is intentionally miserly about weapons in order to encourage State Share use (it almost feels required for boss battles and later, high-level missions). I have nothing against Q-Games building their game around State Share, I’m always in favor of developers maximizing the platforms they’re on, but I do wonder why Raiders does such a poor job explaining this core feature. The game briefly mentions how State Sharing and Imprints work, but I had to do my own online research to figure out the fine details. There’s also no way to find State Shares within the game itself – if loading up other folks’ missions is how PixelJunk Raiders is meant to be played, I shouldn’t have to track down a fan-curated spreadsheet to find good ones. There’s also the question of what will happen to this game in the future. The Raiders community sharing missions is small as is, so what happens when it completely dries up? The game will be essentially unplayable beyond a certain point.

But it’s not State Share quirks, a lack of weapons, or clunky combat that sinks PixelJunk Raiders. It’s got a far more fundamental problem – it’s just dry. Very, very dry. The game does ever-so-slowly evolve as you play, gradually adding new enemy types, side-mission objectives, and sights to explore like towers and leafy oases, but it’s just not enough. Ultimately, almost every mission still shakes down to “run around a desert environment, whack boring enemies, save the same copy-pasted alien for the thousandth time.”

PixelJunk Raiders is an interesting concept stretched well beyond its breaking point. The PixelJunk games have traditionally been simple arcade-like experiences, and there’s enough content here for a punchy 5-to-10-hour adventure. Instead, the fun is spread far too thin, turning the experience into a ponderous trudge. Perhaps some will be able to find some zen satisfaction in exploring the same dusty vistas time and time again, but personally, PixelJunk Raiders has already pilfered enough of my time.

For this review, PixelJunk Raiders was played using a Stadia Pro subscription provided by Google. 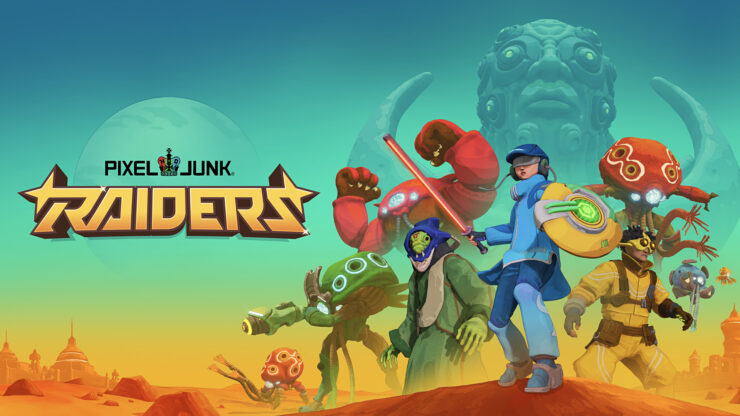 PixelJunk Raiders has a unique vibe and some interesting ideas, including smart implementation of Stadia’s State Share feature, but it isn’t anywhere near as fleshed out or polished as it needs to be. Cheapo presentation, clunky combat, unbalanced roguelike mechanics, and a lack of variety combine to extinguish the game’s promise. PixelJunk Raiders may stand out like a minor oasis on the desolate Stadia release calendar, but there’s a much wider, more vibrant world of roguelike-flavored games out there to explore.