Much like series protagonist Phoenix Wright, the Ace Attorney games are a somewhat unlikely success story. First launching in Japan under the name “Gyakuten Saiban” in 2001, the original Phoenix Wright: Ace Attorney was localized and re-released worldwide on Nintendo DS in 2005. Despite a general lack of fanfare surrounding the game, it found its niche, becoming an under-the-radar hit and introducing many Western gamers to the visual novel genre. Since then, there have been numerous Ace Attorney sequels, spinoffs, and crossovers, but for many fans the series’ first three games remain the gold standard.

Well, Phoenix Wright: Ace Attorney Trilogy gives those early adventures another opportunity to shine. For the first time these games are available in HD on home consoles, but is the courtroom drama as riveting as it once was? Let’s see if these games still hold up to cross-examination…

For those who have never played an Ace Attorney game before, they star the seemingly hapless, yet secretly skilled (or lucky) spikey-haired defense attorney Phoenix Wright. Much like a good episode of Matlock, Phoenix’s clients are almost always innocent and winning your case is a matter of nailing the real culprit on the witness stand. That’s no easy task, as you’ll be facing off against a coterie of quirky anime prosecutors, who will do almost anything to procure a conviction. The first game introduces Phoenix and his supporting cast, including his mentor Mia Fey, assistant Maya Fay, and friendly rival Miles Edgeworth, the second game, “Justice for All,” further explores the Fey clan and their mystical abilities, and “Trials and Tribulations” ties up the trilogy with a storyline than spans multiple years.

The Ace Attorney games all maintain a relatively cheery tone, with each having its share of one-off “filler” cases, but this fluffiness is deceptive. Story threads form in the background as you solve cases and are tied together in satisfying fashion in each game’s final chapters. Yes, the writing is often a bit goofy, but every once in a while these games will blindside you with a surprisingly dark or heartfelt moment. The first Ace Attorney executes this shift from silly to serious perfectly, and Trials and Tribulations does a marvelous job of drawing in elements from both its predecessors. Unfortunately, Justice for All suffers slightly from middle child syndrome, serving up a couple iffy cases (the one set in a circus is particularly irritating), but its comparative weakness doesn’t sink the trilogy as a whole. The localization of all three games is solid, although a few obvious typos continue to live on and some of the tacked-on “timely” jokes haven’t aged well. From midi-chlorians to talk of milkshakes bringing all the boys to the yard, these games are a graveyard of mid-2000s references I think we’d all rather forget.

Ace Attorney Trilogy’s localization might be a bit dusty, but the collection’s visuals have been nicely updated. Capcom has redone all the art, with the Switch version running at a nice, crisp 1080p while docked and 720p in handheld mode. Surprisingly, this new clarity can make the game’s animations feel a bit stiff at times. I don’t think Capcom has removed any frames -- the series’ limited animation is just more noticeable at this resolution. Maybe it’s just because I’m more used to playing Ace Attorney games on a DS/3DS, but the game actually looks more appealing in handheld mode. The games still don’t have any spoken dialogue (aside from HOLD IT! and OBJECTION!, of course) but Capcom’s music remains fantastic, which each major character getting their own unique theme.

The Ace Attorney games all follow a similar format, with gameplay being split between investigation and trial sections. The investigations are standard visual novel stuff – you move freely between a small number of locations, where you can search for clues or interrogate various oddball characters. Once you’ve collected enough evidence, you move on to the trial. The games control great on the Switch – you can use the touchscreen to examine the environment and select items, but if you’re playing on the TV, the game’s traditional controls are simple and responsive.

While not bad by any means, the investigation sections aren’t the Ace Attorney series’ strong suit. This latest collection includes a new magnifying glass icon that shows you what items can be interacted with, making your detective work less of a pixel hunt, but the games still don’t do a great job of communicating what you need to do next. Too often you’ll end up stuck and mindlessly cycling through all available areas and options trying to find that one clue or dialogue option you missed. I realize visual novel fans have been putting up with these types of issues forever, but newer entries in the genre, like Spike Chunsoft’s Danganronpa games, have introduced tweaks that make investigating less frustrating.

Thankfully, investigations sometimes being a touch irritating isn’t a killer, as the real core of the Ace Attorney games are the trials. These games don’t exactly go for realism – juries don’t exist in the world of Ace Attorney and seemingly every case is decided by a single very-gullible judge. Prosecutors make their case, and you have to sift through witness testimony line-by-line and either press for more details or present evidence to prove they’re lying. The second and third entries in this collection also introduce “psyche-locks,” which require the player to present numerous pieces of evidence in order to break through a witness’ mental blocks and force them to tell the truth.

The logic at work in trials can get tricky quickly, and you will be punished for making random guesses, so you have to use your head. There’s a satisfying push and pull with the prosecutors, with each trial serving up plenty of ups downs through numerous rounds of testimony and cross-examination. Occasionally, you’ll figure out the mystery before Phoenix does, and will have to jump through several needless hoops before reaching the obvious conclusion, which can be a bit bothersome. That small complaint aside, Ace Attorney’s trials are a ton of twisty fun.

Unlike some of the overly-wordy recent entries in the series, the original Ace Attorney games are pretty much the perfect length, with each clocking in at around 15 to 20 hours. That’s upwards of 60 hours of courtroom drama for only 30 bucks, which strikes me as a pretty reasonable lawyer’s fee.

This review was based on a Nintendo Switch copy of Phoenix Wright: Ace Attorney Trilogy provided by publisher Capcom. You can purchase the game for PC via Green Man Gaming or through the Microsoft Store. 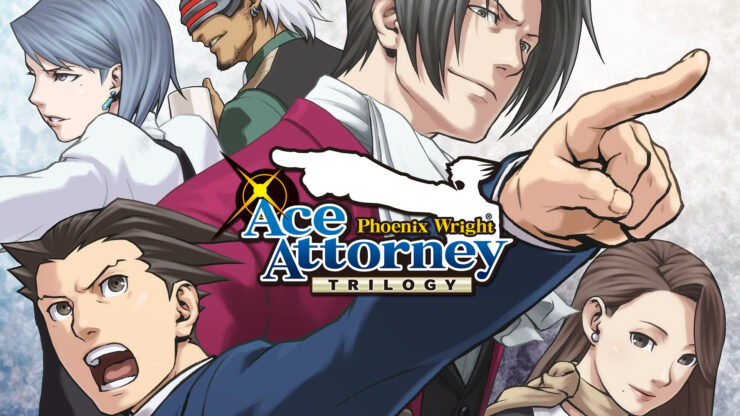 Phoenix Wright: Ace Attorney Trilogy is a satisfying collection of mysteries, many of which are still as sharp as when they were first published. Sure, certain aspects of these games feel a touch dated compared to some of the newer, edgier visual novels out there, but few can top Phoenix and friends when it comes to charm. This HD update is a bit barebones, but, overall, these classics are well-represented.