Pathfinder: Wrath of the Righteous

It's undeniable that the past few years have been great for tabletop role-playing game fans who also happen to love video games, thanks to the release of some amazing games that manage to stay true to their RPG roots while offering excellent experiences.  Among these games is Pathfinder: Kingmaker, a faithful adaptation of the tabletop game that unfortunately failed to be a game that even newcomers could enjoy, as the great depth of its experience wasn't explained properly inside the game itself. With Owlcat Games fully aware of these issues, the team set out to fix everything wrong in Kingmaker with Pathfinder: Wrath of the Righteous, a game that is decisively above its predecessor in pretty much every single aspect, from accessibility to role-playing, combat mechanics, and more. 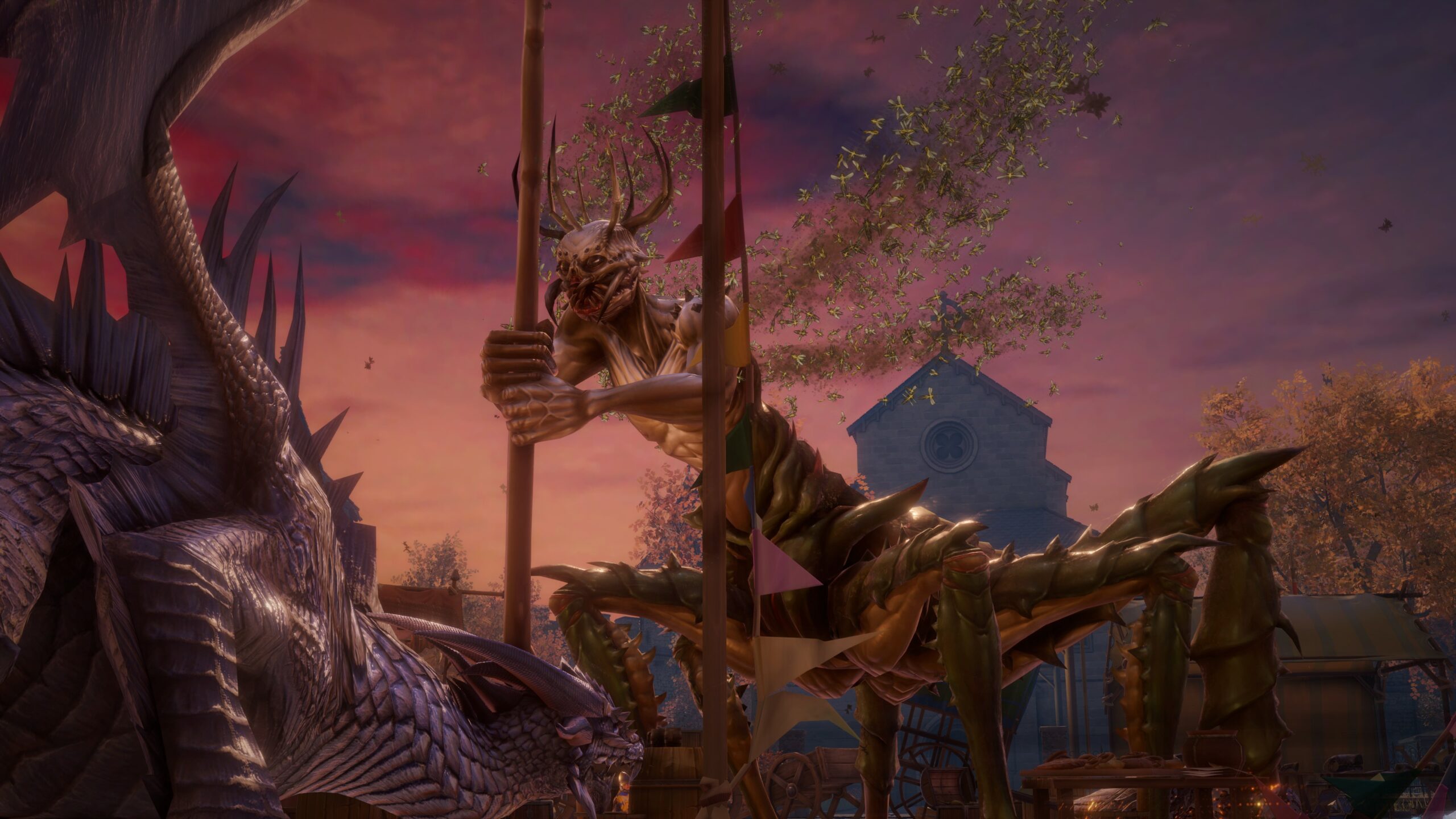 Pathfinder: Wrath of the Righteous focuses on the journey of a very special Crusader who is destined to lead yet another Crusade against the demons that are coming forth from the Worldwound, a demon-haunted wasteland that was created when a planar tear to the Abyss opened after the death of the god Aroden. Right after the Crusader reaches the city of Kenabres, all hell is let loose by the demon lord Deskari, who manages to attack the city despite the protection of the Wardstone, an artifact meant to ensure the demons of the Worldwound cannot venture into Mendev. Following the attack on the city, the Crusader falls deep underground alongside a few survivors, not knowing that this will only be the start of a journey of epic proportions that will also lead them to gain otherworldly powers to fight the demons and save the land from destruction.

The Pathfinder: Wrath of the Righteous story is a classic fantasy story that is written extremely well. While the actual pacing depends mostly on the quests players decide to complete, the tale is undoubtedly gripping, especially for fantasy fans. Sure, there isn't any major, unpredictable twist, but they are not always needed to make a story interesting and engaging. Companions are also written quite well, although some are way more interesting than others, such as the mongrel Wenduag, the nobleman Daeran and the talking weapon Finnean. Specific character quests also delve deeper into their backstories, developing them even further and making them feel even more interesting.

The chosen Mythic Path also influences the story greatly, and it is definitely the Pathfinder: Wrath of the Righteous most remarkable feature. As the demon hordes are more powerful than ever, the Crusader will have to use the powers of Mythical beings to stop them for good, and the chosen Path will influence the allies that will join your army and how your companions see and interact with them. The 10 Mythical Paths range from the straightforward Angel and Demon paths to the Gold Dragon, Lich, Legend, and Devil paths, opening up different dialogue options and unlocking different skills that add a lot of depth to the experience. 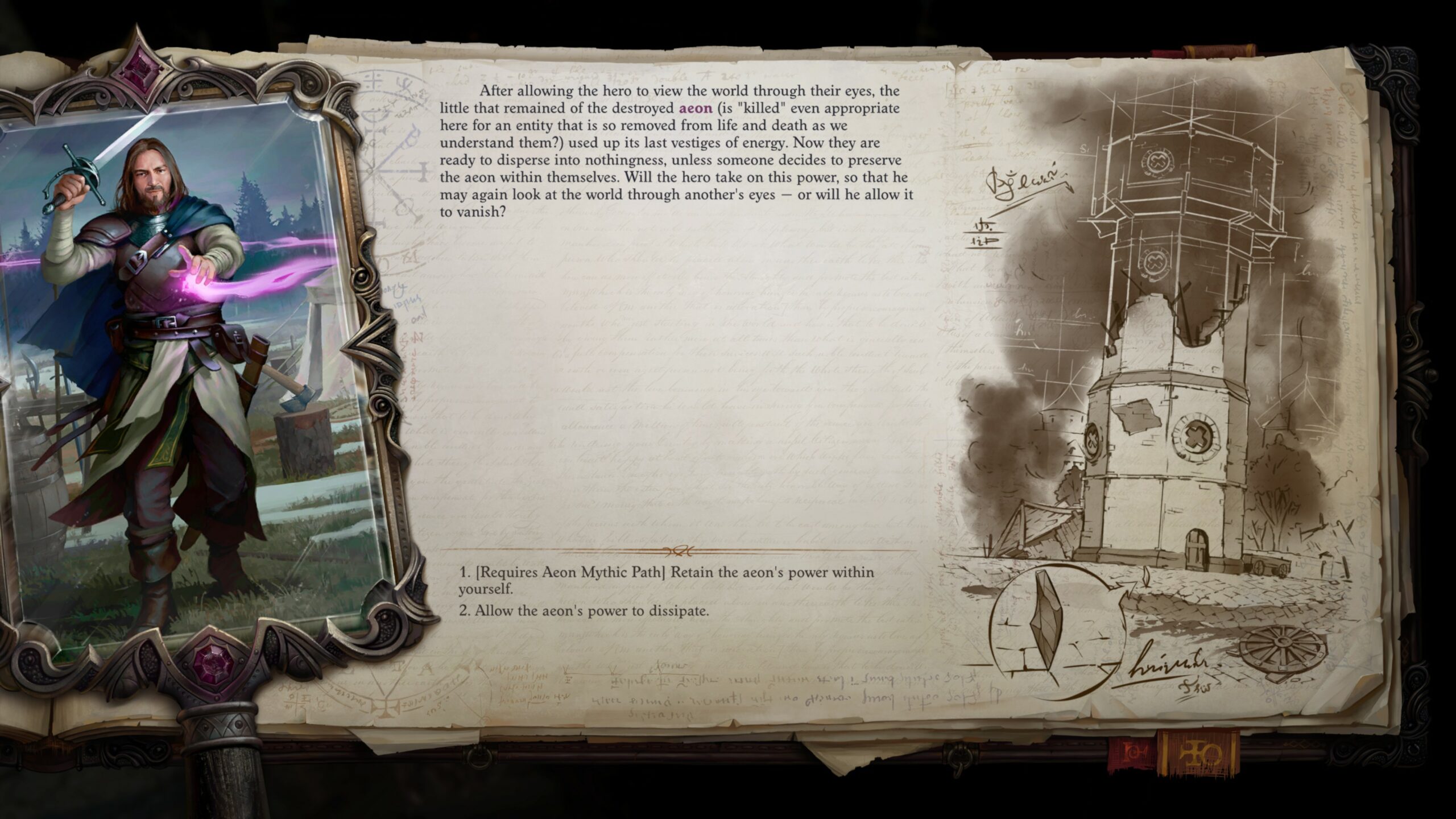 As with the story, Pathfinder: Wrath of the Righteous attempts to do something slightly different without straying too far from its roots in its gameplay. At the start of the adventure, you will be able to create your own Crusader or pick between a few pre-generated characters. Those willing to create their own character will find an almost unprecedented wealth of customization options, such as a huge amount of classes that include some very unique archetypes that are not found in similar games (some of them even able to mount creatures), allowing players to approach the game's many challenges in some very unusual ways. Despite the presence of some unusual options, they are all extremely faithful to the Pathfinder experience, so those who have played the tabletop RPG will have no trouble creating some very unique characters.

The wealth of character creation options is definitely intimidating, but Owlcat Games has done an amazing job this time around, providing all the guidance players need to make the most out of them. Alongside some very on-point explanation of each and every stat, the developer added a recommended build option that pretty much activates an automatic level-up option that works great for newcomers. This option works great also as a guide for players who are unsure of how to build their character, as it can be turned off at any time. The automatic level-up option is available for companions, further streamlining the experience and making Pathfinder: Wrath of the Righteous a little more welcoming.

It's undeniable that making Pathfinder: Wrath of the Righteous a game that newbies could enjoy from the very beginning was one of the developer's main goals. Whenever a new gameplay mechanic is introduced, the game shows contextual tutorials that provide an explanation of said mechanic, which helps a lot in understanding what is going on, especially if the real-time combat system is used: things get chaotic quite easily, and it can become difficult to keep track of what is going on as spells fly around and demons fall to the ground. 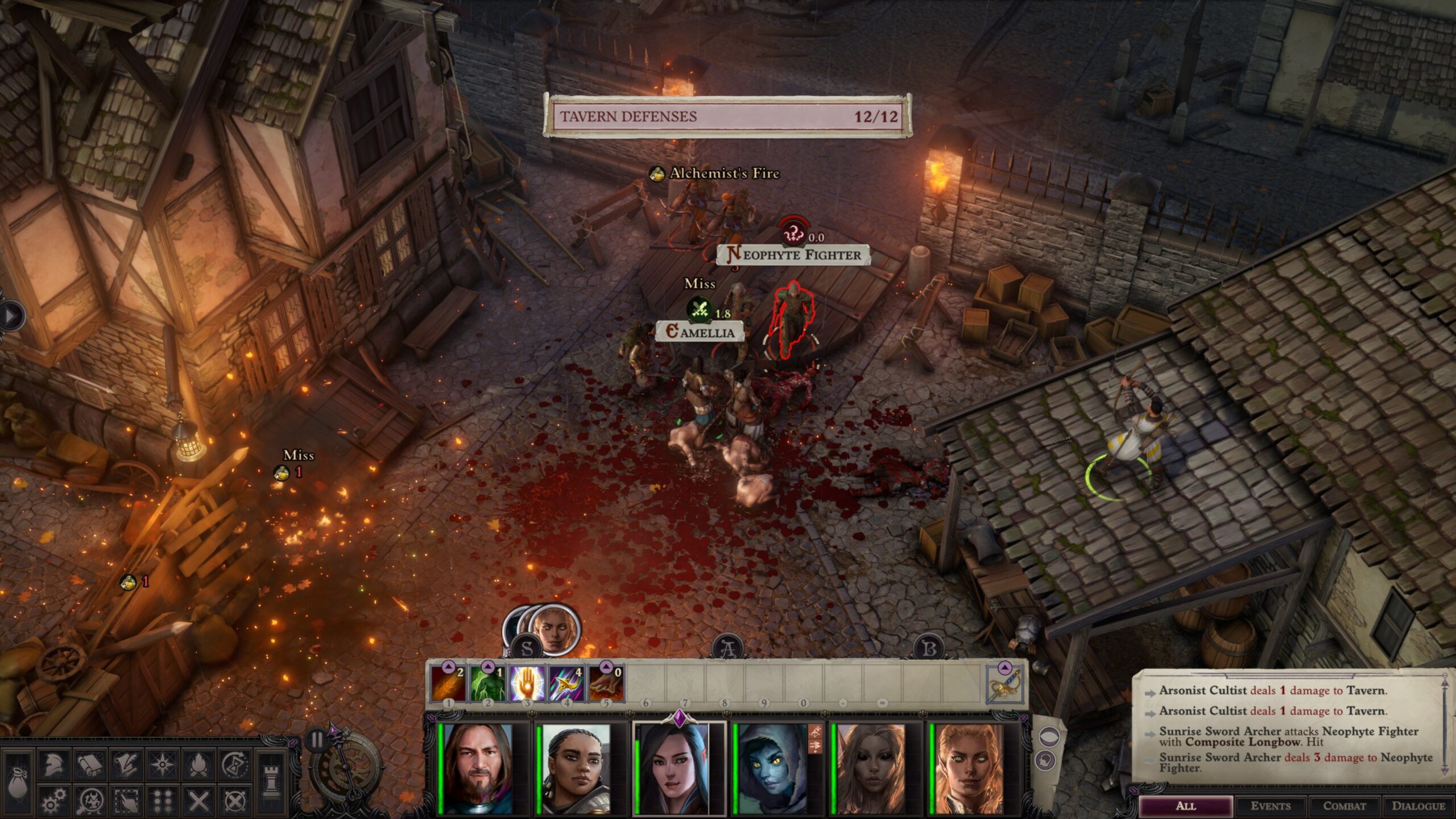 If the classic real-time combat with pause is too chaotic for your tastes, Pathfinder: Wrath of the Righteous also features an extremely welcome turn-based tactical option that turns the combat experience into something completely different, possibly more faithful to the tabletop experience as well. This option, which can be activated at any time during combat with no penalty, slows down the game's pace considerably, so it's not advisable to turn it on for every enemy encounter, but it also provides players with considerably more control over their characters. In the heat of real-time combat, giving characters the proper commands can be difficult, which is quite needed considering the AI is not good at controlling them.

Leading your companions into battle is just one of the many responsibilities you have as a member of the Crusade, as you will also have to build cities and lead armies into massive tactical battles at certain points during the story. The Crusade gameplay mechanics in Pathfinder: Wrath of the Righteous see the Crusader build and manage cities, lead troops, listen to advisors and pick the right path to victory. The depth of these mechanics is almost daunting, as the choices you make during the adventure and the Mythical Path you take will also influence the Crusade gameplay.

It isn't just the Crusade mechanics that feel a little daunting in Pathfinder: Wrath of the Righteous. Despite Owlcat Games' efforts in streamlining some aspects, the game will still be an intimidating experience for RPG newbies and those with little to no experience with tabletop RPGs. Every little action in the game, whether in combat or while exploring the game's different locations, is regulated by dice rolls and skill checks, which essentially forces players to check out the in-game resources for more in-depth explanations. Thankfully, the game features tons of difficult customization options that can be changed on the fly, so those who are only interested in seeing the story's conclusion can do so with ease by turning off Critical Hits, making enemies weaker, and so on. There's so much flexibility in this customization system that all players have the chance to tailor the experience to their taste. 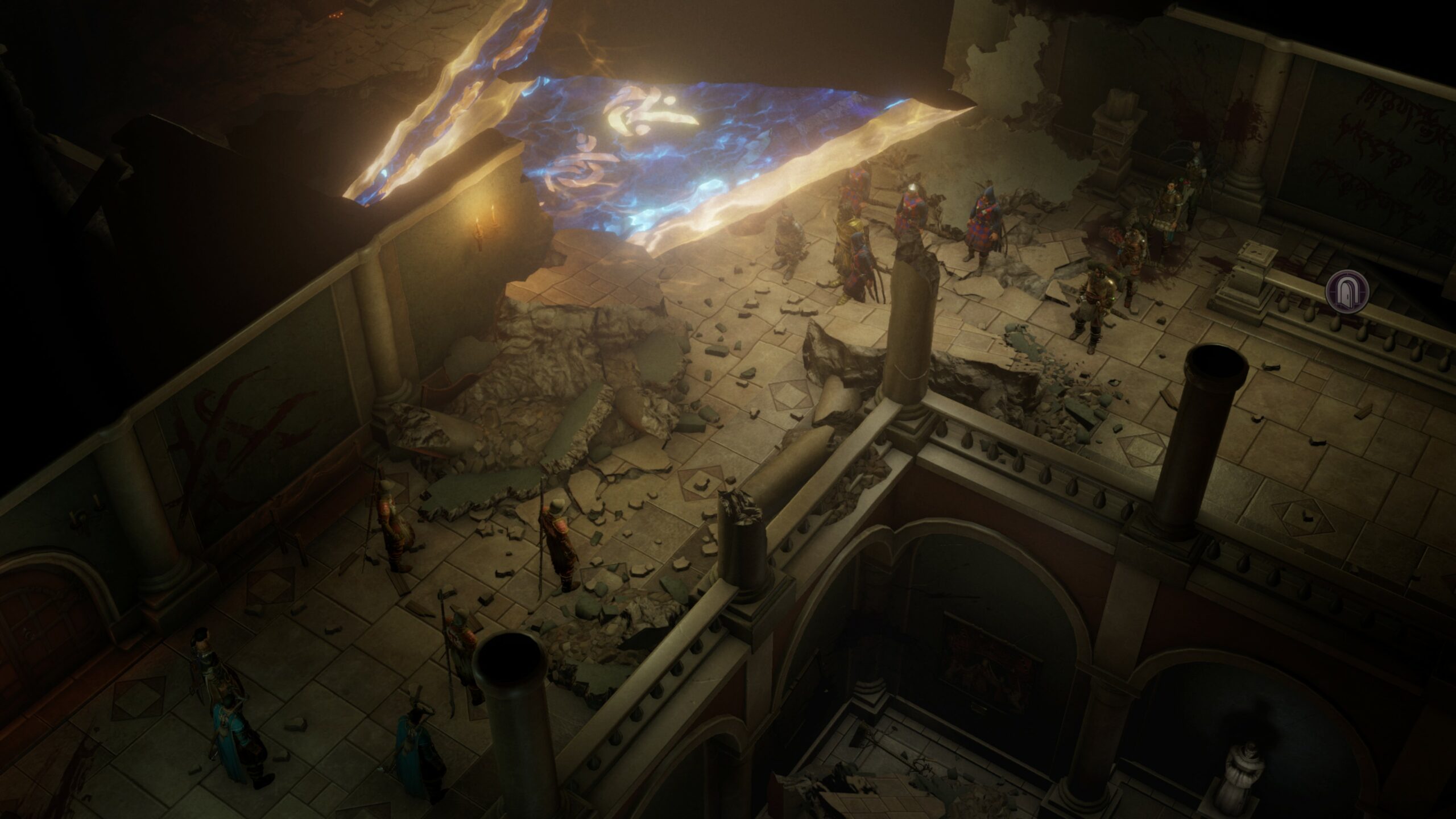 Even with all of its additions, Pathfinder: Wrath of the Righteous plays like a classic top-down RPG, and it definitely looks the part. This doesn't mean that the game doesn't look good, as locations and characters look detailed enough, spell effects look flashy and some of the biggest character models used for the demon lords look rather intimidating.  Pathfinder: Wrath of the Righteous may not be the best-looking game, but it makes up for that with its amazing atmosphere.

Being an undemanding game, Pathfinder: Wrath of the Righteous will run decently on pretty much every system from the past 10 or so years. The machine used for the test, powered by an i7-10700 CPU, RTX 3070 GPU, and 16 GB RAM, had no trouble running the game at 4K resolution with everything maxed out. Not too surprising, consider the developer recommends an i7-920 CPU and GTX 1050 Ti GPU.

At the end of the day, Pathfinder: Wrath of the Righteous is a massive RPG that all fans of the genre will love to death with its great writing and gameplay depth, which goes beyond that of its predecessor and most of the other games on the market. Despite the team's best effort, however, the game's depth can be intimidating, so newcomers may have some trouble during the first few hours of the game. However, those who persevere will find an experience that can keep them engaged for a very long time.

Pathfinder: Wrath of the Righteous is a faithful adaptation of the tabletop RPG, featuring an engaging story, well-written characters, and extremely deep gameplay mechanics. Although Owlcat Games' did their best to make the game feel welcoming to newcomers with plenty of in-game resources and tutorials, and difficulty customization options, the depth of the experience can be intimidating. Those who brave through the initial confusion, however, will find one of the best computer RPGs released in recent times.