Ah Paper Mario – the plumber’s two-dimensional counterpart has had it rough lately, he’s always being moaned at by people who played Paper Mario: The Thousand Year Door because they want him to actually be in a really good game again, instead of the acceptable Super Paper Mario and the widely criticized, Sticker Star. Oh, and the less said about Paper Jam Bros., the better…

But now he’s back, in High Definition, and he’s one of the very last games to launch for Nintendo’s solemn Wii U, a console that’s looking at its dying days. So dying console, dying series, right? A somber thank you to everyone that purchased a Wii U, a gift of yet another mediocre Paper Mario game. Well, that would be true, if Paper Mario: Color Splash were mediocre – because it’s actually really very good.

Paper Mario: Color Splash opens in typical Mario fashion – whisked away on a boat to a new location – Port Prisma – Mario, Peach and the usual assortment of colored Toads find the port town to be in disarray after an attack from – gasp shock horror – Bowser, the Koopa King. The Paint Stars have been ripped from their paint fountain thing, and strewn across the land, and it's up to Mario to gather them up and save everyone. Because of course it is.

A key new mechanic in Paper Mario: Color Splash is Paint. Paint is used to color in blank spots in the game world, which always rewards you with coins, cards and more paint. Colorless spots tend to break machinery, or even pause waterfalls in time, so recoloring the world around you will open up new areas and items, in addition to making the place look nicer. It’s the opposite of what Mario was tasked with in Super Mario Sunshine, basically. Paint can be used to just fill in the world around you, but can also return life to colorless Toads (are they dead when blank, or just sleeping…?), or even color blank Battle Cards to make their effects more powerful. 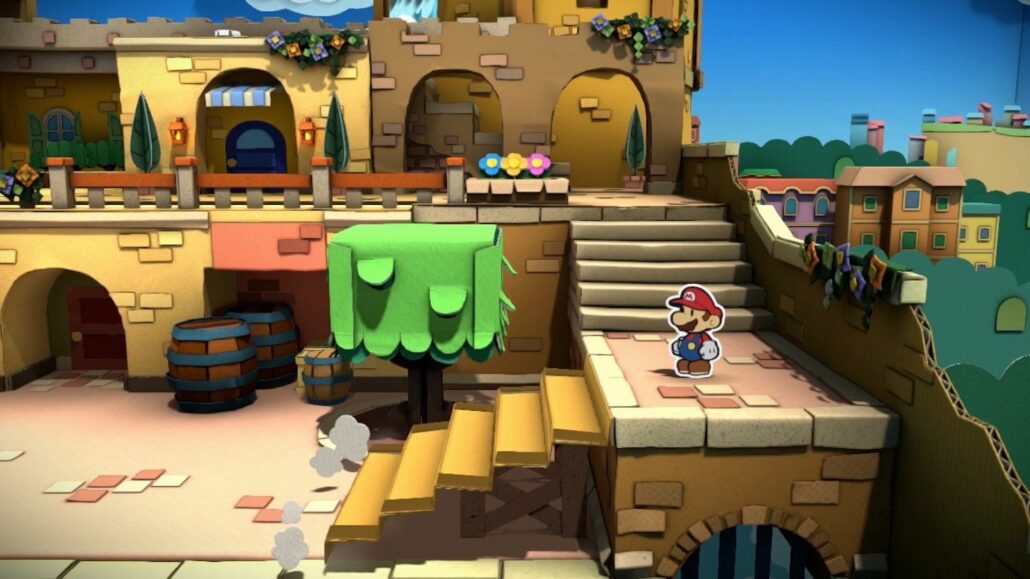 Paper Mario’s dev team have always seemed indecisive about their battle system – and what we have here in Color Splash is most reminiscent of Sticker Star. You have a selection of Battle Cards, which you can pick up or purchase, and they dictate which moves you will use in battle, such as jumping on your enemy, using a hammer, and essentially variations on those two, with varying types of jumps and hammers to use. As many issues as I can find with this system – and believe me, I have a handful of gripes – I actually think it works quite well. You can even turn 3D objects found in the world or enemies themselves in to Battle Cards, allowing you to summon them in battle for a one-off attack.

The issues with this battle system are numerous though. For one, there’s no good way to organize what will inevitably become a screen filled with dozens of basic Jump attack cards – because why wouldn’t you have a surplus? In addition to that, too many tasks are given to the player in order to perform a simple attack. Select your card, press confirm, color your card, press confirm, flick your cards towards your opponent – it’s nonsense that this many interactions are required for what used to be a single press of the A button.

But chief of all of Paper Mario: Color Splash’s battle system crimes is making battles somewhat worthless. EXP, in the traditional sense, is gone, replaced with collectible Hammers which will eventually increase the amount of Paint you can hold at any one time, which is nice, but the paint is so plentiful that you’re unlikely to run out very often after just a few upgrades. The other bonus you can get from battles is money, which in this game is essentially used for little more than more battle cards – and money is so plentiful in this game, with a variety of ways to get quick cash, it feels pointless actually engaging in battles, and I often found myself dodging enemies and bee-lining directly for bosses and paint stars.

But as much as I love to moan and gripe, Paper Mario: Color Splash is actually a load of fun. Each of the areas in the game is fun to explore, and despite the fact that it should feel like a chore, finding and painting colorless spots is fun to the end. The areas to explore look lovely and the papercraft style of the world has never been so vivid. It’s vibrant, cheerful, somewhat simple, but always endearing and enjoyable.

Paper Mario: Color Splash is the Wii U game you shouldn’t write off. Though it has issues, its fun, funny and looks excellent. If you’re looking for a lighthearted, casual RPG-style experience then look no further, this is the best Paper Mario game in years.