Nintendo Switch (also available on PC, Xbox One and PlayStation 4)

When it comes to free to play games, it's normal to not expect much. Usually when going into one of those experience you prepare yourself for low amounts of content, low levels of polish, just generally an experience that screams "you get what you pay for."

Paladins, though, is different. Playing Paladins, I feel like it's a premium experience. Using a variety of characters and their abilities offers different gameplay each match, and although there is currently a lack of maps and modes to play on, what's here is really fun to dive into and master.

Though, it is a free to play game after all. There is bound to be a few cutbacks or incentives to pay money. In Paladins, it's the characters. You certainly don't start the game with a massive roster, though you do get to see what's available. You can cough up for a Founder's Pack, which will give you pretty much every character, and you'll have an incredibly good ride, though earning gold to unlock characters - which, actually, only takes a few hours of playtime each - is a progression system in itself, and a very rewarding one at that.

If you're not all that familiar with Paladins, you might've heard of it being called an "Overwatch clone". Well, there are definitely similarities between the two, with Paladins being another stylised online shooter, but with the varied casts of characters in each game, there were bound to be similarities, and the pair have quite neatly carved out their own niches and audiences.

In Paladins the range of characters will change up every game of you play, thanks to unique abilities and special attacks that charge over time. You can use larger characters which tank damage, more nimble damage focused characters, and of course, healers. It certainly takes a thing or two from the school or Team Fortress 2, just as Overwatch does, encouraging a variety of class types in a team to ensure victory, especially in challenge oriented modes.

Deathmatch is the most straightforward mode available to you, where you simply, well, kill the other players to win. Not exactly a revelatory game mode, eh? But that's not an issue, for although the game is as straightforward as the shooters you've come to love already, as said before, it still feels distinct. Siege mode certainly takes on a life of its own, where the Paladins' abilities come into use more than ever, and it's a great display of how interesting and unique the game can be. At least, it would be. Unfortunately, in practice, I found the Siege mode - where you capture a point and push a payload, which will be familiar to a lot of shooter fans - just felt long and repetitive.

Of course, there were fantastic moments too. Play of the game-style highlights, easily captured and shared through the Switch's capture button. Moments where I deftly shot and killed the entire enemy team before dodging away as Cassie, my personal favorite damage dealer. It felt good to be in control of a situation, or take control of a situation back. Though that didn't stop me from feeling like Siege mode was a frustrating game of back and forth. Yes, I know, pushing a payload is essentially a game of tug of war, so that's the point. But I'm not sure being boring was an intended part of the experience either.

Paladins has been, for me, a game of two halves. On the one side, I have an online shooter that I'm having a surprising amount of fun with, recommending it to my friends. On the other hand, I've had far too many instances of crashes, long load times and just frustrating gameplay moments. And I wish that wasn't the case.

I managed to find what I assume to be a bug, where I spammed emotes during the setup phase of a Siege match, and my Switch would crash to the menu. I did this a couple of times, and yep, crashed in that same instance at least twice. The game does put you back into your last game if it's still going and you were disconnected, but a long initial load makes it feel like too much time was lost to make it worthwhile. In addition to that, I had to wait over five full minutes while matchmaking for a Siege game, because each time a game of ten people had been found, one of them wouldn't connect or confirm. It's yet another complaint that I simply don't want to have to mention, but it was a real problem in my time with the game.

When it comes to multiplayer games on the Switch, I want to be able to drop in and drop out as quickly and easily as possible, and long load times and awkward matchmaking make that so much harder with Paladins on Switch. But as I said, this is a game of two halves. The other half of this is that I was sat in an airport for hours on end and nothing to abate my boredom but a Nintendo Switch, and Paladins was, shockingly, great on airport WiFi, keeping me relatively entertained for a long time. A console quality shooter that I can take with me and play on cheap airport WiFi? That is a wonderful thing.

So even though I can find Paladins frustrating at points, and it certainly isn't my favorite shooter - not even on Switch - it's really good, and hard not to recommend. After all, it's free. There's nothing to really hold you back from putting the game on, playing a few times, and then uninstalling if it's not for you. But if you're the type to do a fair amount of traveling or have a hankering for an online shooter when not at home, Paladins is a pretty great option, and runs great on Nintendo Switch, despite a few obvious resolution dips in handheld mode.

Review code provided by the publisher. The game's Founder's Pack is available for $29.99, though the free-to-play version will be available later this year on the Nintendo Switch. 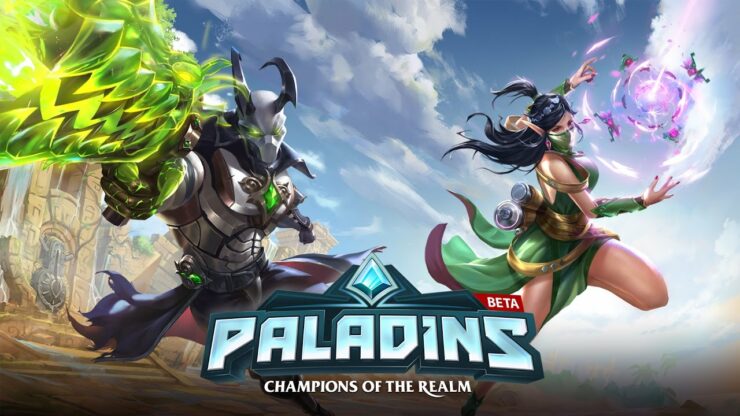 Paladins is one of the best free to play games available, and nothing changes that on Nintendo Switch. If you're looking for an online shooter to either take seriously or just play casually, Paladins is a great option that you can take on the go. Only a few technical issues drag it down from being great.