It's hard not to fall in love with Ori and the Will of the Wisps. Even the title screen and its beautiful vista and haunting opening music, Ori will entice you in. But behind the aesthetics and the heartbreaking/warming narrative, there’s something unexpected for those that haven’t played its predecessor; there’s also an incredible platforming game as well.

Ori and the Will of the Wisps is the sequel to the 2015 Xbox One game, Ori and the Blind Forest that let players explore the birth of Ori, a small woodland spirit separated from its spiritual home. It was a game that deliberately, surgically broke your heart at the very beginning and it feels like some people were put off by that overt display of emotion. If anyone was, they missed out on one of the best platformers (which got our community's Best Platform Game of the Decade award), and probably will again.

Will of the Wisps takes Ori to a new forest in search of his missing friend and discovers the fate of this poor plagued land. There is something tragic embedded deep in the DNA of Ori. Behind its dazzling colours and cutesy feel, there is an old school fairytale filled with sadness. But rather than just be a game that tries to break your heart, Will of the Wisps actually tells a remarkably interesting story, which makes the tragedy even more effecting.

The story is far more expanded in Will of the Wisps, one of many improvements the developers at Moon Studios have made in the sequel. On top of your quest to find your friend, there are also dozens of side quests and fellow adventurers you’ll meet as you explore the island. Some of these quests are simply pointing the way to the game's various collectibles, giving you clues of the areas to explore. Others offer you the chance to explore areas of the world that are not on your main quest path, which is a reward in and of itself but also lets you speak to some of the characters. The dialogue is simple, but it does a fantastic job of expressing the feel of the characters and really reinforces the tone of the surroundings.

And the level design in Will of Wisps is just as good, if not better than the Blind Forest. At first glance, it might appear like you have nothing but the generic level templates to explore: water zone, desert, ice zone, etc but Will of Wisps has an incredibly unique and beautiful design that makes every single one of them feel fresh. Transitioning from the dense foliage of the forest to the sublime blues of the water is breath-taking and so perfectly captures that paradise the game wants you to picture. The opposite is also true, traveling into the Silent Woods and discovers a field of petrified giant owls is haunting and bleak, and the game captures that mood perfectly as well. Each area is stuffed with collectibles but honestly, you don’t need a reason to explore the island, though you might need to wait before you can delve into every nook and cranny.

Ori and the Will of the Wisps, at its heart, is a Metroidvania game, which means you’ll find a lot of the island closed to you until you unlock the abilities needed to traverse its many challenges. Some games of this type get the balancing wrong, waiting too long to unlock the relevant skill and accidentally allowing the player to forget where they are headed. Will of the Wisps does not have that problem. In fact, the steady pace at which you unlock new abilities, each letting you explore the previous zones just a little more is near perfect. And while you don’t start with anything, you have enough time to get to master each ability that you never feel overwhelmed, even when the game is demanding the most from you. 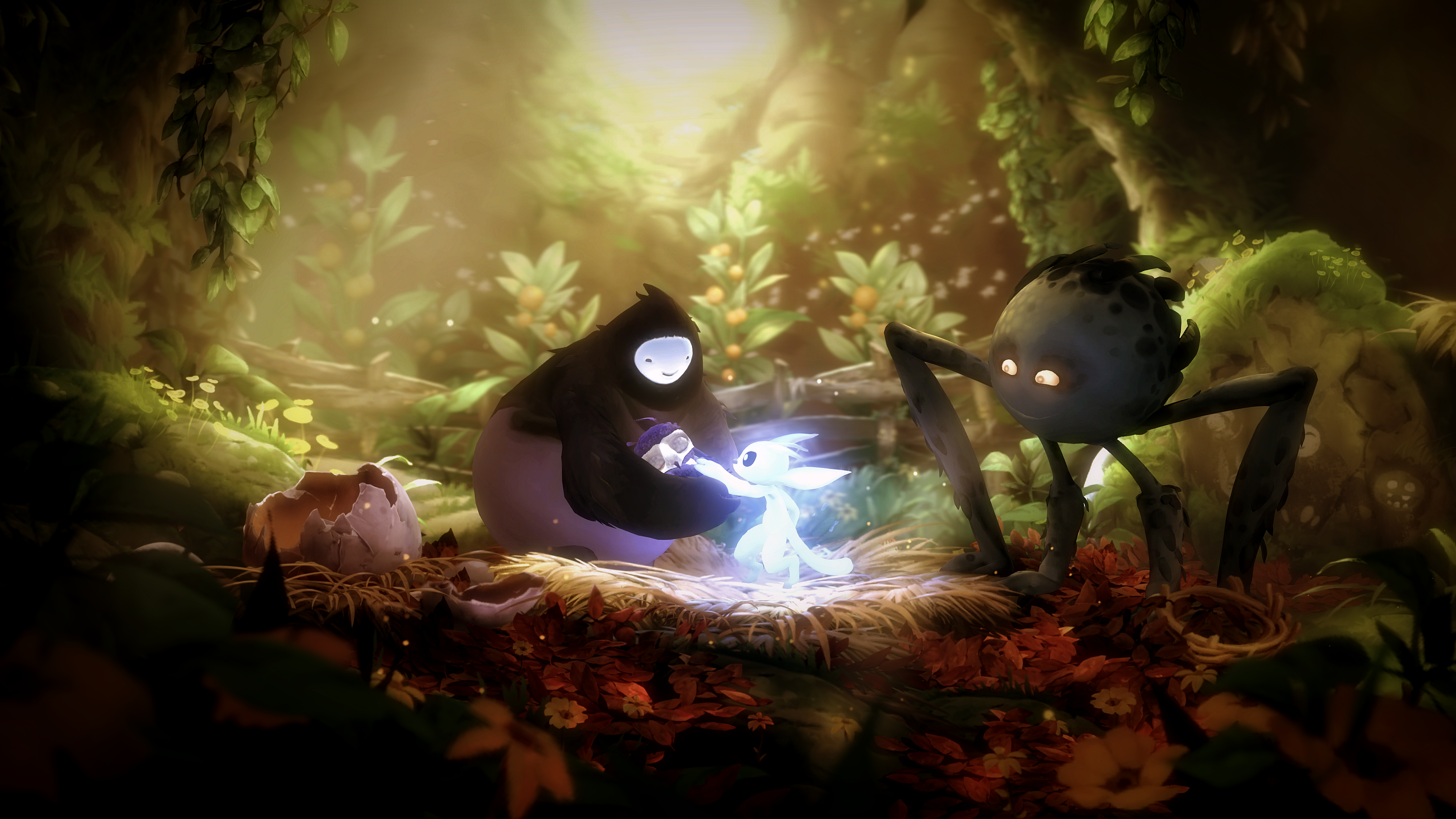 And some of these levels can be quite challenging. The bright colours might appeal to a younger audience but Will of the Wisps is not always so easy. There is no real consequence for death, but regardless some sections are harder than others, especially the boss battles. Combat in Will of Wisps has been greatly improved over Blind Forest, and you’re free to experiment with different combinations and upgrade them however you wish. While the sword and bow are good staples you’ll find an unusual arsenal of abilities to play with. But despite its improvement, some of the boss battles still feel a little out of place in Will of Wisps. While the chase sequences force you to use everything the game has taught you, the actual boss battles often fall back on button mashing and a bit of luck. One missable ability allows Ori to heal himself and I would highly recommend seeking it out before entering any of the later boss battles.

The final level in Ori and the Will of the Wisps was something of a letdown, though. Having acquired everything you need to navigate the island, you are sent to the most dangerous location. But rather than being a feat of heroic platforming for you to overcome, most of the level appears void and forces you to explore only through trial and error, slowly eking out the safe route. While the rest of the game was so beautifully designed to make sure you could always see what it was you had to do, the final gauntlet felt underwhelming.

And unfortunately, when I played this game for review on both the Xbox One and PC, there were some bugs. Most of them were harmless, some audio feedback or frame rate dropping as the game first loaded, but I did also encounter a game-breaking bug towards the end that forced me to quit the game and start again. While the developers are promising fixes and I’m sure they’ll come, they did happen during this review.

Despite all that, I am still totally in love with Will of Wisps. It is an incredibly satisfying experience as your skills and abilities grow steadily. It is a monument to the artistic and musical talent in the games industry, and it is another emotional story from Moon Studios that will have you genuinely empathising with the silent characters as they struggle with despair, grief and the faltering of hope. Ori and the Will of the Wisps is a fantastic game from start to finish, even if it isn’t quite a perfect one.

Reviewed on Xbox One and PC (code provided by the publisher).

Ori and the Will of Wisps is a truly delightful and devastating game that blends new ideas into a solid foundation, all topped off with an incredible score and even more breathtaking levels to explore.