Oceanhorn 2: Knights of the Lost Realm

Oceanhorn 2: Knights of the Lost Realm is not afraid to wear its heart on its sleeve. It knows it is heavily inspired by classic The Legend of Zelda games, and it wants you to know that too. It follows a young boy who leaves his home village and ends up traveling across the world to collect three themed emblems to quash an evil threat. This game is the epitome of games inspired by The Legend of Zelda - then the only question that remains is if it holds up to the series it takes so much inspiration from.

Once Oceanhorn 2: Knights of the Lost Realm kicks off you find yourself moving across a large overworld, solving puzzles and flipping switches in order to make your way through the world and do away with whatever looming evil threatens all that is good and just. You're first big location is White City, and it's impressive in size, but fairly small in terms of things actually worth taking a look at - which is, unfortunately, the story for most of Oceanhorn 2's locations. You'll soon meet the entirely suspicious leader of White City and set off on your quest to find the three McGuffins.

Zelda: Breath of The Wild Explorer’s Edition and a Link-Green 2DS Launching on Black Friday

If you've played a 3D Zelda game other than Breath of the Wild, you know what to expect. First, you'll go into the jungle to meet the Owru tribe - they're basically owl-people - and you'll be slashing through a variety of enemies before approaching the beacon, which essentially turns the game into a traditional Zelda dungeon. Only, the whole game is, pretty much, a Zelda dungeon. The overworld is just there to walk through - and is largely pointless aside from one or two side areas you can discover - but once you get to the larger outdoor areas, such as the Owru Jungle, it just turns into an open-plan Zelda dungeon. You still have to get to a specific point, and on the way, you'll be gathering items and flipping switches in order to open the path forward. 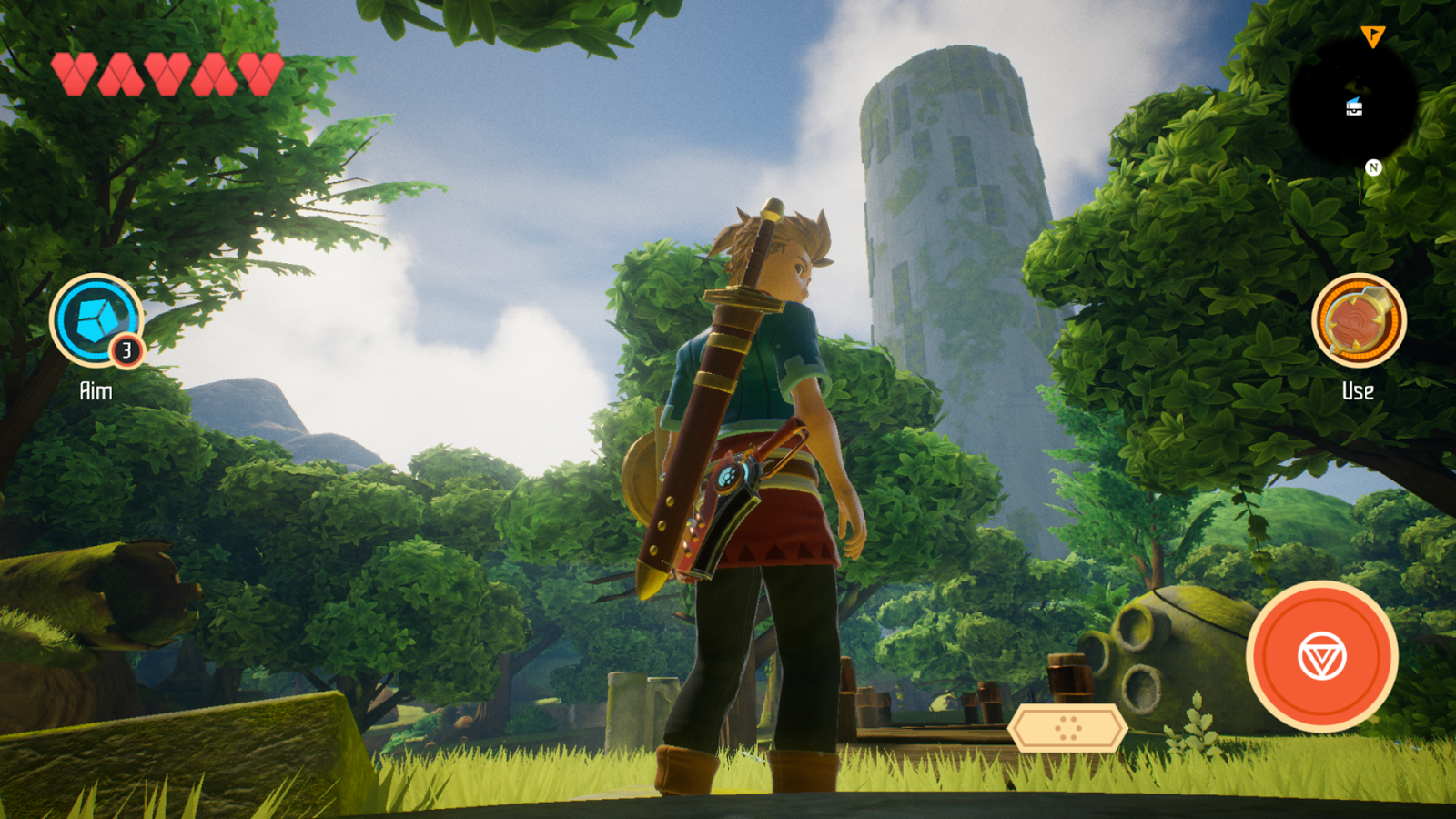 It's not all that bad in concept, but in practice, Oceanhorn 2 becomes fairly tedious fairly quickly. The problem is that most of the puzzles aren't particularly difficult or engaging, and they just feel like arbitrary roadblocks to progression instead of something inspired. While playing Oceanhorn 2 I never truly had that "aha!" moment, that sense of accomplishment after discovering the solution forward. Instead I usually just had to stand in a different location while shooting targets with my spells. There are a few nice uses of the elemental spells you cast with your gun, such as freezing water to make a platform before floating off to a distant island, but these moments don't happen often enough, and in combat, the caster gun is, unfortunately, mostly useless.

Combat, on the whole, is just a little bit underwhelming. You have a three-hit combo, and the final hit of the combo will be a stronger strike with a high critical chance. You can use this to flip some enemies, like early beetles with a wear underbelly, but most of the time you'll be just be using it for damage. And when it comes to bigger fights, well, you clear out numerous enemies with bombs, and simply hit and run larger enemies repeatedly - they are almost always slow.

The game feels as if it's trying a lot harder during the large boss encounters. Bosses are huge, and you'll often be using the environment to your advantage to take them down. It uses the Zelda formula, again, so you'll often be beating down bosses with whatever tools you collected in their respective dungeon, and while these fights aren't particularly difficult or inspired (use a grappling hook to fight a big bird, flip a turtle to do damage to the weak point, etc.), they are very fun, and finishing them off was when I felt most comfortable playing Oceanhorn 2. 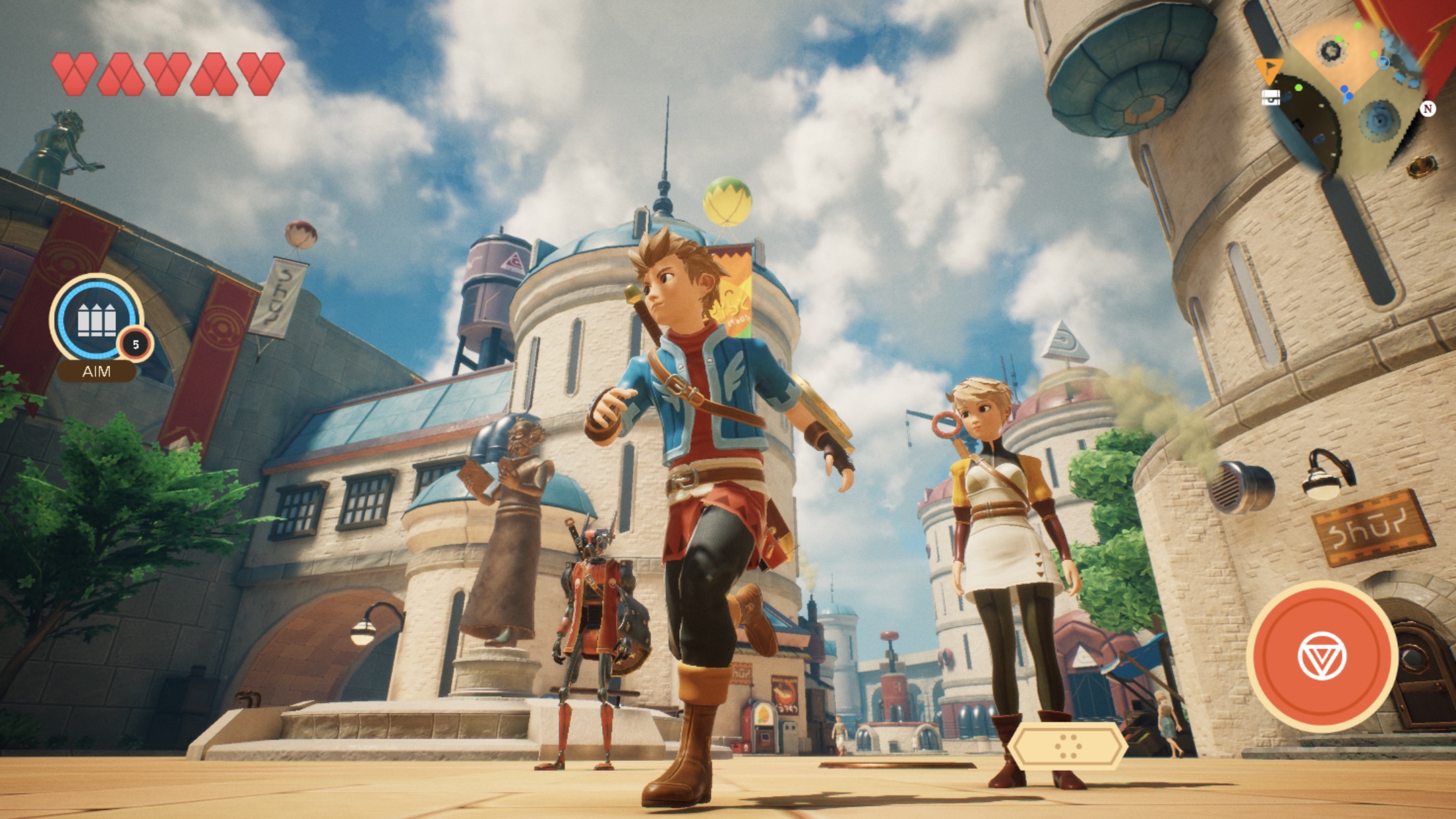 Some of the areas in Oceanhorn 2 did look genuinely lovely and made me want to explore them, but most of the time when I did I wound up disappointed. This is not aided by the fact that in Oceanhorn 2, all of the treasure chests that do not contain key items or not-heart containers, simply have coins. Bundles of coins. If you explore in this game you will be rich, and if you do not you'll still probably have more than enough money anyway. You do find "treasure" but this treasure is automatically converted into coins, and you can basically only buy more ammo and health, which you can just get from cutting grass and bushes.

The problem is that Oceanhorn 2 has taken all of the traditional Zelda conventions, built a game around them, and then called it a day. There's nothing wrong with Oceanhorn 2, it's not a particularly bad game, but it's certainly uninspired and iterative. To give credit where credit is due, the world the team has crafted is really lovely, and I really like the Steampunk-meets-magic vibe they've gone with to blend in the likes of planes, trains, and guns in with the traditional setting. That said, the fact that the game winds up pulling a *spoiler alert* cliffhanger ending with the bad guy maybe not being so bad just feels… bad. It doesn't feel satisfying as a player, and the promise of getting some kind of conclusion in Oceanhorn 3 doesn't help. Even the final third of the game feels rushed, with a final boss which is far less impressive or enjoyable to fight against than all of the others.

Oceanhorn 2: Knights of the Lost Realm isn't a bad game by any stretch of the imagination, but it does feel like it's lacking something. This is a Zelda-like through and through, and if you want some traditional Zelda action, it's not a bad game to play. But due to being so rote, it's unlikely to stay in your mind for long once you're done.