There are two major contenders in the global smartphone arena that are making waves with their products. Apple and Samsung. The iPhone 5 and the Galaxy S 3 are the two most sought after phones of this year, and their predecessors have held the same spot in years that have long gone. Surely these are not the only two manufacturers out there, but others seem to have blended in the background whereas these market titans have been ruling the foreground for quite some time now. 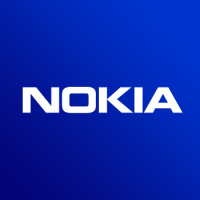 Nokia, the once mighty smartphone manufacturer, joined forces with Microsoft last year. This partnership would see the Finnish smartphone giant offer its expertise in hardware to be combined with the software savvy Redmond based giant, Microsoft. The result of this partnership was the Lumia range of smartphones. Today we're going to review the Nokia Lumia 900, the top of the line smartphone in this range, in great detail. 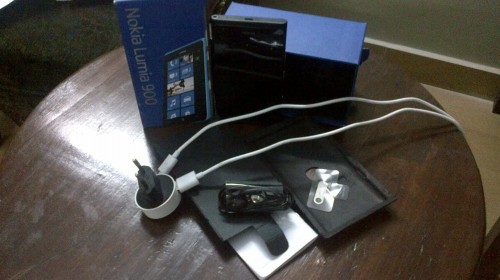 On the outside, the box has Lumia branding ad on the top it has an image of the device itself. Slide it out and you are greeted by the Lumia 900. Take it out of the box and underneath it you can find the SIM door key. Lift the little plastic tray and find a little box which contains relevant documentation. Take that out as well and finally you find the earphones and the charger. That's about it for what's in the box of Nokia Lumia 900. 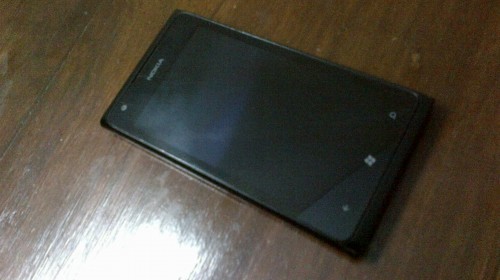 The Nokia Lumia 900 is 128mm in height, 69mm in width and 12mm in depth. To put things in perspective, its rival iPhone 4S is 115.2mm in height, 58.66mm in width and just 9.3 mm in depth. These numbers clearly show that the Lumia 900 is not the thinnest smartphone around. However it has been designed in such a way that it does not feel bulky and neither does it feel uneasy to hold it in your palm or carry it in your pocket. Surely the increase in height and width can be attributed to the 4.3 inch display on Lumia 900 as opposed to the 3.5 inch display on iPhone 4S. The one piece body is made out of polycarbonate which gives a great feel of the exceptional build quality. 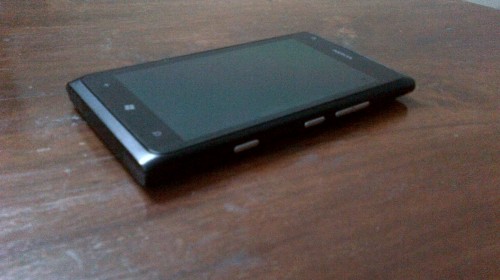 On the right there is a volume rocker up top followed by a power key in the middle. The power key is used for the obvious function of powering the Nokia Lumia 900 ON and OFF, as well as waking it up from standby mode. Further down there's a camera key, which when pressed fires up the camera and takes a picture when pressed the second time. There are no buttons on the left side of the device. 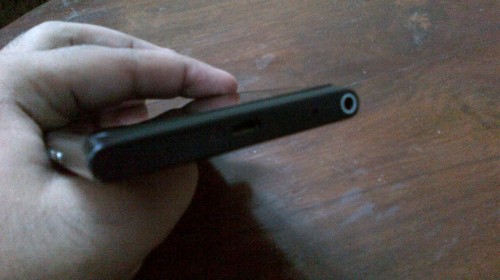 At the top, the Lumia 900 houses a 3.5mm headset jack accompanied by a micro-USB port for charging and data transfer needs. Right next to it the the micro-SIM slot. The bottom houses a speaker grill and relevant certification details. 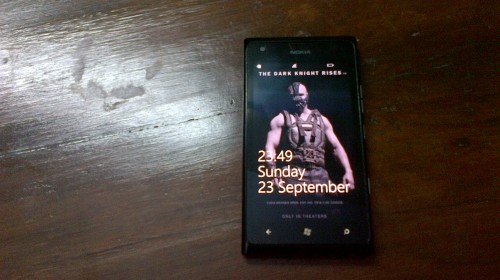 The front boasts a gorgeous 4.3 inch display as well as the front facing camera. There is also the back key, the Windows key in the center which brings up the main menu and a search key which fires up Bing whenever the key is tapped. Microsoft Tellme can be prompted by pressing and holding the Windows key. 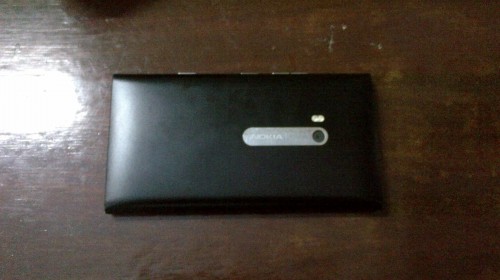 On the back there's a Nokia logo followed by the 8 megapixel back camera. All this is accompanied by the dual-LED flash. While the back itself is immune, the little strip you see in the middle is quite susceptible to scratches.

The design rivals that of some of the best smartphones out there by Apple, Samsung, HTC, Motorola etc. The one piece polycarbonate construction feels pretty sturdy, strong and doesn't feel like it would break in a million pieces were you to drop it. The buttons have a nice feel to them as well. The Nokia Lumia 900 has an impressive design to say the least, but that's not all that makes up a great smartphone. 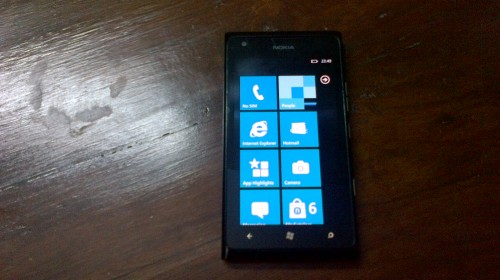 This Nokia Lumia 900 review won't be complete without a special mention of the display. The 900 has a gorgeous 4.3 inch 480x800 px ClearBlack AMOLED capacitive touchscreen display with 217 pixels per square inch. It has been fashioned out of Gorilla Glass, meaning that the display is quite strong, won't break easily if dropped and is not susceptible to scratching. 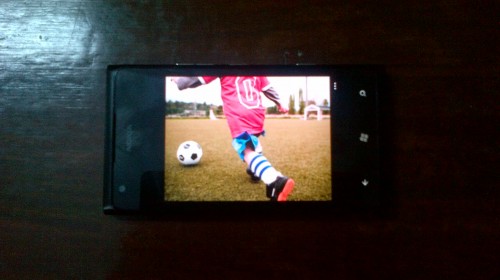 The colors are clear and crisp, even in low light conditions as well as with brightness turned all the way down. The Lumia 900 display can be read quite easily under direct sunlight. The 4.3 inch size is just perfect for a smartphone of this form factor. The colors are bright, vivid with appropriate contrast. Viewing angles are also pretty good. The touchscreen itself is pretty responsive and intuitive. Multitouch gestures work like a breeze. So the Lumia 900 display earns the smartphone extra brownie points. 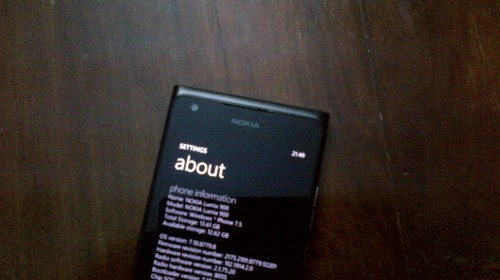 The Nokia Lumia 900 boasts the 1.4GHz Qualcomm Snapdragon Scorpion processor coupled with 512MB of RAM. Graphics on this smartphone are aided by the Adreno 205 GPU. There is plenty of processing power to support Windows Phone 7.5 and its various features.

During usage, we did not find the device lagging when high memory consuming apps were being run. Though it would have been a lot better if the RAM had been bumped up to 1GB instead of 512MB. No lag was experienced in gestures such as pinch to zoom. The apps open up fairly quickly and run without any glitches. Everything is pretty zip and zap including web browsing on Internet Explorer. Adreno 205 GPU ensures that plenty of power is available for gaming. A wide variety of games are available for Lumia 900 from the Marketplace. Gaming is a breeze on this device, partly because the hardware is perfectly capable of this task. 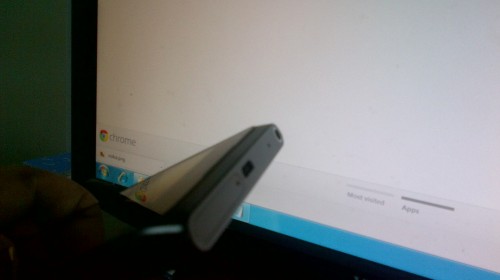 The Nokia Lumia 900 certainly does not lack in the connectivity department. It has the conventional connectivity options that you would find on most smartphones today.

There's microUSB v2.0 support. Bluetooth 2.1 support with A2DP and EDR, Wi-Fi 802.11 b/g/n, GPRS/EDGE Class 33 and HSDPA with speeds up to 42 Mbps. A standard 3.5 mm headset jack is also present. It would have been amazing if the Lumia 900 had a HDMI port, but unfortunately it doesn't. There's 16 gigabytes of internet storage that is plentiful for your music, movies, pictures and other content. 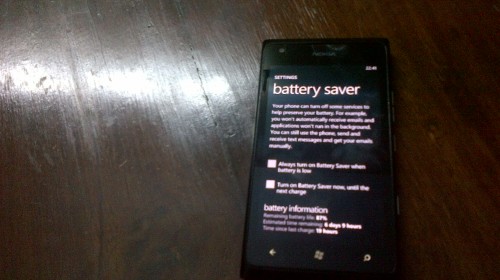 With hardware such as mentioned above and various power hungry features, one can expect Nokia Lumia 900 to lack in the battery department. While it doesn't lack in this particular department, it doesn't exactly excel either. It is kind of stuck in the middle, with the battery life not being too amazing or too bad.

This smartphone comes with a Li-Ion 1830 mAh battery which can not be removed from the device. Official figures from Nokia state that the battery is good for up to 300 hours of standby, 7 hours of talk time and up to 60 hours of music play. During testing, we found the talk time to linger between 5 and 6 hours. Continued Wi-Fi usage coupled with a weak cell reception can decrease the posted standby time. Nevertheless, a full charge can easily get you through the day, even if you choose to play music, surf the web, take pictures and what not. 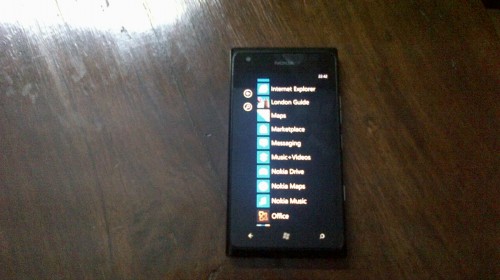 The home screen features Microsoft's signature live tiles. This is probably one of the best things about this platform. Its quite different from Android and iOS in the way it presents itself. Swiping left on the home screen will reveal the full list of apps. The Lumia 900 comes with a couple of apps developed by Nokia, namely: Nokia Drive, Nokia Maps and Nokia Music. Since the software is from Microsoft, it comes with the obligatory Bing Maps, Zune Music & Videos, Internet Explorer, Hotmail and Microsoft Office apps.

Windows Phone 7.5 Mango is actually quite impressive. Its easy to use and its very easy on the eyes. To a user switching over from iOS or Android the software may seem a bit hard to get around in the start, but once you get a hold of it, it's actually quite user friendly. In my personal opinion, the software on its own earns Lumia some extra points. 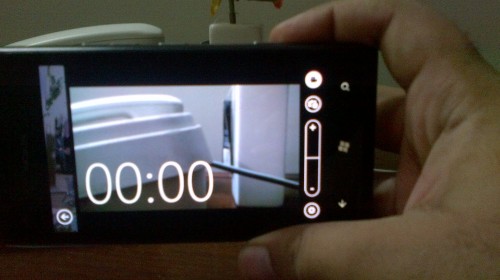 The Lumia 900 boasts an impressive 8 megapixel back camera, (3264x2448 pixels) with Carl Zeiss optics capable of recording 720p videos at 30 frames-per-second. The back camera has dual-LED flash and autofocus. There is also a 1 megapixel front camera for video calling. Cameras have always been a strong frontier for Nokia and its partnership in this regard with Carl Zeiss has paid off at numerous occasions.

The camera quality is simply amazing and the camera app has a number of features and modes that can be used to enhance the quality of pictures being taken with the device. Dual-LED flash ensures that the pictures come out great even in low light conditions. Autofocus is an added advantage and greatly improves the quality of pictures. The images have a widescreen resolution of 3264x2448 pixels and are a joy to look at.

The one megapixel front facing camera can be used for video calling over Wi-Fi by using services such as Tango, Google Plus, Google Talk etc. Self shots can also be taken through the front facing camera. The back camera is capable of recording crisp and clear 720p video at 30fps. Simply put, the cameras on Lumia 900 are amazing.

By now, you have read everything we have to say about Nokia Lumia 900. Its a good device, if not a great one. The software is amazing, easy to use and intuitive. The device itself has been exquisitely fashioned and the unibody construction touts premium build quality. Gorilla Glass ensures that your display goes unscathed even in the toughest of usage conditions. There are plenty of connectivity options and there is heaps of internal storage for all of your content related needs. The camera is simply superb and lives up to its expectations. It would have been wonderful had the RAM been upgraded to 1GB, but the current 512MB one does the device justice in every respect. In the end of this Nokia Lumia 900 review, we can conclude that it is a good device. If you're willing to try out something new, take a break from the monotony of Android or iOS, then this device and the software that powers it, is definitely for you. It has all the characteristics of a powerful smartphone.