Nintendo have been no strangers to rolling the dice since the DS unveiling – Nintendo’s revolutionary touch screen implementation, coupled with the Wii’s game-changing motion controls impacted the consumer gadget landscape as a whole, as both of these features are commonplace in almost all smart devices – especially our phones. With the Nintendo Switch, the Japanese gaming giants are once again releasing a device they hope will come everywhere with use just like our Game Boys once did. But is the gaming tablet-console up to scratch, or will it get left behind like the Wii U before it?

Last time we talked about the console itself, design and comfort. This time it’s all about how it feels to play games, on the television and in your hands.

When playing The Legend of Zelda: Breath of the Wild on the TV, it’s easy to forget what the Switch even is. While holding the Nintendo Switch Pro Controller, you could mistake it for any other console. At 900p Breath of the Wild looks just as crisp as most other console games, and its beautiful use of art direction easily masks any jaggies. But when you look below the television you see this tablet sitting in a dock. When sat next to a PS4 Pro or even Wii, it’s diminutive size makes it hard to believe it is even capable of running such a good-looking game.

But that feeling of disbelief is reinforced when lifting the Switch from the dock – taking it by the JoyCon and lifting the Switch brings the game to life on the screen – possibly prompting you to press a button on your desired controller if you weren’t using the JoyCon already. This is truly a seamless experience, the game does not pause, nor load, nor interrupt in any way. You can begin playing the second your eyes adjust to the screen.

And playing the Switch anywhere is truly liberating. Having the Wii U tether me to a room was a constant frustration, while with the Switch the ease at which you can lift and walk with the device feels miraculous. And portability is actually viable – without JoyCon attached, the Switch can easily fit into the pockets of most adults, letting you easily slide it into bags or even put it in your back pocket with the JoyCon in another – though in reality, you’ll probably want a hard case to prevent any potential damage.

While in handheld mode the Switch is fantastic, in tabletop mode there’s less to be celebrated. Up close to your face the Switch’s screen looks crisp and beautiful even at 720p – that PPI really is remarkable. However, as soon as it’s a few feet away from your face, things start to get a little… Small. Indeed, the 6.2” screen might be beautiful a few inches away from your face, but at a couple of feet things start getting a little squinty. Ultimately, the screen is just too small to regularly be used as a small TV replacement to be propped on a desk – unless you want to hunch over the device. Honestly, unless you’re playing multiplayer, like 1-2-Switch or the upcoming Mario Kart 8 Deluxe, you’re best off using it in handheld mode, or on the TV.

Another surprise with the device is the thermals – particularly, how cool it actually is given the games it can run. The Legend of Zelda: Breath of the Wild is likely a game that pushes the system to its limits, and yet in handheld mode the device remains suspiciously cool. For comparison, my Samsung Galaxy S6 smartphone has definitely gotten much hotter while either charging or running Gear VR in the past. The Switch remains definitely warm, but never worryingly so. In docked mode the temperatures certainly heat up – removing the Switch from the Dock after several hours of play reveals a very warm device indeed, but still not uncomfortably so.

If you wanted to remove the Switch from the dock after several hours of play and continue playing, that’s easily done, especially as the JoyCon stay cool even while attached to the system. And the system will, in fact, continue to cool in handheld mode. After less than ten minutes of play in handheld mode the system will be noticeably cooler – the handheld mode’s lower GPU clock clearly keeping things in check well. And to add to all of this, the device’s fan is never audible with any kind of background noise, handheld or docked. In handheld mode, headphones or game audio – even on its lowest setting – will completely mask fan noise. In docked mode, I never heard a single peep, and even when it had been docked and running games for hours, I had to put the device to my ear to hear it – the slight whirring of the fan inside. Hopefully the console always stays this silent and doesn’t become audible over the years like some PS4s do now.

The system’s UI is worthy of note, too. A very crisp, clean design with light or dark options out of the box, with more themes looking to be a common thing on the eShop after launch. Each option on the UI has a unique sound effect when selected, giving the home menu a touch of Nintendo charm which is otherwise missing from a very clean and modern UI. A Quick Menu can be accessed by holding the home button, allowing access to sleep and brightness settings – though the auto brightness has thus far served me better than my phone often does.

The battery time of 2.5 hours in-game isn’t the best, admittedly, though I seldom found myself in a situation where I was playing for that length of time without easy access to a power socket or a USB port. Mind, the device is slow to charge from USB when playing, meaning those interested in taking a USB battery pack with them should keep it attached in sleep mode whenever possible – even then, filling the battery will take hours longer than from a proper power supply.

But of course, the system cannot be spoken of without mentioning the JoyCon – the most interesting part of the Switch. While connected to the system they offer a perfectly serviceable – if not preferable – way to play games, and in the grip much the same can be said, though it is much more comfortable for longer sessions of play. The most interesting part of the JoyCon, though, are all the features housed inside.

Full gyrometer and accelerometers? Check. HD rumble? Check. IR camera? Check. NFC reader/writer? Check. And these features aren’t for show either – in 1-2-Switch and even Zelda these features are shown off to the fullest. Zelda’s amiibo functionality uses the NFC reader housed in the right JoyCon, and the gyros in both are used to help aim arrows and more in Breath of the Wild. 1-2-Switch goes a step further and uses all of the JoyCon features. Using HD Rumble to count the number of balls rolling in a box, or feeling the pressure of the stream in Milk is amazing, if a little uncomfortable where Milk is concerned. But the authenticity of the feedback cannot be denied, and it is not something I’ve ever felt anywhere else. The IR camera is also used in 1-2-Switch to detect your mouth movements to make you eat sandwiches – though it’s certainly not the best example of the technology, and time will tell to see if anything better comes of this… Unique, asset.

Although the JoyCon sat in the JoyCon Grip are an ideal way to play games for long periods of time, the Nintendo Switch Pro Controller is definitely going to be a firm favorite for a lot of people. Taking cues from all modern controllers, the Switch Pro Controller is textured on its handles – the Dual Shock 4, and has offset sticks and a wide, mostly flat top with large shoulder and trigger buttons – like the Xbox One controller. The sticks themselves, however, feel in a world of their own – in an incredibly comfortable ergonomic position, the sticks glide from side to side and around whenever they are pressed, making every game feel silky smooth. The D-Pad is comfortable and thick – something sorely missing on the JoyCon – and makes a satisfying click-like feedback when pressed. All of the face buttons feel chunky, and require a tiny bit more pressure to press than the Dual Shock 4, for example, though not by much. The weight is by far the most satisfying of any of Nintendo’s controllers for a long while, and the controller even has the NFC reader/writer for amiibo, as well as HD rumble in its handles. A surprisingly varied array of features, and an essential accessory for hardcore gamers – but the price tag of £60+ is just a tad too much for many gamers to swallow right now.

And who can blame gamers for wanting to be sure the investment is worthwhile, before dropping £280 on a console, around £50 for a game, and that nice Pro Controller will add around £60, bringing the totals up to £390. Even without the Pro Controller, £330 for a console with one game can be a tough sell.

But I’d argue that Nintendo has succeeded with the value proposition. What we have here is a small, streamlined console which is very serviceable in the home on the TV – though will likely falter when running multiplatform games without heavy optimization. On the go, however, when considered as the world’s most powerful dedicated handheld gaming system, it’s an incredibly impressive piece of kit, especially considering the graphics on display in games like Breath of the Wild. At 720p the games look crisp on the handheld’s screen, while on the TV some games struggle to hit 1080p – and others, such as Mario Kart 8 Deluxe, hit the mark perfectly.

This is a generational leap for Nintendo – in terms of power when compared to all of their previous systems, it mops the floor with all of them, and in a much smaller form factor to boot. No, it’s still not matching the PS4 or Xbox One in terms of raw graphical fidelity, although it can be argued that, due to range of control and play options in the given form factor, it’s a far more impressive piece of hardware.

This is something new, once again, from Nintendo. This should teach us to be wary, but also optimistic. It’s a far more streamlined, gaming-focused device than we’ve seen from Nintendo in over a decade, something that can be used for hardcore single player experiences and multiplayer madness. But the ultimate test will be the software, the games, that we get in the long run.

Right now the future looks bright for Nintendo, though there are doubts. What is certain right now though is that Nintendo has delivered an astonishing, wonderful piece of technology with the Nintendo Switch. The way it handles the transition from docked to handheld gameplay is just as smooth as marketing and promotional videos suggest, the graphics and gameplay are just as you’ve seen videos of, the quality of the game experience is unparalleled with other gaming handhelds. This is just, truly, a brilliant piece of hardware for Nintendo, one I’m very excited for the future of. 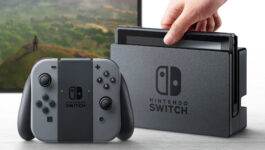 A masterclass in software and handware design collide in this portable gaming masterpiece - though time will tell if it can punch up to the big boys of console gaming.