Necropolis Review – The City of The Not Really Dead

People in general love treasures, particularly when playing games, requiring little to no incentive to embark on a new journey to get their hands on some mythical item that could change their lives forever. For this reason, a game such as Necropolis had the potential to become a huge hit among PC gamers if it wasn't for some unfortunate design choices.

Necropolis doesn't have a real story, with the game giving players very little reason to explore a secret underground tomb that has been used by the archmage Abraxis to practice magic. After choosing between a few different characters, who come with only some light cosmetic differences, players are thrust right into the action, with just a few introductory sequences which can be used to get used to the controls and the basics of combat. Despite the lack of a true story, Necropolis features plenty of dialogue written in a humorous tone that's also used for item descriptions. This peculiar choice does manage to make the game stand out from similar titles, but the humor seems to be forced at times, ending up making players stop caring by the Brazen Head's quips soon enough.

With Necropolis sporting a paper-thin story, the actual gameplay is the main focus. Unfortunately, Necropolis' gameplay is pretty hit and miss due to some glaring issues that make it stop being fun after a few hours. At its core, Necropolis is a third person dungeon crawler game with roguelike features mixed in, such as procedurally generated dungeons filled with enemies and traps, plenty of loot and crafting and more. Taking a page from the Souls series, Necropolis' combat closely resembles the system created by From Software for its popular series, with players being able to execute a light and heavy attack with the equipped weapon, use a shield to block attacks and so on. Like in the From Software series, players will always have to think long and hard about how to engage enemies, as they can be tough, especially when they attack in groups. The Stamina mechanic is also lifted almost straight from the Souls series, with each attack and defensive maneuver requiring a certain amount. A unique twist to the system is exhaustion, which sets in when too much Stamina has been consumed in a short amount of time, or when a charged or jumping attack has been used. Combat is probably one of the game's best features, requiring players to think strategically, offering the right amount of depth in the process.

Despite the Souls' series influence, Necropolis features very little in terms of RPG mechanics. There's no way to increase the character stats, outside of the Blessing of the Gods, which increases health for a price, and the only way to improve combat performance is to pick up weapons dropped by enemies or purchase them. Players can only carry two weapons and two shields at any time, so inventory management is another important aspect to succeed. The lack of role playing game elements, which is unfortunate for a game like this, introduces us to what is probably the biggest issue of Necropolis: lack of sense of progression. 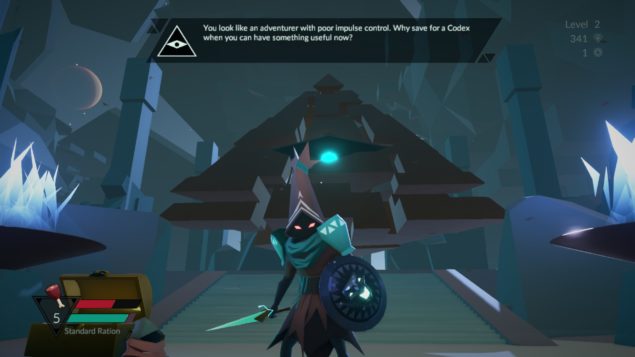 Dying in Necropolis is quite common, especially at the beginning when the player lacks a good understanding of the game's core mechanics. Upon death, players will be able to check out their performance for the last run and as a whole, receiving a different amount of Tokens depending on the total gems collected, rooms explored, enemies defeated and so on. These tokens, which can be used to obtain special Codex books which enhance performance, open special chests often found between floors and more, are the only thing that carries between runs, not counting purchased Codex books and skins. This means that players will effectively have to begin all over again each time they start a new run, with only Codex books potentially making things feel a bit different.

This lack of sense of progression completely kills any fun one might have had in the first few hours, and other issues become even glaring at this point: floors generally don't look too different from one another, despite several different biomes, enemy variety isn't all that great and the available combat strategies are limited due to weapons having similar properties and the lack of long range options, item descriptions are far from being informative, often leaving players completely in the dark about the effects of a potion or of a specific Codex book. Making everything even worse is the fact that there are just nine floors to explore, with only the final one featuring a boss that's not even all that hard to defeat. Completing a run successfully doesn't take more than two hours in most cases, and the game offers very little past this point. That's not counting co-op, which makes things slightly more interesting for a few additional hours. The team already confirmed that more content will be coming in future updates, but in its current state Necropolis is heavily lacking in this department, with an experience that just becomes more frustrating the longer it goes on, especially when playing solo. 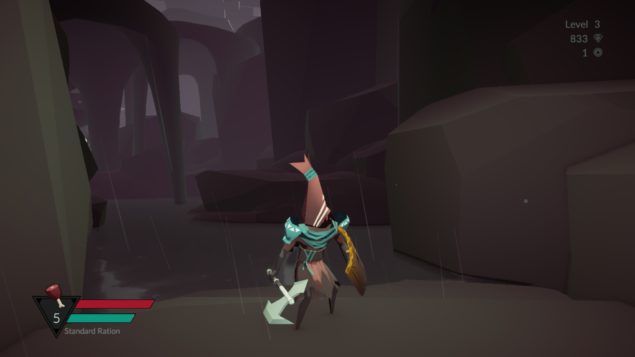 If the Necropolis experience is flawed, the game's presentation at least does a good job in making the game stand out from the competition. The team opted for a stylized look which actually gives the whole game quite a bit of personality, with playable characters, NPCs and enemies having a very distinct appearance. Environments, on the other hand, aren't as distinct, with corridors and room having the same overall look, despite the different biomes. Performance is also solid enough, with several advanced options that allow players to tweak the experience to their likings. The soundtrack is also appropriate, with a few atmospheric pieces that are nicely suited to the adventuring of the game.

Ultimately, it's a real shame that Necropolis isn't worth much in its current state, as when the game works, such as during combat, it can be fun. A few more months in development might have allowed the team to polish the experience further and add more content so that it wouldn't have felt as dull and frustrating as it now does after just a few runs. Right now, Necropolis is not worth its price tag, with lack of content and any real progression damaging the experience considerably.

Necropolis is an interesting dungeon crawler that sadly fails to live up to its full potential due to a severe lack of content and sense of progression. The game isn't exactly bad, as there are some interesting ideas, but it features so little incentive to play again that most will end up abandoning it after a few runs. Co-op is just not enough to salvage the whole experience. With such glaring issues, Necropolis is definitely not worth its full price tag for the moment being.