It wasn't too long ago that I reviewed the Nacon Revolution Unlimited Pro, Nacon's entry into the premium controller range and my thoughts have remained very much the same as what I said about it in my review. Indeed, it has replaced my Dualshock controller and is also my go-to when I need a controller for the PC.  Knowing this, it feels a bit strange to now be reviewing what is essentially the entry product from Nacon, the Nacon Asymmetric Wireless Controller. 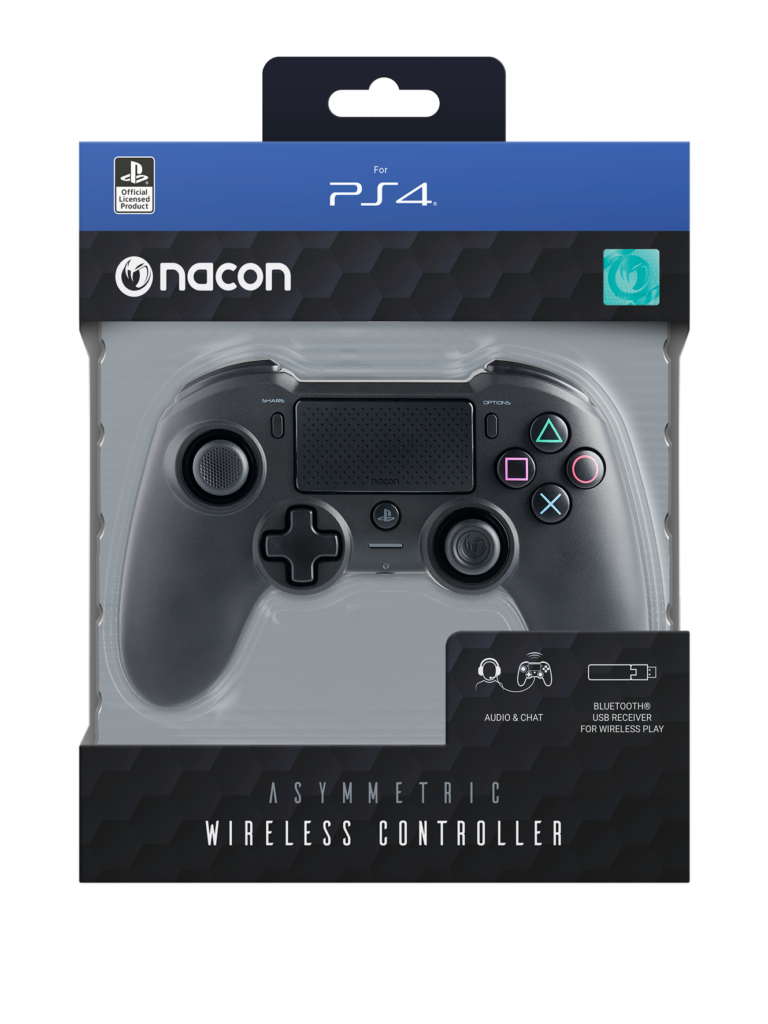 One thing instantly worth mentioning about the Nacon Asymmetric Wireless Controller is that despite the fact that it comes in at a reasonably cheap price (you can buy one for £39.99, compared to the DualShock 4 which is £44.99 at best), the build quality is great. That's in function, I do have to admit that the look is a bit on the cheaper side. There are no grips, everything is the same matte black plastic. Also, as with the Revolution Unlimited Pro, you don't get a lightbar or inbuilt speaker.

The thing that helps to improve the feel of build quality is helped along by the fact the controller has a bit more weight to it than the regular DualShock 4, plus it's bulkier than the controller it imitates. This extra bulk, much like any controller with more size, is certainly beneficial for me and helps with longer play sessions. I have large hands, so crunching my hands up when playing marathon sessions of any game isn't the most comfortable of things.

Alongside the bulkier frame comes larger face buttons, which are also positioned well. One quite quirky feature is the positioning of the circle button, which is actually curved along with the curvature of the controller. Also, you'll find that the top buttons and triggers are also larger and these, alongside almost everything else on the controller have a satisfying click to them when used.

Note the word almost. The one thing that seems a step-down is the D-pad. Yes, it's of a larger size than the DualShock equivalent, but this is one of the areas the controller really feels cheaper. Of course, the major selling feature is the fact that it is asymmetric, with the left joystick placed at the top of the controller. I genuinely prefer that layout to that of the regular DualShock controller. 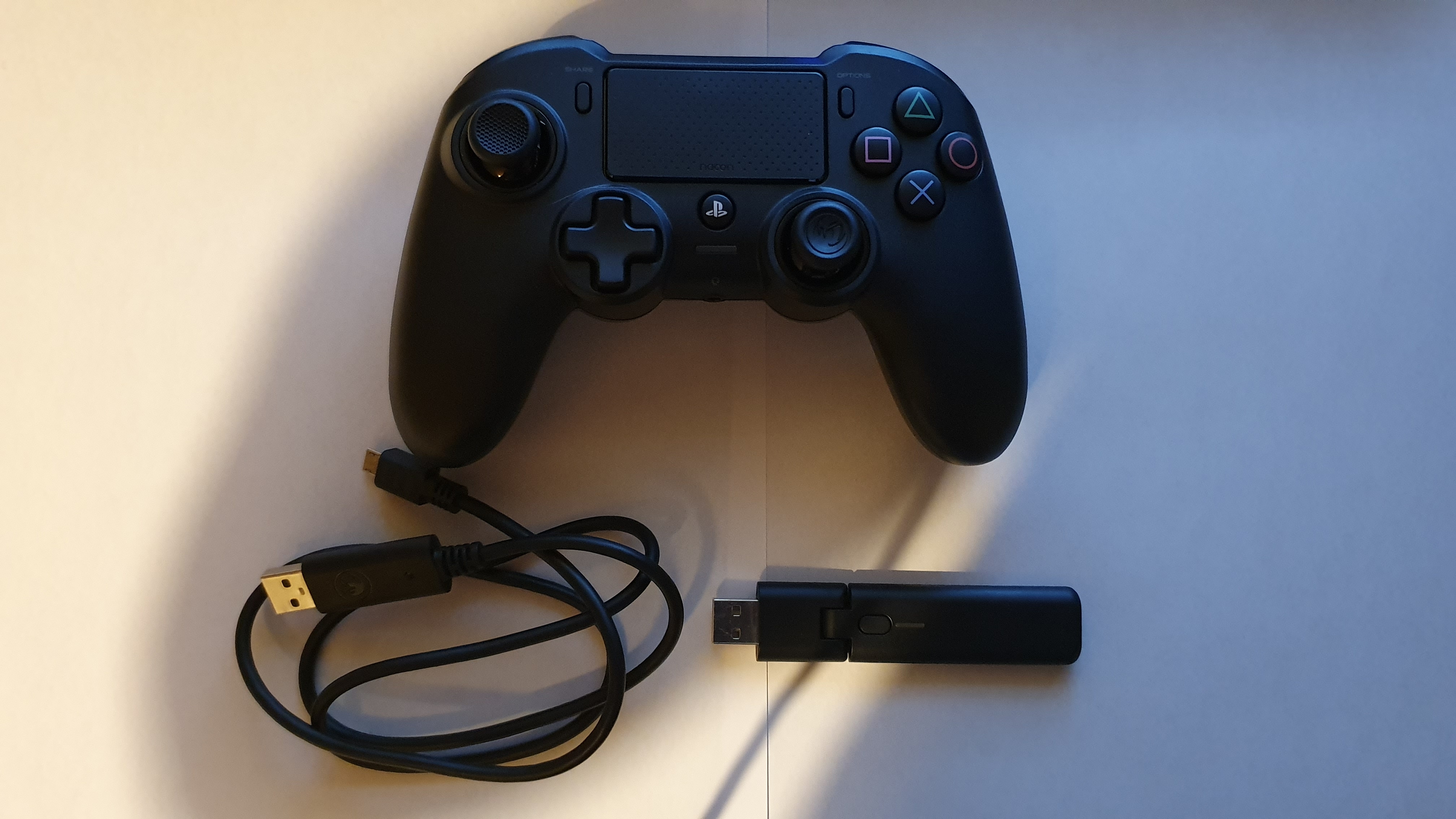 There are slight issues in the fact that, like the other controllers by Nacon, the controller doesn't link directly to a PS4. What it does, is come with a wireless dongle that fits right into the PS4 or the PC, though it isn't too bad of a thing all things considered. The controller does have a button on the back which, when pressed, will indicate the battery life on the light between the D-pad and right analogue stick.

Still, the functionality of the Nacon Asymmetric Wireless Controller is top-notch. You press a button, it works instantly and the game does what you tell it to. There is always a risk with some controllers of a lag between your input and the expected action, none here. This is the exact same whether you're using it on the PS4 or PC. Yes, you can just pop the wireless dongle in your PC and the controller will gladly work.

Still, as I've said, plug it in and you're good to go. You're also good to go for a fairly reasonable amount of time too. While the controller professes "up to 7 hours" of playtime, you're going to find it's more around the 5.5 to 6 hours range. Also, as one could expect, it has a 3.5mm headset jack so you don't have to worry about not being able to chat online or play games through a headset.

This isn't to say that there isn't a slight niggle with using it on the PC, though this is an issue I've had with any PlayStation related controller on the PC - games just don't seem to be built for it. Can I truly blame Nacon for this? No, I can't. The problem is after using the Pro, this does feel like the step down that it is. 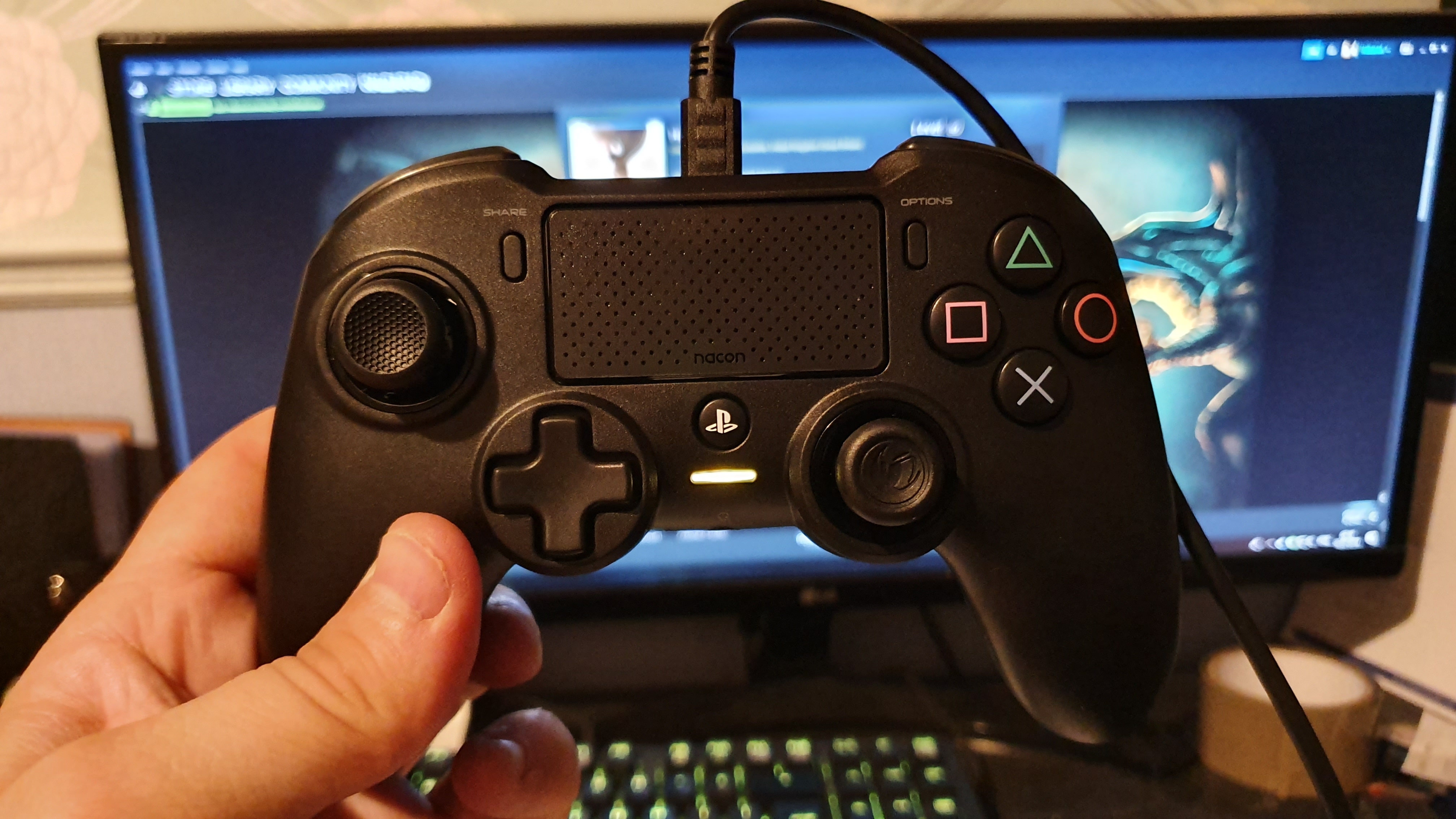 Still, If you're looking for a controller with a high build quality for your PS4, particularly one with the asymmetrical style of the Xbox controller and even one cheaper than the regular DualShock 4, the Nacon Asymmetrical Wireless Controller may be the one for you. Yes, there are slight downsides such as the lack of a light bar and controller sounds, but for the price, you could certainly do much worse.

The Nacon Asymmetric Wireless Controller is one of the best budget PS4 controllers on the market. While it's missing some smaller features, like the light bar and controller audio, and the D-Pad can feel a little on the budget side, it's still expertly built to last. It's a very comfortable controller, easy to use and has the Xbox Controller Layout, all at a price-point lower than the actual DualShock.