Game controllers have always been a fairly mixed bag, to say the least. Normally, I'm more than happy to stick to the default option. The DualShock is more than functional, having changed very little over the past twenty-two years. The only thing I could say is that it's a little small in the hands if you're on the larger side. In comes Nacon, with the Nacon Revolution Unlimited Pro controller, an officially licensed controller that looks to enhance your PS4 and PC gaming.

I have to admit, over time I've had a mixed bag at best with controllers, particularly when looking for one to use on the PC. I can't say I'm a big fan of the Steam controller, with it only shining due to the support it has for games that generally lack controller support. Other controllers have tended to be on the side of looking of feeling great, but not offering that extra support. Here's one that's looking at pushing for both quality of build and functionality. 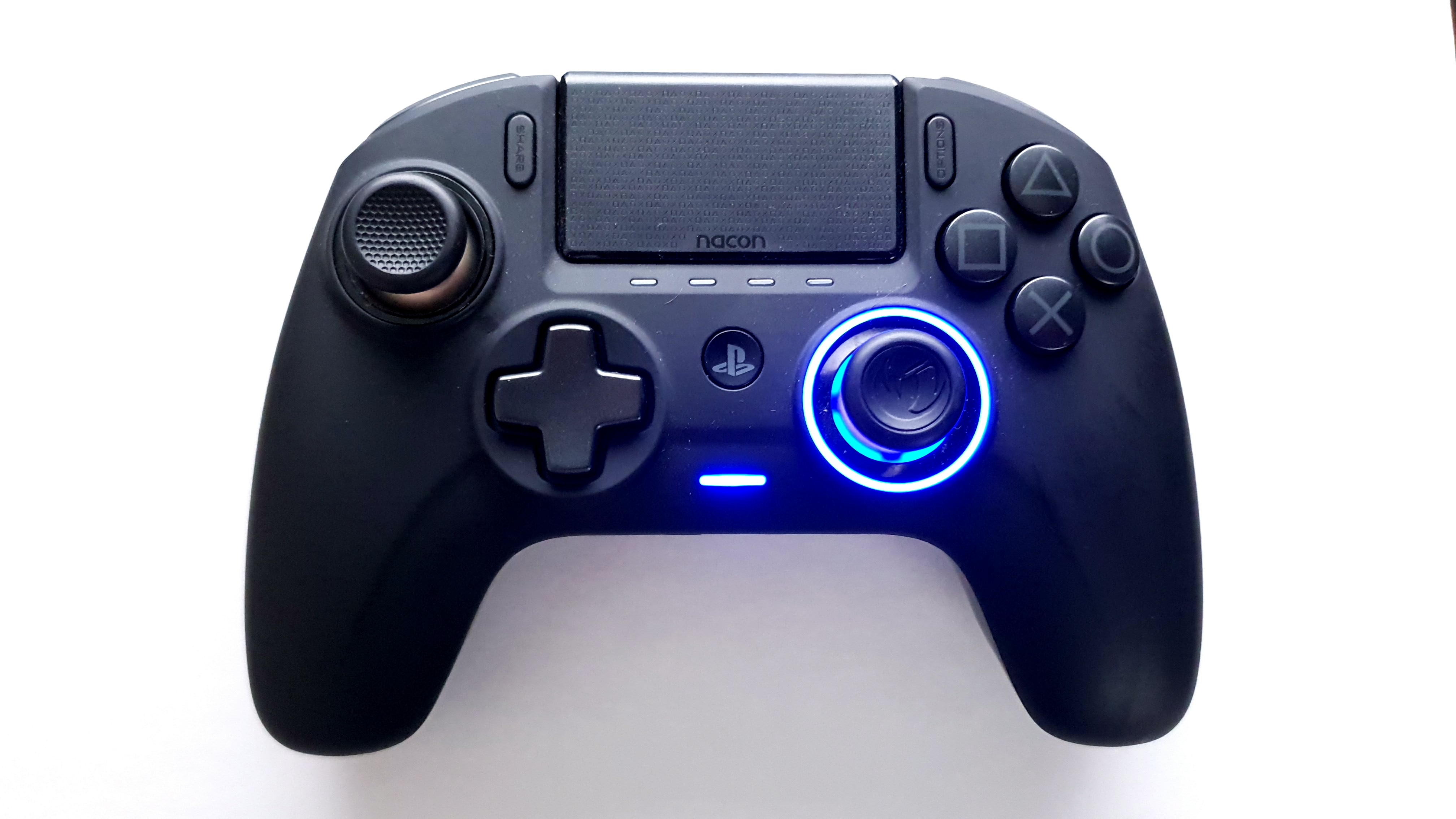 That's one thing that can be said about the Nacon Revolution Unlimited Pro, the build quality is certainly high, with a good amount of options for the user. The size and shape just feels more comfortable in the hands than the standard DualShock 4, that's the first thing that needs to be said. It's got a fair few similarities to the Xbox One controller in feel, only having longer handles for you to grip onto. This alone makes for a decent feel when playing on more prolonged sessions, my hands never having complained at me.

What you'll find is a layout similar to that of the Xbox Controller, with the left joystick being placed at the top of the controller rather than in line with the right one. If I have to give anything to Microsoft, they certainly got that part right with their controllers. Naturally, being for the PlayStation 4, you'll find the traditional PlayStation shapes on the face of the buttons, as well as the touchpad, flanked by the share and options buttons.

What truly benefits this is the few customisation options. The Nacon Revolution Unlimited Pro actually comes with the ability to place weights, either 10g, 14g or 16g, under the removable covers in each of the controller's grips. This can add a much-needed bit of weight, letting you feel the controller that bit more in your hands. It can also slightly increase the feel of vibrations through the controller, though it is only a slight increase. Personally, I use the 16g weights and I think it really helps to make the controller feel like a solid, sturdy piece of kit.

More than just increasing the weight of the controller itself, but also the weight of the joysticks by changing the size of the shaft. Also, with the joysticks, the controller has the traditional concave cap but also gives you the option to change to a convex cap. Was that a requested feature? I'm not really sure, but it's there anyway. Personally, I use the heaviest weight in the shaft of the joystick and stick to a concave cap as I feel it offers the best feel, grip and function overall. 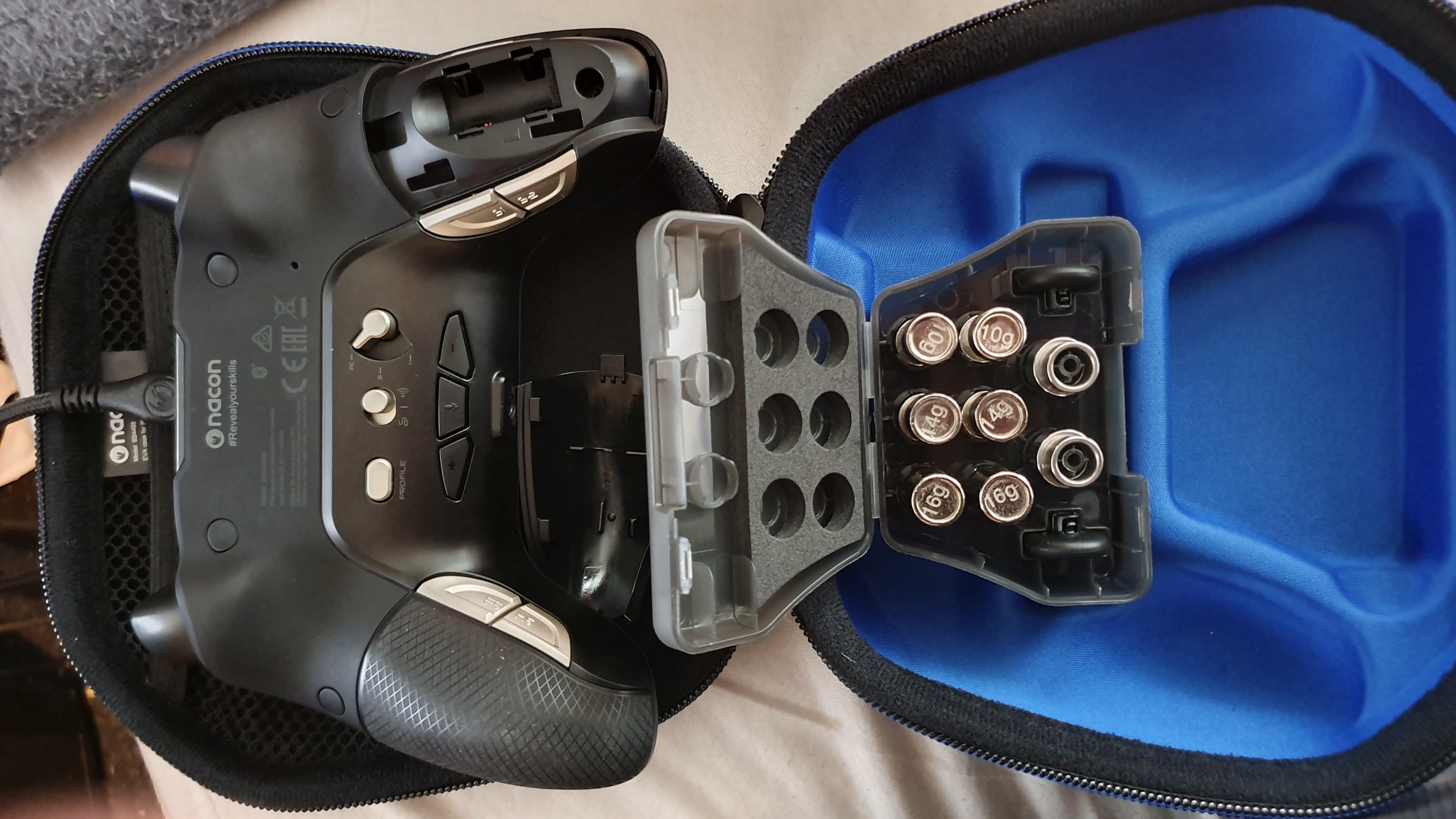 All of this is packaged in a sturdy hard-shell case, with the components for physically modifying the Nacon Revolution Unlimited Pro controller in the ways mentioned before, as well as containing a three-meter wired USB to USB-C cable and a USB Bluetooth receiver. Also, something that I should probably use is the included dust-cloth, but that's by-the-by.

It's the inclusion and use of both the wireless transmitter, as well as the cable, combined with the options you have on the back of the controller that I'm more than happy with. As it's both a PC and PS4 controller, keep it attached to my PC via cable with it switched to the cable option if I want to use it on a PC game, then switched to the PC profile. Then, should I want to jump onto the PS4, as soon as I turn it on the wireless transmitter kicks in, all I need to do is switch the controller to wireless mode and select my profile. I'll cover the profiles in a short while.

Frankly, when it comes to outright functionality I can't complain at all. The Nacon Revolution Unlimited Pro is a fantastic sturdy controller. It does have a few small downsides that impact the functionality though. For a licensed PlayStation product, it's strange that the controller doesn't have a light bar or inbuilt speaker, neither are essential but are certainly nice features for games that use them. Fortunately, it does have a jack to attach your headset to the controller, so there are no issues there.

The only issue I've personally had, and I've searched around on forums for others with the problem, but my X face button had a tendency to stick. At least it felt like it was sticking, more that it wasn't immediately retracting, which made such as platformers difficult when a quick double-tap of the X button was needed for double-jumping. It's a minor issue that only seems to be affecting me at least. I haven't noticed any other issues at all, with the buttons, triggers or even the additional hotkeys on the back. 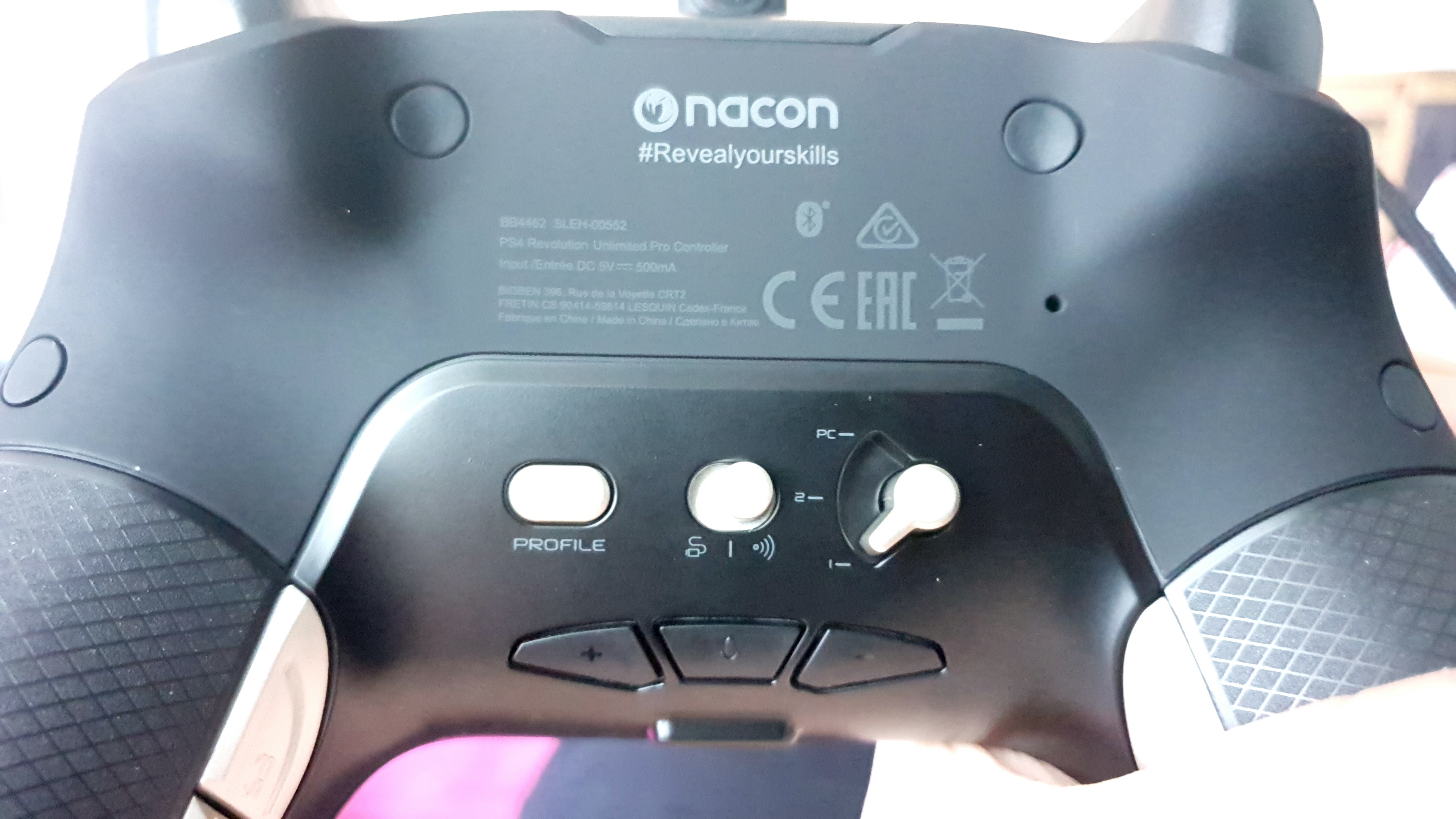 Away from the hardware is the software, which the Nacon is a bit of a mixed bag. Out of the box, if you're just using it for the PS4, you're going to find yourself more than happy with the controller. Even on the PS4 you also have the option to duplicate a button/trigger onto the four hotkeys on the back of the controller, it's a fairly easy process as well by just holding down the profile button for a few seconds, pressing the hotkey and then pressing what you want it to mimic.

For more extensive customisation for both the PS4 and PC, you're going to need to download the Revolution Unlimited Software from Nacon's website. This software allows multiple customisation options, letting you modify the second PlayStation mode (#2, PlayStation Advanced mode), remapping buttons, setting the dead-zone on triggers, the vibration intensity and joystick sensitivity and more. The PC mode also allows for the same functionality of the PlayStation Advanced mode but designing it for use on the PC.

It's always easy to tell which profile you're on too, the regular PlayStation profile has a blue ring around the right joystick, the PlayStation Advanced profile shows a red ring while the PC profile has a magenta ring. It all makes the controller looks pretty nice, to say the least. Again, it's just a shame about the lack of a light bar. Still, this functionality combined with the additional trigger buttons offers for an outstanding PS4 controller. On the PC, I'm still getting to grips with it, having got it working perfectly with some games but finding it a struggle with others. 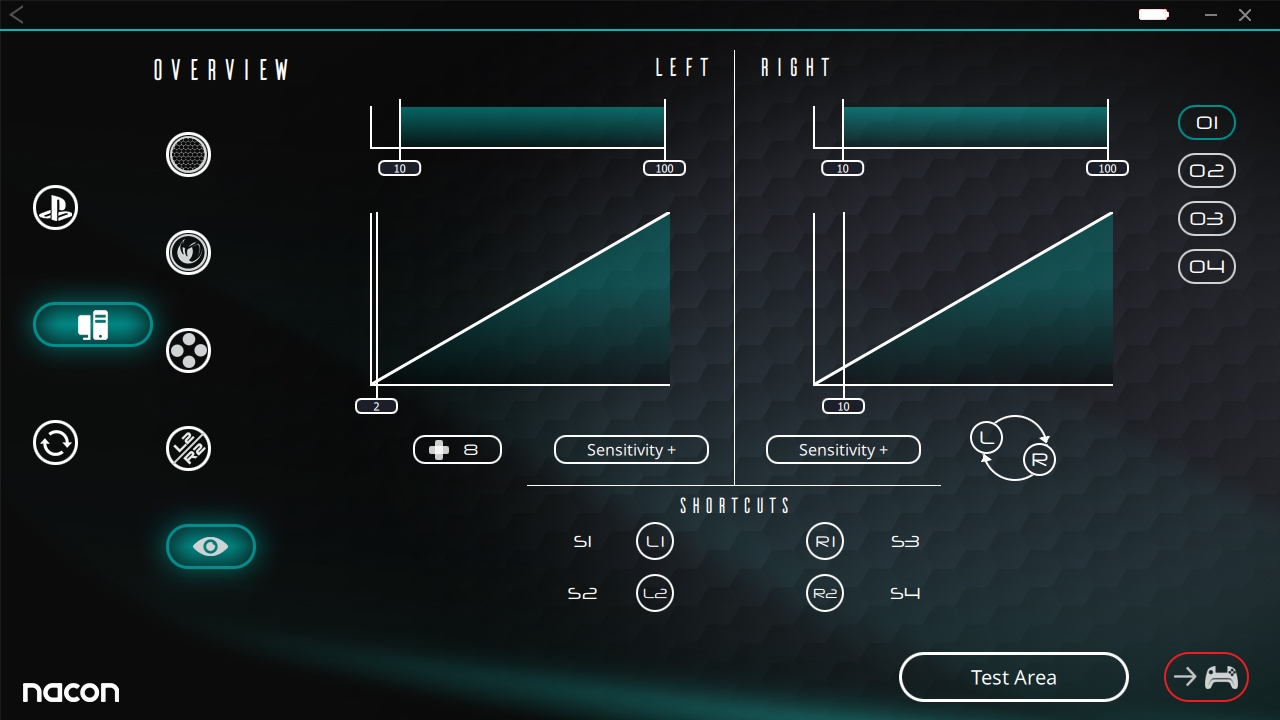 With the premium controller naturally comes a premium price, though this has gone down from when it was first released. It started with an RRP of £149.99 or $179.99, though you can currently find the controller at £119.99 or $154.99, depending on where you look. At the former, I'm not sure if I would have recommended it, but at its current price, you're not going to find a better option around in the 'pro' controller range.

All things considered, it's hard not to praise the Nacon Unlimited Revolution Pro controller. It truly has got a very high build quality, with everything from customisation options to sturdy packaging for travel and more. The minor issues with the controller, such as a lack of light bar or inbuilt audio, is mitigated by just how high of quality in build and functionality there is here. If you're looking for a controller in the 'pro' range, you don't need to look further than the Nacon Unlimited Revolution Pro.

Edit @ 14:30GMT (+3hrs 30mins from posting) - In response to a comment regarding my rating of the build quality while tying it into a line regarding the X button has a tendency to stick - or feel like it was sticking - upon rapid usage, I'll explain why I've rated the controller as I have.

Having written the review I spent a few (around three) hours searching Reddit, forums and more to find a duplicate of the problem that I was facing. Having not found a single mention of it, plus the fact that it only started occurring after a certain event, I decided that for an error that was limited to a specific action, seemingly not found by any other user and potentially something I caused myself, I could and can justify rating the build quality on every other square millimetre of the controller. I will be both attempting to locate the cause of this problem here and using a second controller to attempt to recreate the problem and will update with the results.

With an excellent build quality, extensive customisation options for both the PlayStation 4 and PC, as well as options to customise the controller itself (weight/feel), while also being very comfortable and responsive, there's a lot to like about the Nacon Revolution Unlimited Pro. There are a few minor downsides, such as a lack of light bar or inbuilt audio, but the few minor issues pale in comparison to what is an otherwise excellent controller. If you're looking for a controller in the 'pro' range, you don't need to look further than the Nacon Unlimited Revolution Pro.