The MSI MEG X570S ACE MAX motherboard retails at $449 US which is premium tier pricing for an X570 motherboard. In terms of build quality, MSI has improved almost every aspect of the original ACE and MAXed it out on this motherboard. The abundance of heatsinks make sure that the VRMs and power delivery components get plenty of cooling and in fact, I was really surprised to see MSI's use of thick thermal pads across the board, especially the M.2 slots where all four slots get double-sided pads.

In terms of performance, the stock out-of-the-box benchmarks with the AMD Ryzen 9 5950X and MSI MEG X570S ACE MAX were right there with other flagship X570 offerings. But we also saw the temperatures on VRMs to be the lowest of the entire bunch of motherboards we tested. The power numbers also saw more stability compared to the X570 (non-S) ACE model and idle power is now a bit better. Overclocking on the CPU on this motherboard is also a breeze with the Ryzen 9 5950X pushed to 4.675 GHz across all cores and a voltage supply of 1.328V. This raises the multi-core CPU performance by 6-8% in technically all benchmarks though the single-core performance is going to be affected due to a higher single-core boost clock out of the box. So only if you are running multi-core applications would you yield a net performance advantage otherwise the 5950X is binned a lot out of the box that it won't require any tuning.

This shows just how effective the changes on the power delivery are which has been updated to a 16+2+1 phase design compared to the 14+2 phase on the original MEG X570 motherboard. 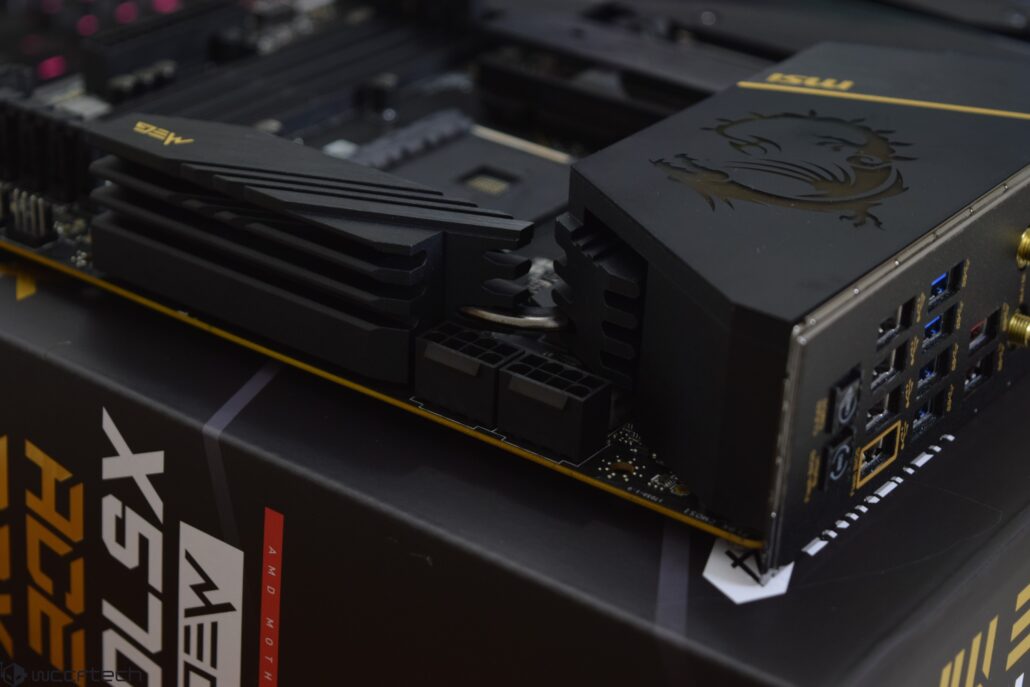 As for I/O, the MSI MEG X570S ACE MAX is loaded. I would even say that it is overloaded with the number of things that it has onboard. There is plenty of USB 3.2 and 8 SATA III ports that are always a good choice to have. Triple PCIe 4.0 x16 slots and a single PCIe 4.0 x1 slot are also included but the amount of M.2 ports (6 in total: 4 on the motherboard, 2 on AIC) are amazing. The M.2 XPANDER Z AIC is a great accessory bundled with the motherboard. But having so much I/O onboard usually means that some of it will be sharing bandwidth with other components.

As such, certain PCIe, M.2, and SATA ports share the lanes and need to be disabled to use IO in other areas, for example, the PCIe x1 slot shares bandwidth with the WiFi module, & either one needs to be disabled to use the other one. The M.2 and PCIe slots share bandwidth with the SATA ports too so you are only left with 4 active SATA ports if you are going to use all PCIe slots. There are a few features that I would have loved to see on the board such as Thunderbolt headers but I guess that would have to wait till the next generation which arrives in late 2022. The Audio & WiFi capabilities along with the singular 2.5G LAN port are great in their own regard but a dual NIC on a board that costs almost $500 US would've been great.

The original MEG X570 ACE motherboard was a great board but had its fair share of shortcomings which MSI has addressed with the release of its MEG X570S ACE MAX offering. The original ACE has a price of $399.99 US in the retail segment whereas the X570S ACE MAX will cost $50 US more. And if you were planning to go for the original design, I would say that it's a much better investment to spend $50 more on a motherboard that is absolutely jam-packed with features and has a rocker of a design with a stealthy black theme, a powerful power delivery system and so much I/O for any use case.