Alright, so. Let me start this review with the following: Did you know that microphones can peak and stop picking up your voice if you shout loud enough? I’m pretty sure you have come across this very problem with multiple microphones and MSI has finally made one that can essentially cover my loud voice without losing any quality.

The MSI Immerse GV60 microphone is yet another one of those hardware propositions that MSI showed off during CES 2022. This microphone is tailored for streamers and is looking to compete in the widely popular “content creation” category. But, does it stand a chance against those microphones? Is it worth having for any fledgling content creators that want to go beyond the Blue Yeti standard? Let’s find out.

From the get-go, the MSI GV60 has a slick and beautiful appearance. It’s a matte-black colored condenser microphone that connects through a USB-C to USB-A cable that’s included in the package. The cable itself is pretty lengthy at 3 meters. However, if you possess a longer USB-C cable, the microphone will lend itself to be plugged into that.

The GV60’s cable that comes with the box also has a rubber strap that you can use to tie down any excess cable with. So, if you’re only interested in using it with the stand, you can very easily connect the microphone to the stand without having to worry too much about any cable management issues.

Of course, this also means that you will be able to mount your microphone in a variety of ways. The Immerse can be set on either its included swivel stand or you can put it on a boom arm easily. The device isn’t that bulky, either. Without a stand, the microphone takes 7 x 4.2 x 4.2 inches of space, so you won’t have an issue fitting it on your desk.

If you want to use a boom arm, however. I am afraid to say that the Immerse doesn’t have such an accessory included in its box. So, you’ll have to get that particular accessory separately.

The microphone has a few dials that control the audio from the headphone jack (which we’ll talk about later), the microphone volume, and an audio profile switcher on the side. These dials are all located on the front side of the mic alongside a mic mute button that will always be in front of you in case you need to silence yourself while you get interrupted or need to go AFK for a second.

The difference between the GV60 and other streaming/content creation microphones lies in the finer details. For instance, rather than the usual 16-bit/48kHz CD-like sample rate, the GV60 uses a studio-grade 24bit/96kHz sample rate. That alone should be enough of a selling point since this means that the audio quality is much higher than even the Blue Yeti.

Keep in mind, however, that live streaming software is bound to downsample any of the audio you make to 48khz. That’s going to maybe turn off a few streamers for sure. However, this is an inherent problem from Twitch itself since it only accepts 48Khz audio for streaming according to the broadcast recommendations.

This is where I believe the microphone actually shows where it actually leans toward when it comes to the Creator/Streamer usage. While this microphone has great uses for streamers and it actually is more affordable than a lot of high-end condenser microphones while also delivering high-performance audio. The GV60 definitely suits content creators more than anything else.

The higher sample rate will not be affected by recording software, for one. For two, a lot of the features that the GV60 has to offer can benefit both streamers and content creators alike. However, most of the benefits will be seen by content creators who are looking for a great podcast microphone.

The Immerse has access to four different polar patterns: Cardioid, Bidirectional, Stereo, and Omnidirectional. Each profile can easily be switched through a dial on the device itself. The Cardioid setting is the most important for the streamers reading this because that setting blocks out ambient noises more effectively.

The Omnidirectional setting is for those who basically want to have every ambient noise in the background. When I tested it while listening to music on the speakers from the other side of the room, I noticed that the audio coming from myself was slightly less prominent than the rest of the audio. It definitely works as intended in my opinion.

Stereo, my preferred setting, uses the microphone’s left and right channels to pick up and capture a realistic, general sound image for vocals such as singing or talking. Since I almost always sit away from my microphone when doing things such as calling my friends or recording videos, this setting has worked wonders for me since I don’t have to be close to the microphone for it to pick up my garbled English.

See, I’ve had a complicated relationship with microphones. I’ve used all kinds of condenser and dynamic microphones and almost every single one has managed to peak and lose my voice the moment I start laughing out loud or yelling. Since I’m a very excitable guy (for better and for worse) this issue has stuck around for way longer than I’d like to admit.

However, the MSI GV60 uses some kind of voodoo magic (or 36 (±3) dB sensitivity with ≦ 2.2 KΩ impedance) to not only be able to pick up my shouting and excitement but also continue to do so without peaking or losing the rest of my voice for a while. That is an accomplishment I’m not going to ignore because a lot of loud-voiced people I know will be buying this microphone in the coming days after seeing how great it was at continuing to pick my voice.

Going back to the subject of the microphone. No matter what mode you use, you still will need some noise reduction filter (either through software or through the microphone’s pop filter) to mask some keyboard stroke noises. Keystrokes were way less likely to be noticed by the microphone when I used the pop filter. They weren’t completely erased but then again I wasn’t expecting it to do so.

Keep in mind, however, that if you’re not interested in using the headphone jack, you may have to tweak your sound settings. The microphone is an audio/microphone device that will automatically set itself as default for both once it’s plugged in. As such, you will have to set the default audio device to what you’re better accustomed to using if you’re not going to use the headphone jack.

Overall, this microphone is the perfect fit for content creators. While the benefits certainly apply to the streaming world, they will feel more like they are unnecessary additions. However, I believe that this microphone is perfect for streamers that want to also dabble in content creation. In this aspect, the creator will get the quality and performance that can be a game-changer for a lot of people in this space.

The microphone is really flexible and, compared to hobbyist microphones, it offers the quality you’d expect of a professional microphone while keeping its price somewhat affordable. Let’s put this into perspective. If you go to the market and try to check the price for a basic Blue Yeti, you will find that the microphone will cost the same price as the MSI GV60.

Meanwhile, other microphones with higher prices will bring the same options that the Immerse brings. I mean, look at the Razer Seiren V2 Pro. That microphone costs $149.99 and, while it has the headphone monitoring option, it also doesn’t have the sound profiles the Immerse has. So, while there are alternatives, they either are way more expensive or offer fewer features than the MSI microphone offers.

However, this doesn’t mean that I don’t have gripes with the microphone. For one, while its design is neat, it definitely doesn’t look that different from other microphones in the market. Additionally, some of the profiles can be quite worthless if you aren’t interested in doing certain things in the content creation space. I definitely believe that pure streamers or students won’t get much mileage out of this microphone.

However, if you are a content creator looking for a great microphone that will power your future endeavors. I believe that the MSI Immerse GV60 is going to be the perfect product for you to check out. MSI’s content creation gear has continued to get better and better in my opinion and I can’t wait to see them try their hand at other ventures. 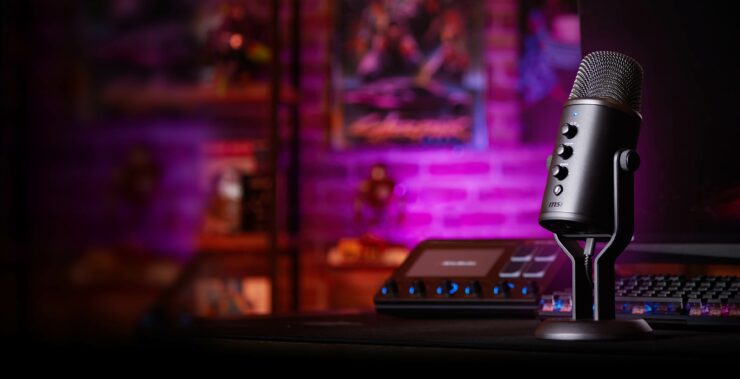 While there are cheaper condenser microphones for streamers, the GV60 offers a lot of possibilities for streamers that want to branch off into content creation. It doesn't just help for simple recordings, but it also is a great way to capture instruments, environmental sounds, and even multiple voices. While a lot of microphones offer some of the features that the Immerse offers, they tend to be way more expensive.