Well, it seems like the new year is going to bring a lot of new surprises from both gaming publishers and manufacturers. This isn’t strange as it’s always a great time to push the envelope in terms of what our hardware can get. Every gaming enthusiast will always look for the best performance with their gaming gear and today, we get to review one of MSI’s latest devices that help with this: The GK71 SONIC keyboard.

This keyboard is quite unique on its own since it’s the first of its kind to feature MSI’s red mechanical switches. These switches are some of MSI’s very own as we’ve seen during their explanation during this year’s CES. They are made with the partnership of switch maker Kailh to offer a more efficient experience for reasons I’ll get to in a minute.

So, how does this keyboard measure against other kinds of gaming keyboards? Are these red switches actually as good for gaming as MSI touts them to be? Let’s find out now.

The first thing to note about the GK71 SONIC is the RGB lighting. Thanks to MSI’s ClearCaps, the RGB is way more noticeable than what you can see in other keyboards. As soon as you plug the keyboard into your rig, you begin to see a huge spectrum of colors that goes all over the keyboard. So, this keyboard will make sure to hook you in just with that function alone as you’ll be hypnotized by the pretty colors.

The GK71 SONIC also has support for a wide variety of configurations through the Mystic Light tool from the MSI Center app. The Mystic Light tool allows access to 9 different ways your keyboard can shine and display its colors. My favorite effect is the Overlap effect because it essentially reacts to each keystroke I make with a white ripple effect.

What’s cooler is that you can also use MSI’s Ambient Link feature to essentially fit the games that you play. At the time of writing, Ambient Link is available for the following games.

What Ambient Link does is essentially have the keyboard and lighting react to whatever is going on in the game. So, you’ll see a different lighting effect from your keyboard and other MSI hardware like your CPU/GPU fan lighting when an explosion happens in Watch Dogs or when you hit a weak spot in Monster Hunter World. 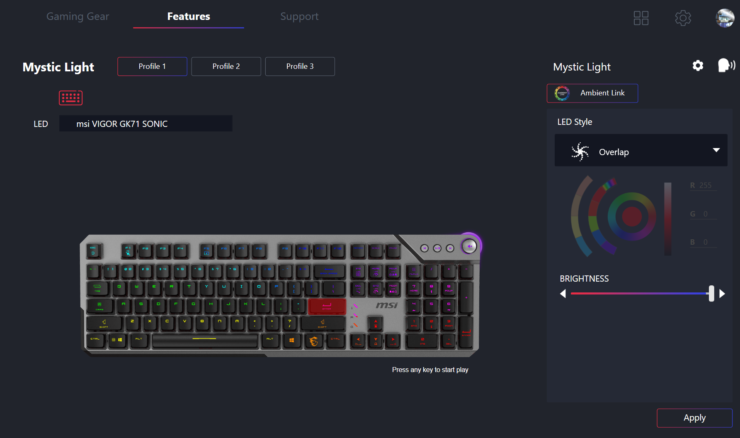 But, that’s enough about the lighting. We want to focus on the functionality of the keyboard and I am happy to report that this keyboard is great for high-performance gaming sessions. To an average joe, a 35-gram actuation force mechanical switch might not make a big difference. But for someone who wants to have fast inputs in a competitive setting, this keyboard is just the right fit.

This can be a bit of a double-edged sword for people who don’t type as fast as the average competitive gaming enthusiast. I used the GK71 SONIC for a long time and found out that sometimes my keypresses act as if I’m holding the key because my finger lingered around for a bit longer. You know, like having a double “s” when you meant to type one.

Perhaps in these cases, the keyboard might be considered a little bit too sensitive. However, this keyboard is almost unnoticeable when you type a lot of words in quick succession or when you are playing a game of Counter-Strike and need to have movement available the millisecond your finger hovers over the key to avoid a potentially fatal headshot. 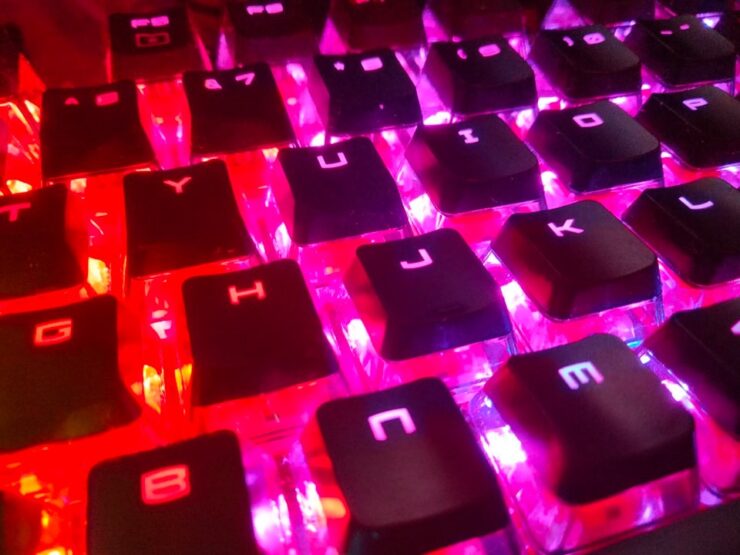 This keyboard is a full-sized unit. However, this keyboard also counts with several multimedia functions for when you want to play music. Besides the usual Play/Pause buttons, it also has access to volume control through a scrolling wheel which also can be pressed to mute the audio if you need to in a snap.

What I like the most about the keyboard is its Fn key support that allows you to take control of several aspects of your keyboard. The GK71 SONIC allows you to use adjust things such as the brightness on the keyboard’s lights, the speed of the lighting effect, and quick color scheme changes.

The function key also provides easy access to MSI Afterburner if you have the program. If you have access to an MSI Graphics card, you pretty much already have Afterburner running in the background for at least monitoring purposes. So, this additional functionality will give you a shortcut that you can use from your keyboard.

Finally, the keyboard also has access to up to 30 different macros while also having access to up to 3 different profiles. You can easily switch between them using the function key. In fact, you can store different macro/lighting effect/setting configurations in each profile. You have to use the MSI Center application to create each macro, though, so keep that in mind.

Overall, the GK71 SONIC is a great keyboard for competitive gaming enthusiasts. This keyboard can deliver in both performance and quality and the other bells and whistles it includes are welcome for other everyday users. While the keys might be a bit too sensitive for some, it becomes a non-issue.

The last few things that are worth highlighting are the memory foam armrest which makes me feel comfortable while typing away. The armrest is separate from the keyboard itself, so you can pretty much put it anywhere you feel comfortable with your setup or you can just use an armrest of your own while using the GK71 SONIC.

The keyboard also has a 100% anti-ghosting solution in the form of n-key rollover. I have confirmed that the keyboard doesn’t have any sort of ghosting. However, you still may have some cases of duplicate key presses, not so much due to ghosting but because of the sensitivity of the keys themselves.

For the cost of $109.99 USD, I believe this is a pretty neat keyboard that will wow a lot of users both on the competitive side of gaming and on the computer enthusiast side.

The GK71 SONIC is an amazing keyboard that offers a lot of great features for competitive gamers and computer enthusiasts alike. The keyboard will hook you in with its beautiful RGB lighting configurations and keep you with its faster performance that will help you gain an edge in competitive environments or while working on other projects.