It's time for the GeForce GTX 1080 Ti to rest as the new champion has arrived in the form of the GeForce RTX 2080 Ti. Based on the Turing GPU architecture, the RTX 2080 Ti excels upon the GTX 1080 Ti in every way possible and even does so much more than the previous generation just wasn't able to do. The GeForce RTX 2080 Ti is designed for the future and even at this stage, we couldn't really test all of what it is capable of doing so we resort to simple gaming performance numbers minus the RTX and AI magic which will be coming to gamers in the coming months.

What most AIBs are aiming with their high-end designs is to not only offer something better than reference spec'd models but also something that is better than NVIDIA's own Founders Edition model. As we know, NVIDIA went all out with their recent Founders Edition cards, offering a great PCB designed to overclock and to topped it up with a factory overclock, so we can't actually call it a reference model.

This challenges AIBs to go far beyond NVIDIA and MSI has just done so. There's practically not a single department where the MSI GeForce RTX 20 series with Gaming X Trio cooler don't shine. They have a better cooling design, a better fan design, and a better PCB design. They have more overclocking prowess which users can take benefit from and there's nothing that I personally did not like about these cards, in all ways, they are perfect for gamers. My only issue is the price and there's nothing AIBs can really do about that especially when NVIDIA themselves have their FE's priced at $799 and $1199 US, respectively. If AIBs like MSI were to offer something better than those, they'd have to price them higher but the price is already just way out of reach for many gamers, to begin with.

The MSI GeForce RTX 2080 Ti Gaming X Trio makes all other cards look puny in sheer performance numbers. It offers a massive uplift to game performance. We are talking over 50% leap when the card is overclocked over the GeForce GTX 1080 Ti. The RTX 2080, on the other hand, is a sound leap over the GTX 1080 but mostly trades blows with the GTX 1080 Ti overclocked models. You can gain a good chunk of performance with overclocking if you are into it or you can stick to the stock speeds which are also great.

As for the cooling solution, it’s a big improvement in design and uses over the previous Gaming X Trio's Tri-Frozr solution. It provides superior cooling performance than the Founders Edition and does so while looking phenomenal. The RGB is not overdone and the Mystic Light cuts on the front and sides provide really good aesthetics of the card itself. Also, in terms of power draw, I saw a good decrease in full loads compared to the Lightning X which is due to a regular dual 8 pin interface while the Lightning required triple 8 pin connectors.

For just $50 US more over the Founders Edition RTX 2080 Ti, the MSI RTX 2080 TI Gaming X Trio offers world-class gaming performance and pushes it further with superb overclocking potential. The graphics card is the fastest on the planet with impeccable amounts of potential stored in it which are just waiting to be exposed by next-generation gaming titles coming in a few months such as Battlefield V and Shadow of The Tomb Raider (RTX Patch). Based on this, I give the MSI Gaming X Trio our editor's choice reward.

The RTX 2080 proves to be a worthy offering at the same $50 higher price margin over the Founders Edition. It is a great gaming card but for those who own the GTX 1080 Ti, the RTX 2080 Ti would feel like a better upgrade since the RTX 2080 trades blows with the flagship predecessor in all games we tested. 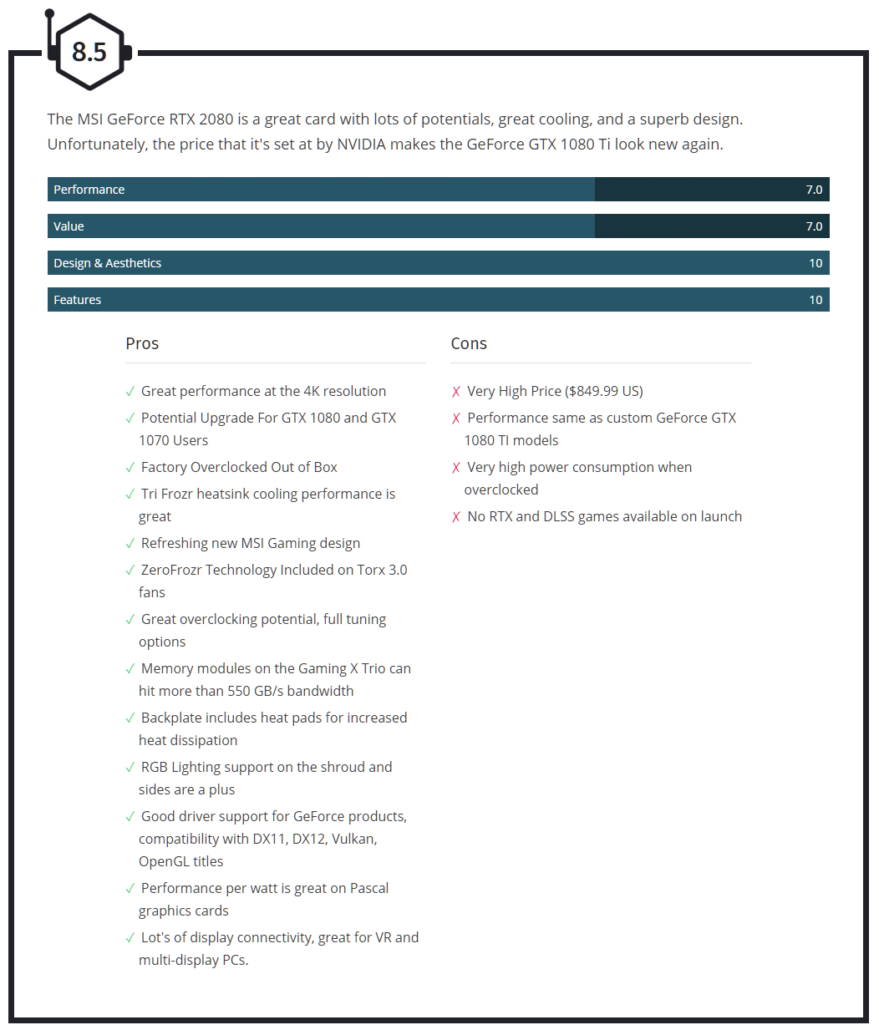 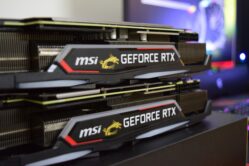 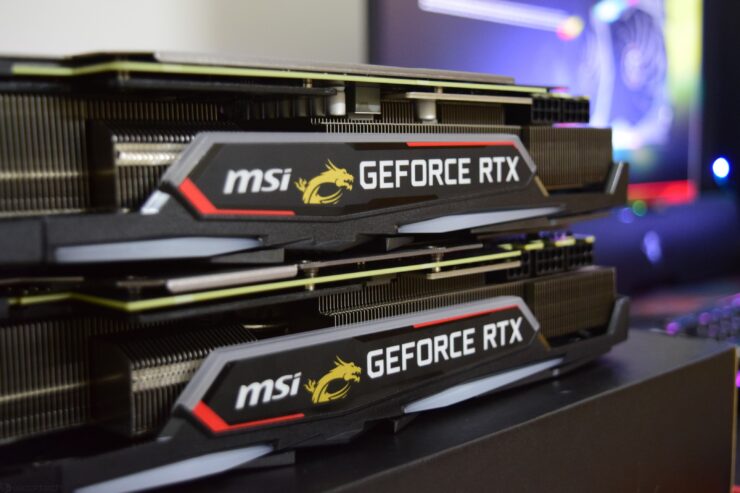