MSI's Twin Frozr VI heatsink may look compact but it's actually a monster in disguise. It measures 290mm (length) x 140mm (width) x 51mm (height). The cooling extends all the way to the back of the PCB and it requires a casing with good interior space for proper installation.

It is recommended that a case with 2.5 free slot space is required for proper functioning of cooling on this card. The card also weighs in at 1257 grams which is a whole lot of stress for the PCI-Express slot. But all that heft load means that the card packs a good bunch of components with an emphasis on quality. 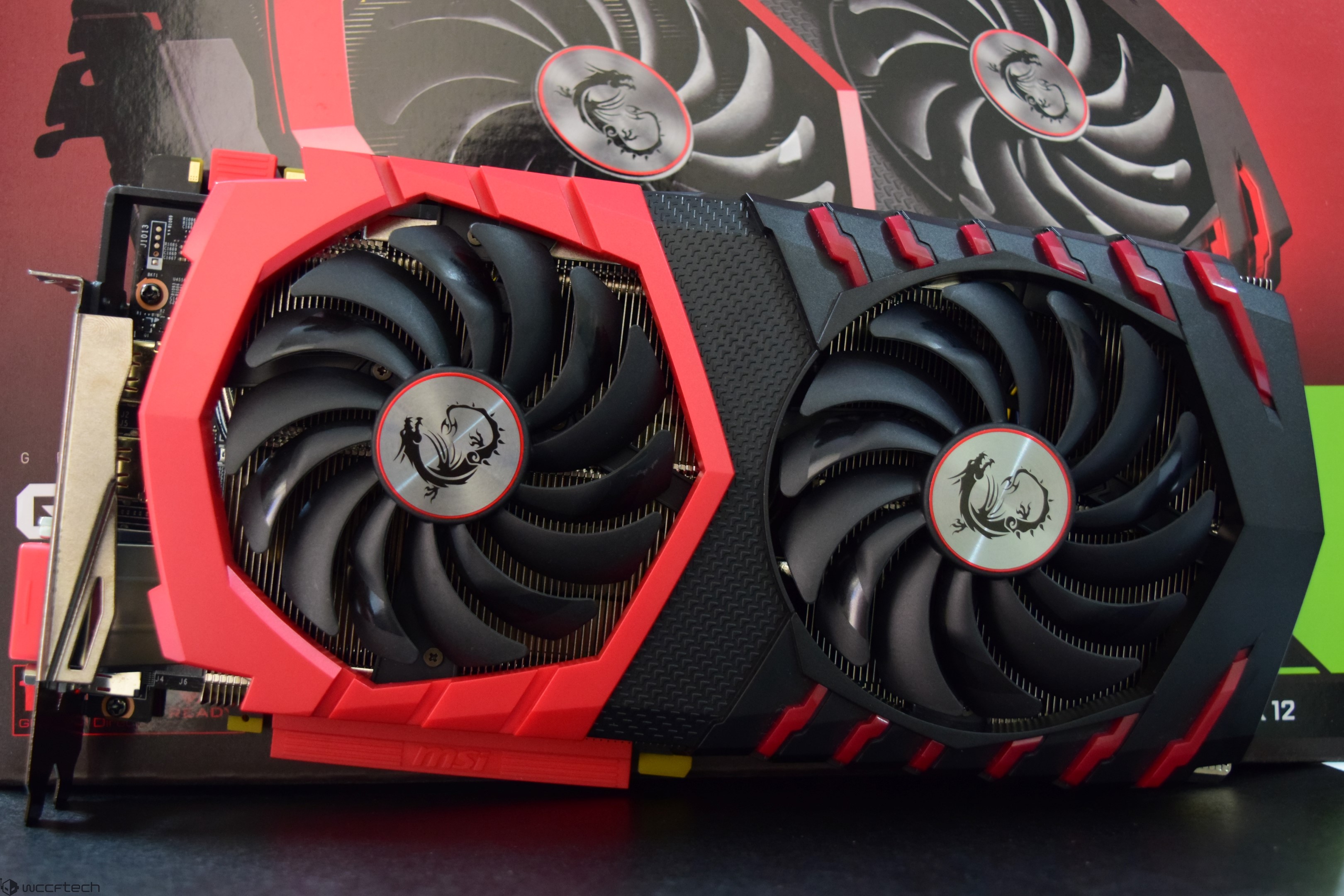 In terms of design, we are looking at an updated version of the Twin Frozr heatsink which is now in its sixth variation. The new heatsink looks absolutely phenomenal with a red and black design and dragon claws featured on the back of the card. It's one beauty to look at.

The card has two fans on the front, all of which are 100mm and come with MSI's patented Torx 2.0 fan design that offers 22% more air pressure, allowing for increased air flow and cooler operation of the card itself. 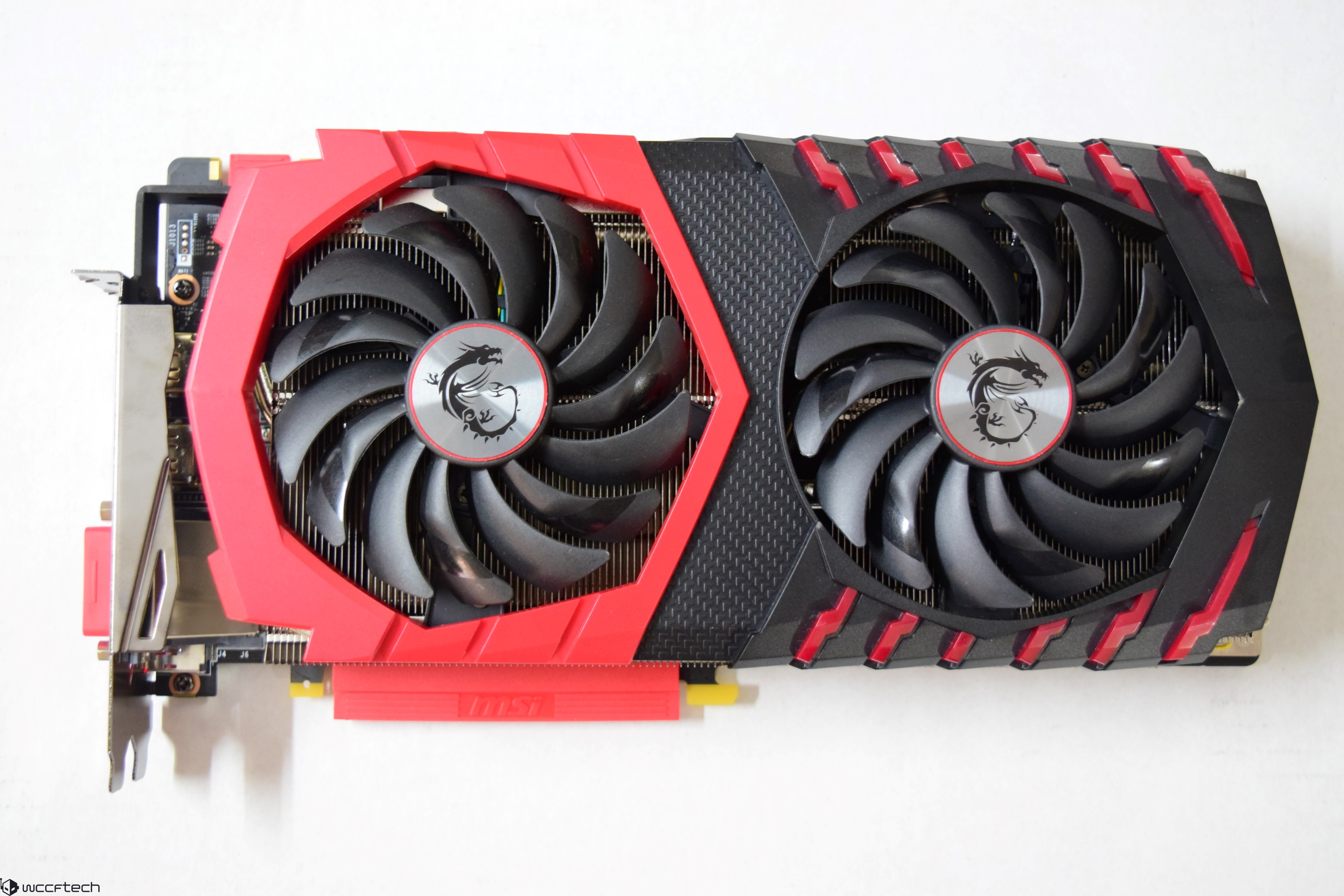 On the back of the card, we spot an extremely good looking MSI Dragoon backplate. The whole plate is made of solid metal and adds to the durability of this card. The matte black finish on the backplate gives a unique aesthetic and has the Dragoon logo at the end which looks great. There are cut outs in screw placements to easily reach the points on the graphics card. 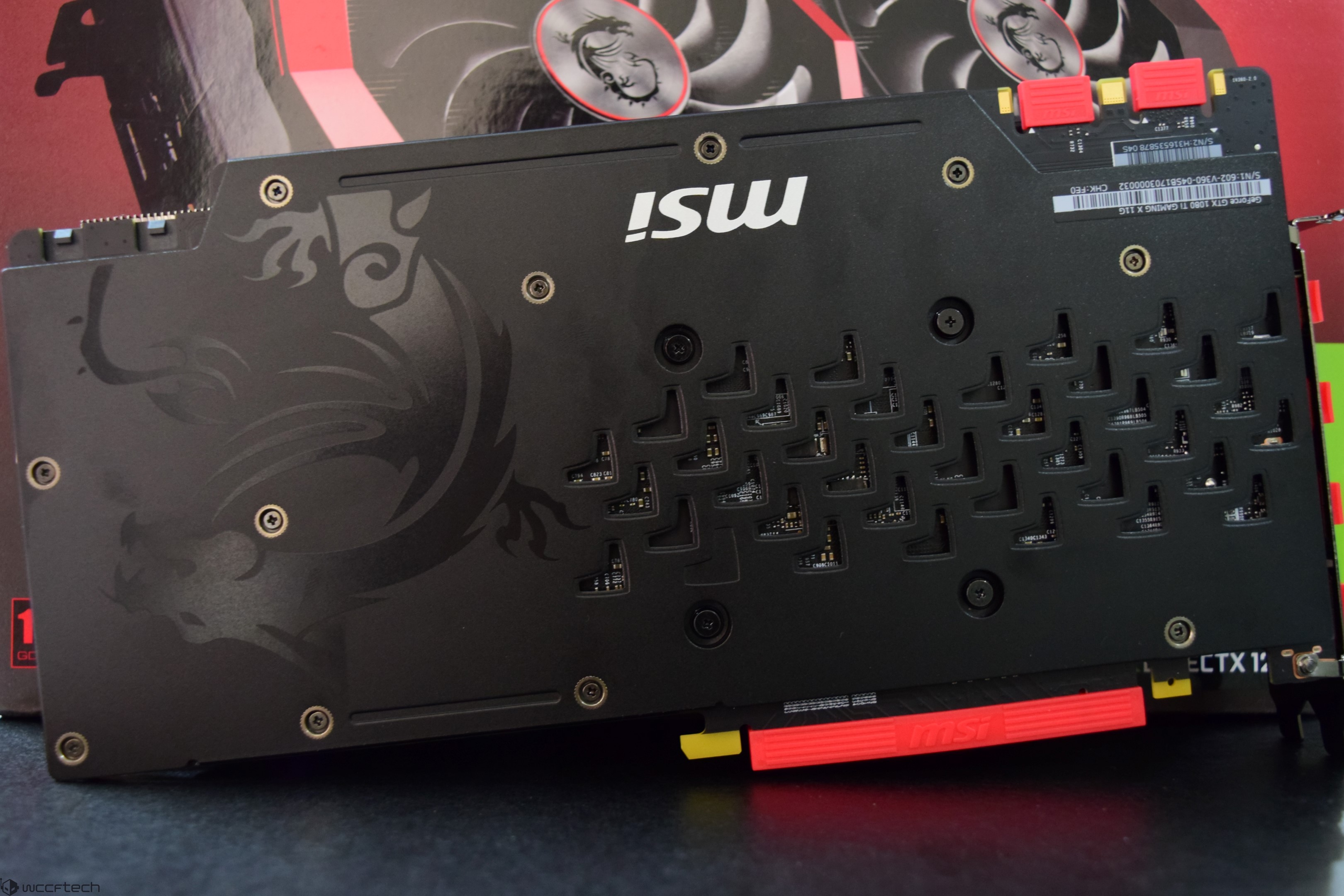 Coming back to the fans, the card actually features two different fan designs based on the Torx 2.0 system. The first fan uses a dispersion fan blade technology that has a steeper curved blade that accelerates airflow and as such increases effectiveness in keeping the GPU cool. The second fan is more of a traditional one which pushes down a steady build of airflow to keep the heatsink cool. Both fans deploy double ball bearing design and can last a longer time while operating silently. 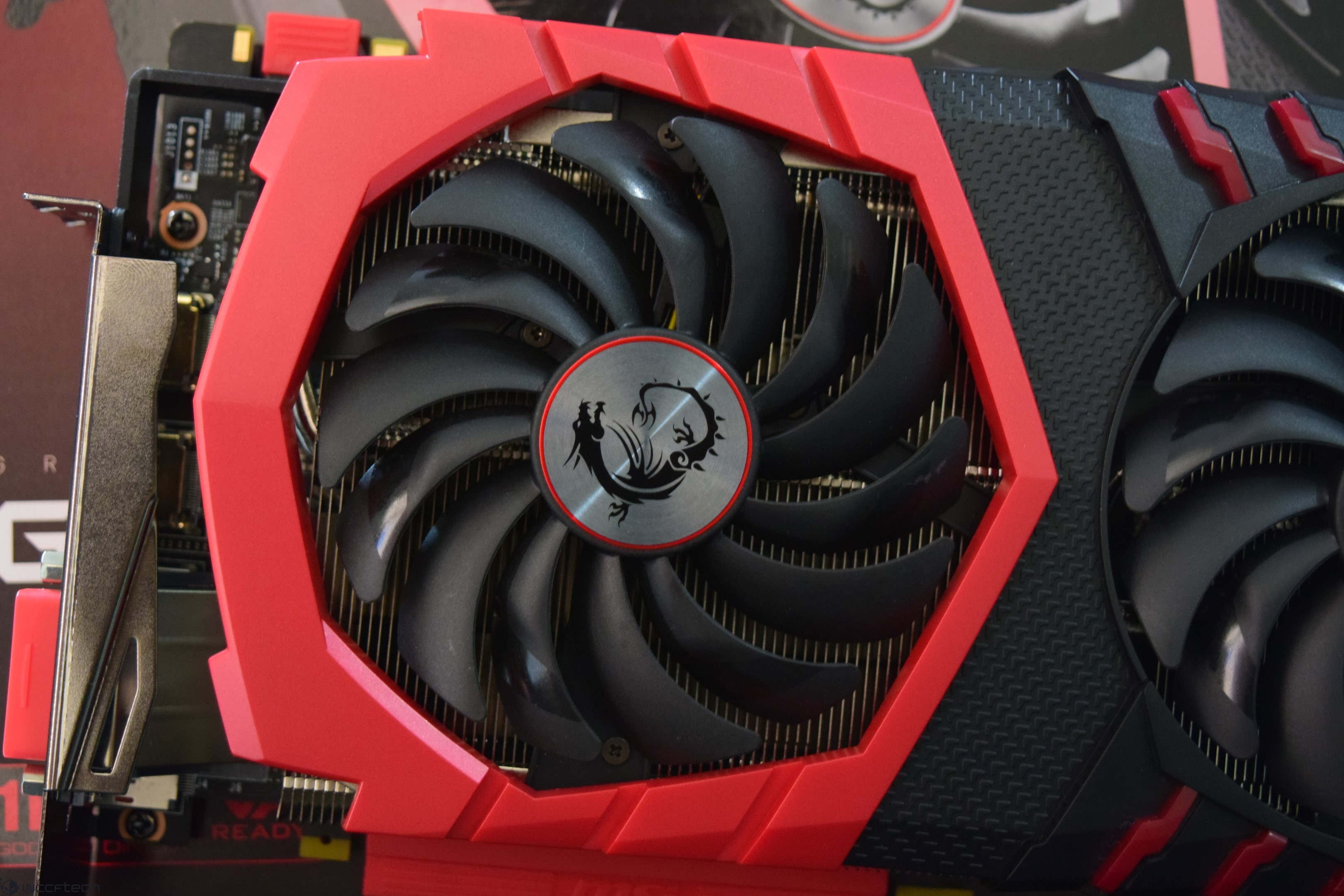 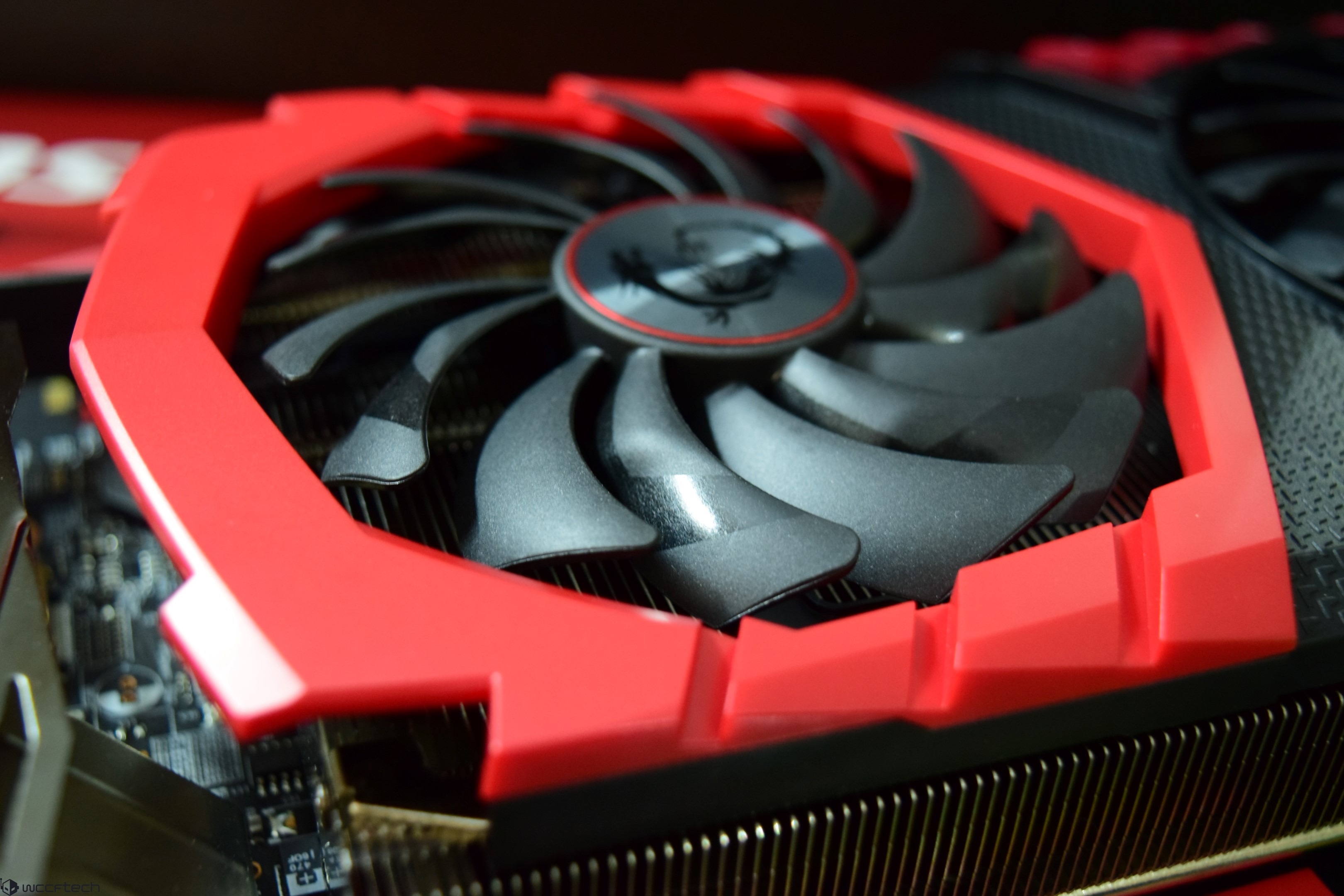 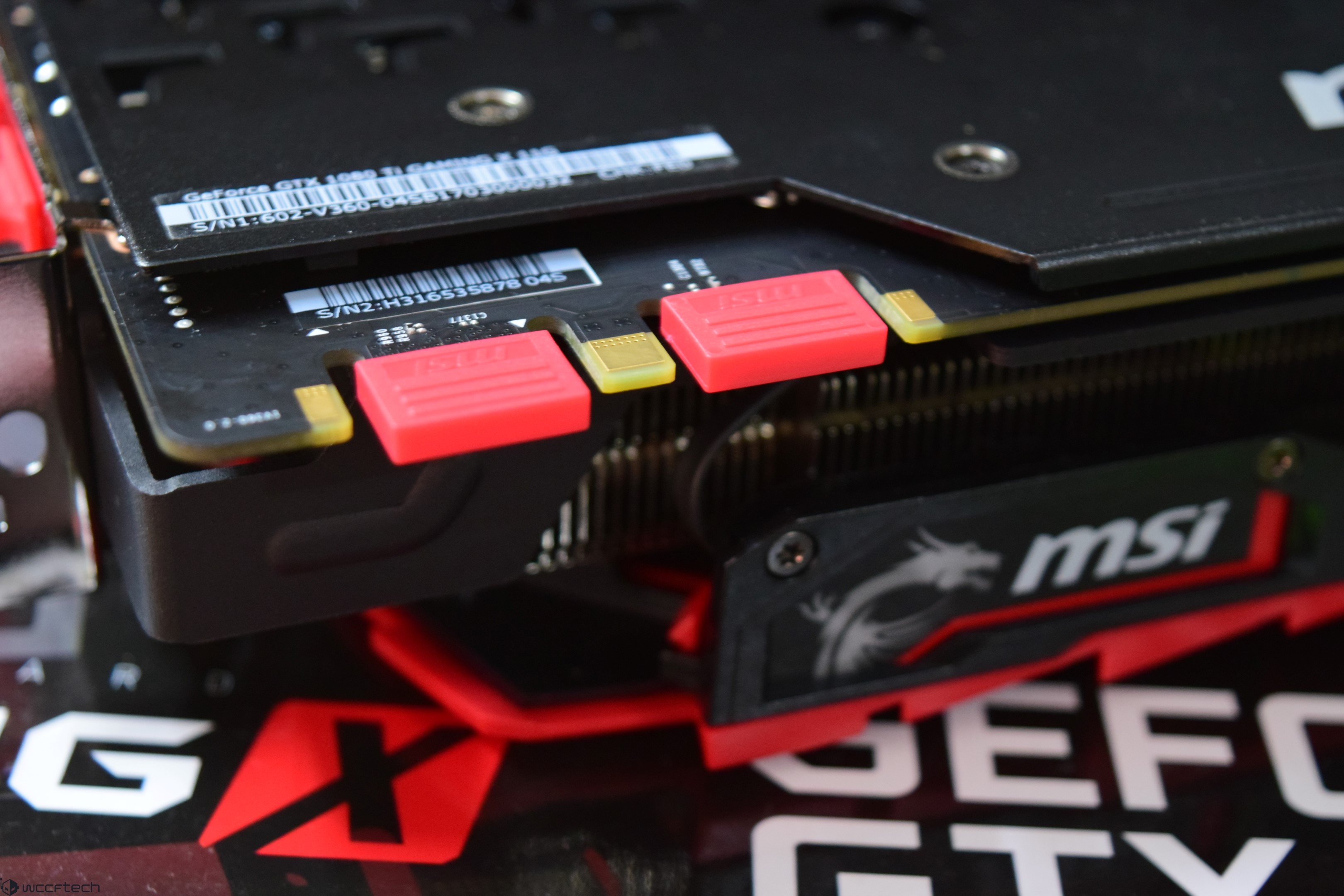 Display connectivity on the MSI GeForce GTX 1080 Ti Gaming X includes two Display Port 1.4 (4K @ 120 Hz), two HDMI 2.0b (4K @ 60 Hz) and a single DL-DVI which means that it is capable to support all next-gen displays with new standards such as HDR, VR and multi-res / multi-screen panels. 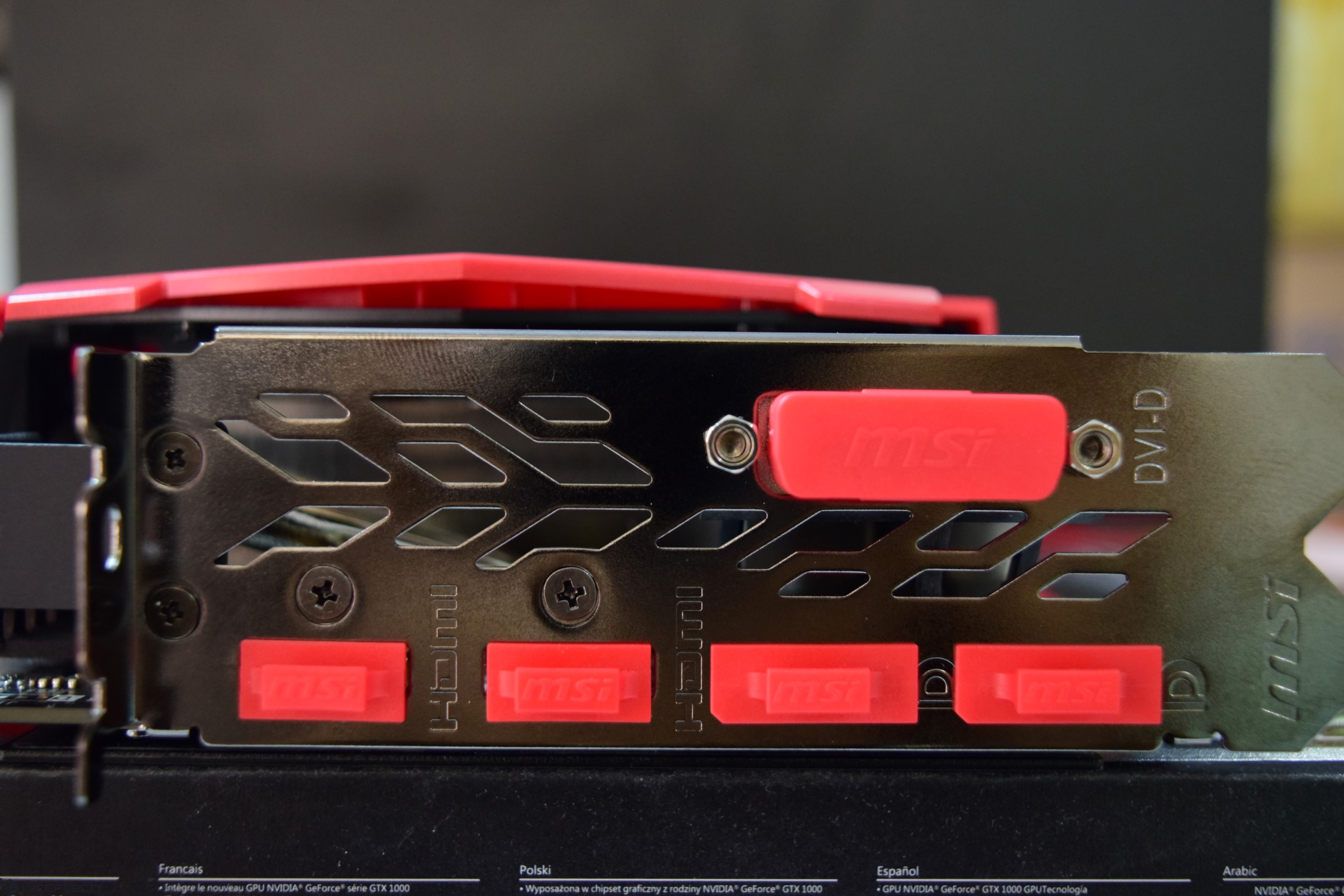 The MSI GeForce GTX 1080 Ti Gaming X features a custom PCB which means the power circuitry is entirely non-reference. Power is provided through a dual 8-Pin connector configuration which means we are looking at a maximum power input of 300W. The card has a official TDP of 250W but the premium components make sure that every bit of juice gets supplied to core, memory and VRMs when overclocked. 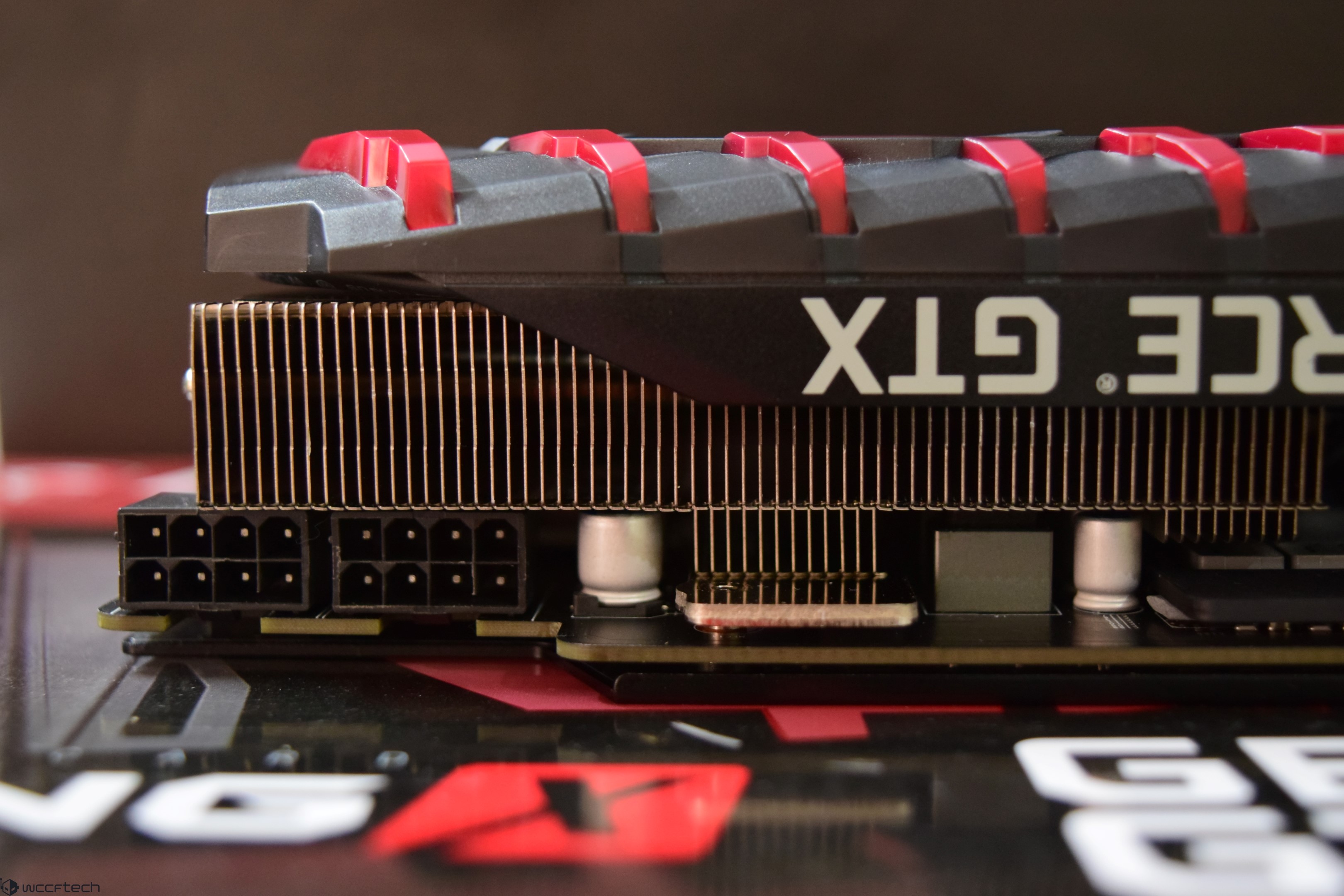 MSI has fused the Twin Frozr VI heatsink with dragon blade accents. These red colored patterns emit RGB LED lighting and you can configure them through the MSI Gaming App. These are part of the MSI Mystic LED system that is incorporated within a wide range of their gaming products. 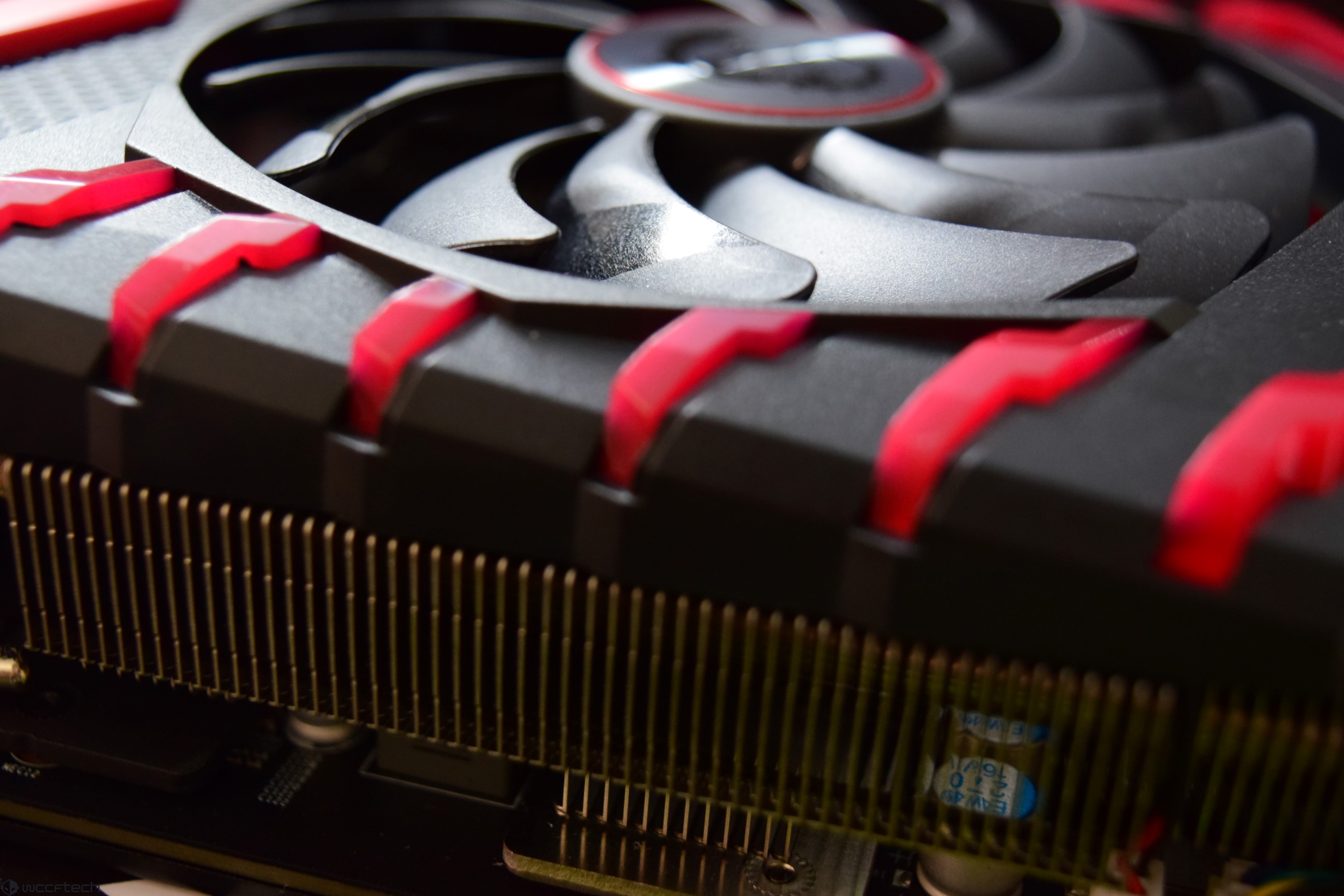 The MSI and Dragon logo on top of the SLI connectors also features LED Lighting which can be configured through MSI's Gaming App. The labels are inverted so when you plug the graphics card inside your PC, they will show up straight rather than upside down. 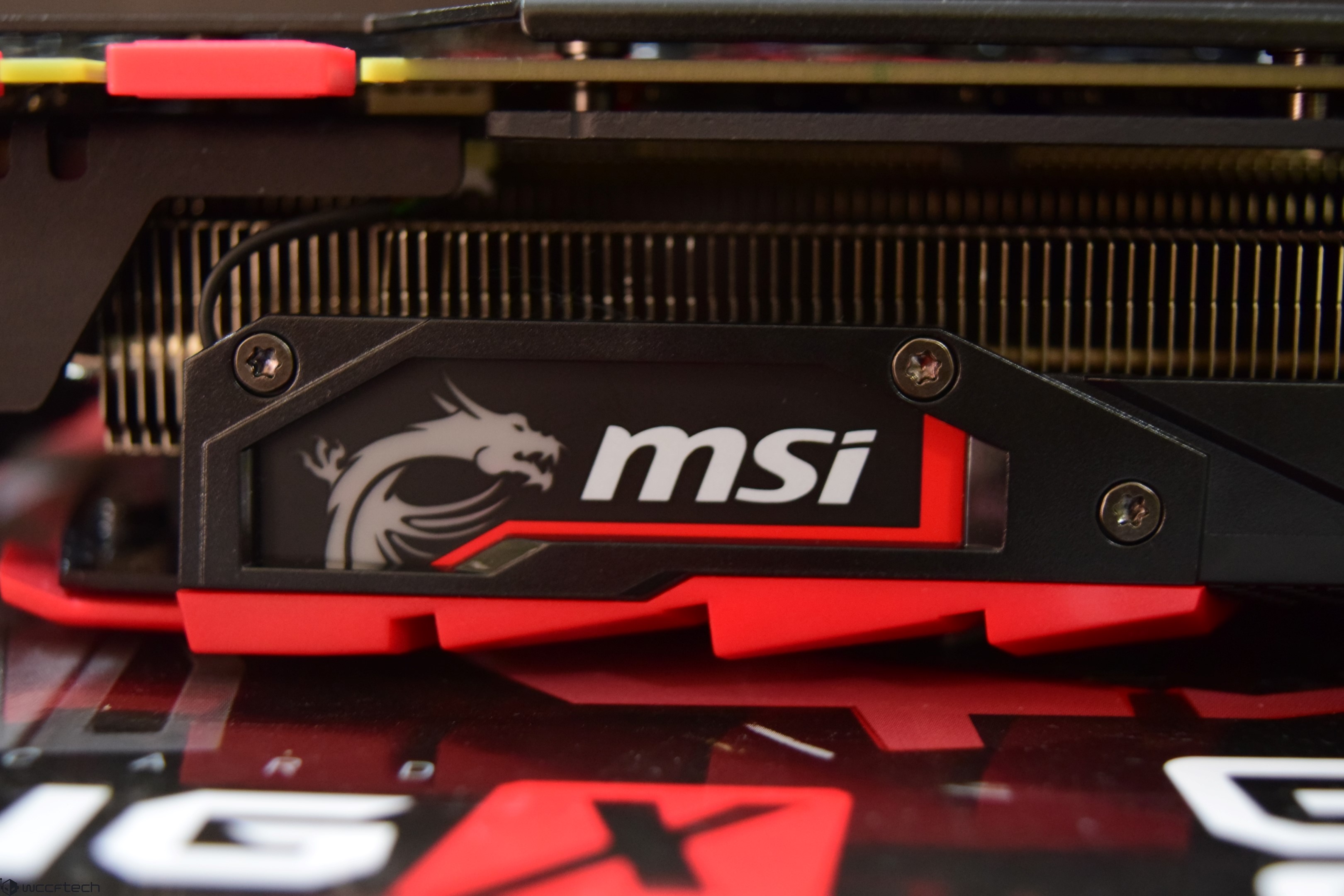 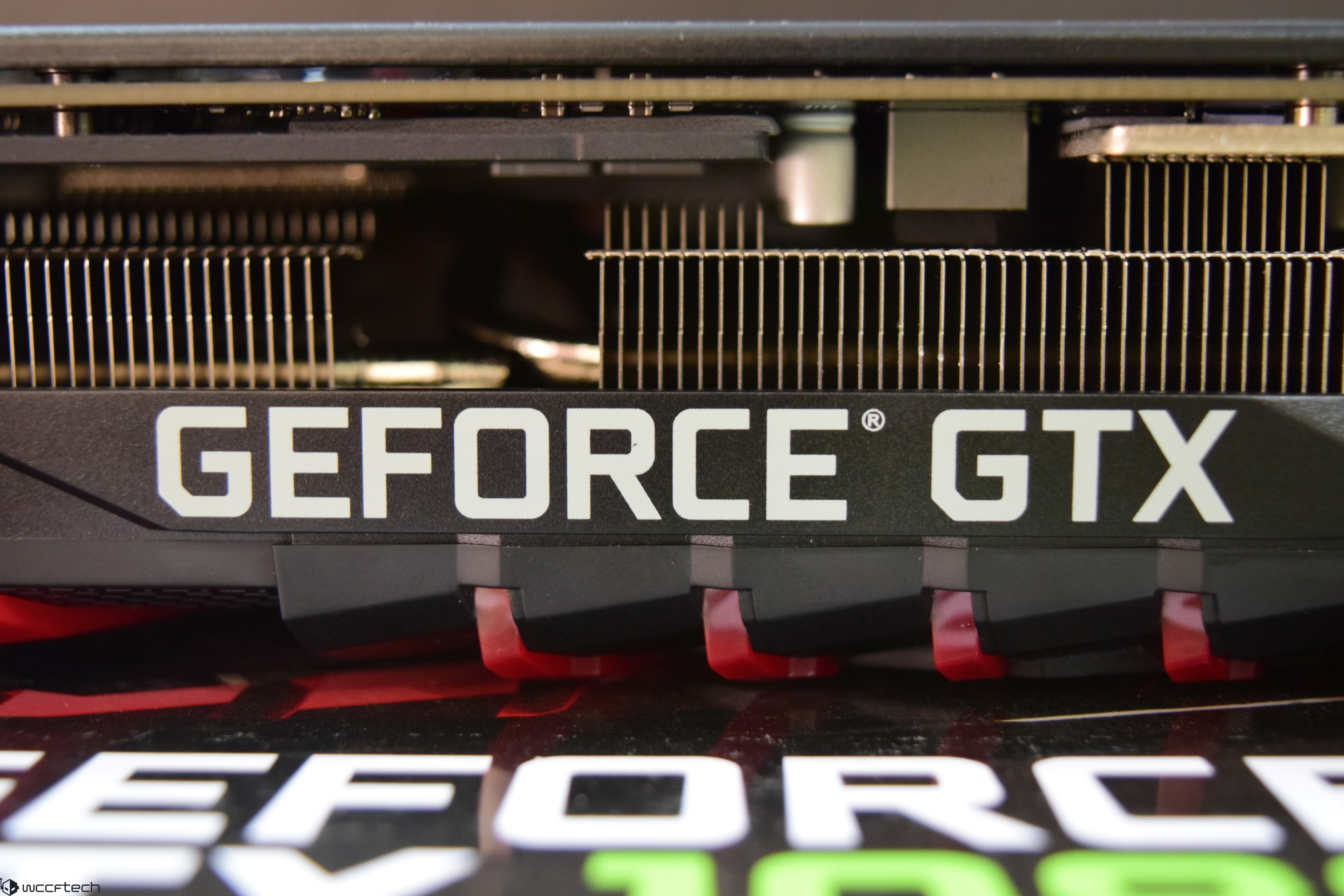 As far as cooling is concerned, the fans do their job well but the real heat is handled by the might heat sink block inside the MSI Graphics card. The Twin Frozr IV heatsink is based on five 8mm thick copper heat pipes that offer direct contact to the GPU when running through the copper base plate. The GPU base plate is a solid nickel-plate copper design with loads of surface area for efficiency dissipating heat load. MSI says that they are using a premium thermal compound on their GTX 1080 Ti Gaming X cards so we will see if they do a better job than the other 1080 Ti we tested. 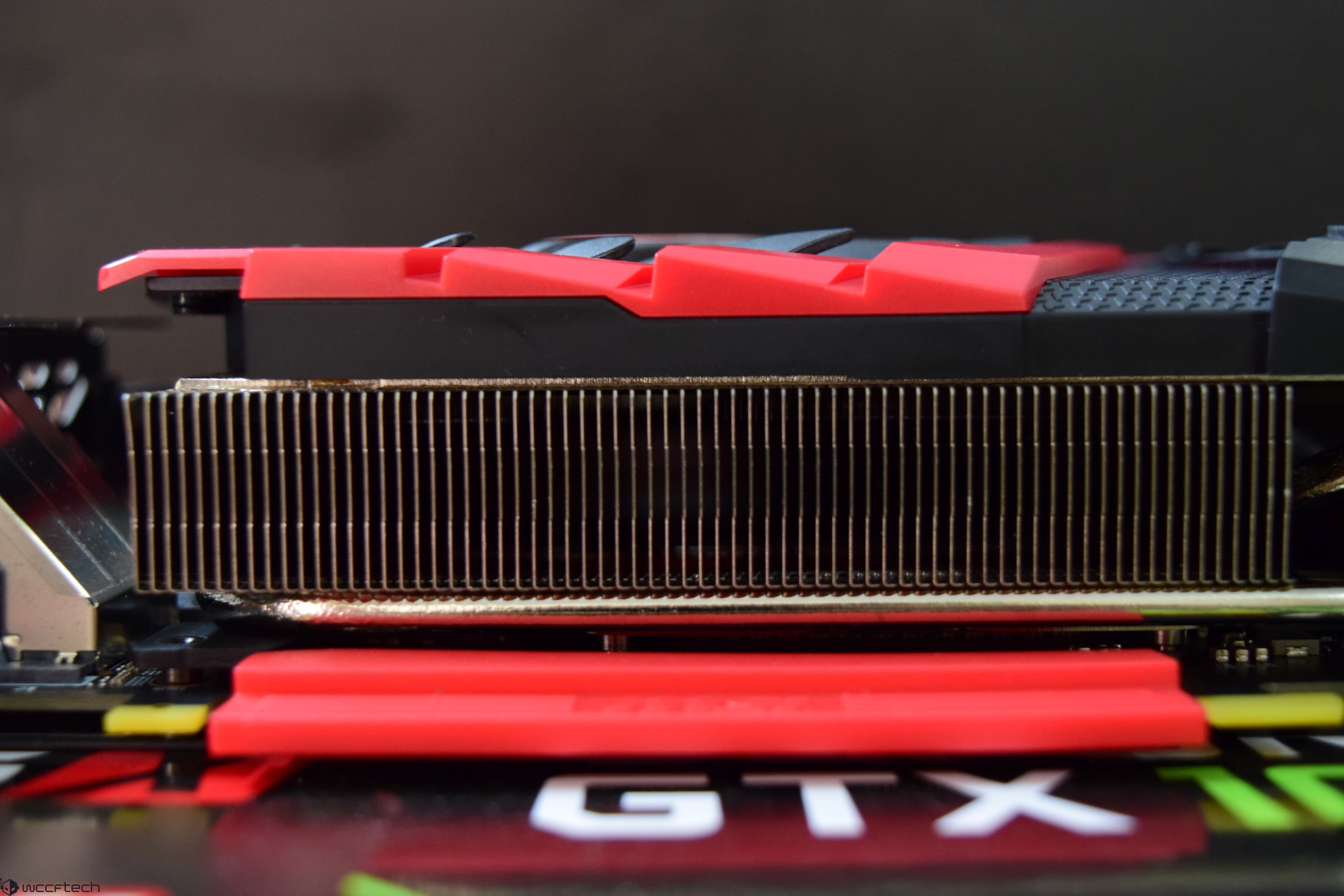 MSI adds extra protection to their impressive PCB by including a rugged anti-bending plate. This also acts as a memory cooling plate while the PWM heatsink with micro fins keeps the VRM cool under stressful conditions. MSI makes use of a 8+2 phase PWM design that includes their Military Class 4 components such as Hi-C Caps, Super Ferrite Chokes and Japanese Solid Caps. 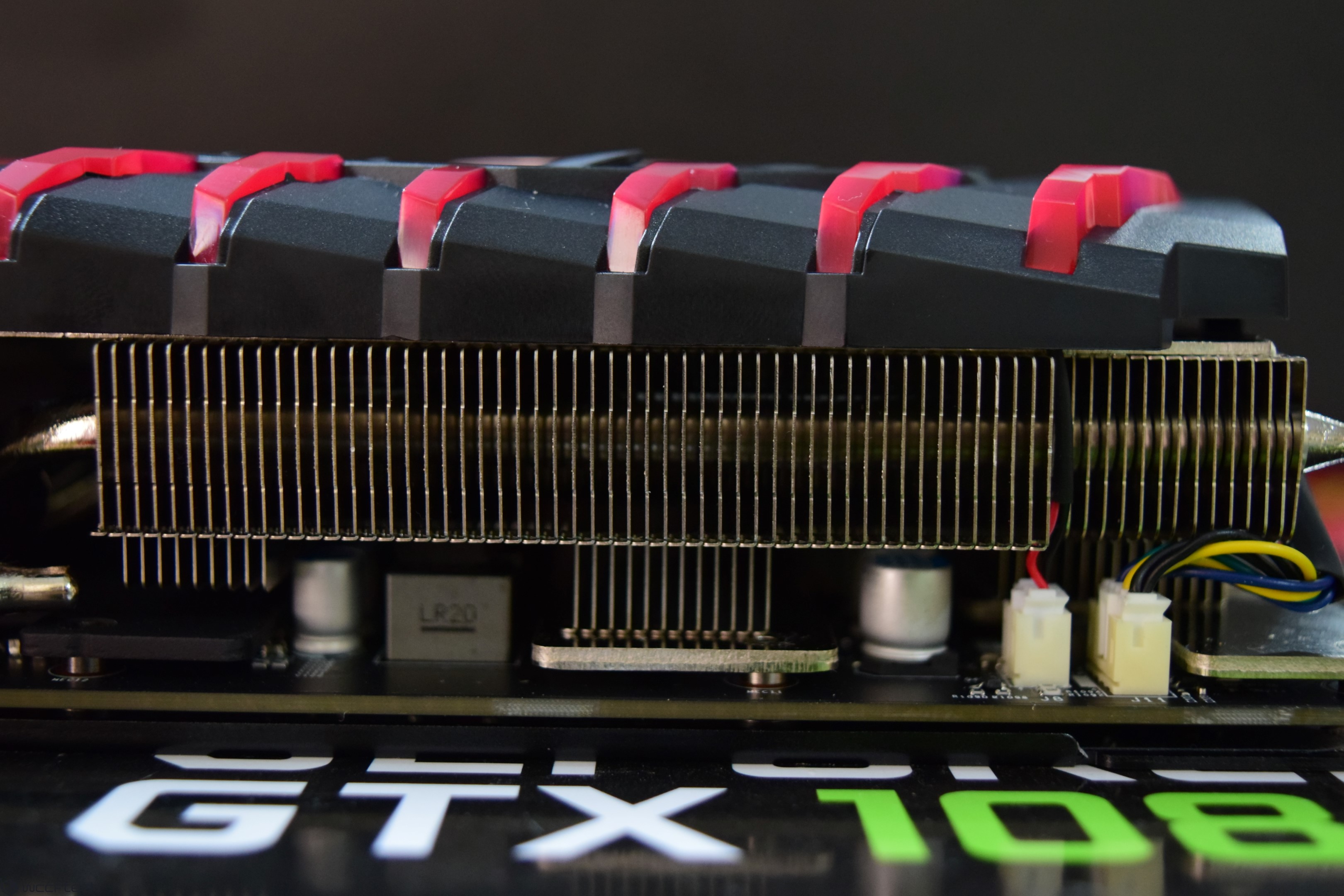 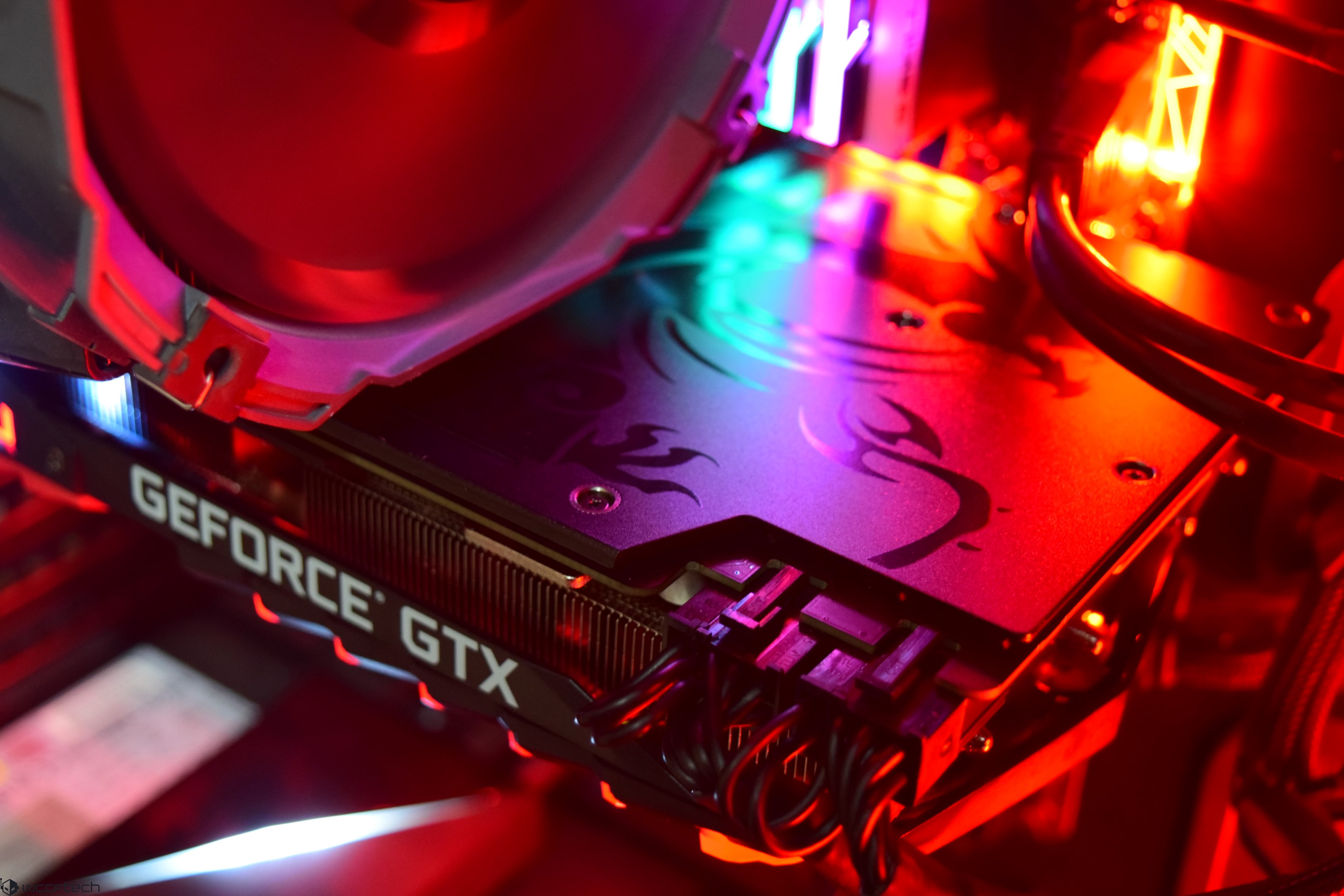 Following is a look at the different lighting modes that this card is able to display with the MSI Mystic Light lightning feature.