A few times in the past, I've said how difficult it is to write a review of a game that I've recently previewed. The same can be said for a game where the final product doesn't really differentiate from the preview version in any great and meaningful way. Knowing this, you may imagine that my impressions of MotoGP 21 are still very much my thoughts about the game now. If that is the case, your imagination would be correct.

With the sporting world in upheaval thanks to COVID 19 and major sports having only recently gotten back into the swing of things, it's been the prime period for games to truly capitulate on the situation, put their best foot forward and grab more fans. eSports have been front and centre on major sporting channels, with some of those rewards being felt after the return of live sports.

You're likely wondering why I'm talking about all of this. First, shut up, stop asking questions. Second, it's because I don't have much about MotoGP 21 that I haven't already said. Third, it's because this has been the prime time for Milestone to push this annual franchise to the next level, giving it the chance to lure in an even bigger audience.

I'm going to say that they haven't. This doesn't mean that Milestone hasn't improved MotoGP 21; they just haven't pushed it to a level that could truly take it to that next level. The key problems with MotoGP 21 and the others before it are accessibility and balance. Okay, it has other problems, but it always seems that as soon as you make the games of this series more accessible by turning down the settings, the game itself seems to spit its dummy out and say, "Oh, you want it easy, do you. Well, here you go, you are now glued to the track, and the AI have brains made out of puréed gerbils."

Well, MotoGP 21, I don't want that. I want to go around a bloody corner without falling off or slowing down to the pace of a lazy sloth. Also, I still want a bit of challenge. I have the problem that while I can ride a motorbike in real life, I'm not that great at riding them in video games. I understand how it all works, but it's just hard for me to manage in the digital medium. That's the same for any vehicular simulation - I like a more simcade approach.

MotoGP 21 is certainly closer to simcade when you fine-tune every setting to the Nth degree, so there is that. In reality, this and the core new features are all for the people who come to MotoGP 21 for the simulation, for the realism. Some of the new features really add to this realism too. Rather than simply appearing back on the track after a fall, now your rider will get back up and run back to your bike, picking it up. Also, if you're not the best at corners and cut a few, you'll be given a long track penalty, which is even more awkward because that extra bit of track is even narrower!

It's a shame that this isn't as accessible as some of Milestone's other racing games. It takes too much effort to get it even to RIDE 4's level of accessibility, which is irritating because this feels better on the track than RIDE 4. They've improved the physics and A.N.N.A has gone to school to improve the AI. Not a good school, and she's still clearly been eating crayons, but still a school. 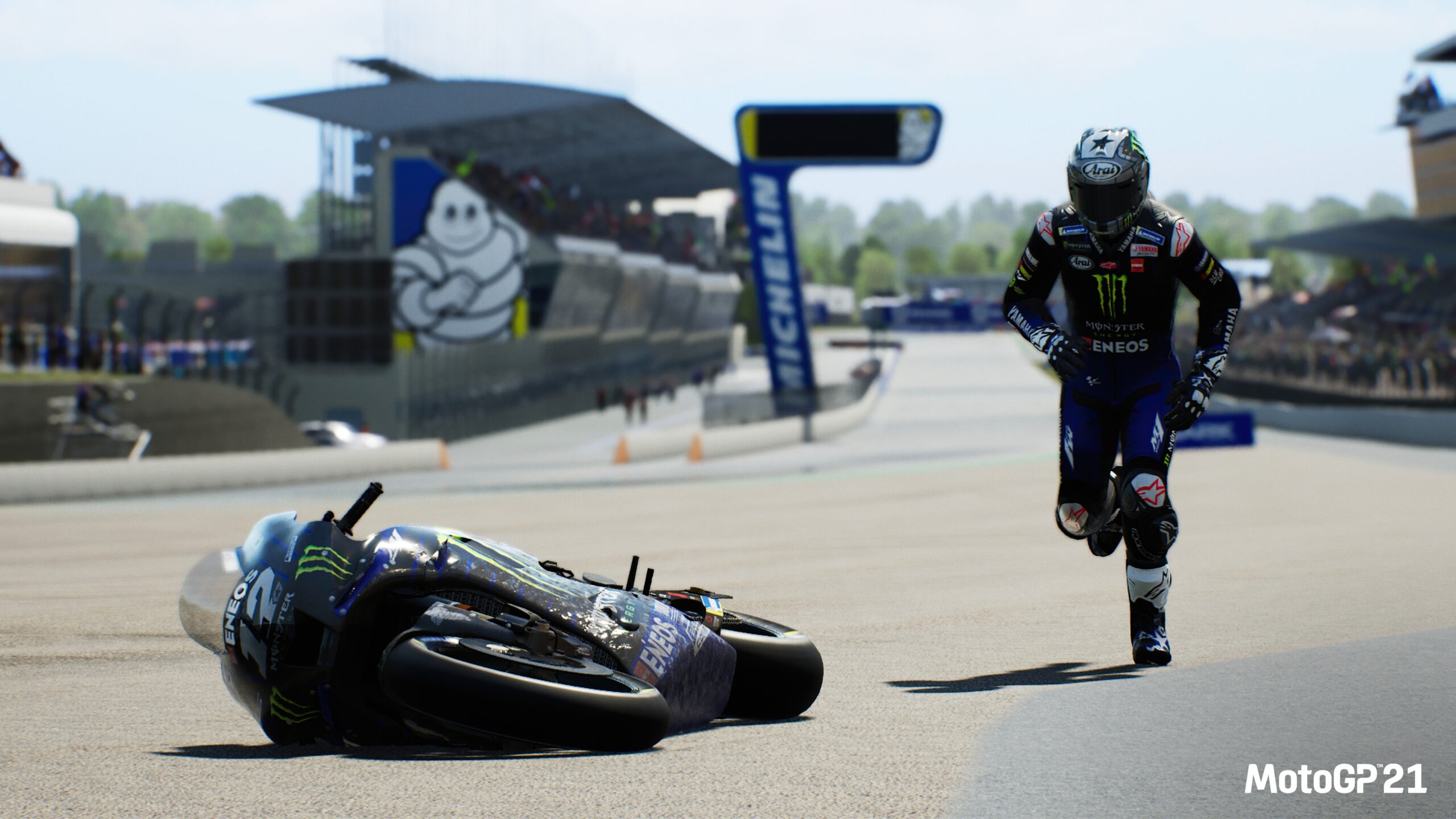 Speaking of school, MotoGP 21 and the series could seriously do with giving the players a bit of schooling. If you're already familiar with this sort of game and you've mastered the finicky bugger, then using your different brakes and how to use your bike will already be familiar. Those of us new to the style of game, or just a bit rubbish, can find each entry and its slight changes like a whole new mountain to climb. A bit of easing in from a more detailed and explanatory tutorial would be fantastic. Just don't bring in those preposterous checkpoint tracks from RIDE 4.

What about the game beyond the tutorial? The one thing I didn't get to talk about when previewing MotoGP 21 was the campaign. This is where the series is still lagging behind other racing competitors. You can start as part of a Moto3, Moto2, or MotoGP team, or you can create your own team and fight your way to the top. The problem is that the progression feels a little shallow. To be specific, it's the progression of your team that feels shallow.

Even compared to other titles by Milestone, the R&D objectives to help push your bikes and team to the next level are shallow. If you compare them to far better series like Codemasters' F1 games, it's night and day. While the campaign is extensive, and it's great to see and feel that progression from Moto3 all the way to MotoGP, it doesn't feel as rewarding or as involving when what's going on behind the scenes feels a little token. So while the career mode is decent enough, that's the best to be said about it. It's decent enough.

It's at this point I feel I should mention that I feel like a bit of a race traitor. Nothing inappropriate, just that I've been playing MotoGP 21 on the PlayStation 5. I've been complaining that there's no reason to turn on that behemothic plastic paperweight. So, turn it on I did. Once I figured out how. Again. I mention this because honestly, this looks great on the PS5 and runs as smooth as you could want. The real features come with the DualSense and honestly, I'm surprised by how good the haptic feedback and adaptive triggers are, with the controller genuinely giving you a taste of the struggle you can have when fighting a bike as the controller fights to get out of your hands. Keep these settings on high though, it kills the effect if not.

The strange thing with Milestone is that they are improving. It was only four years ago that, in my review of MotoGP 17, I stated that the game was barely qualifying. I gave it 5.5/10. For every improvement in physics and visuals, there are also slow, sometimes stumbling steps forward in aspects like your character running back to the bike (a little too slowly) for realism. These steps forward often highlight a little too much the areas that are lagging.

I'm no head of a gaming studio, so maybe what I'm saying is far off. I'd be happy to be corrected. What I think is that Milestone is spreading themselves too thin, trying to meet too many demands. Annualised titles like MotoGP, Monster Energy Supercross, and MXGP, are often joined by a fourth title, with other multi-year titles in the works, such as the upcoming Hot Wheels Unleashed. Even three annualised titles alone would be difficult, but adding to this more development seems to me that they're working above what they can honestly manage if they want to push their games to the same league as Codemasters.

After all of this, is MotoGP 21 worth it? If you've liked the other MotoGP games, it's those but better. That's often enough. Honestly, it's probably enough here. However, unless effort goes into improving what happens behind the scenes, improving the career and making it more impactful, this is a series that will stagnate. This day is not that day, though. What I will say is that MotoGP 21 is a good new entry into the series; it's more than worth it for fans of the style of game, but don't expect an easy ride if you're new in.

MotoGP 21 is yet another slow, tentative step forward for the bleary-eyed series. There are clear improvements visually, with the physics, and with a few new features to aid realism. However, for every improvement, some areas are showing their age or have abandonment issues. The tutorial is as absorbing and educational as a brick wall, the career mode just feels shallow, and finding that balance for non-simulation purists can be a chore. Still, these are balanced by the strong racing when you find those perfect settings and the improving AI. Also, the use of the PlayStation 5's DualSense controller is brilliant, putting the feel of the bike into your hands.