The Monster Hunter series took a long time to truly blow up in the West, and it was only with Monster Hunter World that it became a true worldwide phenomenon. This isn't really surprising, considering the series has been pretty much a handheld affair for much of its existence, and World was the first home console exclusive release in a very long time.

With the series' handheld and home console releases now being equally successful, it was not surprising to see Capcom bring their features together on Nintendo Switch with Monster Hunter Rise. Releasing a console exclusive Monster Hunter game may have been a weird choice, in light of World's massive popularity, but one that did pay off, as Rise is one of the finest entries in the series ever released, even with its flaws. The game is such a good one that it managed to make someone like me, who never really managed to get into any previous entry in the series, a fan. And the excellent PC port only made things go smoother.

Street Fighter 6 Has Just Been Rated in Asia

Like pretty much every previous main entry in the series, Monster Hunter Rise is very light in terms of story, as what little of it is in serves only as an excuse to embark on quests to kill or capture monsters. In the game,  players control a fully customizable hunter from Kamura Village who has to take part in the village's defense from the Rampage led by Magnamalo, a brand new monster that feeds upon the other monsters in the horde to become more powerful. Including almost all of the additional content released so far for the Nintendo Switch version, the new PC release doesn't end as abruptly as the 1.0 Switch release did, featuring a more complete experience. And while the story doesn't do a lot to elevate Monster Hunter Rise from its predecessors, the game's atmosphere certainly has a distinct, colorful Japanese flavor that feels great, especially compared to the more subdued tone of Monster Hunter World.

Like in previous entries in the series, the Monster Hunter Rise experience pretty much boils down to accepting mostly monster-slaying quests that take place on different maps. In Rise, finding monsters has been streamlined considerably, as their location is highlighted on the map straight away, so players can either go straight to them or explore around to get some materials first.

Combat is clearly the star of the show in Monster Hunter Rise, featuring an incredible amount of depth. Each of the game's big monsters has its different combat behavior and moveset, which can be neutralized or even taken advantage of differently depending on which of the 14 weapon types are used. These range from some of the series mainstays like the Sword and Shield, Great Sword, and Long Sword to others that have been introduced more recently, like the Insect Glaive and Hunting Horn. Each weapon comes with a different gameplan that dramatically influences how any monster should be approached: the Long Sword, for example, comes with a variety of counterattacks that can be used to fill up the Spirit Gauge to unleash more powerful attacks; the Great Sword is a powerful yet slow weapon that requires perfect knowledge of a monster's moveset to attack without risking getting interrupted; the Sword and Shield allow the user to use items without sheathing the Sword and block attacks with the Shield, making for a more balanced weapon that is easy to pick up for newcomers. All weapons can also use two different Silkbind Attacks which require Wirebugs to be used that further expand their unique playstyles. Monster Hunter Rise is also the first entry in the series that allows players to customize the moveset of all weapons via Switch Skills, adding yet another layer of depth to the experience.

Monster riding has also been overhauled with the Wyvern Riding mechanics, which allow hunters to ride monsters once they have been attacked multiple times with Silkbind attacks or if another monster inflicted enough damage. While riding monsters, it is possible to unleash various special attacks that can make hunts considerably easier, given how powerful some of these attacks can be, compared to the hunter's weapons.

With all these intricacies, it can be difficult for newcomers to start enjoying Monster Hunter Rise right from the get-go, despite the game doing a slightly better job at easing players into the experience than previous entries. Monster Hunter Rise, like previous entries in the series, requires commitment. Sure, one may be able to take down a monster by hitting it over and over randomly, being baffled at how they do not seem to react to the damage too much, but this will hardly feel satisfying. Learning how to use a weapon's unique capabilities to take down monsters properly and stylishly is the true joy of Monster Hunter. This is the same in Rise, even though taking down a monster is generally pretty easy to do in Village Quests.

As already mentioned, Monster Hunter Rise does a pretty good job at making every moment of the monster-hunting experience enjoyable. Exploring the maps has become even more fun thanks to the introduction of the Wirebug mechanics. This allows players to quickly zip from one place to another and launch in the air. With the proper Wirebug usage, it will also be possible to run on walls and take advantage of the fantastic verticality featured in all of the maps, opening up some new hunting strategies, especially for long-range weapons. If the player prefers to stay on the ground, however, they will not find themselves limited in any way, as they can ride the new canine companion, the Palamute, to traverse distances very quickly. The Palamutes, alongside the Palicoes, accompany the hunter in combat as well, providing much-needed support that makes it easier for solo players to complete both Village and Hub quests.

Not that support is needed in Village quests, as they are quite easy to complete.These feel more like a tutorial for Hub quests, which are considerably more challenging, especially for solo players. Hub quests are also continuing to get expanded with new Event Quests, so those looking to enjoy the game with their fellow hunter friends will be busy for a very long time.

While most of the tweaks and changes introduced in Monster Hunter Rise make the experience slightly smoother than in Monster Hunter World, not all of the new features are on the same level of quality. Rampage Quests, where hunters need to defend Kamura from monster hordes by lightly managing a stronghold and building defense mechanisms, aren't particularly fun, and they feel more like a chore, especially as a few of them must be completed to move the story forward. In addition, hunters looking to make the perfect build will be forced to complete them, as Defense Tickets obtained as a reward for completing Rampage quests are required to unlock Rampage Skills for weapons.

It isn't just the Defense Tickets that make the life of hunters wanting to optimize their builds the best way they can hard in Monster Hunter Rise. The Talisman system, which allows hunters to create Talismans sporting certain skills, is made frustrating by the fact that you may not always get the best results. On the other hand, armor customization is way more reliable, as the Decoration System allows players to craft Decorations that can be used to decorate High Rank Armor to improve skills. While a little grindy, as you will need plenty of monster parts to craft these Decorations, this system is definitely more satisfying than the chance-based Talisman creation system.

Having been originally released on the Nintendo Switch console, Monster Hunter Rise doesn't look as good as Monster Hunter World, although the different art direction makes the differences between the two games less aggravating. A less-demanding game, which still looks good thanks to the amazing RE Engine, however, means that most PC players will not have trouble running it at high framerates. The game supports 30, 60, 90, 120, 144, 240 framerate caps as well as unlocked framerate, and a moderately powerful system will have no trouble running it at above 60 FPS. The machine used for the test, powered by an i7-10700 CPU, RTX 3070 GPU, and 16 GB RAM, had no trouble running the game at 4K resolution, stable 120 frames per second at high to max settings.

The fact that Monster Hunter Rise runs so well isn't the only thing that makes it one of the best console-to-PC ports we have seen in recent times. The game features ultrawide support and tons of different graphics settings, ranging from a High-Resolution Textures toggle to multiple shadows options, including Dynamic and Equipment shadows,  Level of Detail settings, and Anti-Aliasing options, and more. The game also does a great job of providing information on how each setting impacts system performance thanks to Graphics Memory Usage and CPU Load indicators, which make tweaking all the settings to achieve the best balance between graphics quality and performance incredibly easy.

Monster Hunter Rise goes a long way to streamline many of the most annoying aspects of the series, at the cost of some of the complexity seen in older games. The pros of this streamlining process, however, far exceed the cons, making Monster Hunter Rise the perfect game for those who never really got into the series, but still want to give it another chance. Even more so on PC, thanks to one of the most solid ports we have seen in a long time. 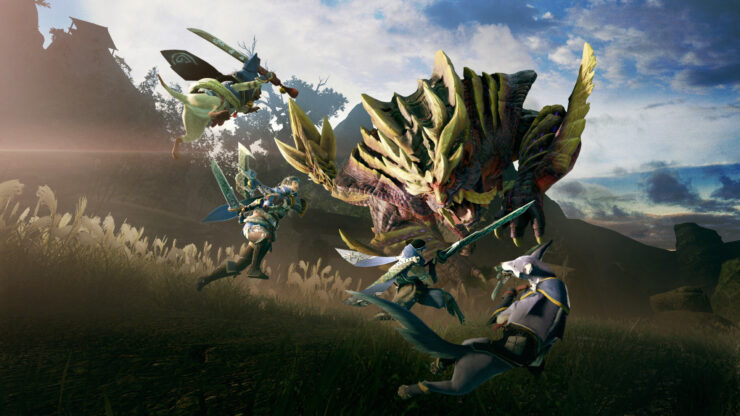