Monster Hunter is no longer a niche franchise. Handheld fans have been enjoying more and more games and there's been a steady increase in popularity for years, but the mainstream breakthrough we saw from Monster Hunter World was entirely unprecedented. It’s for exactly that reason, why you can feel comfortable categorising the kinds of players that will be looking into Monster Hunter Generations Ultimate.

The first kind will be the veteran Monster Hunter player. You’ve likely already played Monster Hunter Generations on 3DS and earlier games in the series, and all you need to know about Generations Ultimate is if it plays well and is worth jumping into if you’ve already gone through Generations.

Another kind of player will be those that are coming over fresh from Monster Hunter World. World, being a very different (and much kinder) game, will make for a great jumping in point for the series, but you might not be prepared for how hardcore and unforgiving earlier games can be.

And then, finally, you’re a Monster Hunter virgin. You’ve heard all about the series and the hype about World, and now that it’s coming to Switch you’re curious about giving things a go for yourself.

No matter which of the three players you are listed above, you will find loads to enjoy in Generations Ultimate - it’ll just be easier for some of you to enjoy than others.

Let’s start at the beginning for those new to the series. Monster Hunter is a game where you explore a fairly vast overworld - which is cut into sectioned chambers here - all while gathering materials and hunting dinosaurs, essentially. Things will start small, with you wielding a meagre sword and shield against small enemies, and will escalate to you swinging a giant hammer to pound down on beasties worthy of a main spot in Jurassic Park. Giant prehistoric-looking creatures, all ready to be killed and cut up for parts, basically.

The gameplay loop in Monster Hunter sees you picking a quest, and then heading out into one of the several open areas in order to complete your victory requirements. These could be gathering herbs or mushrooms, ores, or even parts from certain enemies. There are also more typical hunting quests, of course, where you must simply hunt a large beast or two.

As you complete quests and hunt, you’ll gather a large number of materials, which you can use to craft items from an absolutely massive list, which includes potions to use on yourself, and traps to use on enemies. Other items and materials will go towards forging new weapons and armour. There isn’t really a traditional level up system in Monster Hunter, nor is there really experience - it’s about the gear you bring into battle. You literally wear the spoils of battle on your body, making you more powerful as you go.

And that power you wield is, of course, tied to your weapon, and there are multiple weapon types to get to grips with. Swords and hammers are obvious, but things like Kinsects, Bowguns, Switch Axes and far more make for an incredibly varied combat system since each weapon type comes with a unique move set. It’s somewhat limited compared to what was seen in World, but still incredibly large and varied, since this game has with it all of the small advances that have been made in the series throughout its sequels. Add to each weapon the different combat styles you can choose from, and of course the elements that can be infused into your weapons and armour, and the variations you can bring into battle feel near limitless.

And, just like World, Generations Ultimate is best played with friends. You can have three friends join you for either online or local play, and you can smash through enemies as a team. It makes larger, more difficult enemies much more tolerable and manageable when you’ve got a coordinated team working with you.

But even without playing with any friends, you can enjoy Monster Hunter Generations Ultimate completely with just the single player content. Of course, it’s still primarily a single player experience, and there are so many quests and monsters to sink your teeth into that you’ll struggle to get through it all. Unless, of course, you’ve done most of it before.

That’s where the Ultimate subtitle comes in. This is, after all, technically an enhanced version of a game we’ve seen before. Monster Hunter Generations came out on 3DS a while back, so we’ve already had plenty of time to get into most of this content. And if you’re a player that’s been there, done that? Well, you can actually transfer your save data over to the Switch version of the game. That means even if you’ve smashed all the way through Generations already, you can take your character and gear with you, and go straight for Ultimate’s extra content.

And is that content worth it, if you’ve already played Generations? Actually, yes, absolutely. Heck, if you have put enough hours into Generations to claim to have done everything, then you already know you’ll enjoy Ultimate, don’t you?

Add to that the Switch port and, well, it becomes a very good package. It’s possibly the biggest Monster Hunter game in terms of content, and being able to play the game in HD, with new textures, on the TV or on the go feels revelatory. Things I squinted at on the 3DS are now clear and vivid, and make the experience more enjoyable to play and look at.

Textures aren’t amazing everywhere, and the fact that it is formerly a 3DS title is frankly obvious thanks to some low-poly geometry, but in motion these things are easily ignored, and the speed of loading between areas on the Switch makes these segmented areas much more tolerable than they may have been on 3DS. Oh, and of course, being able to use a proper controller set up is a pretty big bonus, too.

If you’ve come over from the home console game, you’ll find loads to love in Monster Hunter Generations Ultimate, but the slightly aged graphics and rougher control system might put you off. It’s not as fluid or easy to enjoy as MHW, but that’s certainly not to say it’s not worth it. If you take your time and adjust to the older style of Monster Hunter, there’s loads to enjoy.

The only player that might have gripes with this game is, frankly, the Monster Hunter virgin. If you’re alien to the franchise still, jumping into the most complex and largest game might be a bit overwhelming. That’s not to say it won’t be worthwhile, but it’s a bit like a fighting game - you need to put in a good few hours just to learn the basics and learn from your mistakes. Some players won’t want to spend time doing that, and Monster Hunter Generations Ultimate won’t be for them.

So, should you play Monster Hunter Generations Ultimate? Almost definitely yes. This is the biggest, and debatably the best Monster Hunter game, finally in HD, with extra content, and a much better control scheme than what you’d get on even the nicest 3DS. It looks better than ever, plays better, and has so many more monsters than you can shake a switch axe at. 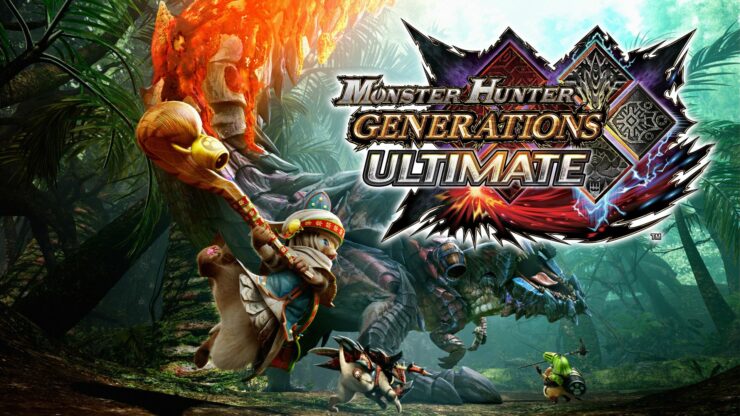 Monster Hunter Generations Ultimate is one of the best entries in the series and well worth playing for fans. Players new to Monster Hunter might find it difficult to get along with at first, but stick with it and you’ll find an engrossing, valuable hunting experience.